By the time Brendan Rodgers was sacked as Liverpool manager in October 2015, his reputation had taken quite a hit.

Now back in England with Leicester City after a trophy-laden spell at Celtic, he has the opportunity to re-establish his reputation in a league among some of the most sophisticated tactical minds in football.

Despite bringing the Reds to the brink of Premier League supremacy, he exited Anfield with his tail between his legs.

Of course, cringe-inducing documentaries and a Ross Geller-esque gleam to his teeth didn't help, but it always seemed as though the David Brent persona, fashioned through countless memes on social media, was harsh on a man who, until now, came as close to lifting the Premier League trophy as any Liverpool boss.

It's also easy to forget why Liverpool appointed Rodgers in the first place. Having worked as a coach under José Mourinho at Chelsea before managerial stints at Watford and Reading, Rodgers fashioned a reputation as a rising star during his two years at Swansea City.

Appointed Paulo Sousa's successor in July 2010, Rodgers was slightly fortunate in that he arrived at the Welsh club with many of the tenets of his tactical philosophy already in place. Under Roberto Martínez and then Sousa, the Welsh club had established their own tribute act to the tiki-taka philosophy which was very much in fashion thanks to Spain's triumph at that summer's World Cup.

But sprinkling his own ideas of expansive football and quick defence-to-attack transitions produced excellent results, achieving promotion to the top flight via the playoffs in his first season at the helm.

Swansea became media darlings with the brave, attacking football espoused by Rodgers key to the club's ever-improving image. He made astute additions, too, signing Scott Sinclair – whom he had coached at youth level for Chelsea – and Neil Taylor.

Recognising the need for a hungry young finisher and a promising, if unproven left-back (Taylor arrived from non-league Wrexham) proved critical. Sinclair scored 24 goals in all competitions while Taylor became a regular fixture in the line-up, both helping lift the Swans into the Premier League for the first time.

And Rodgers wasted little time in enhancing his reputation once they got there. After beating former side Reading in the Championship playoff final, he promised to carry over Swansea's verve and swagger into the big time.

Top-flight clubs soon found out he wasn't joking. Rodgers guided Swansea to 11th in the top flight, attracting plaudits for their bold approach. There were great highs, too, like a thrilling 3-2 win over Arsenal at the Liberty Stadium, outclassing the Gunners with the short-passing, precise brand of football that came to define Rodgers' time at the club.

They passed, they pressed. They were a nightmare to play against but a joy to watch. Passing became shorter and more triangular while the wide players became more intelligent with their movement into space. It was all about control and cohesion.

There were also image-boosting wins over Manchester City and future employers Liverpool. Rodgers captured the imagination at Swansea, revolutionising how the team played, thought and were thought of. A free-flowing and forward-thinking unit, his Swansea remain, to this day, one of the most meticulously prepared sides to have been promoted to the Premier League.

Even at Liverpool, when it soon became clear replicating his Swansea model would be near-impossible, he adapted. In his first year at Anfield, he was idealistic to a fault. But he sacrificed his attachment to a possession-based approach and turned Liverpool into a blistering counter-attacking unit, harnessing the extraordinary speed and skill of Luis Suárez, Daniel Sturridge and Raheem Sterling.

And the 46-year-old can revive his tactical reputation at Leicester. There are similarities between the current Foxes crop and the side he built at Swansea. In Ricardo Pereira and Ben Chilwell, he has at his disposal two of the most promising full-backs in the division.

He also has experienced heads in defence, players who can retain possession and create in midfield, and one of the most accomplished finishers in Jamie Vardy. There is also a clutch of promising young talent, with Demarai Gray, Harvey Barnes, James Maddison and Youri Tielemans chief among them.

Tielemans, an astute player in possession, may find himself with a key role under Rodgers while Barnes, Maddison and Gray have the potential to create a fluid, dynamic trident behind Vardy, much like Sinclair, Nathan Dyer and Gylfi Sigurðsson behind Danny Graham at Swansea.

In Maguire, Rodgers will find an adventurous, ball-playing centre-back not too dissimilar to Kristoffer Ajer. 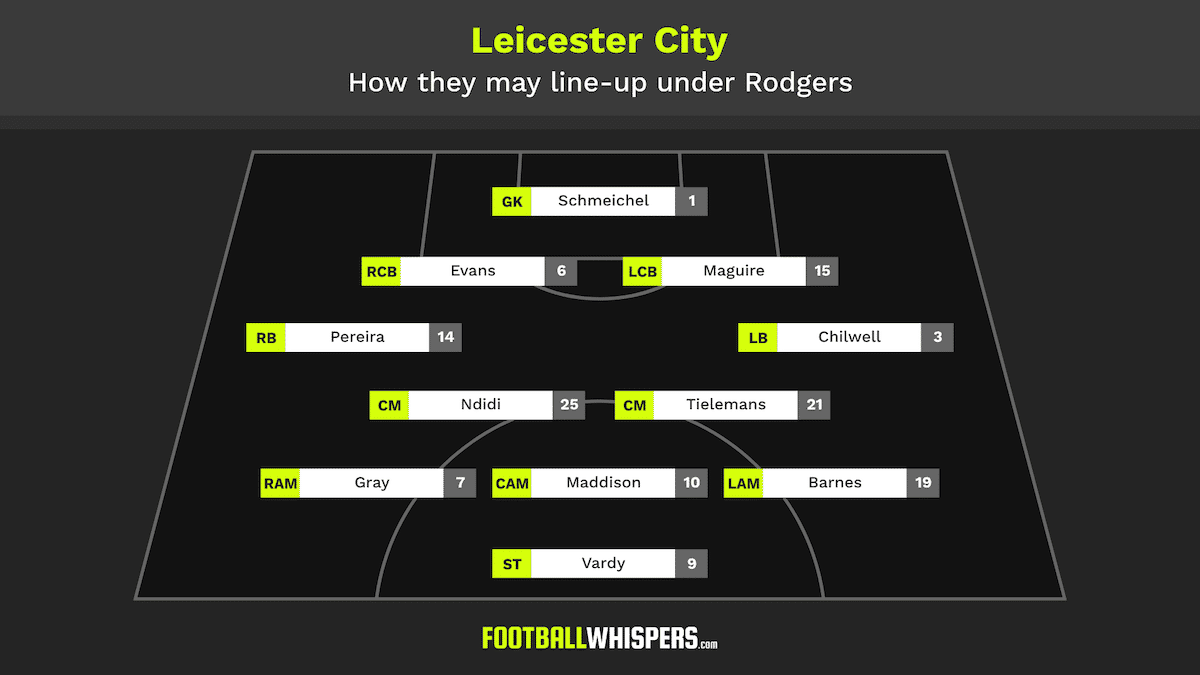 In a way, Leicester have done a reverse-Rodgers. A searing counter-attacking beast under Claudio Ranieri, they became a more possession-focused team under Claude Puel. Counter-to-possession as opposed to possession-to-counter.

And while Puel's intentions were commendable, there was always a sense that he was never fully on the same wavelength as his squad, always fighting a disconnect and always – it seemed – on the brink of losing his job.

It will take some time for Rodgers to overhaul the side in a tactical sense but he can build a foundation by ending an increasingly dispiriting campaign on a high. He is renowned for his abilities as a man-manager – Steven Gerrard said he was the best he'd ever worked under in this regard – and can use this to galvanise a talented-but-under-performing set of players before utilising pre-season to drill, drill and drill some more.

In many ways, Leicester is the ideal gig for Rodgers. They don't represent the suffocating pressures of a top six side but remain an ambitious, vibrant club that want to play the type of football on which their new manager built his reputation.

They also have an extremely talented group of players – with an average age of just 25.8 – who, with clear direction, can dream of challenging for European football once again.

On Rodgers' appointment, Chilwell said via Sky Sports: “Yesterday I bumped into him in the corridor and he was pointing out things in my game he felt he could improve. That's music to my ears.”

It's difficult to imagine anything Puel says being music to anyone's ears. Leicester haven't kicked a ball under Rodgers yet but his mere presence has already given the players a lift. Exciting times ahead then. For him and them.