Almost 12 months ago Brendan Rodgers was facing questions over his Celtic future. At that stage, he was being touted as Arsène Wenger's successor at Arsenal. Yet the Northern Irishman claimed he wasn't ready to leave Glasgow.

“My genuine love is improving players, making them better, helping the club improve,” he told the Mail on Sunday. “So do I go somewhere where I might have six games… that wouldn't make me happy.

“I'm in a position where I'm in my dream job. As a guy from Northern Ireland who supported Celtic and worked in football, I'm living my dream.”

Rodgers is a smart man, though. And he has learnt from previous mistakes when dealing with the media. So he immediately added in a caveat to those comments.

“I want to work through until I'm 60 and get to a thousand games. I probably know I won't do the other 500-odd games here at Celtic.”

Which brings us to the present day. Rodgers' time at Celtic appears to be over, and far sooner than many would've anticipated. According to numerous reports, he is prepared to leave the club mid-season and take over at Leicester City.

It is certainly a curious situation.

Rodgers' side are on track to complete the ‘treble treble', a clean sweep of Scottish football's domestic trophies in each of his three seasons in charge. He has also previously pledged to guide Celtic to ten consecutive titles, a feat which would eclipse Rangers' – and their own – record of nine in a row.

Leicester, meanwhile, are 12th in the Premier League. The Foxes, who sacked Claude Puel on Sunday, will not be relegated yet are unlikely to achieve much else of note this season.

Mid-table mediocrity. Top-flight stability. They are certainly not easy to achieve in the ever-changing landscape of English football. For Leicester, though, it is no longer enough. Their 2015 title win, a fairytale success, changed the club's reality. The expectation now is they should be in the top echelon of the Premier League, season in, season out.

“Once they get their act together it's actually not a bad club,” Peter Schmeichel, father of first-choice goalkeeper Kasper, told French media last week. “Leicester have good players, but they don’t have the manager who can get the best out of them.

“Once they’ve got all that sorted out, you’ll see Leicester in fifth to eighth place, where they belong.”

That, you imagine, is the attraction for Rodgers. Nudge the Foxes a few positions up the Premier League and he will be deemed a success. His CV enhanced once more. His ego massaged. 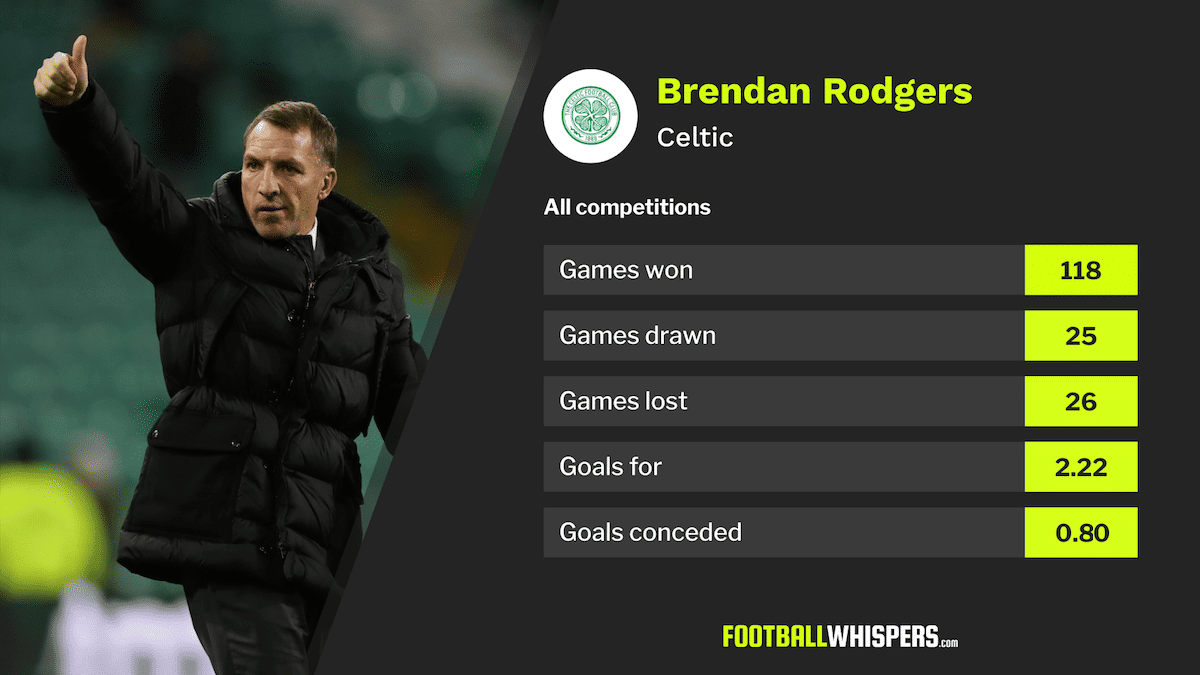 Rodgers' decision to depart mid-season has, understandably, angered Celtic fans. He was one of them; a supporter in the dugout. A man who wouldn't walk away with his job only half finished.

That he has chosen to do so indicates two things. The first is perhaps his affection for the club wasn't as deep as publically claimed. And the second is clearly not all is well behind the scenes at Celtic Park.

Rodgers admitted in January the Bhoys' business the previous summer weakened his squad. That Celtic had to resort to loan deals to rectify the problems in January was hardly ideal. It simply papered over cracks and delayed the need to find solutions.

“It’s pretty clear at this moment in time that we are under strength from where we’ve been in the previous two seasons,” the 46-year-old explained in July.

“We have to bring in players that are going to improve the squad, rather than just add to it. That takes finance and that takes money. Until we can do that, I’ll work with the players we have.”

Rodgers also hinted prior to the campaign getting underway he didn't have the final say when it came to signings. He claimed transfers “were not his job” and reiterated his role was to improve the players in his squad, nothing more.

And yet, despite his mild irritations with the board, and the odd flirtation with the Premier League, a departure at this stage of the season was largely unthinkable.

So why has Rodgers, whose legacy will now be forever tainted, opted to leave now? And why are Leicester ready to pay £6million to bring him to the King Power Stadium?

Rodgers has his faults – and his management techniques have been questioned – but as a pure coach, a developer of young talent, there are few better in the British game.

“For me it's about a football vision and it's about the opportunity,” Rodgers explained in an interview with The Boot Room, the FA's online hub for coaches. “You can build a belief and conﬁdence in a player. I always think the player plus the environment equals the performance.

“If you have a player who wants to learn and you put them in an environment that allows you to be creative and build, then you hopefully get the performance level.

It's this outlook which is undoubtedly why Rodgers has been coaxed away from Celtic by Leicester.

The Foxes have, in the last two years, spent big on young talent – Wilfred Ndidi and James Maddison, for example – while also emphasising the development of their own; Hamza Choudhury and Harvey Barnes have both featured in the first-team this season.

Puel gave these players opportunities but there is an argument which suggests they didn't improve under his watch. Rodgers, meanwhile, has a track record of honing and nurturing talent. Let's not forget it was he who gave Raheem Sterling his chance at Liverpool.

The Foxes are also something of a blank canvas. When they clinched the title, Leicester were a slick counter-attacking side. Puel tried to move them away from that but never truly succeeded. The result is the side lacks identity, produces drab performances and struggles to score goals.

Rodgers' football philosophy is counter to that. While he isn't wedded to one system, and has shown his willingness to compromise in the past, his overarching outlook hasn't changed since his days at Swansea City.

“It is very much about positive football. If you want to deﬁne it: we like to play attacking creative football but always with tactical discipline. The template for all of our work is our organisation.”

Rodgers will prove a smart appointment for Leicester. He ticks many of the club's boxes and also has a track record in domestic cup competitions, another area where Puel failed.

But there will now forever be an asterisk next to his name at Celtic. He was the coach who achieved so much but left when on the cusp of history. A man who gave up his dream job just when it was building to a fitting finale.