A clash between the bottom two is never going to be filled with top drawer talent. Someone can boost their survival hopes though. Who will it be? Find out with our Rochdale vs Swindon match preview with free tips, predictions and odds mentioned along the way.

Rochdale vs Swindon: Our top predictions

Swindon to give themselves a lifeline

If Rochdale lose this match then they might as well pack their bags for League Two. You could angle a similar claim at Swindon but it wouldn't be the final nail in their coffin – just the penultimate one. Fortunately for the visitors, we are making the prediction that they'll just about get the job done. Swindon have lost their last three but prior to that they had back to back wins over Fleetwood and Bristol Rovers. Both of those wins were away meaning they've won two of their last three on the road and the face off with Rovers was a similar deal to this game; that's a clash of relegation threatened sides. Rochdale haven't won a home game since the 3rd October.

A quiet day for the keepers

The first of our tips gives a nod to these sides propping up the League One standings. It's hard to imagine too much quality being on display; goal scoring has been a problem for both sides all season after all. A glance over the form of both teams screams a lack of goals when they come up against one another. Rochdale's last five at home has seen four matches fall under 2.5 with Swindon's away form seeing just two games reach three goals. Both sides have seen a total of 10 games across those respective last five; that's an average of just two goals per match.

The final prediction for this match is backing Swindon to record a clean sheet. It might seem crazy given they have the worst goals against column in the league but their last five matches on the road have seen them tighten up a little. Yes, they've shipped five goals but the two wins we mentioned in the first of our tips saw clean sheets. Then there is Rochdale; they have managed just three shots on target in their last two matches.

There might be a few game weeks left to run in League One but there will be very few matches that measure up to this one for significance. A draw will not do either side any good, which means there will be two sides going at it. The down side for neutrals is that Rochdale nor Swindon are likely to serve up anything but hard running and sweat. Still, it should be a decent enough watch.

Rochdale vs Swindon: The final brief 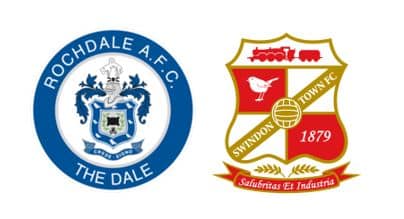