Rochdale and Plymouth go head-to-head in the second round of the FA Cup on Sunday. Can Plymouth make their higher-league class count at the Crown Oil Arena? Read our expert predictions and find the latest odds for the game below in our match preview.

This FA Cup second round clash pits Rochdale against Plymouth on Sunday. Find our top three predictions for the contest below.

It’s been a bumpy few weeks for Plymouth in the League One title race, though Argyle’s overall record this season has been excellent. On Saturday, Ryan Lowe takes his charges to the Crown Oil Arena, where Plymouth are favourites to get the better of a Rochdale outfit that has won only three times in their last 17 assignments and we’re tipping the visitor’s superior class to shine through.

Rochdale have kept just two clean sheets in their last 17 fixtures and their vulnerability at the back could be taken advantage of in the markets this weekend. Plymouth are a dangerous outfit on the road and they have hit at least two goals in four of their last seven away tussles. The threat they carry should be apparent again in Rochdale on Saturday and we recommend a stake on Argyle in the over 1.5 team goals market.

The Dale might not be reliable in terms of producing victories, though they do possess a handy knack for impacting the scoresheet no matter the result. Indeed, Rochdale found the net in five of their last six home matches – in fact, both teams got in on the act in all five of those contests – and the same market holds plenty of appeal for Dale’s FA Cup second round clash with Plymouth this weekend.

Rochdale vs Plymouth preview: Plymouth hoping to bounce back

With seven stalemates in their last 11 matches, Rochdale have become of the Football League’s draw specialists in recent weeks, though their inability to turn ties into triumphs should count against them on Saturday. Robbie Stockdale’s side are 13th in League Two and they are expected to stay in the division’s midsection for the remainder of the campaign. The Dale beat Notts County in the previous round of the cup, though their adventure could end against Plymouth.

Plymouth look like being involved in what already promises to be an open title race in League One this term, though a string of three defeats on the bounce has slowed their charge for silverware.  A date with League Two’s Rochdale in the FA Cup looks like an opportunity for The Pilgrims to get back on track however, and anything other than a victory would be seen as something of an upset. 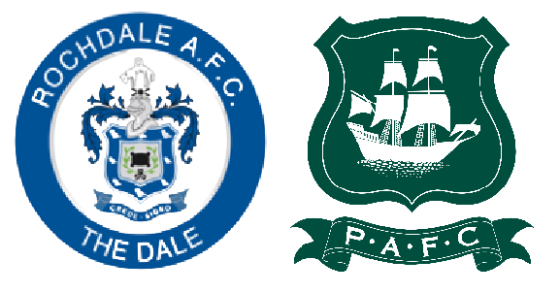 Plymouth have been priced as favourites to beat Rochdale this weekend.

Rochdale vs Plymouth is being shown on ITV in the UK.