Ipswich are yet to click into gear under new manager Paul Cook but they got the job done against second bottom Bristol Rovers on Good Friday and a trip to bottom placed Rochdale is the perfect fixture to record back to back wins. Ipswich are yet to win an away match under Cook but Rochdale have failed to win at home in 18 attempts with 11 losses recorded in that period. Throw in the fact Cook has just switched up his formation and Ipswich should have enough to bank another valuable three points.

Over the course of the entire season Rochdale's games have seen an average of 3.1 goals; that's the highest in the league. Ipswich's average is somewhat lower at 2.1 but does increase to 2.4 on the road. Town have also seen five of their last 10 away matches end over the 2.5 goal cut off, which provides further evidence as to why this prediction isn't too wild. Then there is the less statistical information; Ipswich's switch in formation last time out was to enhance their attacking play. They should create more but they'll be more susceptible to conceding too; their hosts aren't shy of grabbing a goal or two. In fact, they've actually scored more this season than the Tractor Boys.

We've made it clear in our first prediction that we believe Ipswich will win. Despite the fact Rochdale are bottom, we don't think the Blues will make easy work of the game. Ipswich haven't won an away match by more than a single goal since way back in October. Performances aren't what matter at this stage of the season for Ipswich and they'll be delighted to take a scruffy win.

All the stats and odds for Rochdale vs Ipswich

Both these sides find themselves in a situation where time is running out for them to achieve their objectives. Rochdale are aiming to avoid relegation whilst Ipswich are gunning for the playoffs. Both of those targets are mathematically achievable but the realistic view suggests neither will actually deliver. Of course, one decent result could prove the catalyst of a mini run and that could transform everything. If pressed on it, you'd rather be an Ipswich fan.

FAQ about Rochdale vs Ipswich 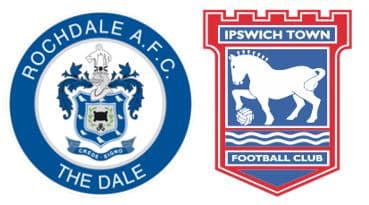