The EFL Cup brings Rochdale and Burton Albion together at the Spotland Stadium. Both sides have been woeful of late and will face one more setback in this knockout affair.

Deciding on a victor for this meeting is not easy given their recent form and the fact that they have struggled to triumph in league outings. In H2H encounters, Burton Albion has won three of their last five duels with Rochdale, with the other two coming against them. However, Burton Albion has lost 12 of their last 20 appearances.  Rochdale’s form is similar with four successive defeats but owing to their home advantage we are backing them to progress at Burton’s expense.

Three of the last four meetings between the two sides have seen a clean sheet at the end of regulation time. Their last two exchanges saw both sides come out triumphant without conceding a goal. With Burton failing to score in eight of their last 10 away matches, we are backing Rochdale to come out victorious. Moreover, the fact that Burton has conceded 2 or more goals in 14 of their last 20 matches suggests that it is a like outcome in this meeting.

Rochdale vs Burton Albion: Check out the best odds and the latest stats

Rochdale vs Burton Albion: Check out the team lineups

It is tough being a Rochdale fan and the fate of the faithful will be tested as they take on the challenge of Burton Albion. They enter this fixture on the back of successive defeats, Gillingham being the latest side to cause them trouble. They will be looking to avenge their defeat in the EFL Cup for some momentum, using the Spotland Stadium, the venue of four wins in their last ten attempts to spur them forward.

It becomes increasingly difficult to keep up with Burton Albion's side as they continue to go downhill with every passing match. They have conceded at least two goals in 14 of their last 20 matches, tasking defeat on 12 occasions. Moreover, their away form is woeful with just one win and six defeats from their last 10 away outings.

Questions About Rochdale vs Burton Albion 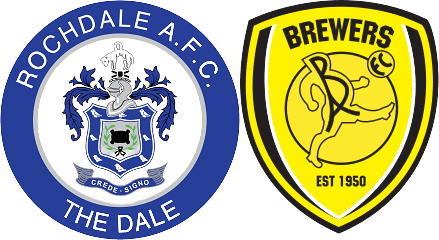