With the season winding down in League One, a duel between Rochdale and Blackpool can have some serious consequences to the final standings. So, we have done a preview of this match and provided some free betting predictions.

The mid-week games of League One bring us a few interesting duels, like Rochdale vs Blackpool. This game is important for both teams, so we have prepared a few betting tips and predictions to help you out.

Odds are subject to change, so check them before you make a bet. Our recommended bookmaker for this matchup is Ladbrokes.

The former Premier League club is in much better form than Rochdale, in addition to being a better team this season. Furthermore, they have won their previous meeting in League One 1-0, although the recent h2h history is pretty much balanced, with two Blackpool wins, one Rochdale win, and two draws in their last five duels. Still, Blackpool is 6th in the league in points from away games, while Rochdale is dead last at home, with only 3 wins in 21 games.

Blackpool to Win at Half Time and Full Time

Top odds and helpful stats for Rochdale vs Blackpool

If you want to bet on the best odds for Rochdale vs Blackpool, check our selection of odds from top bookies:

Rochdale vs Blackpool preview: Both teams need a win to keep hope alive

The hope of survival is still alive for Rochdale, especially after a couple of wins in the previous two rounds. However, it will take a few more good results to get out of the relegation zone, with a bit of help from other teams. In the last five games, Rochdale has two wins, two losses, and a draw. Done, Humphreys, and Ryan are questionable for the duel against Blackpool due to injuries.

With the end of the season getting closer, it's clear that Blackpool is unlikely to earn direct promotion to Championship. However, they seem pretty certain for playoffs, although there are a few teams lurking behind them, waiting for a couple of slip-ups. Fortunately for them, Blackpool is in great form with 16 games without a loss. Madine, Lubala, Virtue, Hamilton, Steward, and Anderson are under question for the upcoming match due to injuries.

Common questions for Rochdale vs Blackpool 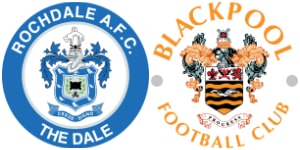