If Rochdale were a boxer, they'd have been down with the ref's count at seven, maybe eight. Their win over Swindon has given them a ‘punchers chance' of rescuing their season; can they build some momentum? Find out with our Rochdale vs Accrington match preview with free tips, predictions and odds mentioned along the way.

Rochdale vs Accrington: A tantalising trio of tips

Rochdale to get rolling

Rochdale might sit bottom of the table without back to back home wins all season but we're still backing them to finally achieve that feat on Saturday. They had a morale boosting win over Swindon on Tuesday whilst Accrington's season plods along until the end with no prospects of anything. Their draw with Blackpool is a decent result in itself but Saturday will be a very different game. They've been hit 7-0 and 5-1 within their last few matches so they'll be fragile as they have to try and open up the ‘lesser' side. Admittedly, this doesn't make a home win a banker but the Dale have won eight of their last 10 competitive head to heads, which swings things in their favour.

There should be a fair few goals

As touched on in prediction one, Rochdale are bottom of the division. It doesn't mean they haven't provided entertainment this season though because they have. Of course, Accrington have chipped in on the entertainment factors recently too even if it's through horrendous defending. We fully expect this game to tick a few boxes on the entertainment scale as well. Throughout the season games at the Crown Oil Arena have averaged 3.1 goals. Then there is Accrington; on the road, their matches average an even more attractive 3.2 goals. Their last three meetings have seen three goals too.

Okay, so the second of our tips predicted a game full of goals. We're not sure it will be Accrington contributing too many though. Why? Well, their games might have plenty of goals in them but they're rarely the team to score them. Across their last five matches they've managed to score just three goals whilst their season average is 1.3 per game; that is hardly an eye raising statistic. Rochdale will need to play their part too. Their defence has been shocking this season but the last few games has seen an improvement; we're saying it will.

Rochdale vs Accrington: Head to Head, Odds and other important stats

Accrington would be having a dull end to the campaign if they weren't performing so badly every other match. It's hardly the excitement their fans crave though. Rochdale would happily take a few thrashings whilst sitting in mid-table though. It's not going to happen this year but if they stay up then next season might be their chance for a more relaxed end to the campaign.

Rochdale vs Accrington: A few Qs 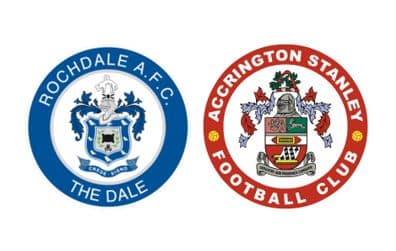