Sunderland supporters have had little to shout about this season – or in any of the last five, for that matter – but young midfielder Ethan Robson has been one of the few bright spots of another dire campaign.

In keeping with the Black Cats' distinct lack of fortune in recent times, though, Robson could soon be snatched away from Sunderland. The 21-year-old, who made his first senior start in the FA Cup defeat to Middlesbrough last month, is now a Rangers and Celtic transfer target.

According to The Sun, the Glasgow rivals will go head-to-head once more to secure the services of the Sunderland native when his contract at the Stadium of Light expires in the summer.

Having impressed sufficiently against Boro in the FA Cup, Robson has been heavily involved in the Championship in the last month and was, arguably, Sunderland's best player last month.

So how good is he and what will he offer the Glasgow giants? Football Whispers run the rule over the Mackem midfielder.

Who is Ethan Robson?

Born in Houghton-le-Spring, south of Sunderland city centre and the Wear, Robson always wanted to represent the Black Cats.

As a youngster he played his club football for Fulwell, north of the river. Then, aged eight, he started on the path to the Black Cats' first team when he joined the club's academy.

For all Sunderland's struggles at first-team level in recent years, the Wearside outfit have produced a steady number of academy graduates – most notably current England goalkeeper Jordan Pickford and Liverpool captain Jordan Henderson.

Given the similarity of their positions, it's little surprise that Robson names Henderson as one of the players he looks up to. He's also a fully-signed up member of the Andrés Iniesta and Xavi fan clubs.

“They always seem to have loads of time on the ball, no matter where they are on the pitch and when I watch Iniesta I always think ‘What is he doing off the ball and how is he making space?' and I try to emulate what he does.”

At the start of January he was given the chance to do that on the first-team stage when Sunderland made the short trip down to Teesside to face Middlesbrough. Boro progressed with a 2-0 win, but Robson's performance offered a crumb of hope for the Black Cats.

“As a young player you've just got to go out there and show what you've got,” Robson said afterwards.

“I'm grateful to get that opportunity to play and all I've wanted to do since I was eight years old is play for this first team so it's a great moment for me and my family.”

That was followed with a full league debut – having already made two substitute outings at the end of 2017 – in a vital 1-0 win against Hull City at the Stadium of Light. Manager Chris Coleman was impressed by his young charge.

Speaking to The Chronicle, he said: “Ethan was putting his foot in, he had presence, awareness, how he receives the ball on the half-turn – he was excellent.

“Catts (Lee Cattermole) was in his ear all the time bossing him and I thought the pair of them were really, really good today. Catts has been there before and seen it and done it, but I’m really pleased for young Robbo.

“I played him in the cup game at Middlesbrough as well and he did OK in that game against a strong team.

“Today it was his home debut and he was really, really good.”

What are Ethan Robson's main strengths?

Like the players he idolises, Robson is extremely comfortable on the ball. Deployed as a deep-lying playmaker he is happy dropping in, picking up possession and trying to get his side moving with a good range of passing.

In the images below, taken from Sunderland's 3-1 loss to Birmingham City at the end of January, he demonstrates that. Receiving the ball inside from Jake Clarke-Salter, he sweeps the ball up the line first time for Joel Asoro to chase.

The technical execution to plant the ball ahead of Asoro first time is one thing. But having the vision and awareness – as well as the reading of the game – to work out what he is going to do in advance of receiving possession is the most impressive aspect.

Set pieces are another particular strength. Blessed with a sweet left foot, Robson has an impressive highlights reel when it comes to free-kicks. One of his best came against Leicester City for Sunderland's Under-23s last season, earning a nomination for the Under-23 Goal of the Season award.

Asked what kind of midfielder he is, Robson describes his role as two-sided: “I like to do both; get forward but do the other side of the game and tackle. So, basically, I can play both positions: attack and defence.”

That is backed up by the fact he has averaged 3.2 successful tackles per 90 minutes in the Championship this season, as well as making 1.4 interceptions per 90.

Those numbers are enhanced by his total of just 253 minutes, but point to a player who excels with or without the ball.

What are Ethan Robson's main weaknesses?

Given he only made his first senior start this year, it should come as little surprise Robson has a few areas to work on and he needs to fill out a little. At times his frame means he can be outmuscled or brushed off the ball but, by the same token, he is not a bustling, ball-winning midfielder either.

He is not the quickest either, though his vision and reading of the game mean his lack of speed is not a big problem as he has the mental sharpness to stay ahead of play.

Technically he is not the best in the air while he could weigh in with more goals. He needs to get into the box more often in order to contribute in that respect. 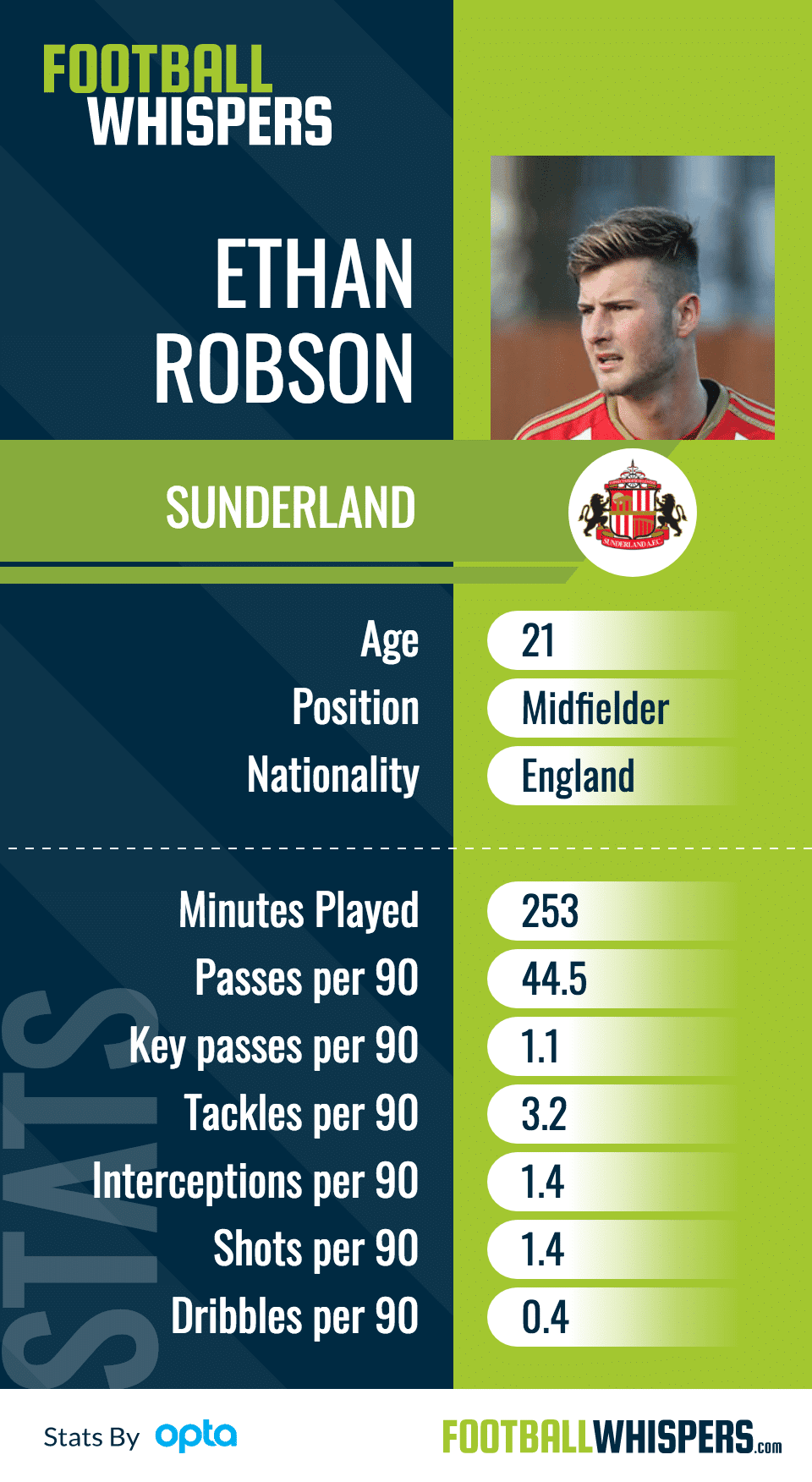 How much would Ethan Robson cost?

Although Robson will be a free agent this summer whoever signs him will have to pay £150,000 in training compensation – due to the Elite Player Performance Plan – as he is under the age of 24.

However, that represents a bargain – and an accessible fee for both clubs – given the impression he has made on Coleman's side in recent weeks, leading to Celtic and Rangers transfer rumours.

The fear for both will be he continues to shine despite Sunderland's travails and becomes subject of interest from elsewhere. But regardless of whether the Black Cats beat the drop, he will surely be moving onto pastures new.

Who would he fit better?

At 21 and with just a handful of games under his belt, Robson's immediate priority should be getting more minutes in order to improve. In that sense, joining Rangers might offer him a better shot at first-team football.

The Gers have, after all, taken players from England's lower leagues in recent times – the likes of Wes Foderingham, James Tavernier and Josh Windass – and bedded them into the starting XI.

However, in terms of a tactical fit, he may be benefit more from working under Brendan Rodgers at Celtic. The former Liverpool boss is famed for his ability to get more from players and he likes technically adept midfielders who can carry out his tactical vision.

Where Robson ends up is far from certain. But what is certain is that neither Celtic or Rangers will want to lose out to the other – just for a change.