The turnaround in form and fortune which has seen Alberto Moreno go from public enemy number one in Liverpool to starting left-back for the Merseyside club is nothing short of remarkable.

The much-maligned Spaniard spent the entirety of the 2016/17 season watching on from the bench as centre-midfielder James Milner made the full-back position his own.

The encouraging start under manager Jürgen Klopp was soon forgotten after his performance against Sevilla in the Europa League final. Sky Sports pundit Gary Neville then turned the screw on Moreno during Liverpool's opening game of the campaign, away at the Emirates.

The former Manchester United right-back claimed it was like starting with a man less with the 25-year-old on the field after the Arsenal opener happened with Moreno in an advanced position.

The Reds were linked with a whole host of left-backs during the summer of 2017. Ryan Sessegnon, Theo Hernández, Ben Chilwell, Benjamin Mendy and Sead Kolašinac were all rumoured to be transfer targets for the club. They finally settled on Hull City's Andrew Robertson.

It appeared as though Moreno's time on Merseyside was up. Robertson was set to rival Milner for a starting role at left-back and no club needs three senior players in that role.

However, Liverpool weren't able to bring in midfield reinforcements and Milner was drafted in to play in his natural role. Klopp was reluctant to throw Robertson in straight away meaning Moreno was given the opportunity in pre-season.

Putting himself in the shop window was how some reports described it. The former Sevilla man didn't get the memo, though, and grasped this chance with both hands. He put in an eye-catching performance against Bayern Munich and slowly it became clear he was a serious contender to start the season as first-choice left-back.

It was more to do with necessity at the time but he's rarely put a foot wrong and now there's an argument to be made that his form warrants his role in the first team.

His understanding with Philippe Coutinho definitely works in his favour and the dynamic between pair on the left gives good balance.

Moreno's selfless running down the flank is one of the reasons the Brazilian maestro often finds himself on the edge of the area with space to work in.

Moreno grabbed an assist against Sevilla in the opening group stage game of the Champions League to exorcise some demons, and followed it up with an impressive and composed performance in the 1-1 draw with Spartak Moscow.

Though rarely challenged defensively, he did well going forward and his pass selection showed intelligence.

He finished the game in Russia having won three tackles, two aerial duels and playing one key pass as well as having a 93 per cent pass success rate.

He's grabbed three assists in the Champions League this season and is arguably the most consistent performer in the defensive set-up.

Robertson, just like Moreno, is taking his chances whenever he's given minutes. It's almost as if the competition between the pair is bringing the best out of them.

The Scottish international could've finished with two assists on his Premier League debut for the Reds had Sadio Mané and Joël Matip had their shooting boots on against Crystal Palace. It was a similar story against Burnley and Leicester City with Robertson running riot down the left hand side, creating all kinds of havoc.

The former Hull City man still has a lot to learn. Klopp is a patient man and will bide his time with Robertson until he feels as though he's ready to be a regular starter.

There have been some hints at this recently. Suggestions he's not as synchronised with the defence as he should be, just yet.

He was impressive going forward against both Leicester and Burnley but there were question marks over him positionally when looking at him from a defensive point of view.

For the Scott Arfield and Shinji Okazaki goals the space between him and the left sided centre-back is noticeable and on both instances he's mere inches away from blocking the eventual goals.

Moreno isn't the best when defending but he does get into good positions to cover and sweep for his centre-back. It's that understanding that develops with time.

Another aspect of Robertson's game that will improve over time is his pass selection. Yes, he's arguably the best crosser of the ball in the Liverpool team and, yes, he's creating chances on a regular basis – 1.5 per 90 minutes to be exact.

But, and this may sound ridiculous, are they the chances Liverpool want to be creating? 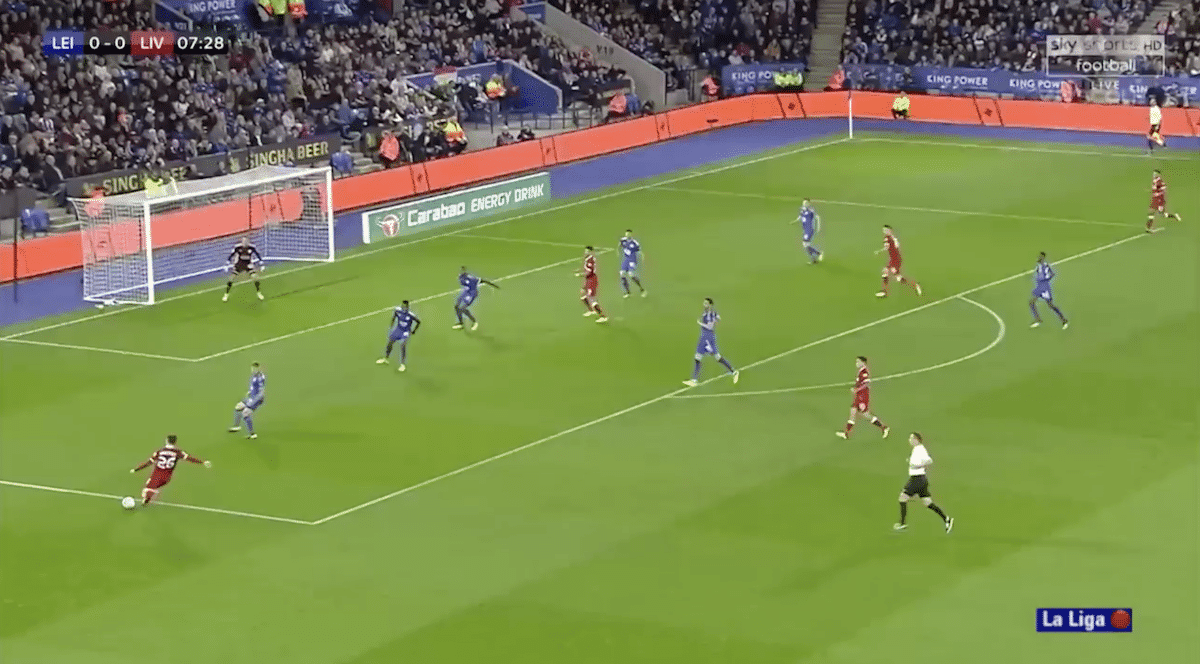 He's undoubtedly a threat when in the final third on his left foot. He takes a touch before putting a variety of different crosses into the penalty area. But he'd perhaps be more of a weapon if he was unpredictable.

In the picture above, taken during the disappointing Carabao Cup loss to Leicester, Robertson is lining up a cross. He whips it across the face of goal but nobody is in a position to make the most of it.

In this scenario, more often than not, Moreno plays the ball back to Coutinho. The Brazilian is in space with just one Leicester man in proximity. He could feint to shoot, as he so often does, drawing more men close to him before playing it to the Liverpool man on the right on the edge of the area.

When the ball arrives into the box there may be more space, with players rushing out to front up Coutinho, and more men in central positions, with Coutinho joining Marko Grujic and Dominic Solanke.

All theoretical, of course, but it's typically what Liverpool do. 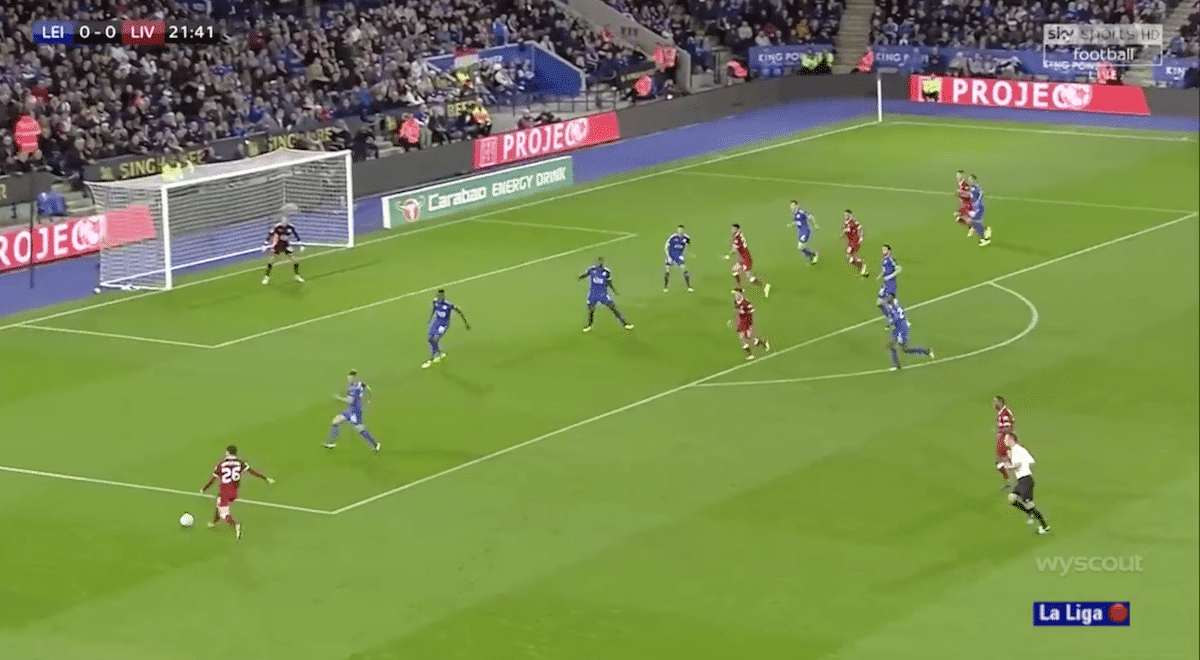 It's a similar story in the above picture. This time Robertson puts in a cross and Solanke, stretching, fires wide. It's an exceptional cross, and it had to be to reach the Liverpool man, but was it the best option with Wijnaldum free just ahead of the referee?

Furthermore, if Robertson is going to continue to do what he does best then the Liverpool players are going to have to adapt. When Solanke connects with the above cross, no other player in Red is looking to attack the ball. No matter how good the crosses are it's irrelevant if players aren't looking to get on the end of them.

Perhaps this is in the back of Klopp's mind as he manages what games he uses Robertson in and who he selects in attack as he looks to strike a balance. When the left-back is properly bedded in and everyone is on the same page, the former Borussia Dortmund manager is going to have quite the selection headache with both Moreno and Robertson putting forward solid cases to start.