During Celtic’s 2-0 win over Rangers in the Glasgow derby, Patrick Roberts put in a man-of-the-match performance to make the £12million Manchester City parted with back in 2015 to secure his services ahead of a number of other Premier League clubs look like a relative bargain.

He had a purpose to his play and tormented Rangers for the 69 minutes he was on the pitch. He looked at home on the right of the Celtic attack and had a hand in both of the goals. He was credited with two assists despite the first being rather fortunate.

Rangers only half cleared a corner and the 20-year-old fired a shot back in from the edge of the area. It was a scuffed shot which was wasn’t troubling Wes Foderingham in the home side’s goal. However, a ricochet resulted in the ball falling kindly for Tom Rogic who smashed the ball home.

The second, however, was all about Roberts’ ability as a creator. Rangers pressed high and weren’t able to win the ball back and Celtic broke. The winger drifted inside and played a perfectly weighted pass through to Leigh Griffiths. The striker was able to latch onto the ball without breaking stride and fired it past the advancing Foderingham.

Cue pandemonium in the stands.

Griffiths picked up a Celtic scarf on the pitch and started twirling it round his head as the away side relaxed knowing all three points were heading back to Parkhead. Just seven games into the Scottish Premier League season and eight points separate the two clubs.

Roberts was instrumental in this. He’s back at Celtic for another season and this could be the year he finally fulfils the abundance of potential he has after a transitional couple of years in Scotland.

While he's always had the ability, what has sometimes been lacking from his game in the past has been intelligence. He'd run down blind alleys, he'd hold the ball for too long and he make the wrong decision.

However, it's something that improves with experience and against Rangers there was very little evidence of poor decision making and instead he appeared to be doing everything right.

There was a maturity to his game and he was picking battles knowing he'd come out on top. 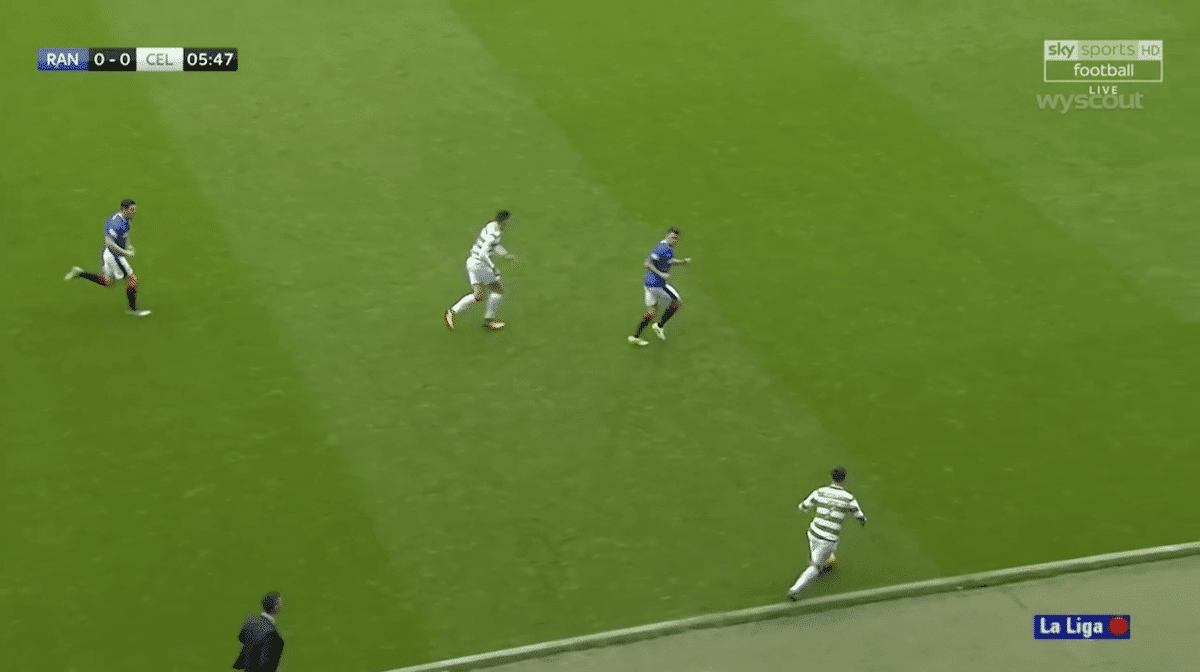 Just six minutes into the match on Saturday and Roberts gives Rangers a taste of what's to come. Lee Hodson, filling in at left-back for the home side with both Lee Wallace and Declan John ruled out, had a torrid time against the on-loan attacker.

In the picture above you see Roberts pick the ball up close to the touchline. He's stronger on his left foot so the temptation is always to cut inside. To nullify him you have to block this option off and force him down the right.

However, Hodson isn't even in the picture above and Ryan Jack, the Rangers man closest to Roberts, can't get too close because he's keeping an eye on Rogic.

The Rangers left-back is slow to push out and square Roberts up. When he eventually does he's worried about getting beaten for pace and stands off him. This allows the Celtic No.7 to do what he does best. 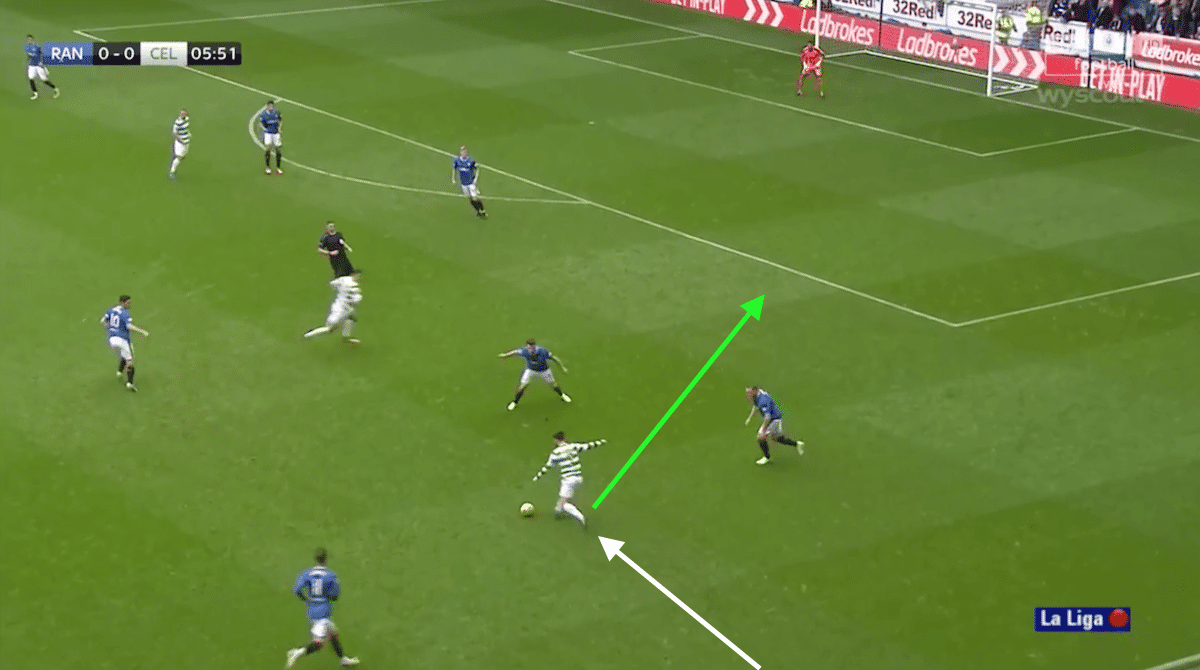 Hodson is in limbo at this point. He's not tight through fear of getting done for pace and he's not in a position to cut out a pass.  He leaves a massive space in the home side's defence, one that Rogic spots and attacks. Roberts, who isn't really being pressed, is able to just thread the ball between Hodson and Jack.

Rogic gets onto the end of it and wins a corner. 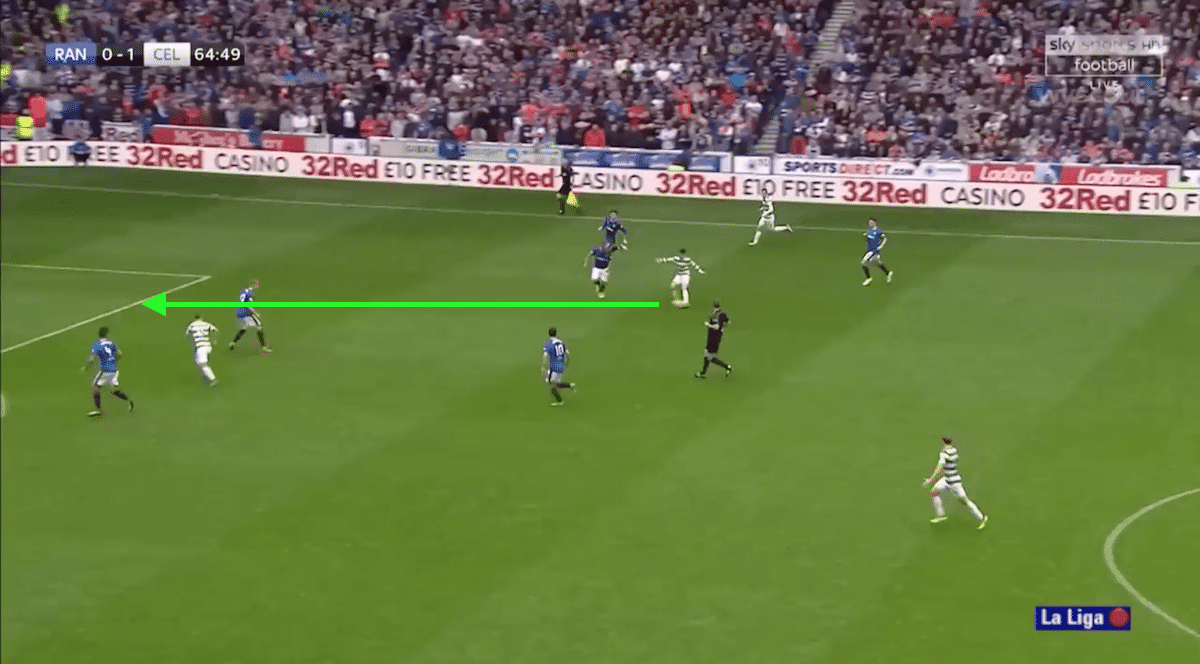 The move after six minutes was a rehearsal for the build-up to the second goal. Roberts again picks the ball up on the touchline after Celtic are able to play through a high Rangers press.

It's something we highlighted last week as a potential weakness for the home side, their inability to execute an organised high press.

Roberts picks the ball up and drives inside. Hodson isn't close enough to the Celtic man and he's able to play an incisive ball through the area which the Rangers left-back would normally be defending.

It's perfectly weighted for Griffiths who is able to fire home with just one touch.

He's by no means a one-trick pony, though. As previously mentioned, he showed his intelligence at various stages. 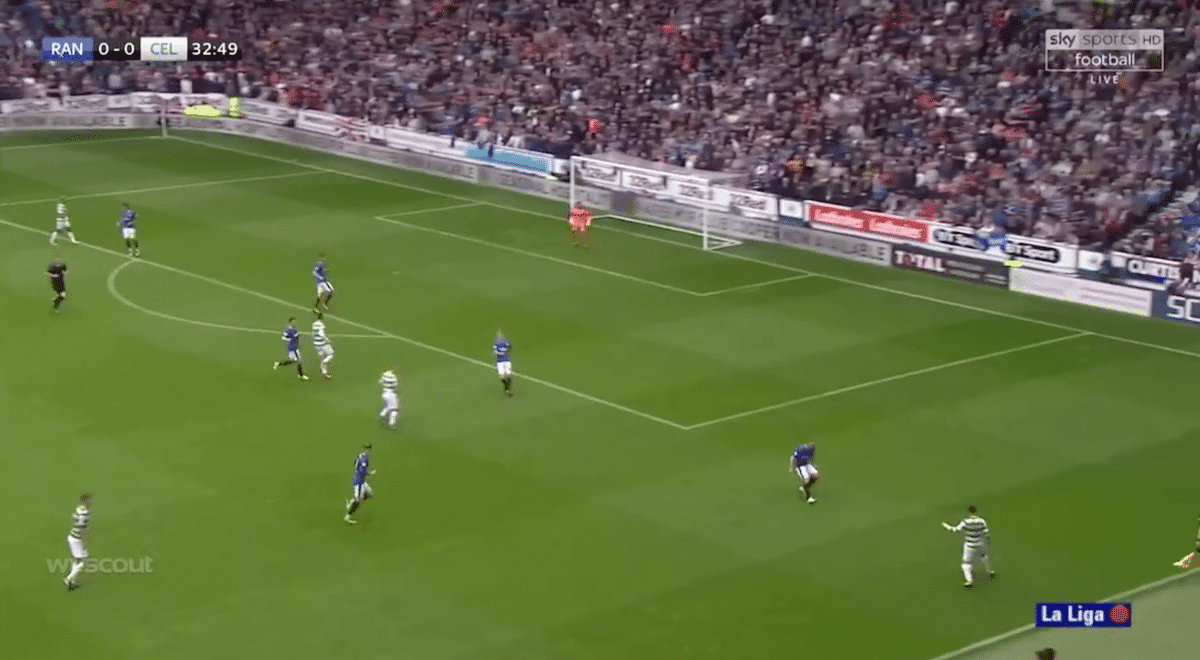 In the above picture we see Roberts receive the ball in a wide area. Rangers are getting men back to cover for if he cuts back inside. The Celtic man, however, spots the space between Hodson and the left-sided centre-back, as well as the space in behind.

He feints to go inside before chopping back onto his right and driving past Hodson on the outside. 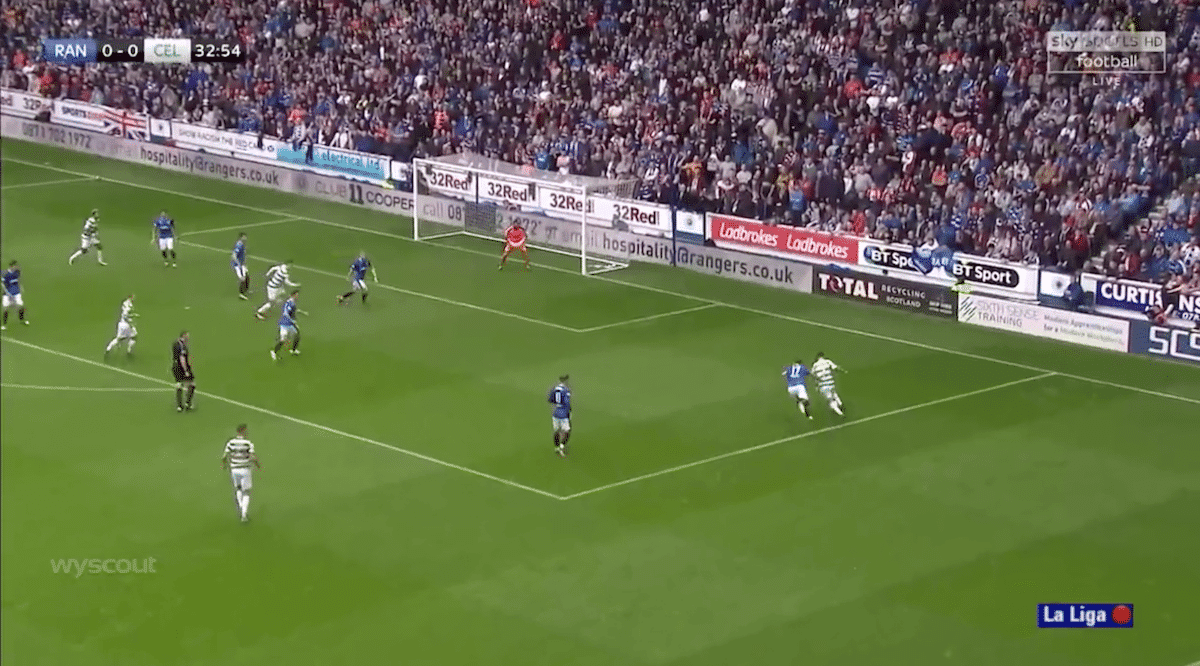 He gets into the penalty area and attacks the near post. His low cross is eventually blocked and goes out for a corner. But you can see from above it was the right decision to this time take Hodson on the outside. It's fairly obvious but is hows he's switched on and can mix it up when possible.

On another day he finishes with four assists. It may be the match which sees him turn into a more consistent player and he could be rivalling Scott Sinclair for the award of best wide forward in Scotland.

If he's able to perform at such a high level throughout the season then Celtic will have a Player of the Year contender and may have trouble bringing him back to Parkhead next summer.