Such was the fascination when three Spaniards ran out at Wigan’s old Springfield Park just over 20 years ago it was almost as though martians had come down from Mars. This may have been the era of the foreign import and the Premier League was about to see one of the biggest influxes of overseas players in the history of England’s top division; but in the lower reaches of the country’s third tier such signings were still pretty rare.

In July 1995, Dave Whelan, the multi-millionaire owner of Wigan Athletic somehow managed to talk three Spanish players to sign for his unfashionable Third Division side in a deal that stunned English football. Roberto Martinez, Jesus Seba and Isidro Diaz would instantly be christened, “The Three Amigos,” even becoming the first Spaniards to play in the FA Cup when they faced non-league Runcorn.  Almost two decades later, Martinez would not only lead Wigan into their first FA Cup Final at Wembley, but win it too.

Martínez had no idea what to expect when he left his native Spain as a 22-year-old to sign for Wigan, other than that it would be some sort of culture shock. Looking back, he says it was, “like coming to the moon”, but it was an indication of Whelan’s ambition when it came to Wigan that he had spread his net so far, mainly due to the fact that the man in charge of his sports stores in Spain had spotted three players in the Real Zaragoza reserve team that he thought were worth a look.

So maybe more as a speculative punt than a statement of intent Whelan brought them over to England and impressed them with his long-term plan to take Wigan from the lower reaches of English football with its crumbling home ground into the Premier League and a brand-new stadium – they didn’t need asking twice.

The three were soon accommodated in a local hotel for six months before moving into their own house, just a couple of miles from where the JJB Stadium now stands. None of the new signings could speak a word of English so they were sent to Wigan College twice a week to learn, while they got over their collective lack of culinary skills by eating in restaurants throughout Manchester and Liverpool.

Never one to miss the chance of a little publicity, Whelan even gave them a sponsored club car with, you guessed it, “THE THREE AMIGOS,” emblazoned on the side; but the players were still not used to English roads and the erratic nature of their driving ensured that everybody knew just who was in the car anyway without the need for the signage. “We kept going the wrong way around the roundabouts”, Seba recalled in The Daily Mail some years later. “I had a crash in the first week, when the police arrived they didn’t know what to do.” 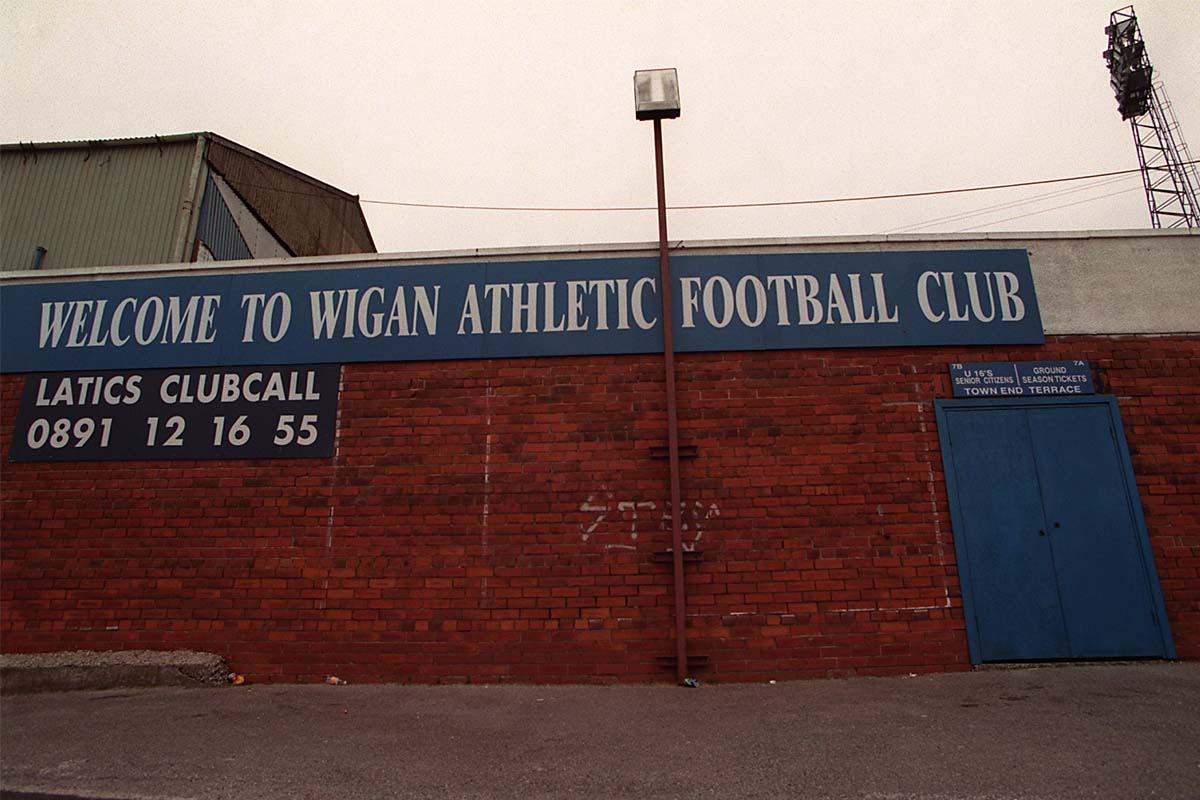 Off-field differences weren’t the only thing that the amigos remember when looking back at their introduction to life in the English Third Division. “I had never heard of Wigan, and when it was explained to me that they played in the fourth division yet were still professional I found it hard to imagine,” Roberto Martinez told The Guardian.

“The football was very different, too. I was a technical player, it was a massive shock. It was more like rugby, that's where all the ideas seemed to come from, all about gaining territory and keeping hold of it. You didn't get much time on the ball, and hardly anyone seemed to want it. I had to adapt very quickly, but it was a challenge I always enjoyed. It was never a problem.”

Seba had played in front of full houses during his time at Zaragoza against the likes of Barcelona and Real Madrid, and had a winner’s medal from the Copa del Rey, which meant that adjusting to the rough-and-tumble of Springfield Park and of the English fourth tier was not easy.

“It was difficult because we played the long ball all the time,” Seba would later tell the Daily Mail. “Our opponents would call us “Spanish bastards” and their fans would shout ‘Go home’ but it’s the same in all countries.

Tricky winger Diaz found playing in the snow something of an experience to say the least. “Being from Valencia, where in winter it’s 12 or 15 degrees, we couldn’t believe the match went ahead. You couldn’t stay on your feet or stop if you were running, and you certainly couldn’t play football.”

However, one thing Seba and Diaz were aware of during their time in the English game was their fellow countryman’s potential to become a top coach and manager. “When we played at Balaguer and even with Wigan, after the game or at half-time Roberto would always talk about tactics. You could see he was interested in being a coach,” says Diaz. But in order to follow his dream of being a manager Martinez would have to leave the club he had represented over 200 times and the town he now called home.

So as Wigan began their journey up the leagues Martinez found himself heading to Motherwell in a move that was doomed from the start. “He was slightly too classy for Scottish football at the time,” former Motherwell team-mate Pat Nevin told the Guardian. “He's a modern player. He likes to pass the ball.”

It wasn’t long before he found a new spiritual home in South Wales when he signed for Swansea City with the intention of extending his playing career while also preparing for a new coaching role; and the move worked perfectly for both parties as he eventually took over as manager and the club saw a change in fortunes almost immediately.

Martinez was now seen as the man behind a successful project, and because of that he was winning a lot of friends and gaining much admiration. His potential wasn’t going unnoticed either with clubs back in his native Spain, as well as in Britain prepared to offer him a contract. So when his old friend and employer Dave Whelan asked him to return “home” and manage Wigan in 2009 following the departure of Steve Bruce it was the perfect fit – he had gone full circle.

Bruce had left Wigan in a position of relative comfort in the Premier League, floating around in mid-table and picking up the occasional scalp along the way. But it was Martinez’s job to take them that one step further and although a number of top names had moved on, he had the complete backing of his chairman, who would give him the support and time that he needed.

Martinez would eventually reward Whelan in the most incredible way when he took Wigan to an FA Cup Final victory over Manchester City in May 2013 and undoubtedly the greatest day in the club’s history. By leading the club to their first cup final appearance and winning their only major trophy to date Martinez had made the impossible possible; but incredible as the Wembley victory had been the team were struggling, and reality soon hit home when Wigan were relegated just a matter of days later.

In truth the FA Cup success had been something of a distraction from the bigger picture, a case of papering over the cracks. Wigan was a club on the slide and it wasn’t long before Martinez, who was now an established Premier League manager, would sever his ties for a second time when he agreed to become Everton’s new manager. 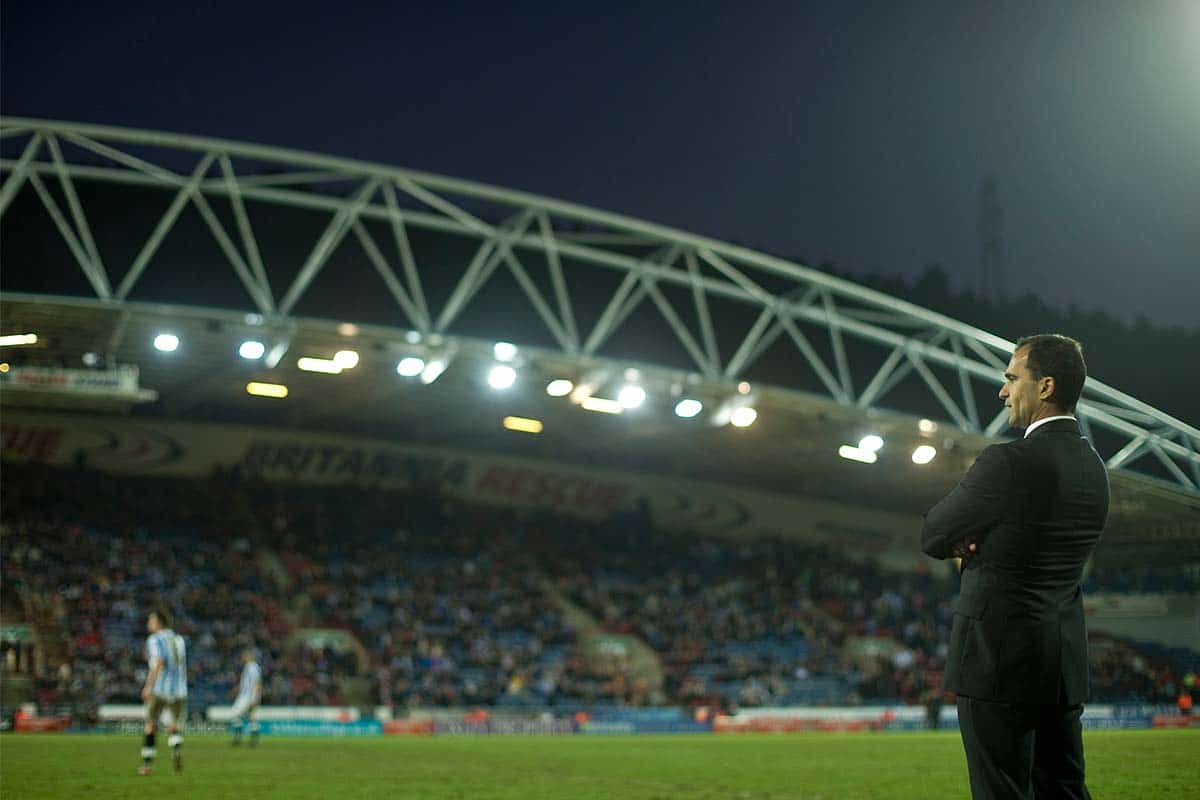 During his time at Goodison Park Martinez probably hasn’t lived up to his own high expectations, but within the game he still remains one of the more respected coaches thanks to his honesty, positive style of football and emphasis on promoting young talent. His future may be uncertain due to a new regime at Goodison Park, but there is little doubt that whatever happens he will always attract interest from clubs throughout Europe.

So what of the other two amigos that had made the journey to England with Martinez back in 1995?

Jesus Seba left the club at the end of 1996 after playing just 27 games and scoring three goals, while Isidro Diaz made 87 appearances in two spells, scoring 18 times and playing a part in the Division 3 title triumph in 1997 under John Deehan.

These days Diaz works for an internet delivery company and lives in Castro, northern Spain, with his wife, Casida, and their two daughters. Diaz was employed by Wigan once again under Martinez as a talent scout and was involved in moves to bring Arouna Kone, Ivan Ramis and Mohamed Diame from Spain to the DW Stadium, as well as plans to develop Wigan’s new residential youth academy.

They may be gone but none are forgotten, and what is certain is the bond that was forged between the “Three Amigos” and this small outfit in the North West that constantly struggles with being in the shadow of some of the biggest clubs in the land continues to this day. Something that Jesus Seba tried to put into words when he was later asked about his time at the club.

“I know it’s not Spain — it’s not my home — but when I came here the people were like our family and it’s still the same.”