Roberto Firmino is having a defining season for Liverpool but, because of the goalscoring exploits of Mohamed Salah, it’s going under the radar.

The 26-year-old was handed the No.9 shirt in the summer after giving his No.11 to Salah and it came as a surprise to many who had hoped Jürgen Klopp would spend big on a proper centre-forward.

With the likes of Alexandre Lacazette, Andrea Belotti and Álvaro Morata all up for grabs it appeared an ideal opportunity for the Reds to sign that clinical striker; the final piece of the puzzle.

However, Klopp was convinced the former Hoffenheim star was his perfect frontman and the number change was yet another sign the manager had no doubts in his mind that the Brazilian attacker was the one to lead his line.

It was a brave call on Klopp's part. Yes, he wants his team to share the goals. The less reliant they are on certain individuals the harder they are to stop. Tellingly, we're only in January four Liverpool players have six goals or more in the league.

Philippe Coutinho may have been one of the quartet but Alex Oxlade-Chamberlain has stepped up over recent weeks and already has three strikes to his name.

It was a brave call because had Salah taken time to adapt to his new surroundings then there would have been more pressure on Firmino to score. The Brazilian forward is a lot of things but prolific he is not.

Firmino is superb at what he does and his work rate is unparalleled, but his goal return of 21 league strikes in two full seasons doesn’t paint him as a reliable goal threat. Furthermore, he's ‘outperformed' his expected goals according to understat.com by close to four goals.

The trend has continued this season in the Premier League. Firmino's xG for the campaign to date is 6.51 but his goal against Manchester City was his tenth of the campaign. He's just one shy of his tally for last season and there's still 15 matches to play.

His xG90 this season of 0.36 is the best it's ever been and up from 0.30 during 2016/17. It shows he's getting into slightly better areas and while 0.06 isn't a huge difference, it is close to three goals over an entire season. And given Firmino usually outperforms his xG that figure could be closer to six or seven.

The Liverpool No.9 could finish with close to 20 strikes in the league. That in itself isn't a bad return at all for a forward many doubted. But Firmino isn't just in the team to out the ball in the back of the net, he's much more of an all-rounder and a lot of what he does can't be quantified.

His assist against City was his fifth in the Premier League and his ninth in all competitions. It's only when you include assists you realise just how effective Firmino is as a forward contributing to the team.

For context, Harry Kane has been involved in 33 goals in all competitions, Romelu Lukaku has had a hand in 22, Morata 16 and Sergio Agüero has 25 goal involvements to his name. Firmino has 26 and he spent time playing as a wide forward earlier on in the season.

Daniel Levy is believed to want close to £300million for Kane while Chelsea and Manchester United parted with a combined £140million to sign Lukaku and Morata. Agüero, meanwhile, is widely regarded as one of the best forwards in Europe.

Yet Firmino, who cost Liverpool £29million and is a player many believe is nothing more than an attacking midfielder, has been involved in more goals than all but Kane.

He could finish the campaign with 35 goals involvements. Does it really matter how he reaches that total?

Firmino is a complete forward

“He's playing the Karim Benzema role better than Benzema himself.”

A selfless centre-forward who allows the wide players to do what they do best. Call Firmino what you like; raumdeuter or a false nine, the truth is he's a complete forward these days. He holds the ball up, he wins his aerial duels (2.2 per 90 minutes), he runs the channels and he's making runs in behind the opposition. His goal against City was one you'd expect Kane, Lukaku or Agüero to score.

He showed great movement to get onto the pass from Oxlade-Chamberlain, he eased John Stones out of the way before calmly lofting the ball over Ederson.  It was an eerily calm finish in what was a frantic game of football.

That was Firmino the goalscorer. The first goal was Firmino the creator. He fights Fabian Delph for the ball and pokes it to Oxlade-Chamberlain. The former Arsenal man charges past Fernandinho before firing beyond Ederson.

Not many other forwards in the Premier League attempt to win the ball back with such tenacity. 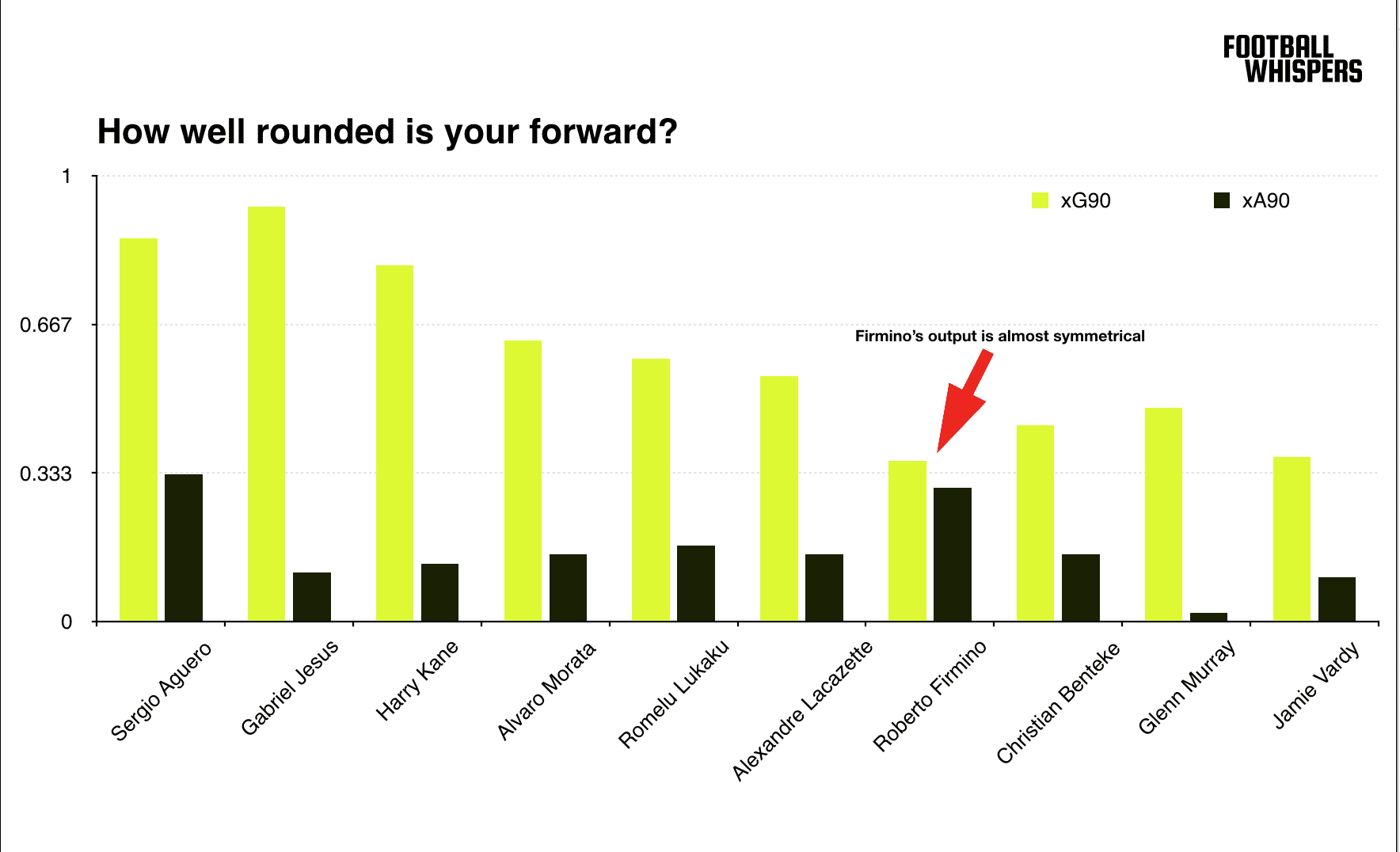 The graph above shows xG90 and (expected assists) xA90 for strikers in the Premier League. After combining xG+xA90 we've ranked them from highest to lowest.

The majority on the list all rely on xG90 to score highly. Only Agüero and Firmino have an xA90 over over 0.30, after that it's Lukaku with 0.17.

Firmino creates and gains chances at a roughly equal rate. His output is almost symmetrical and he's bordering on elite in terms of what he does for the team and overall involvement. His xG+xA90 is 0.63 this season, up from 0.50 last term.

Unlike others he offers more to the team than just goals so there's always going to be a use for him, even if the supply to him is cut off. If he continues to improve then Liverpool may have a struggle to keep him at Anfield.

He's not just the Reds' No.9 in number. Klopp has been justified in putting his faith in the Brazilian. He's the spearhead of their attack and still one of the most underrated forwards in European football.