Every player has a price. Or, at least, that's what is claimed.

The big money being pumped into the world of football by billionaire owners and TV companies eager to get a slice of the action has certainly strengthened that argument.

Clubs now know it, too. Previously, it may have been muttered as a negotiation tactic. Now it's a genuine threat. Paris Saint-Germain's acquisition of Neymar changed the game forever.

Barcelona, burnt by the loss of the Brazilian, had to act to tie Lionel Messi down to a new deal.

The Argentine legend had a release clause of €400million. In previous years those at the Camp Nou would have slept easy knowing there wasn't a chance a club would part with such a fee to pry their prized asset away. But reports suggested Manchester City were putting together a package to convince the five-time Ballon d'Or winner to try his hand in the Premier League.

Just six months after Neymar's shock move to the French capital, Messi put pen to paper on a deal which saw his release clause swell to $700million.

La Liga decrees every player's contract must have a release clause. The Premier League, however, doesn't. So it's down to the respective clubs and Liverpool are against inserting them into deals.

It may be risky as players are able to run down their contracts to force a move but this stance allows them to react to the current transfer market with ease. It's how the Reds have been able to pocket a combined £305million for the sales of Fernando Torres, Raheem Sterling, Luis Suárez and Philippe Coutinho.

Liverpool got above market value for all four and their risk was rewarded. After all, the quartet may have been brilliant players in their own right but the system wasn't built around them.

Suárez succeeded Torres and it's clear the idea was for Sterling and Daniel Sturridge to make up for the loss of the Uruguayan forward. But then the former left.

So Christian Benteke and Roberto Firmino arrived to fill the Sterling void in the team while Jürgen Klopp felt he had enough depth in the squad to cope without Coutinho for six months. A top-four finish and a Champions League final appearance means he was justified in his decision.

Make no bones about it, Liverpool are a selling club. But unlike so many others, they're a smart one. There's always a plan in place for every eventuality.

However, despite this, and the fact there's a magic number every player, there's one player who should be considered priceless and irreplaceable.

Reports in Spain recently claimed that Barcelona are set to return to Merseyside for the third time with Firmino the player in their sights this time around.

The flamboyant Brazilian signed an extension in April. He's now one of the highest earners at the club. By all accounts, he loves life on Merseyside with his family and was said to be pivotal in helping convince Alisson that Liverpool was the best place for him to develop.

The Reds shouldn't entertain any offers for the maverick forward. Take the phone off the hook. Bin the fax machine. Block the Barcelona gang on WhatsApp.

Firmino is off limits.

He's been the one constant in an ever-evolving forward line since the German tactician was appointed as manager in October 2015.

Firmino has managed to master the false-9 role, something few in the world other than Messi have managed, while simultaneously becoming one of the best forwards in Europe. What he does is near impossible to be replicated. Everything about him is unique.

Yes, there are players with his work rate. Others can match his goalscoring output. There are even some who are as creative as the former Hoffenheim man. But there isn't a single player who can do what he does collectively.

And without him, or a player of his profile, it's difficult to see how this Liverpool forward line functions as effectively.

The 27-year-old knits everything together and, as shown in the video above, his selflessness allows Sadio Mané and Mohamed Salah the space to do what they're best at.

The Football Whispers player comparison widget throws up a few intriguing names when looking at those with similar stylistic traits as Firmino.

Steven Bergwijn, a rumoured Liverpool transfer target, makes the cut along with Marco Reus and Nicolas Pépé. Yet whule the trio would no doubt be welcomed at Anfield, they're all likely to flourish alongside Firmino and not in place of him. 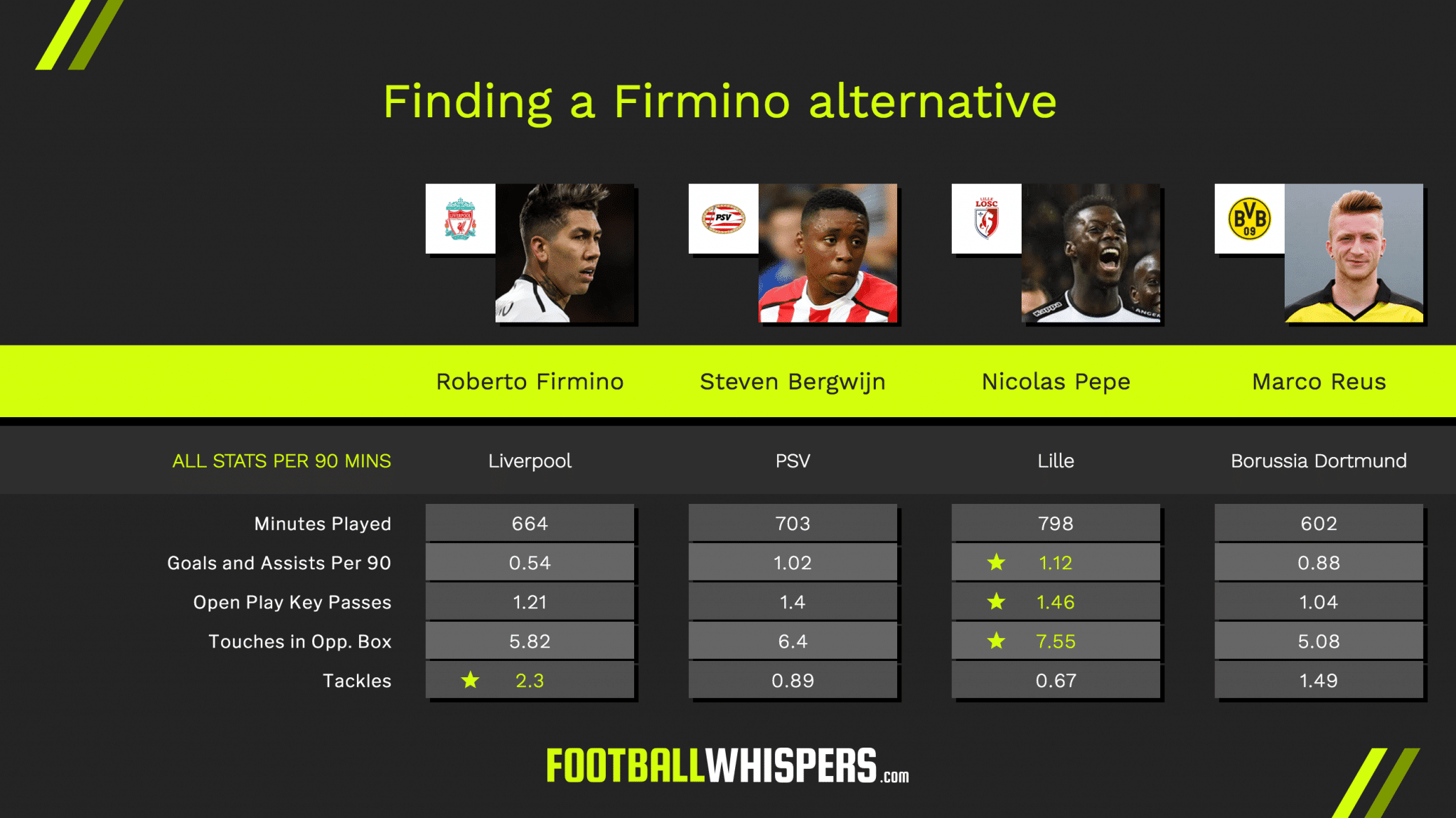 The numbers back it up, too. However, they all play different roles for their respective teams and while the comparison widget matches them in terms of profile, the stats don't paint a true picture.

What is noticeable straightaway in the graphic above is the difference in tackles won per 90.

Bergwijn and Pépé don't have to do as much defensive work in their teams right now and the big question would be whether or not they could ramp it up if they had to.

Firmino is averaging 2.3 this season, the same amount he averaged during the 2017/18 campaign. The same season he managed over 40 goal involvements across all competitions.

It's why he is as near priceless as can be in the modern transfer market. Selling the Brazilian, just as he's coming into his peak years. would mean a drastic change in the way Liverpool play football.

It is simply is a risk the club don't need to take.