Roberto Firmino is an enigma. People still don’t truly understand his role in this Liverpool machine. His lack of goals is still a talking point and, given the opportunity, many would look to upgrade on him.

It’s been the story since he arrived on Merseyside back in 2015. Thrust into the false-nine position by Jürgen Klopp when it became clear Christian Benteke wasn’t the right fit for his vision, Firmino was initially praised for his all-around game. He netted double figures but there always a feeling his wastefulness could cost the Reds in a big game.

The German tactician not only stuck with him, he essentially built the attack around him. The NY Times feature on Liverpool’s use of data revealed Ian Graham, the club’s director of research, believed the Brazilian would be the perfect foil for transfer target Mohamed Salah.

Safe to say, Graham was spot on. The Reds’ No.11 has 86 goals in 134 appearances since the switch to Anfield and Firmino has facilitated a high number of those, though not always directly.

The maverick ex-Hoffenheim attacker also helped ease compatriot Fabinho into the team. With Liverpool using a 4-2-3-1 shape it was the No.9 who played as the attacking midfielder, often dropping into the middle third to support when necessary.

“There’s something that the Kop wants you to know,
“The best in the world is Bobby Firmino.
“Our number nine,
“Give him the ball and he’ll score every time.
“Siii, señor,
“Give the ball to Bobby and he will score.” ? ? pic.twitter.com/aNaIxRW65t

Still, the lack of goals was a concern for some. His 15 during the 2017/18 campaign was a career-high for him in the Premier League but he never challenged for a Golden Boot award with such a return. Without him, it's safe to assume Salah wouldn’t be a two-time winner of that award and Sadio Mané wouldn’t have claimed it last season.

Firmino’s performances have been scrutinised a lot this season. He went two months without a Premier League goal after scoring what tuned out to be the winner against Chelsea in September. The Brazil international had to wait until November to add his total, this time popping up with the winner away at Selhurst Park. It was another month until he found the back of the net again in the league, in the 4-0 dismantling of Leicester City.

But he went into the game at the King Power in fine form having been the difference maker as Liverpool claimed their first-ever Club World Cup. He scored the winner in both the semi-final and the final as the Reds triumphed in Qatar. 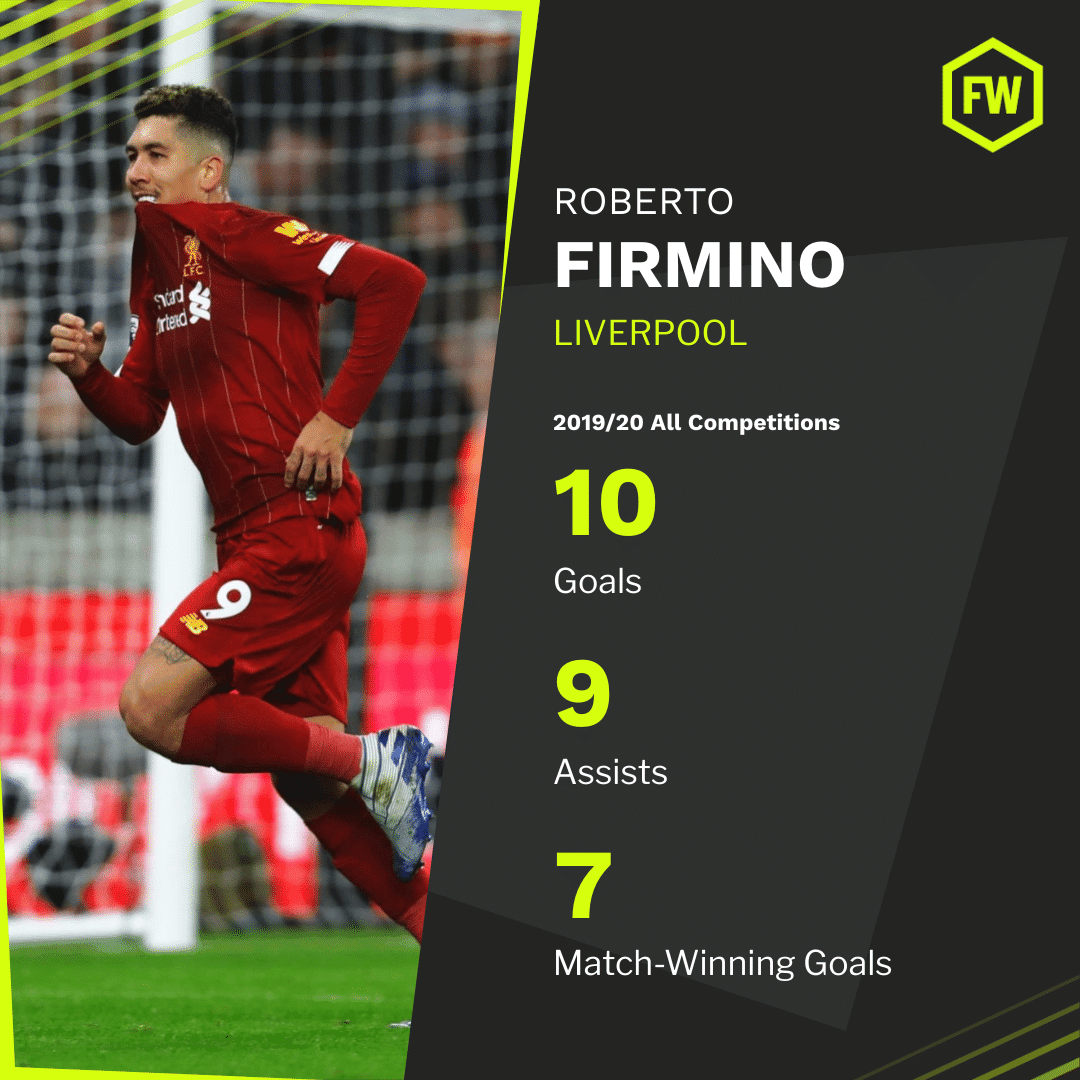 Firmino then decided the game against José Mourinho’s Tottenham Hotspur with what was a sublime left-footed finish. He should have had a goal against Manchester United but those in the VAR booth spared David de Gea’s blushes when they deemed Virgil van Dijk’s attempted header to be a foul on the Spain international.

Undeterred by this injustice, the 44-cap Brazilian went about his business against Wolverhampton Wanderers.

He had four shots on the night. The easiest of the bunch arrived just on the hour mark. Rui Patrício was still stranded on the floor after diving to save a Takumi Minamino effort. The former Red Bull Salzburg man, making his Premier League debut, saw his tame shot blocked before it reached the stopper. However, the ricochet fell kindly to Firmino who essentially had an unguarded goal to fire into. Unfortunately for the Reds, his first-time effort went straight at Patrício who gathered easily.

He had to wait 20 minutes for his next opportunity. When it arrived, Firmino burst past the Wolves defence and raced into the penalty area. Patrício went to ground early and all the Reds No.9 had to do was lift the ball a little. It was by no means an easy chance but it was one he couldn't afford to miss in a tight encounter.

Yet just two minutes later he was wheeling away having scored perhaps the hardest chance of the lot. Jordan Henderson picked him out with a pass in the area but Firmino was squared up by Conor Coady while João Moutinho was within touching distance from behind. In that situation, most would rush the shot but the Liverpool man didn’t. He took a touch, slowed play down and then fired a rasping left-footed effort beyond the Wolves keeper.

For the second time in three matches, Firmino scored what turned out to be the winner. Remarkably, 70 per cent of his goals this season have been match- deciding goals and 50 per cent of them have arrived after the 80th minute.

He’s not just a clutch player, he’s the clutch player for this rampant Liverpool side. He’s never going to be prolific but he doesn’t have to be. He steps up when the Reds need him.