Roberto Baggio is Italian football’s great oxymoron. Skill, technique, finesse and a great understanding of the game of football in an attacking sense. For all the skill he possessed going forward, he was the opposite of the reputation given to Italian football spanning across his whole career. Italian football was defensive know-how and structured play.

Italian football was known for its defensive understanding, but it also attracted the best in attacking talent, too. The 90’s was a time of huge riches for Serie A. It was the league to be in at the time, with obsessive fans, flamboyant characters and the best football in the world. In a time before the Premier League, Serie A was the attraction to the stars.

The Milan side of the 90s was considered one of the best ever, and with teams like Napoli containing one of the greatest players of all time in Diego Maradona and Lazio attracting Paul Gascoigne, the prince of English football, it seemed like the stage was set for the grandest, and longest of festivals. And one man arrived just in time to start the party in style.

Baggio as a young player has lit up the scene, 110 goals in 120 appearances for his youth team is a graduation with honours, and as a professional player made his debut at 15.

Signing for Fiorentina for £1.5million in 1985 at the age of 18, Baggio was clearly one for the future for Viola. But how far in the future, they wouldn’t have known.

In the first week of his time with the club, Baggio broke down with an ACL injury – one that would hamper him for the rest of his career. At such a young age, Baggio was changed forever. 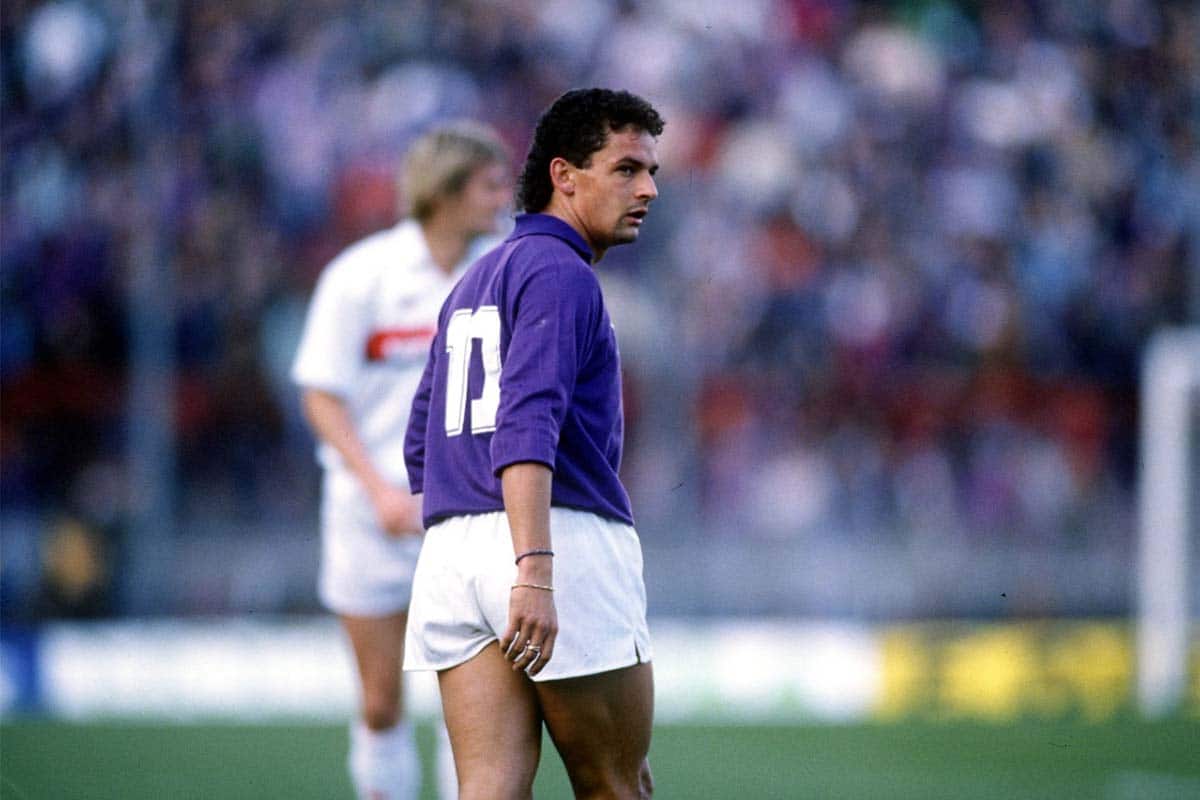 The player came back and, with the support of the fans, scored his first goal 2 years after signing, against Maradona’s Napoli, earning a 1-1 draw and helping stave off relegation in the process. The faith shown in Baggio from the club and fans alike was beginning to pay off, and from that moment, a love affair began.

During the 88/89 season, under former England manager Sven Goran-Erikson, Baggio broke through. Big time. Even though he was only just in to his 20’s, Baggio scored 15 league goals and helped propel the team in purple to a 7th placed – and UEFA Cup qualifying – berth. For the divine pony (Baggio’s nickname) the world of football was looking up. Italian football was looking up at him.

Football has a cruel way of telling stories. The fate-like way that actions transpire usually means heartbreak is never far around the corner. Even today, a day after beating their bitter rivals Manchester United, Jurgen Klopp’s Liverpool are drawn against his former side Dortmund in the last 8. Football has an interesting way of story-telling. And in the tale of Roberto Baggio, there are similar twists.

Juventus has tried to sign Baggio in 1985. Taking on their fierce and close rivals Fiorentina for his signature, they lost out after apparently coming close to finalising the deal. The tug-of-war between the two and the player was over. For now at least.

Fast forward 5 years and Baggio and his team had led Fiorentina to the final of the UEFA Cup. With performances lacking on home soil, and the possibility of relegation looming, on the continent the club had battled and fought to get to the first final between two Italian clubs in the history of UEFA competition.

Both games were played to the backdrop of an impending transfer, with Baggio seemingly close to being sold to their bitter rivals Juve, whilst after the first game, the Old Lady took a 2-1 lead into the second leg.

Shortly after a 0-0 draw (2 days, to be exact), and Juventus lifting the cup, it was announced that, for a world record transfer fee of £8million – eclipsing the £5million Napoli paid for Maradona – that Roberto Baggio would become a Juventus player. This left the Fiorentina fans in agony. Angry and ready for a riot.

The scenes next were nothing short of astounding. The streets of Florence were packed with supporters, and the stadium doors and surrounding areas were only enough to keep the chairman of the club, Flavio Pontello, safe from the baying pack of Viola fans. The poor performance in the league, and the desperate loss to their rivals was nothing compared to the owner cashing in on their prized asset, their perfect possession. Roberto Baggio was a Juventus player, and the fans across Florence could take no more. 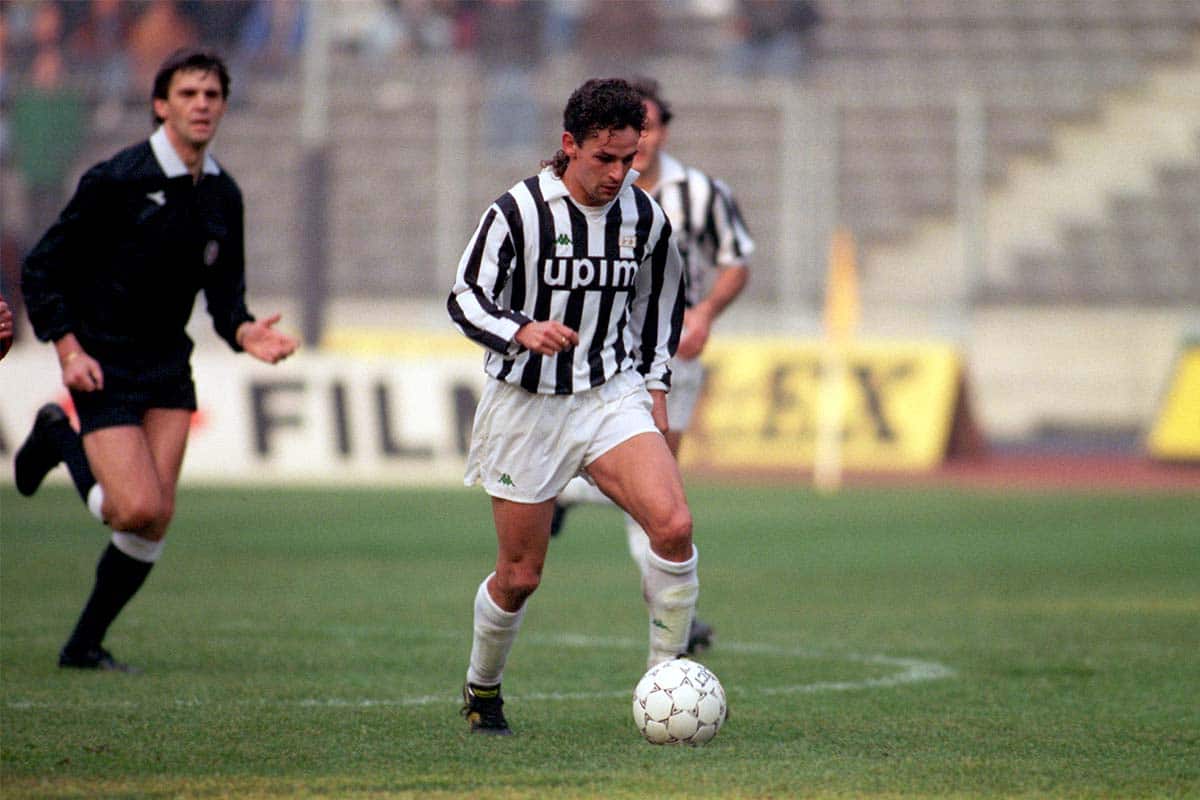 The Divine Pony’s performances for Fiorentina had led the club to some terrific highs, yet whilst some players stay as one club men, Roberto was destined for much more.

The poster boy of Italian football never was the same after his initial injury as an 18 year old, but his dazzling displays across the world meant that we will never miss how good Baggio could have been.

“I don't think I've seen a better performance from any player in any game I've ever played in” spoke David Platt, of his one-time Juventus team-mate, about a game that Roberto Baggio scored 4 goals in 20 minutes. Think of the players of the time, the players in the league. During that period, the Italian great was simply the best.

The story of Roberto Baggio to Juventus is one of begrudging betrayal and incredible hope. The hope of a boy looking to play with the stars, and the betrayal of a fan-base so supportive and much loved. When he left for £8million though, he was securing a future of a club on financial quick-sand. And of all of the miracles he pulled for Viola, maybe this was his parting gift and final farewell. A beautiful legacy, tainted.