Yet in January, the usually pleasant Argentine became somewhat irritated. And it was because of transfers. Well, more the lack of them at Tottenham Hotspur.

“If after we want to win titles we need to operate in a different way [in the transfer market],” he said. “At the moment we operate in the same way as we operated in five years ago when we arrived.

“The other day I saw a stat about how the biggest teams in the last ten years in England and Europe spend money. I think we were on the bottom.”

Fortunately for Pochettino, Spurs are set to end their self-imposed transfer ban this summer. There haven't been any incomings at White Hart Lane, via Wembley, in the last two windows. Lucas Moura's arrival from Paris Saint-Germain on January 31, 2018 was the last time Tottenham entered the wild west of the transfer market and returned with a prize.

Several names have been linked with Spurs over the past month, many of them wildly optimistic. Even if Daniel Levy does dust off the club wallet and searches down the back of the sofas in the new stadium for loose change, it's unlikely Tottenham will be spending hundreds of millions.

So reports in Italy that Spurs are considering a move for FC Københaven star Robert Skov are certainly intriguing. Only 22 years old, the Dane has been hugely impressive in the Superligaen this season and, perhaps most importantly, would only cost around £5million.

Such a fee would appeal to Levy; given the riches of the Premier League, it would be a low-risk deal. And such a player – one who needs to be moulded into a star – would appeal to the project manager in Pochettino.

Spurs would need to act swiftly, though. Several sides from Serie A, including Fiorentina, Atalanta and Bologna, have all been linked with Skov. So should they take the jump?

The future of Christian Eriksen at Tottenham is very much uncertain. The Spurs star is out of contract in the summer of 2020 and talks regarding a new deal have stalled. Real Madrid's continued interest is a problem, too.

It would be logical to assume, then, Skov could be a replacement for Eriksen. A Dane for a Dane. However, he is a very different player to the 27-year-old.

Firstly, he is stationed out on the right flank in a 4-4-2. Secondly, he is left-footed. And thirdly, he lacks the creativity that has made Eriksen one of the best players in Europe. 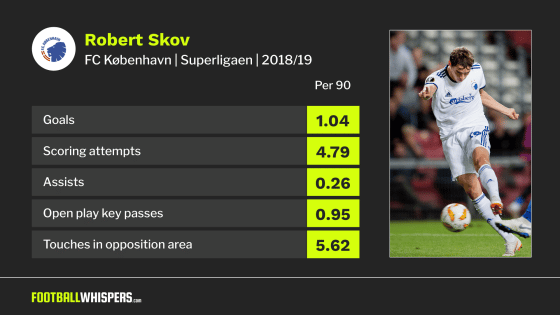 Fourthly, though perhaps most importantly, Skov is a far bigger goal threat than Eriksen. This season he has struck 24 times in 26 league games; finding the net every 85.87 minutes.

Of course, the Danish top flight is a weaker competition than the Premier League. But that output is impressive no matter the opposition, as are the following numbers.

That's a logical question, especially given what Københaven are set to demand for Skov. Ultimately, there is no simple answer, just more complex issues.

The biggest is whether this is just a one-off, a freak season. Over the years, several players have enjoyed a stellar campaign only to fade back to their usual level of performance.

There is certainly evidence to suggest Skov is overperforming this term. Of his 26 goals in the Superligaen, half have come from outside of the penalty area, either from open play or set pieces. Such a feat is unlikely to be repeatable, especially if he were to move to the Premier League.

And of the 13 goals he's netted inside the 18-yard box, five have come from the penalty spot. So in open play he's only scored eight times in the area.

But for a midfielder, that's a good return, right? Yes, but also no. Skov may be penciled in on the right side of a midfield four on team sheets, however, the reality is that he often becomes the furthest man upfield for Københaven.

The below is a map of the average player positions for the Danish side's 6-1 win over Odense BK, a game in which Skov netted a second consecutive league hat-trick. Skov is No.29. 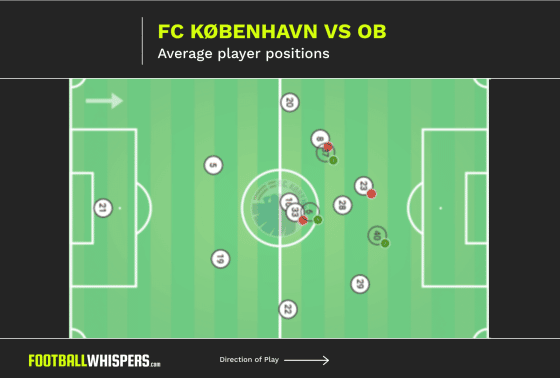 As you can see, the ‘midfielder' is stationed almost in line with striker Jonas Wind (No.23). And this season, from that position, he often receives the ball, shifts inside onto his stronger left foot and fires towards goal.

It's paid off handsomely and his effectiveness as a ‘false winger' is something that may pique Pochettino's interest as, earlier in the campaign, Son Heung-min performed a similar role for Spurs, as discussed here.

Should Spurs make a move?

Almost certainly. Skov is not the finished article but could prove a useful addition for Pochettino. He is very different from Spurs' other options for the right flank – Son, Erik Lamela and Lucas – and would improve undoubtedly improve working under the Argentine.

The raw attributes are there: Skov is an excellent free-kick taker, something that would prove invaluable if Eriksen departs, is technically gifted and at 6ft 1ins has the physical profile required to go up against the most battle-scarred Premier League defenders.

And at just £5million, Skov is the ideal way for Spurs to dip their toe back into the shark-infested waters of the transfer market after an 18-month absence.