Whatever Rob Green has achieved – or goes on to achieve – in his career he will always be remembered for that night in Rustenberg when he let Clint Dempsey's daisy cutter through his grasp to gift the USA a point against England in their 2010 World Cup opener.

That night Green became a pariah on the international scene. He has won just a solitary cap for the Three Lions in the seven years that have followed, despite being in fine form for the clubs he has represented. He has been viewed as damaged goods ever since.

However, the reality could not be further from the truth. At present Green can be found hunting his fourth promotion from the Championship with Leeds United where he has just extended his contract following a fine first season at Elland Road.

Like Green, Leeds have gone through hard times in recent years but, together, they are bouncing back under Garry Monk and could yet return to the Premier League next season.

Leeds have conceded fewer goals in 2017 (12) than any other @SkybetChamp side.

If Neil Warnock is the man you'd want in your dugout as a promotion-hopeful Championship side then Green is the player you'd want between the sticks. The evergreen keeper has won promotion from the second tier on three occasions – with Norwich City, West Ham United and Queens Park Rangers – and boasts more than 600 games in English football. What he does not know about the second tier isn't worth knowing.

That experience is invaluable to any side but particularly in a side made up of players who have come from Serie A and beyond. You don't have to be a Championship expert to know that the division is a dog-eat-dog, 46-game marathon where the right mentality counts for as much as good technique.

So in a Leeds squad which includes 13 different nationalities and players who have been brought together from far and wide throughout several different managerial reigns, the knowledge and know-how of an experienced campaigner like Green is invaluable.

Teams that win promotion tend to have those reference points. An example being one of Green's former sides, Queens Park Rangers, who were stuffed full of them when they won promotion to the Premier League under Harry Redknapp in 2014. Seven of the starting XI that day, plus two subs, had promotion medals from the Championship already.

It is something Leeds boss Monk hailed after the stopper's performance in last weekend's 2-0 win over promotion rivals Brighton & Hove Albion.

“Greeny's been tremendous,” he told BBC Sport. “I brought him in: number one, because I think he's a good goalkeeper and he was going to help us and number two as well, just the way he is, his experience and how he is as a professional, the example to set and he's doing very well and he deserves that.

“We're all very happy for him and delighted for him, he's been important to us this season and he'll continue to be important to the club in the future.” 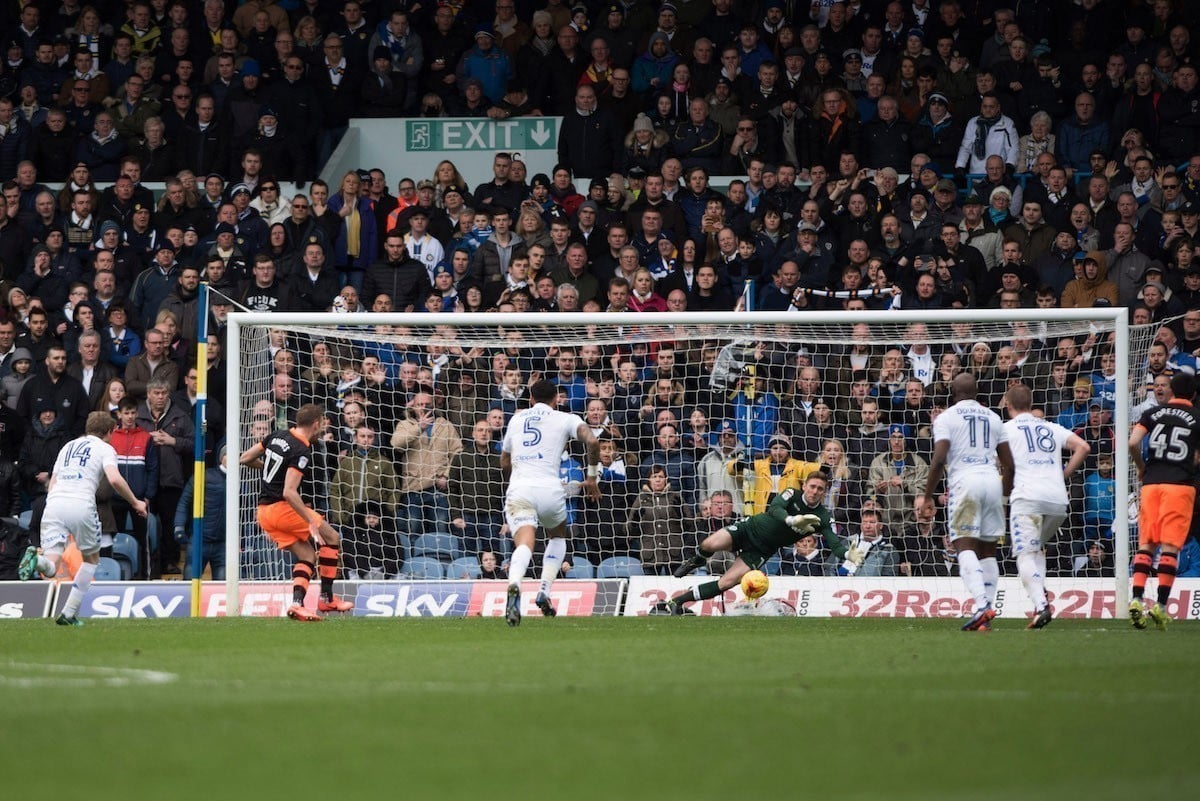 We have already ascertained that Green's mental attributes count for a lot in this Leeds side. But the former England international is making a big contribution on the field too.

With 14 clean sheets to his name this term, Green has the third-highest number of shut-outs in the division behind Brighton's David Stockdale (17) and Derby County's Scott Carson (15) – another former England international tainted by a high-profile error for his country.

The reason that matters is that the Yorkshire outfit are not among the Championship's highest scorers. With 56 strikes in 38 league games they average 1.47 goals per game making clean sheets more important than ever.

Most impressive, though, is Green's save percentage. Leeds have faced 145 shots in the matches the former West Ham Player of the Year has faced. Green has stopped 109 of those, giving him a save percentage of just over 75 per cent.

How does that compare to the rest of the Championship?

Based on the goalkeeper which has played the most games for each club, Brighton keeper Stockdale comes out on top with 76.15 per cent. Reading's Ali Al-Habsi is second with 75.96 per cent, Pierlugi Gollini of Aston Villa (currently on loan at Atalanta) is third with 75.36 per cent, fourth is Derby's Carson with 75.32 and Green stands fifth with 75.14 per cent.

Can we all just appreciate Rob Green has 14 clean sheets for Leeds this season. At 37yrs old, still probably best 'keeper in league. #lufc

Getting over the line

With eight games to go in the Championship, Leeds are firmly ensconced in the top six – eight points clear of a Fulham side trying to break into the play-off places.

The pressure will only increase from here on in. Leeds are eight points behind second-placed Brighton but everyone has blinked in the automatic promotion race in recent weeks. Indeed, of the top six only the Whites are unbeaten in their last six games.

Green is used to this. He will know the demands of the run-in with promotion on the line and Monk, just nine months his keeper's senior, will lean on the Chertsey-born stopper in the run in.

It is more than a decade since Leeds were last chasing promotion to the Premier League. In 2006 the Whites reached the Championship play-offs under Kevin Blackwell with veteran Scottish international Neil Sullivan in goal. Leeds fans will hope that is where the similarities end though.

A 3-0 defeat at the Millennium Stadium preceded their slide into League One. As a man unfairly defined by his past Green will be looking forward rather than back too.

NOW READ: IS THERE MORE TO LEEDS UNITED THAN CHRIS WOOD'S GOALS?