Of the myriad problems that encircled Leicester City last year, the wayward form of Riyad Mahrez was one of the most baffling.

The Algerian playmaker, whose creativity and partnership with Jamie Vardy lifted the Foxes to the Premier League title in the 2015/16 season, lost his way last year.

As Leicester struggled to meet heightened expectations and function efficiently without influential midfielder N'Golo Kanté, Mahrez became a sullen shadow of the bewitching creative spark who dazzled the King Power Stadium during that historic title triumph.

He looked destined to depart the club this summer but, despite leaving international duty to force through a move on transfer deadline day, he remained a Fox.

An unhappy one, yes, but still a Fox.

This season, Mahrez has been a mixed bag. Exciting glimpses of his best form have been interspersed with anonymous displays couldn't save Craig Shakespeare.

In recent months, though, the 26-year-old has shown encouraging signs of life as speculation over a January exit begins to swirl. He scored in the EFL Cup victory over Leeds United and netted a late equaliser to salvage a point against West Bromwich Albion. He has also scored three in his last four games. Seemingly, he is coming back into top form. William Hill lets you bet on the Premier League matches and Mahrez is often good value to score first.

Against Everton, he provided the assist for Jamie Vardy's opener as Leicester launched Claude Puel's reign in style with a 2-0 win.

And while Vardy's contributions this season are undeniable, with six goals to his name already, has Mahrez improved from the ineffective player that was dropped by Claudio Ranieri last December for a lack of effort in training?

Showing Glimpses Of That Mahrez Magic

Last season, Mahrez managed ten goals in 48 appearances, which paled in comparison to his previous campaign's haul of 18 in 39, dropping his goal to game ratio of 0.46 to just 0.21.

The Arsenal transfer target's expected goals per 90 minutes also dropped markedly. From an impressive 0.35 xG per 90 rating in the 2015/16 campaign, the following year saw it decrease to 0.28, as per Understat.com.

While Mahrez was a productive goalscorer for the Foxes during their march towards domestic supremacy, as their title defence wilted, so too did their most effective attacker.

This season, Mahrez's xG per 90 has continued to wane and currently sits at 0.27. However, his expected assists per 90 has improved from 0.20 last season to 0.26, suggesting that he is starting to recapture some of the ingenuity that saw him create 11 goals in the 2015/16 campaign en route to scooping the PFA Player of the Year Award.

But what does that mean exactly? Well, although quite established itself fully in mainstream football analysis, the xA metric is particularly useful when measuring a player's creativity as it places a value on the quality of chances they produce.

Operating on that rationale, Mahrez is creating slightly better quality chances for his team-mates compared to last season.

As you can see, in the 2016/17 season (the first graphic below), Mahrez was guilty of missing a lot of chances well inside the penalty area – opportunities that would certainly qualify as ones you would him expect him to bury. 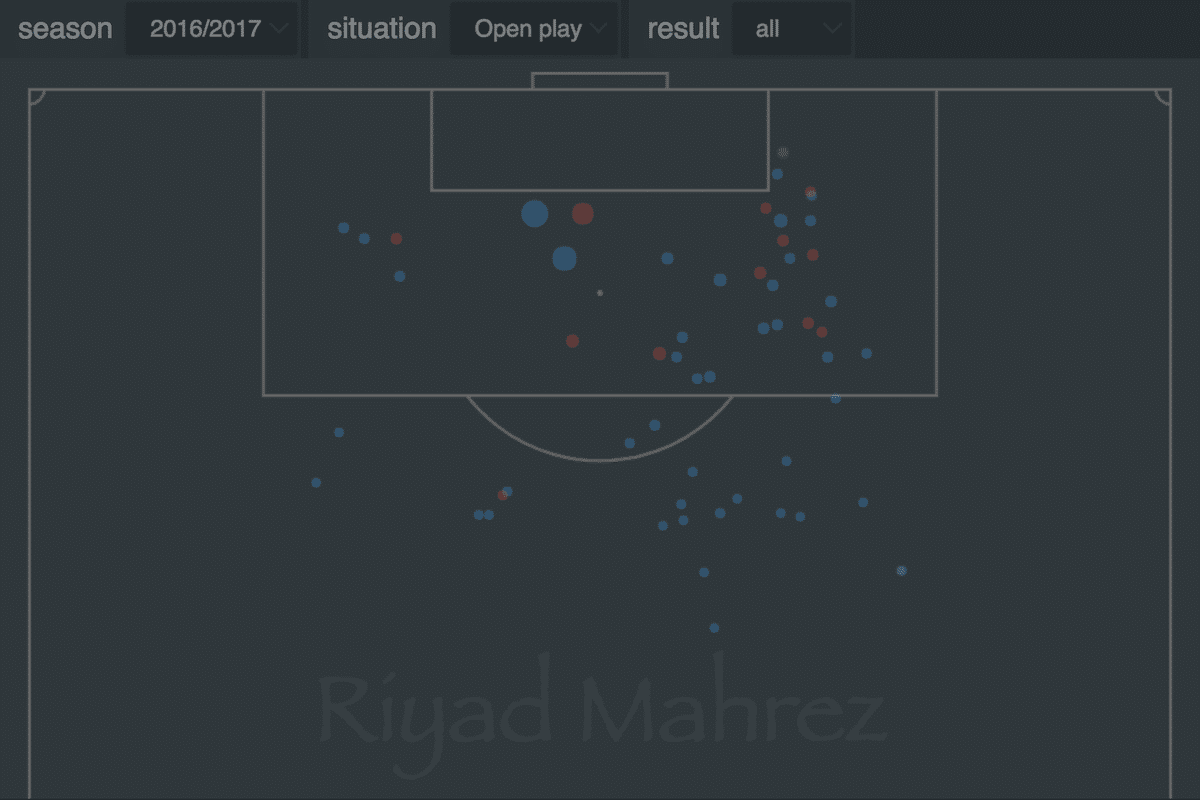 This season, there are less glaring misses and, while the two big red dots from around 12 yards in the image below show that he has still been guilty of passing up great opportunities, the majority of his shots have been blocked.

The logical conclusion here is that a lot of his chances in the box haven't been converted because of strong defending rather than inaccurate finishing. 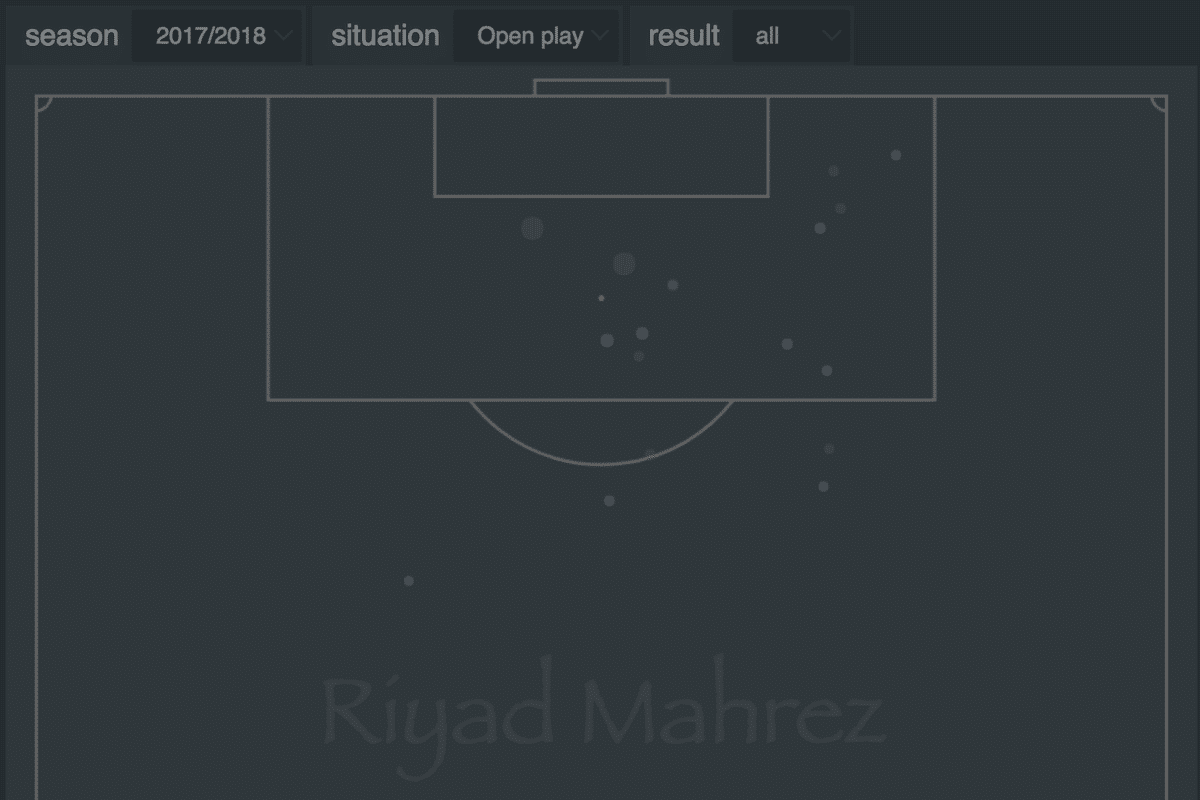 Strip away the statistics, though, and you still get a clear picture of Mahrez's improving form.

The former Le Havre winger has four assists to his name already compared to three last year, but looking beyond that number and analysing how they came about also underlines his importance to this side.

Below is a screenshot of the action right before Mahrez sets up Vardy's goal against Everton. As Demarai Gray surges forward, the Algerian keeps his width to open the space for the pass.

As a winger, Mahrez knows exactly where he wants to cross from and, having spotted Vardy's run into the box, has a picture of what he wants to do in his head before he even receives the ball. 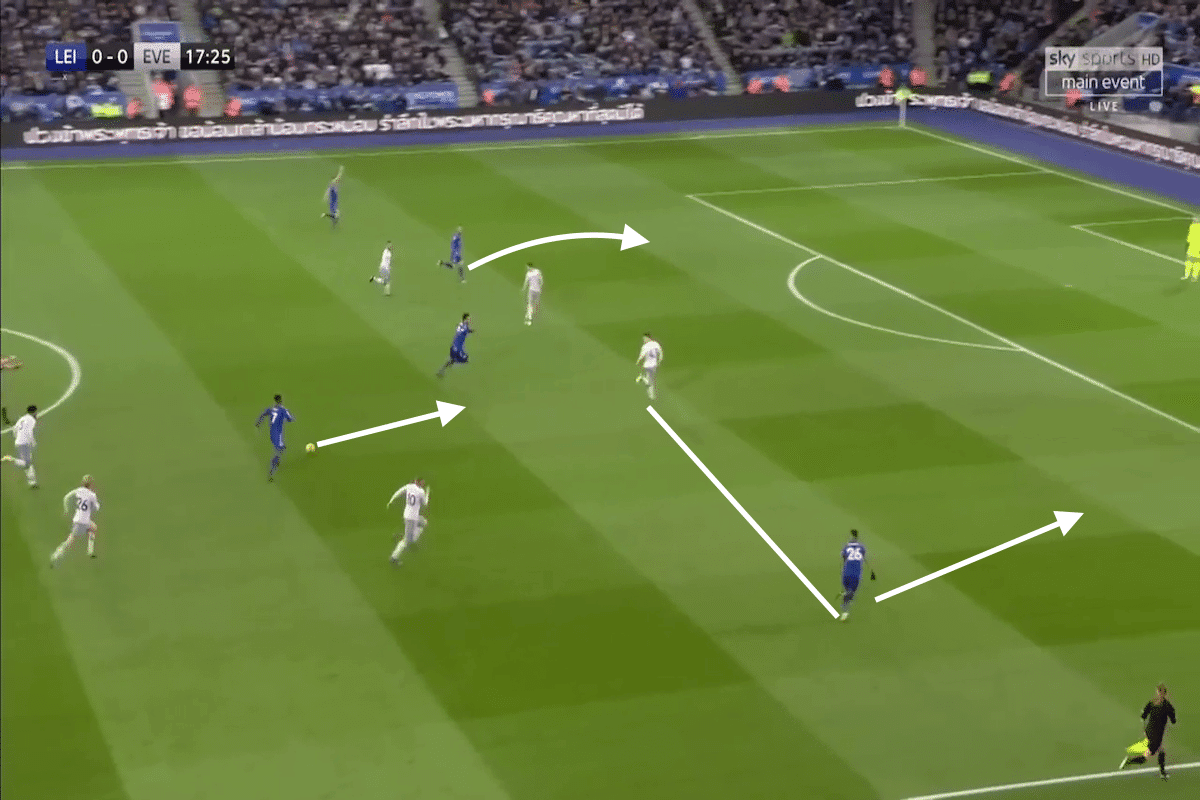 When the pass comes to him, the weight and shape of his cross are so precise that Vardy is left with the simplest of close-range finishes, without having to break stride or take a touch. 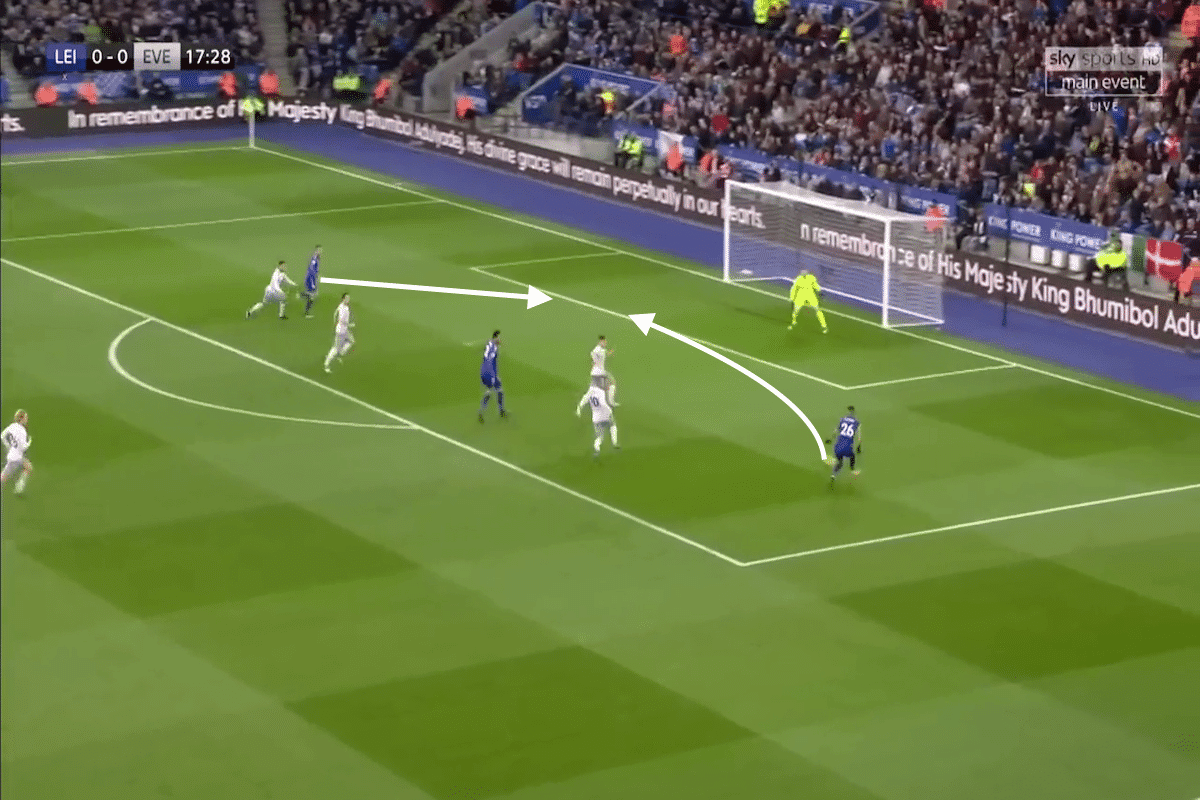 Mahrez is known as one of the Premier League's best dead-ball specialists and has reinforced that perception this season. Two of his assists have been from corners, the first for Vardy against Arsenal and the second teeing up Harry Maguire in the win over Brighton & Hove Albion.

Mahrez also set up Shinji Okazaki's winner against Swansea City, when he backpedaled to meet Islam Slimani's clip to the far post before laying it on a plate for the Japan international to seal the points.

He has had his troubles and his long-term future is still uncertain, but Mahrez's contributions have been decisive this season.

Ultimately, in the modern game, his campaign will be measured against certain statistics, but his current numbers definitely do not indicate a dramatic dip in form.

He is averaging 1.4 key passes per game, which is the same as last season. The dribbles completed column is almost identical, with last year's 2.2 edging his current rate of 1.9 ever so slightly.

However, some of Mahrez's other work, which would be easy to miss, is particularly impressive. Not renowned for his tenacity or ball-winning skills, he has actually recovered possession more times in the final third than any other player this season. He's also won the ball frequently in midfield.

And with Leicester a team who love to make rapid defence-to-attack transitions as soon as they win the ball, Mahrez's ability to break up the other side's passing is a highly valuable attribute.

Puel has a reputation for breathing new life into playmakers – he was responsible for Hatem Ben Arfa's scintillating form at Nice – and the former Southampton boss can guide Mahrez back to being one of the most feared technicians in the Premier League.