Newcastle United face a long trip to take on Brighton & Hove Albion in the Premier League on Sunday afternoon, in a battle that will pit last season's Championship top two against one another.

The Magpies took advantage of some sloppy late-season form from the Seagull's to pip Chris Hughton's men to the Championship title last term. Brighton will be hoping to exact revenge at the AmEx Stadium when the two sides meet this weekend.

Key to the home team's hopes of overcoming Rafael Benítez's side will be the continued good form of attacking midfielder Pascal Groß, signed for a bargain fee of just £3million from relegated Bundesliga outfit Ingolstadt.

Newcastle's creative burden falls to Scottish international wide man Matt Ritchie, a 2016 signing from Bournemouth who starred in the club's promotion push last season and has been equally effective thus far back in the top flight.

But which of the two men stands the best chance of helping their side secure three points on Sunday? We've delved into the stats to find out. 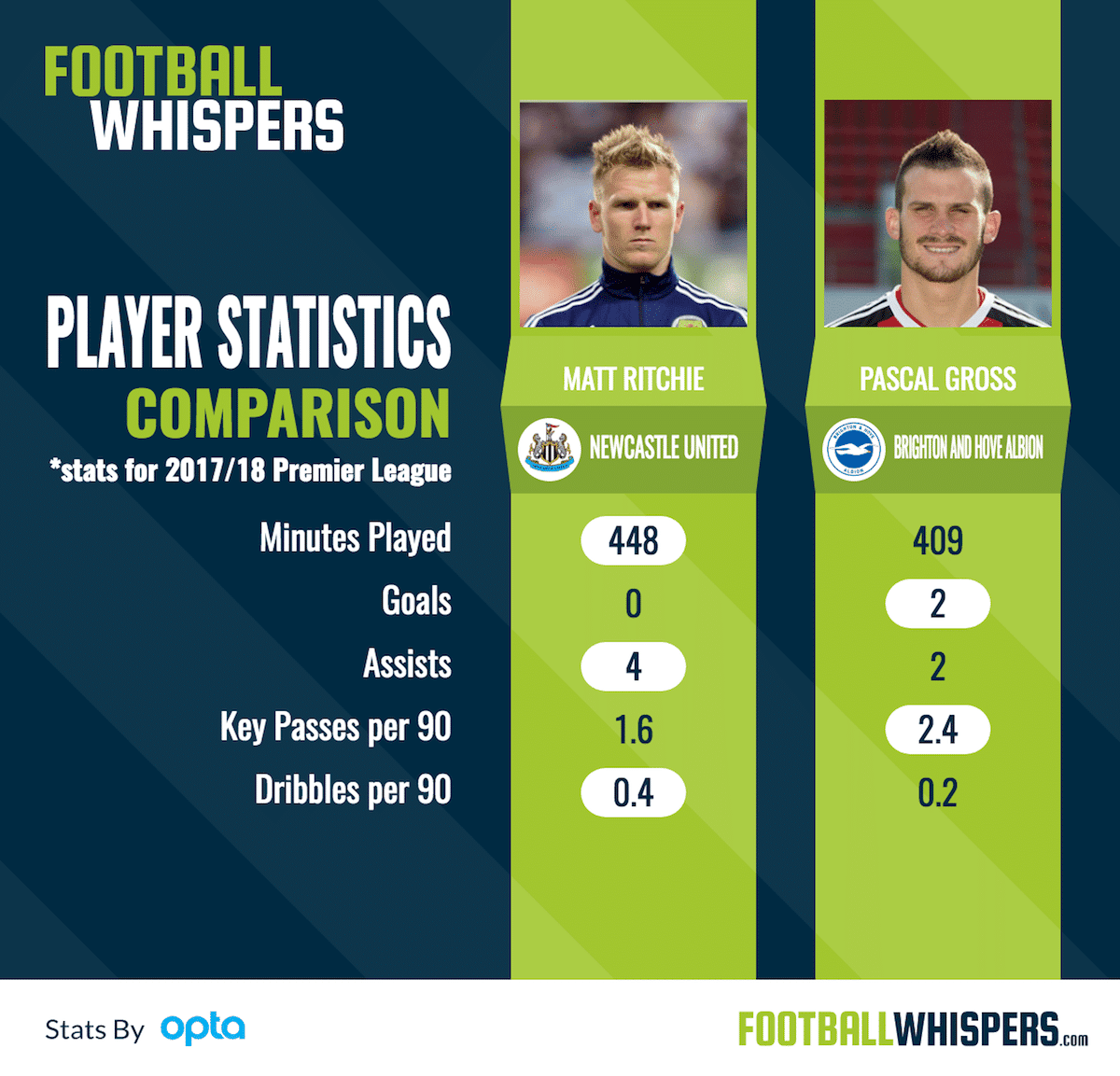 As the above graphic shows, Gross is a more direct goal threat, scoring twice already in 2016/17, accounting for half of Brighton's total goals – the other half he has assisted.

Ritchie is yet to get off the mark himself this season, but he has been no less effective his attacking play, proving the creative fulcrum of Benítez's side with four assists.

Heading into the sixth round of Premier League fixtures, that return had the 28-year-old tied with Manchester City‘s David Silva, and behind only Manchester United‘s Henrikh Mkhitaryan (five).

Groß, however, is perhaps a victim of Brighton's lack of a truly ruthless, Premier League-level finisher in attack, as he in fact creates more chances on average than Ritchie, despite the latter having twice as many assists to his name.

Ritchie, on the other hand, makes an average of 1.6 key passes per 90, yet figures highly in the division's assists chart.

When it comes to dribbling, neither man is Diego Maradona, but Ritchie edges out Groß with 0.4 successful take-ons per 90 to the German's 0.2.

This is perhaps owing to Ritchie's wide starting position. His station on the right of the Newcastle attack affords the Scot more opportunities to run at his opposing full-back than Groß, who primarily plays behind a central striker.

Heralded by many as the signing of the season, Groß arguably poses a more rounded threat than Ritchie, but neither man should be underestimated when Brighton and Newcastle meet.