Following a victory on the final day of the 1. HNL, Rijeka head to Hajduk Split to play the final of the Croatian Cup on Thursday, 26 May. Masters from the Sea ended the regular season with a defeat.

Another Croatian Cup for Hajduk Split

Rijeka are on a streak of three unbeaten games and registered two victories in the last five attempts. However, Hajduk Split were good enough to play 14 games without a loss before the previous defeat. Masters from the Sea also held the string of six consecutive victories of 1. HNL at Stadion Poljud. In H2Hs, Hajduk Split also dominated Rijeka’s Whites with three wins in the last five meetings. Hence, we expect Hajduk Split to be Crowned the title in front of their home fans.

Both sets of scorers to shine

Rijeka failed to score in the previous H2H but they have been on the scoring side in all of the latest visiting H2Hs. Rijeka’s Whites have also netted the ball in four of the recent five outings. On the other hand, Hajduk Split’s attack seems prepared as they produced a flow of scoring in all of their recent attempts and the latest H2Hs against Rijeka. So a BTTS outcome

Rijeka vs Hajduk Split: Check out the best odds and the latest stats

Rijeka vs Hajduk Split: Check out the team lineups

Rijeka’s White won the last game with a narrow lead of 1-0, scoring in the second minute of the duel against Dragovoljac. Securing 20 wins and five draws, the team ended the season in fourth place on the table. The club boss Goran Tomic will have zero fitness issues in the squad coming into this game.

Master from the Sea could extend the unbeaten sequence to the last game of the season and lost by 3-1 against the champions, Dinamo Zagreb. But Hajduk Split still managed to conclude the campaign at the second position. All of the players will be ready to make an appearance in this game.

Questions About Rijeka vs Hajduk Split 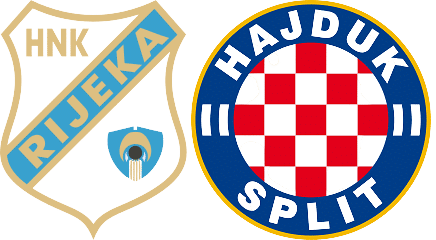 Where is the game being played? Stadion Poljud (Split).