It’s easy for an £11.5million signing to get lost in the big money moves from the summer of 2017. It’s also forgivable, and perhaps understandable, to overlook a player with three Premier League strikes to his name when the likes of Àlvaro Morata are finding goals at an eye-watering rate.

It’s quickly become apparent that the one-time Chelsea transfer target is one of the bargains of the season and Watford may have a task on their hands keeping him at at the club beyond the end of this season.

This weekend's match against Arsenal gives him the opportunity to showcase what he can do against one of the best teams in the Premier League.

Watford drew 3-3 in their season opener against Liverpool, another team aiming for a top four finish, Richarlison made his debut, playing 40 minutes off the bench when Roberto Pereyra had to come off injured.

The 20-year-old was a nuisance thoughout and did have a hand in the stoppage time equaliser.

He won’t be the only in-form striker on show on Saturday evening.

The visitors to Vicarage Road have been in superb form since their defeat to Liverpool at the end of August. Since then the Gunners are undefeated in seven matches having won six of them. In fact, they haven’t conceded a goal in the Premier League since then.

Summer signing Alexandre Lacazette has wasted no time coming to terms with the Premier League.

The French International, who cost a club record fee when he signed from Lyon, has four goals so far this term and he’s one of the reasons the club haven’t missed Alexis Sánchez.

Arsene Wenger recently revealed that the club may sell Sánchez and Mesut Özil, another contract rebel, in January. Something that didn’t seem possible just 12 months ago. But with the attack no longer reliant on the Chilean thanks to the goals of the Frenchman, it’s a real possibility. 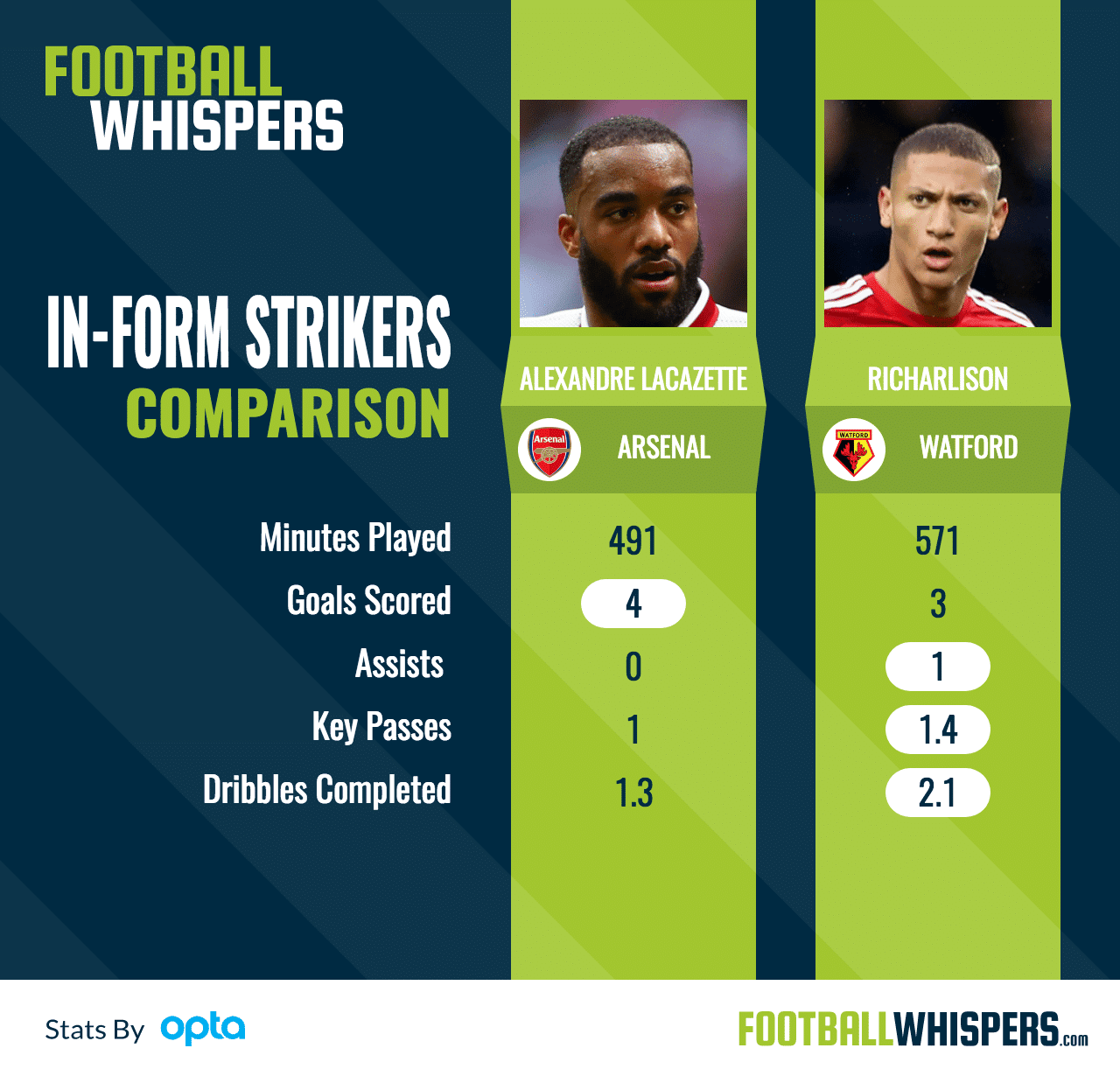 When the two forwards are compared it's the Watford man who comes out on top in everything other than goals. He's making more key passes and completing more dribbles per 90 minutes. Two strengths Arsenal should be wary of and look to prevent if they're to take all three points back to the Emirates.

Lacazette, on the other hand, is just a stone cold killer in the penalty area. He's averaging a goal every 122 minutes for a new team, in a new country playing in a different system.

It will be an intriguing watch on Saturday to see which of the two is the match winner; the all-rounder or the poacher.