There was a time, not too long ago, when Wilfried Zaha could rightly claim to be the best player outside the Premier League's top six.

Since he returned to Selhurst Park the winger has developed into the player Manchester United thought they'd signed back in 2013. But the Crystal Palace winger now has company.

For a time he battled it out with Riyad Mahrez for the crown but the Leicester City playmaker has been consistently inconsistent – it's perhaps why the soon to be 27-year-old hasn't managed to secure a move to a bigger club as he heads into the prime of his career.

Whereas Zaha, at 25 years old, has carried Palace for a number of seasons now, putting in man of the match performances on a regular basis. Although not single-handedly, the former Red Devil has managed to help Roy Hodgson's men climb the table this season after a poor start to the campaign.

His stats may be underwhelming, just the four goals and one assist, but context is very much necessary and it's his general influence on proceedings which benefit Palace the most.

His form this term saw him linked with big money moves to Tottenham Hotspur, Arsenal and Manchester City over recent months but when asked about his future in December he said he'd be staying with Palace.

Though that should be no surprise. After all, no player is going to come out and say otherwise.

However, football is perpetually moving and now many of the top clubs in England have their eye on a new, younger, more exotic player; Watford's impressive Brazilian Richarlison

The 20-year-old looked set to join Ajax in the summer before then Watford manager Marco Silva managed to convince the Brazilian to join him at Vicarage Road.

He arrived as somewhat of an unknown, like a number of other players who have joined the club under the ownership of the Pozzo family. Similar to the arrivals of Adalberto Peñaranda and Isaac Success in many ways.

Richarlison proved he was different. He made an impact against Liverpool on his debut and immediately looked as though he was readymade for the Premier League. He netted his first goal for the Hornets in the next match against Bournemouth.

Like Zaha, his form has caught the attention of those vying for a Champions League place. Reports this month implied Watford would demand a fee in the region of €50million to part ways with their 20-year-old sensation. It seems steep for a player with just six months of top flight English football to his name but he is a talent.

The Watford No.11 has five goals and four assists this term and in a feature on the site recently was named as one of the most well-rounded wide forwards in the Premier League.

He may have just one assist in his last 13 matches, leading to some suggesting the honeymoon period is over. But there's an explanation for his downturn in productivity.

He's been playing football since May without a break.In that time he's appeared in 3677 minutes which equates to 40 full matches. Combine that with the fact the team are in a rut and they've just sacked their manager and it's easy to understand why he's gone off the boil.

But make no mistake about it, the young Brazilian is a pretender to Zaha's crown.

Who is Most Ready For Big Move 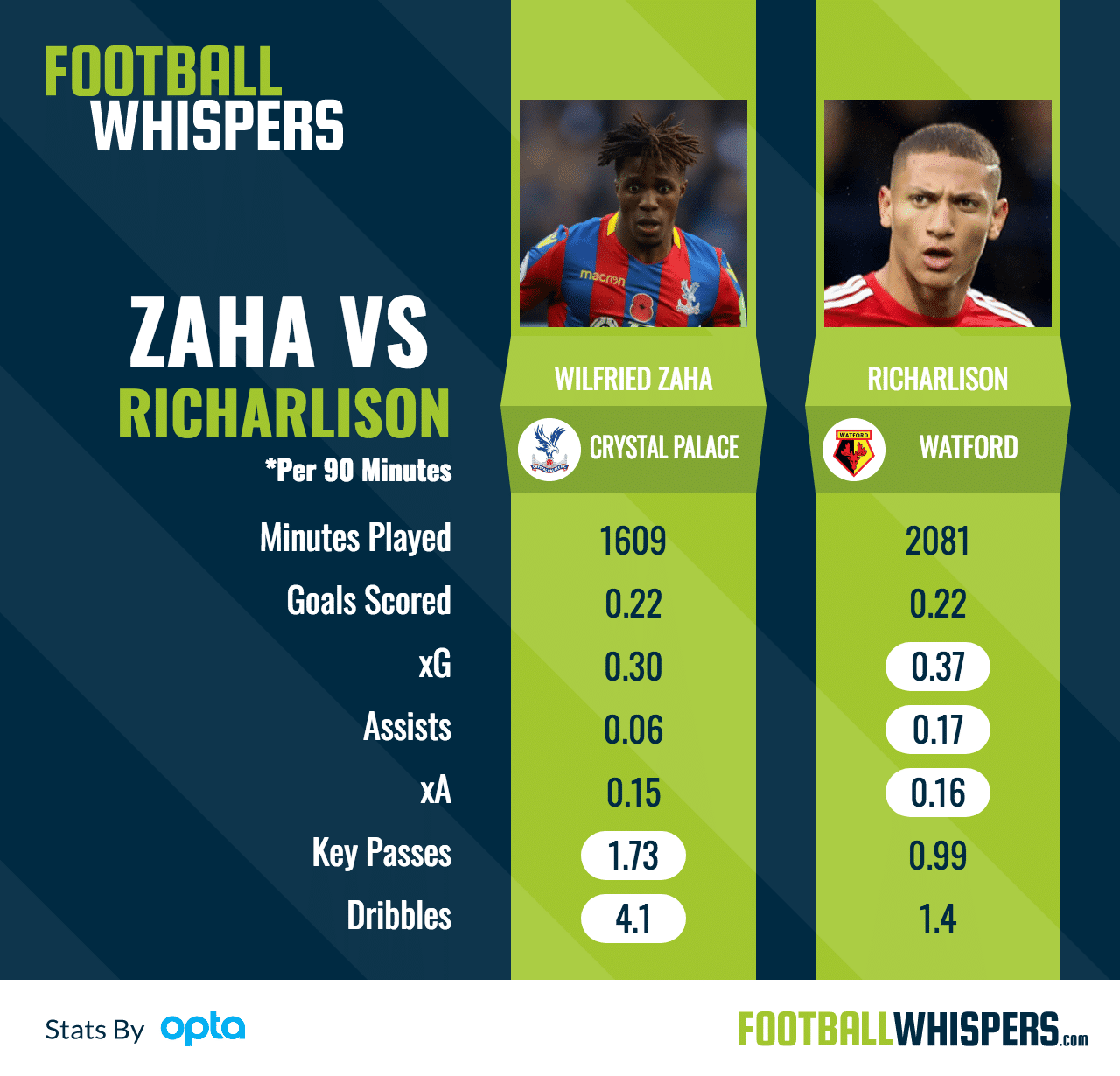 Zaha may have the experience in terms of age and time spent in the Premier League but you wouldn't know it when looking at their stats this season.

Richarlison has spent the majority of the season in a wide role whereas the Crystal Palace attacker filled in as a striker. And yet despite this, both have scored 0.22 goals per 90 minute and it's Richarlison who has a better xG90 (0.37 to 0.30).

It shows the Brazilian is finding himself in dangerous areas on a more frequent basis.

He also comes out on top when looking at assists and xA, proving he's much more than just a goal threat. He's a creator, too.

Zaha is the better when looking at key passes and dribbles per 90 but, on the whole, they're not too dissimilar in terms out output. Furthermore, playing for a better team you would assume both might improve their numbers.

Ultimately, if a club wants a player that is more involved in build-up play, then they should opt for Richarlison. He plays a higher number of passes per 90 minutes (26 to 18) and attempts fewer dribbles. If they want more of an individual, then they should spend your money on Zaha.

The likes of Chelsea, who have a solid defence but sometimes need the X factor in attack, and Arsenal, who play easy on the eye football but need a player to take it on themselves from time to time, would be better suited with Zaha.

Richarlison, however, would be at home with Man United, Man City, Liverpool and Spurs as part of a cog in a much bigger system.