Not since Abel Xavier in 2002 has a player moved across Stanley Park but, if reports in Brazil are correct, an Everton player could be making the move to Liverpool for only the fifth time.

UOL Esporte claim Jürgen Klopp recently had a meeting with Renato Velasco, Richarlison’s agent, at his house. The report goes on to state the Reds boss is a long-term admirer of the robust Brazil international and that while the player wasn’t actively seeking a move, he was keeping his options open.

Speaking ahead of the Merseyside derby in December, Klopp singled out the former Watford star: “Silva has the best Everton squad [I have faced], he brought in Richarlison… what a player he is.”

Marcus Alves, writing for UOL Esporte, claims the Everton striker has offers from Paris Saint-Germain and AC Milan while Barcelona are also keeping tabs on him. However, he’d prefer to stay in the English top flight.

The 21-year-old only moved to Goodison Park last summer for a fee believed to be in the region of £35million. Clauses included could potentially see that rise to £50million.

Amid speculation about his future, Richarlison took to social media to confirm he was happy.

But the reports in Brazil never claimed he wasn't. And his tweet didn't say he couldn't be happier. Everton was never going to be his final destination. His talent and ability wouldn't allow it.

While negotiations to sign Richarlison would be tricky, there are plenty of reasons why Klopp would be willing to sign off on such a deal.

It's no secret the Reds boss wants to bolster his attacking options this summer. Timo Werner has been a long-term target according to reports with his versatility being one of the big factors he's on Liverpool's summer wishlist.

It's something the Germany international shares with his Everton counterpart. Though primarily a wide forward, Richarlison has shown on numerous occasions, for both club and country, that he can lead the line.

The fact he'd be able to interchange with Sadio Mané, Mohamed Salah and Roberto Firmino gives him an ideal profile for a Liverpool forward. He could fill the false-nine role usually filled by the latter. 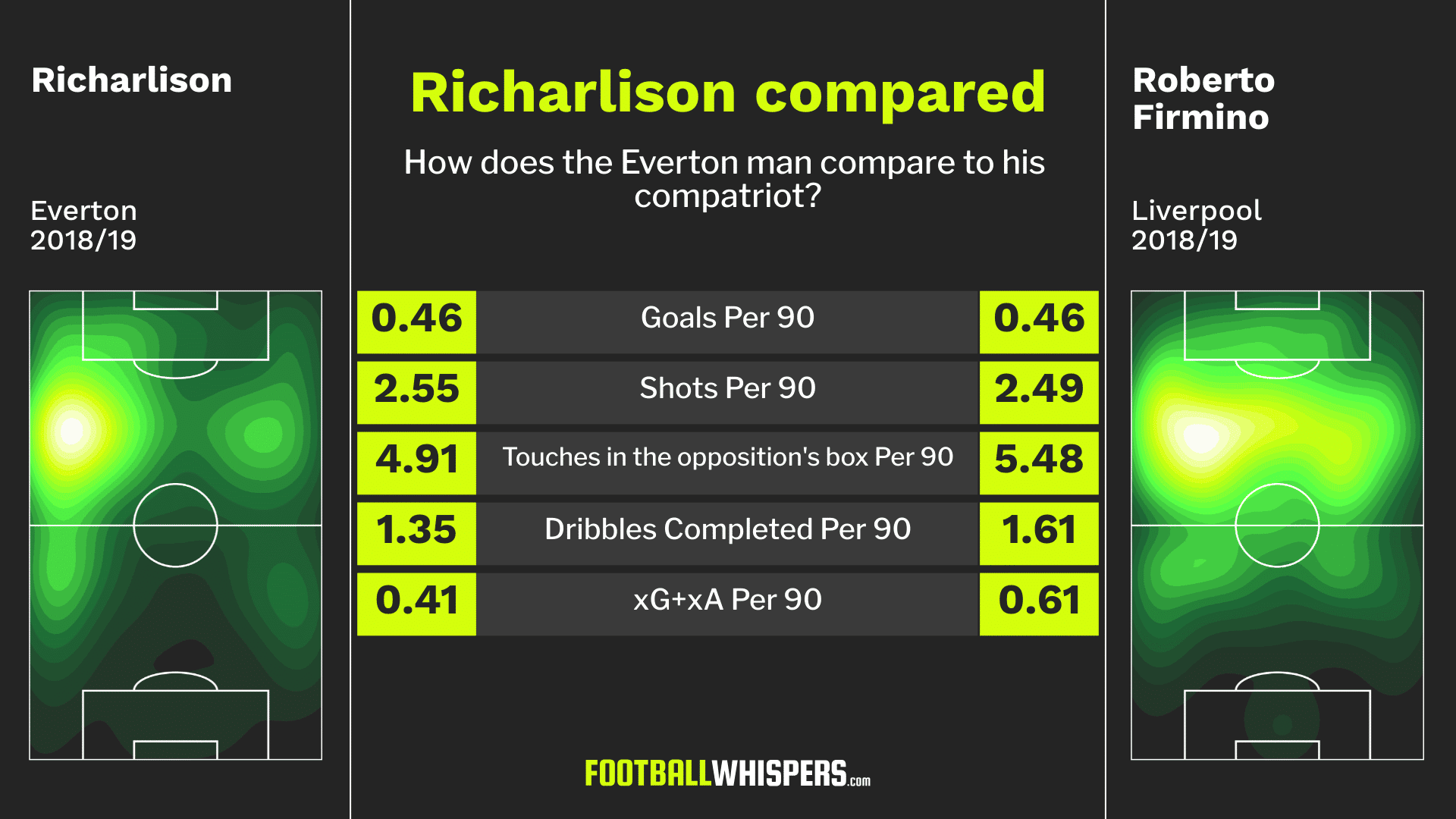 A snapshot of the two Brazilians can be seen above. Both have averaged 0.46 goals per 90 minutes this season but Firmino slightly trumps Richarlison in the other categories with the exception of shots.

However, stats are influenced by the systems the players are being used in. Richarlison is often Everton's main goal threat whereas Firmino is the third musketeer for the Reds so doesn't have to take as many shots.

Looking at those five stats in isolation, it would be easy to claim he's an ideal fit for Liverpool. But it's only when looking at his overall play that you realise there are a number of question marks that shouldn't be hanging over a £70million-rated player.

He attempts just 26.55 passes per 90 minutes and completes just 67.2 per cent of his passes. For context, Firmino's average this season has been 44.29 passes attempted with an 80.9 per cent success rate.

Liverpool dominate possession. Even the wide forwards, Salah and Mané, average over 30 passes per 90 and both complete at least 75 per cent of their attempted passes. How would Richarlison cope when seeing more of the ball and having to make possession stick?

Furthermore, the Everton man fails to create opportunities for team-mates. His expected goals assisted per 90 this season comes in at just 0.04. Mané's averaged 0.19, Firmino comes in at 0.23 and Salah tops the list with 0.29.

Again, stats depend on systems being used but it shows Richarlison's overall game could be improved.

These are areas he'd need to improve if he was to make the move to Anfield. However, his work rate and ability out of possession are two reasons he'd be an ideal fit for Klopp.

He wins possession back 2.82 times in the middle third on a per 90 minute basis; Mané (2.51), Firmino (2.45) and Salah (2.14) all fall short. But this could be down to the fact they don't need to win the ball back as often as Liverpool average eight per cent more possession per match meaning there are fewer opportunities to regain the ball.

Richarlison would fit in at Liverpool and he could be crafted into something special by Klopp.

He does deserve to showcase his talents in the Champions League, too, and a move to the Red half of Merseyside could see him fufil his true potential. But £70million is excessive and there are better value for money deals out there.