Honeymoon periods in football are increasingly short and in the case of Marco Silva at Everton that initial flood of excitement post Sam Allardyce has given way to reflection morphing into concern surrounding the Toffees.

Knee-jerk reactions to the defeat by West Ham United have been numerous and, while a little exaggerated and unfair, losing at home to, at the time, the Premier League’s worst team with a multitude of problems of their own, is worthy of a degree of alarm.

Defensive mistakes proved costly and a proportion of that can be attributed to a young goalkeeper and a new group of defenders, all under the age of 25, still striving for on-field understanding and chemistry.

That will come in time, but one of Silva’s calling cards when he took the job was his ability to inject energy into a team’s attacking performances. This was particularly pertinent for an Everton team who under Allardyce were predictable and frankly dull at times.

Silva’s approach at Watford, before it all fell apart, was about quick transitions from defence to attack and purposeful passing in possession. One major beneficiary was Richarlison, whose impact in the first 12 matches bore five goals and four assists.

Unfortunately for the Hornets, it wasn’t sustainable and as discord around Silva, who had at that point been keen to move to Everton, grew the Brazilian's drop in performance was symbolic of the team itself.

So when the Toffees agreed to sign Richarlison from Watford for a fee that could rise to £50million, many scoffed. The general consensus was Everton had hugely overpaid.

However, the 21-year-old, based on his instant impact, has been revitalised by moving to Goodison and that was rewarded with a call-up, and then full debut, for Brazil.

A three-game suspension curtailed his impressive start for Everton but Richarlison should return to the starting XI for their trip to the Emirates Stadium to take on Arsenal.

But whereas Silva has traditionally used him as a left-sided forward in a 4-3-3 – or variation of for Watford – there are calls to move the former Fluminense star into a central striking role.

It’s almost poetic that, over the other side of the field, is Theo Walcott; a winger who in his youth and throughout most of his mid-20s was locked in a narrative that he’d be better suited through the middle.

Richarlison, though, is a different beast to Walcott. He's more powerful and has the physically required to lead an attack.

So he could provide, at the very least, an additional striking option for Silva, if not a solution as Cenk Tosun struggles for form.

Turkish international Tosun hasn't netted from his 11 Premier League shots this season, and while that number is a slight on the creativity behind him, his display against West Ham counters that assertion: two glaring misses in particular revealed a striker low on confidence.

Tosun does plenty of off-the-ball work and he holds possession well – he does also have two assists this season. But a striker's currency is goals and at the moment he is flat broke.

And this is where Richarlison comes in. His somewhat unorthodox style doesn’t immediately exude that of a central striker, who needs positional discipline, patience and a wise football brain. Efficiency is vital when playing through the middle.

However, there are parts of the Brazilian’s game that aren’t always heralded and it's those attributes which Brazil boss Tite identified and trusted during the latest round of international fixtures.

Against El Salvador, Richarlison was played through the middle. And on his full debut for his country, with the famous No.9 on his back, the shirt worn by Ronaldo, he scored twice and won a penalty in a 5-0 win.

Of course, while the opposition weren’t near the equivalent quality of Arsenal, the experiment worked.

As the stills below show, he demonstrated neat link-up play and the ability to play as a lone striker. 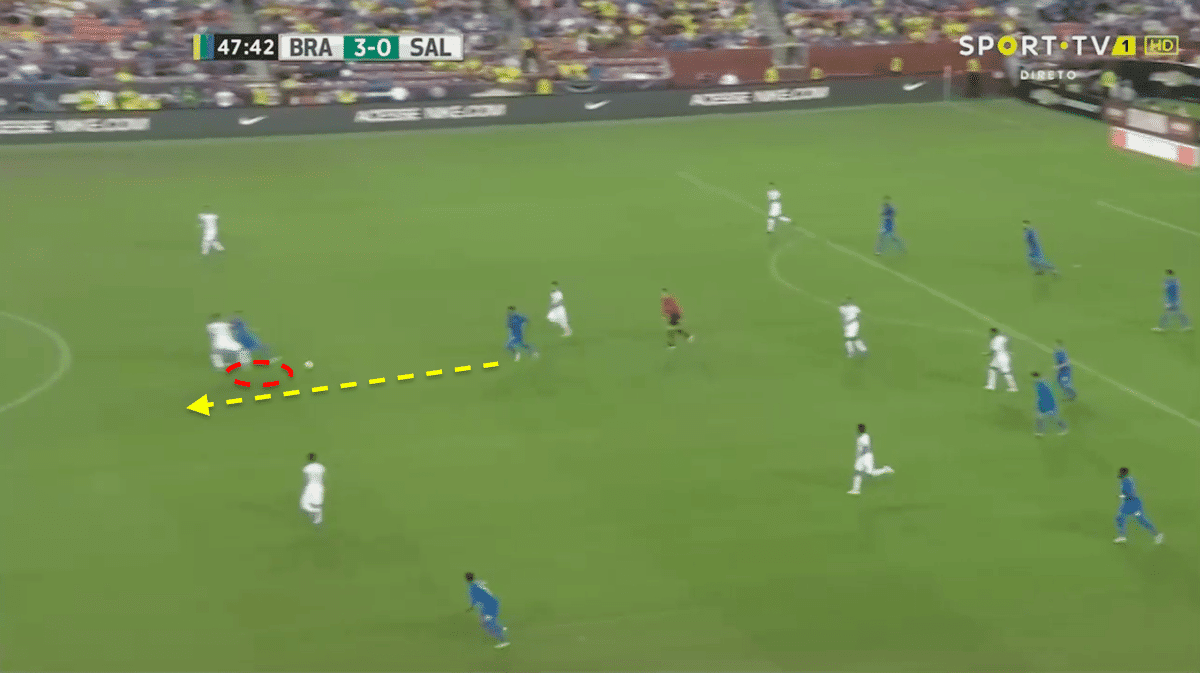 Here he has his back to a defender inside his own half but has the strength to hold off the challenge and keep possession. 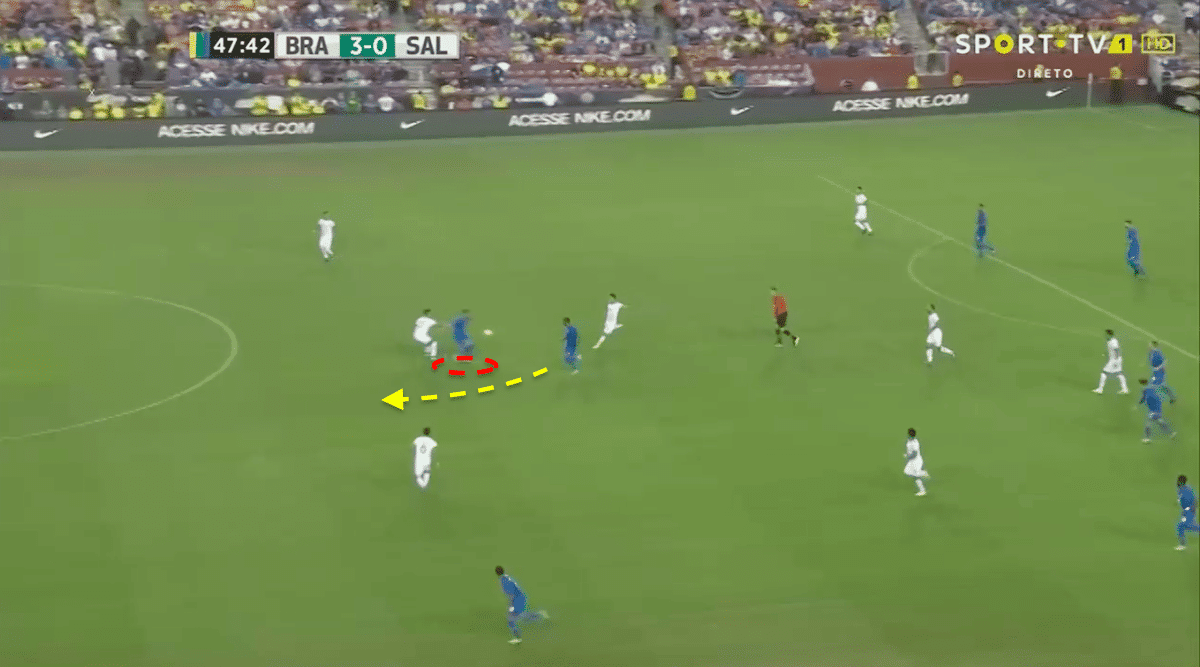 Richarlison then flicks the ball off to Juventus star Douglas Costa who has space to break into. Unfortunately for Brazil his touch is heavy and the move breaks down. 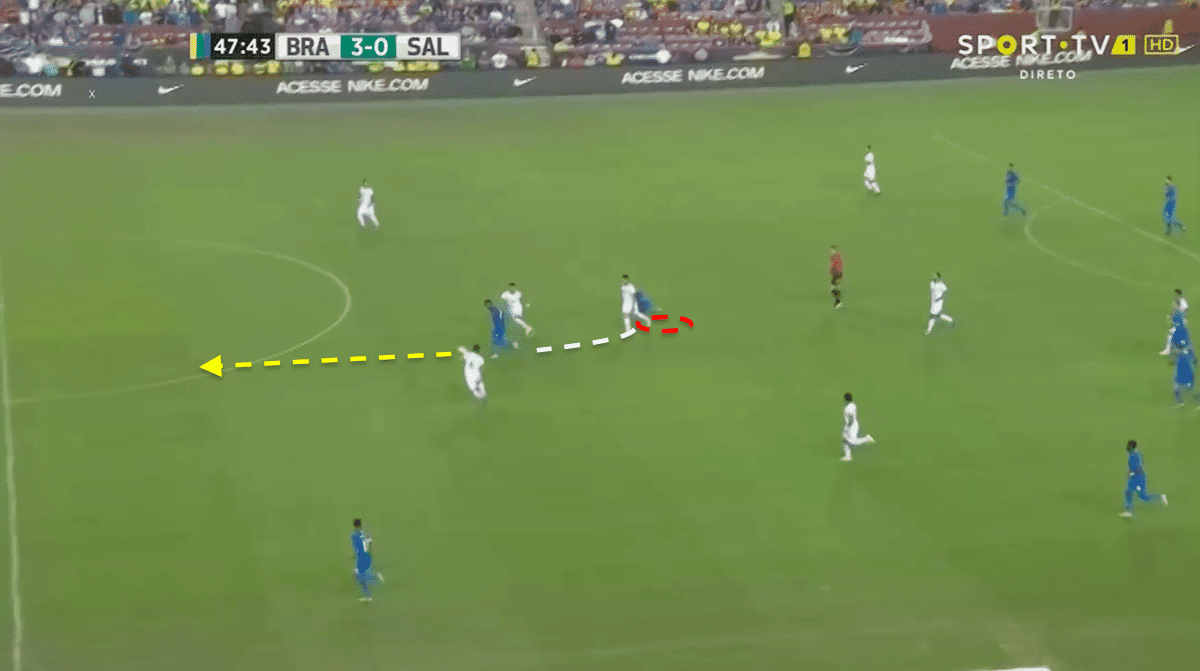 However, it demonstrates Richarlison's capability for holding the ball up and relieving pressure on his side. He is by no means perfect at it, but he certainly has the raw tools.

What was also evident in Maryland was his willingness to press from the front, something Silva likes his side to do.

Despite this being a relatively innocuous area for El Salvador to have the ball, he makes a sprint from an attacking position to win back possession. 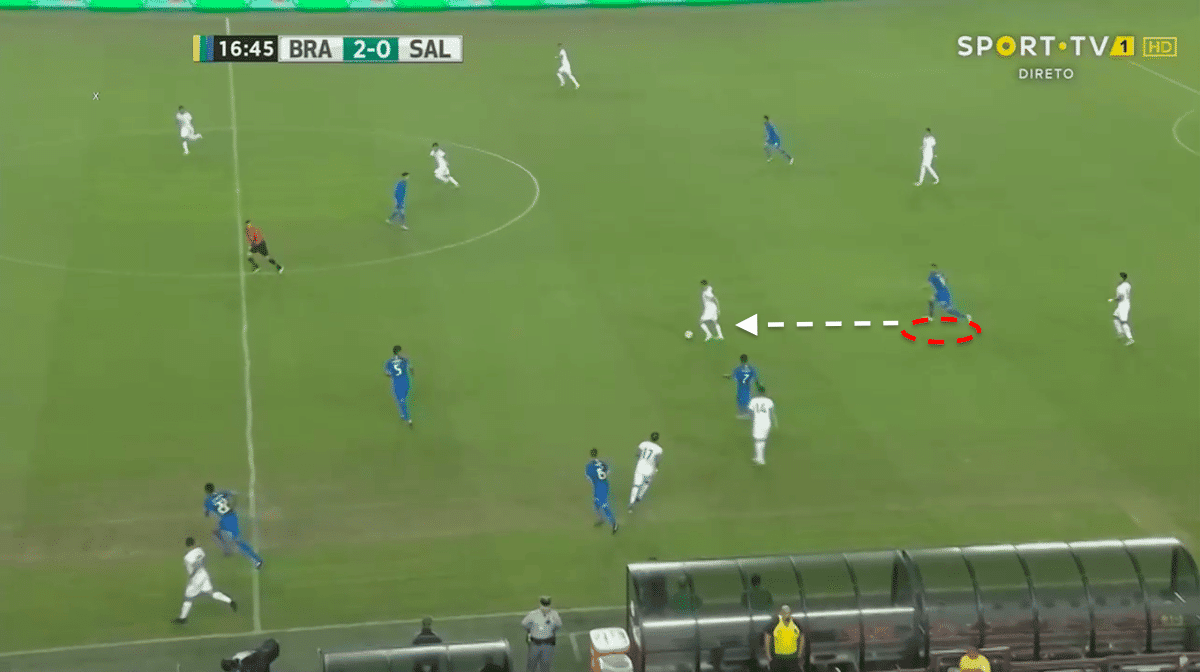 The midfielder is caught out and Richarlison nicks the ball away from him before being brought down. 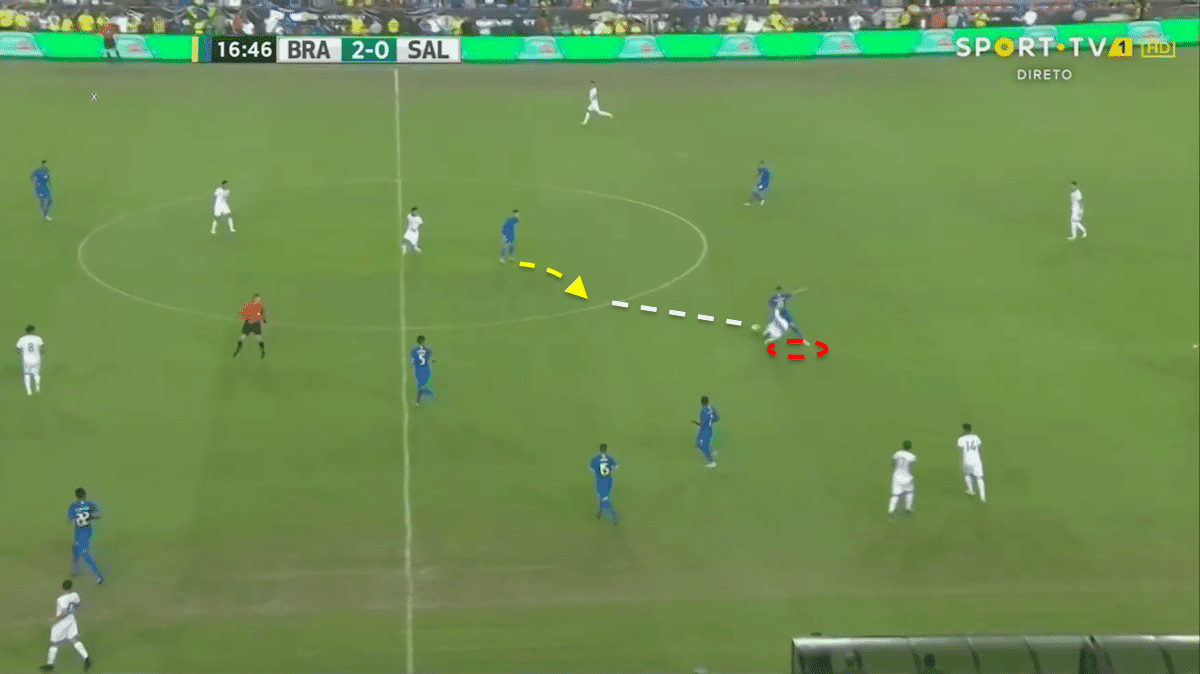 While a foul, the referee allows play to continue and Brazil have space in which to counter thanks to the Everton man's desire to win back possession for his side high up the field.

There is little doubt that putting Richarlison up front against Arsenal would certainly be a gamble. But the Gunners, who play a high line, are particularly vulnerable against pace.

So it's one that could pay off and give Silva a long-term solution to his striking conundrum.