It looks increasingly likely David Moyes will guide West Ham United to Premier League safety but, irrespective of any drama between now and May 13, this will be a campaign firmly filed under forgettable for Hammers fans.

Dismal performances under Slaven Bilic have been followed by the marginally more productive but dreariness of Moyes' pragmatism with the amount of memorable games – nearly all inspired by Marko Arnautovic – countable on one hand.

However, for the toil on the field it's been events in the stands that have provided the overwhelming backdrop. Discord among fans towards the divisive ownership of David Sullivan and David Gold is at an all-time low, exacerbated by the move to the cavernous and distant London Stadium.

Sullivan, Gold and vice chairman Karen Brady's vision, at least publicly, has been to transform West Ham into a bona fide Premier League super club. But casting aside the club's historical foundations so wilfully with the move from Upton Park and rebranding of the club crest has led to a loss of identity.

The Hammers, for all their failures and mediocrity down the years, have always retained a sense of character but 2017/18 has essentially revealed the chasm between owners and supporters and given way to a desperate search for the soul of the club.

Inadvertantly, a 19-year-old has emerged as a man potentially capable of bridging the gap and guiding the Irons between the old and the new; all the time highlighting the traditions and values that have underpinned the club in the past.

It sounds bombastic but Mark Noble as the standard-bearer for what we know as the ‘West Ham Way'.

No club in England has had quite the same relationship or affinity with centre-backs as West Ham. Upton Park has witnessed some of the greatest of all time don claret and blue in Bobby Moore and Rio Ferdinand; Steve Potts, Alvin Martin and Jim Barrett are among their top-ten appearance-makers; cult heroes Tomas Repka and Bilic have also endured affection far longer than more aesthetically-pleasing and exciting foreign imports. 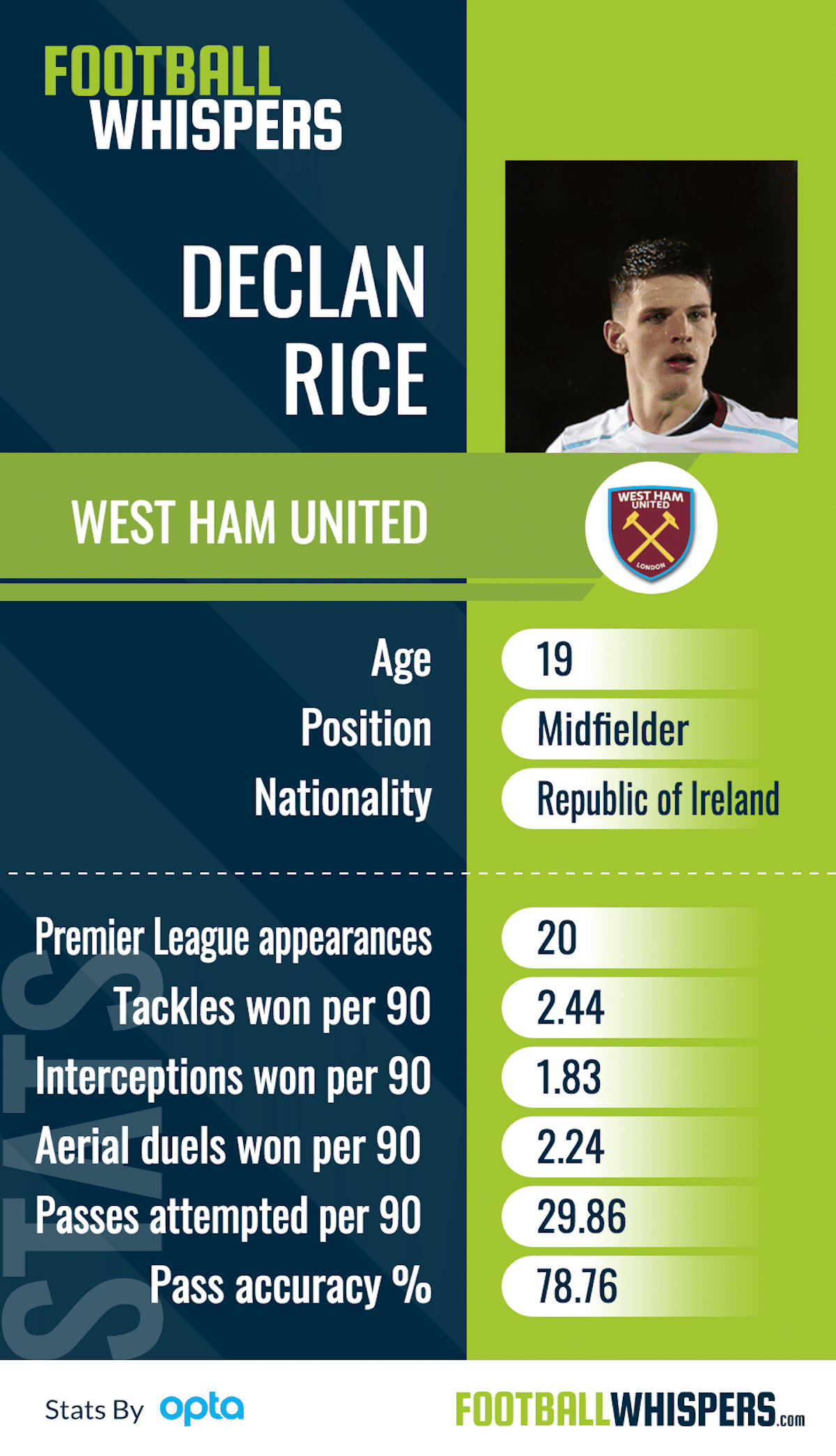 The Republic of Ireland international's elevation from within the academy –albeit via rejection as a 14-year-old at Chelsea – also gives Hammers fans a sense of pride given having “one of their own” has proven a luxury rather than a right in recent years, with only Noble a graduate in regular first-team squads.

West Ham's self-decreed status as ‘The Academy of Football' was being increasingly spoken in the past-tense as Southampton passed them in terms of consistently developing and producing top-flight talent.

Rice now appears to be spearheading a clutch of new youngsters at the club with midfielder Josh Cullen, 22, playing six minutes off the bench in their last two games. Moyes, to his credit, has also included Josh Pask, 20, Grady Diangana, 19, Domingos Quina, 18, and Toni Martinez, 20, in match-day squads.

There is considerable excitement surrounding attacking midfielder Marcus Browne, 20, whose Premier League debut cannot be far off, especially if West Ham stay up with games to spare. Reece Oxford, meanwhile, has made a handful of encouraging performances on loan at Borussia Monchengladbach.

Maybe sooner or later Oxford will be alongside Rice in the Hammers defence but for now it's the Irishman who's garnering all the plaudits, earning comparisons with another player who made the switch across London as a teenager, albeit in the opposite direction.

John Terry's formative football years were spent at West Ham before he made a move to Chelsea aged 14. But while the parallels with Rice in that sense may be just coincidental, there is a certain Terry-ness to the way the Hammers' No41 plays.

He may not be the quickest over 20 metres but his bravery in the tackle and willingness to engage physically with opposition forwards are exactly the sort of attributes that energise a crowd, especially one so fed up with anemic and passionless displays.

It all sounds so very stereotypically English but it is precisely what West Ham need.

Throughout Roman Abramovich's transformation of Chelsea, it was Terry who carried the Shed End-mentality and maintained that sense of character on the field. He was the fan on the pitch and the player who Blues' supporters could most identify with.

But for all the symbolic significance of Rice's ascent, he remains very much a work in progress. And so he should be for a defender of just 19.

Results with Rice starting at centre-back, as has been the case for West Ham all season, have been sporadic with one win, three draws and three defeats. The opposition's xG in those seven matches has been 1.68 compared to the 1.52 in the 25 games when he hasn't anchored the defence over the course of 90 minutes.

It's a marginal differential and, in mitigation, is unfair to present a complete case against him due to the small sample size, spanning five months, with three of those seven matches against top-five sides. Yet it shows significant strides need to be made for him to become a reliable and consistent fixture in the side.

Individually, his tackling success is a solid 77.7 per cent over his 20 Premier league appearances, but perhaps inflated by a number of late substitute appearances when the game's intensity has dropped. It's a little on the low side when he's been a starting centre-back at 52.9 per cent, while aerially he's losing as many headed duels as he's winning with a 50 per cent success rate.

His passing average is at 78.9 per cent, but that doesn't tell the full story as it has essentially been at both ends of the spectrum – 60 per cent against Southampton recently, 100 per cent in the 46 minutes he played at Newcastle in August. Moyes isn't a manager who is always going to encourage his defenders to play from the back but in the modern game it's an area that needs improvement.

All this could be seen as concerning but Rice, at this stage, is more about the unquantifiable. He looks a good reader of the game and positionally – 4-1 defeat at Swansea aside – has looked sharp in playing against strikers of varying skillsets in Harry Kane, Sergio Aguero, Alvaro Morata, Glenn Murray and Christian Benteke. Only the latter duo have struck in games against West Ham where Rice started.

The defender is also something of an anomaly in the English top-flight as Liverpool'sCrystal Palace, are the only other individuals under the age of 21 to have played significant minutes at centre-back in the Premier League this season.

Which gets to the heart of the matter in assessing Rice: he still has an awful long way to go but his mere presence in defence is sign alone that there is serious talent there. That, in itself, is enough to give Hammers hope for the future in this endless winter of discontent.