Tottenham Hotspur are in need of a spark to get their season back on track.

Mauricio Pochettino’s men are in a slump, one that stretches over two seasons, and despite the odd positive performance they can’t seem to sustain that level.

The defeat to Leicester City was the third time in four matches that the beaten 2018/19 Champions League finalists failed to see out a lead.

Arsenal pegged them back in the North London derby to snatch a point after being 2-0 down while Olympiacos did the same as Spurs had to get settle for a draw in their opening Champions League group stage game.

And James Maddison’s late winner at the King Power was deserved with the hosts being the better of the two sides on the day.

Defeat to the Foxes means Spurs have won just twice this season and find themselves part of a group of six teams currently on eight points from six matches. They trail leaders Liverpool by ten points while Manchester City hold a five-point advantage.

For quite some time now, Tottenham have been one of the top-four guarantees. But their place appears to be up for grabs this season unless they rediscover their groove, sooner rather than later.

One such way to do this would be to freshen things up in the final third. Spurs added Tanguy Ndombele and Giovani Lo Celso to their squad this summer but both operate in midfield. Their attack has been made up of the same players for some time and sometimes things can go a little stale.

According to reports in Italy, Tottenham sent a scout to watch 20-year-old winger Riccardo Sottil last weekend. The Fiorentina man, who represents Italy at Under-21 level, is a throwback to the wide players of yesteryear.

Comfortable playing on either flank, Sottil hugs the touchline when on the right and likes to beat a full-back on the outside. He’s got tricks in his locker and is fairly composed when up against an opponent.

The Fiorentina No.11 is an old-school winger who terrorises defenders. Very few have his playing profile in the modern game and because of that full-backs struggle to deal with Sottil. 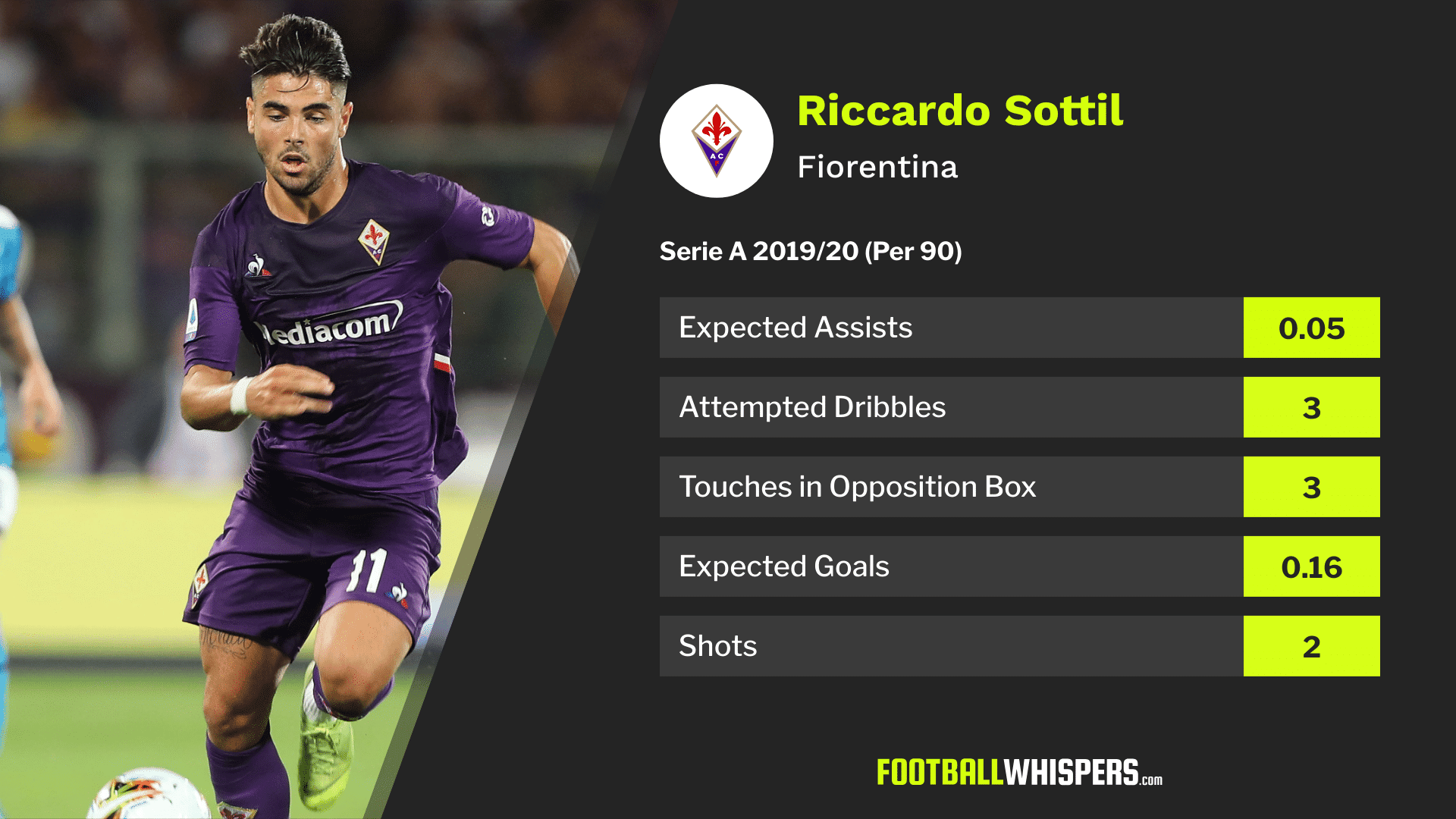 The 20-year-old still lacks regular, reliable output but he creates chaos and carnage. He's unpredictable and this is what makes him effective. He could be the spark to get Spurs firing again.

He's not going to hit 20 goals in a single campaign, at least not anytime soon, and he isn't going to adopt a Kevin De Bruyne role in the Spurs system either if he did join.

But Pochettino's side don't need him to do that. What they need is a player to create space against low-blocks so they no longer have to rely on long-distance shooting.

They need a player who doesn't mind carrying the ball and running away from goal. Far too many wide players are determined to get on the scoresheet and in turn occupy central areas. It's fine in certain situations but at times this clogs up the final third and makes it easier for opponents to defend.

Heung-min Son, Lucas Mousa, Christian Eriksen and Dele Alli all like to drift into central zones of the pitch, no matter where they start from. Harry Kane sometimes drops deep too which then just convolutes that area.

Players aren't stretching the game and when up against a solid defensive outfit it's all a little too easy. This is why Spurs are struggling to score.

They're averaging more passes in the opposition's half as well as more shots but their expected goals average has decreased this season.

Desperation results in low-value efforts being taken but Sottil's introduction would change the dynamic. With the threat of a player going down the line, defending teams would have to react and straight away the middle third isn't as crowded.

The playmakers in the team then have more time and space to do damage, and Kane's supply line is turned back on.

Sottil's signing wouldn't make shockwaves across Europe but it could be a transformative one which then helps Spurs rediscover their swagger as an attacking force.