The middle third of the pitch is often where matches are won and lost. It's why modern day managers are so keen to load up that area of the pitch with players who make a difference. Whether that's with a defensive contribution or an offensive one, players in centre-midfield can't coast.

The likes of Pep Guardiola, Jürgen Klopp and Mauricio Pochettino see the value in having former attacking midfielders playing in a more withdrawn role. They're able to create from deeper areas and are key if you're looking to beat a high press or a low block.

In this feature we wanted to find out who was the Premier League's most creative centre-midfielder.

To do this we've taken a detailed look at what makes a man in the middle third creative. It boils down to creating space for teammates to exploit, taking the opposition out of the game – with and without the ball – and carving out high quality chances on a regular basis.

We've looked at xA90 (expected goals assisted per 90), forward passes and dribbles to rank the top five creative midfielders in the Premier League.

The former stat helps paint a picture of those players who create chances while the latter two are important because not all creative midfielders actually assist shots. Instead they'll be progressive and help the team move forward.

Their roles will vary from team to team and system to system but they're still creative midfielders.

While assists do carry weight, and we used the top five assistors in the Premier League to help formulate this list, they can also be problematic when used in isolation.

An assist can be as simple as playing a two yard pass before a teammate dances past five players and curls home a 30-yard effort. 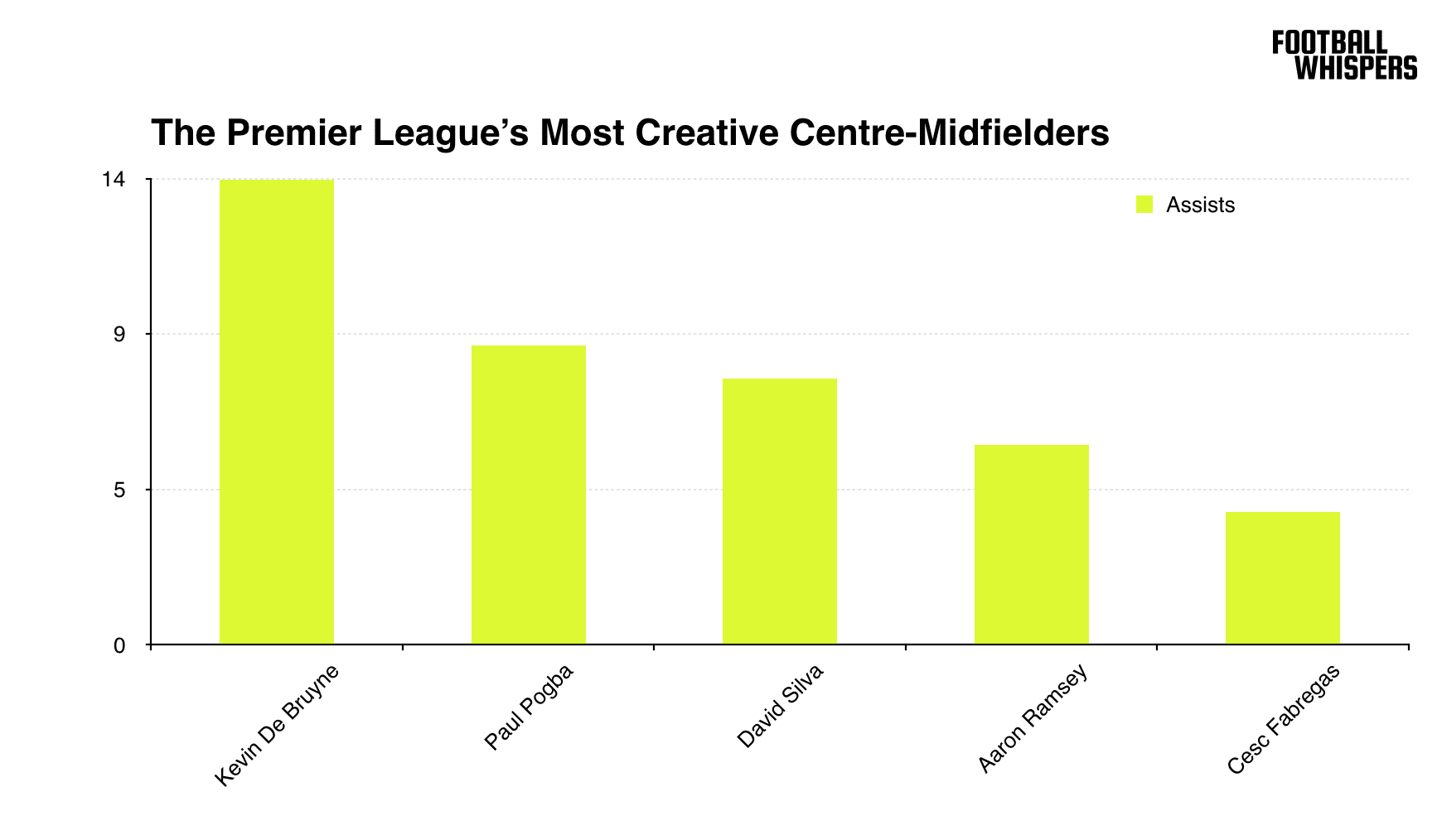 The Manchester United No.6 comes in at number five on our list. The Frenchman is a victim of José Mourinho's stubbornness with the Portuguese continuing to play a 4-2-3-1 system despite it not really suiting the better players he has at his disposal.

It's because of this the Premier League isn't seeing the best of Pogba. He's inhibited by the system he's operating in and a potential force of nature is currently nothing more than a storm in teacup.

His nine assists this term in the English top flight don't tell the whole story. His xA90 has him at just 0.19 – the lowest on the list – meaning he's benefitted from his teammates scoring spectacular goals.

Still, 66 per cent of his passes are going forward and given he's starting in a double pivot and receiving the ball in deep areas of the pitch it means he's getting Man United on the front foot.

He also tops the list of dribbles completed per 90 minutes with three, which goes to show just how progressive he is as a player and how instrumental he is in breaking the opposition's resilience.

If Mourinho wasn't restricting him then Pogba would no doubt be higher up on this list. 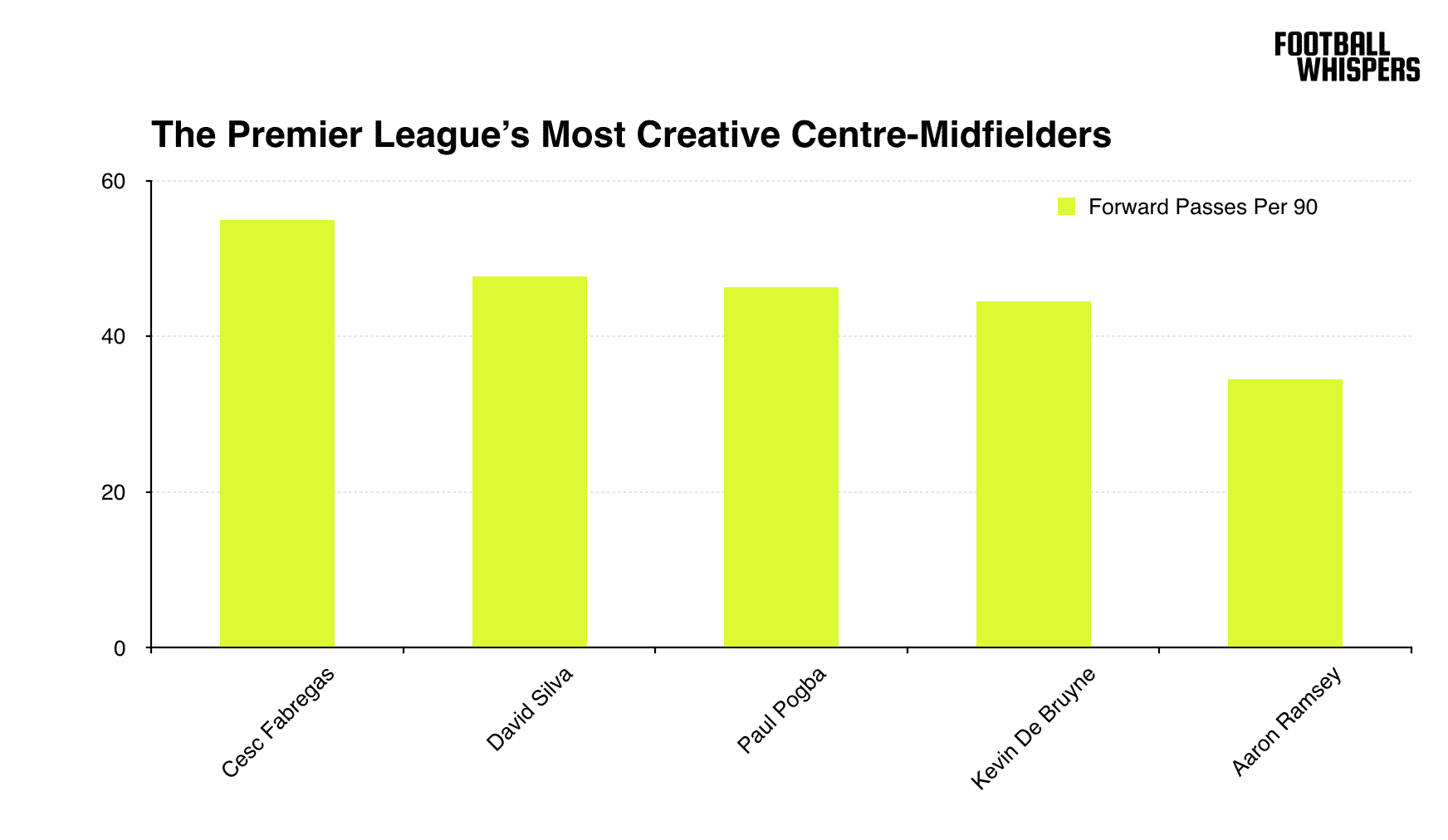 The surprise name on the list, Ramsey is known for his goalscoring prowess but the stats this season suggest he's just as good as a creator.

Playing as a box-to-box midfielder for the Gunners in a 3-4-3 system, what he offers the team goes unnoticed because he's playing behind the likes of Mesut Özil and now Henrikh Mkhitaryan – two of the world's best when it comes to creating chances.

But, when looking at Ramsey as a complete midfielder, he more than holds his own. Over 50 per cent of his passes go forward which shouldn't be overlooked.

Arsenal like to dominate possession and when playing ahead of three centre-backs the temptation is there to play it backwards and recycle the ball. The fact he's not doing that shows he's looking to move Arsène Wenger's men forward.

Ramsey also completes 1.3 dribbles per 90 minutes, showing he can beat players, and has and an xA90 of 0.26, which highlights the fact he's creating high quality chances for his teammates on a regular basis.

The Chelsea No.4 goes under the radar and that is perhaps because of how frightfully easy he makes the game look.

The Spaniard has the ability to execute passes only a select few in Europe can see, and it's why he's often a one-man creative hub for Chelsea. His xA90 for the season is currently 0.31 meaning he creates high quality chances worth one goal every three matches. 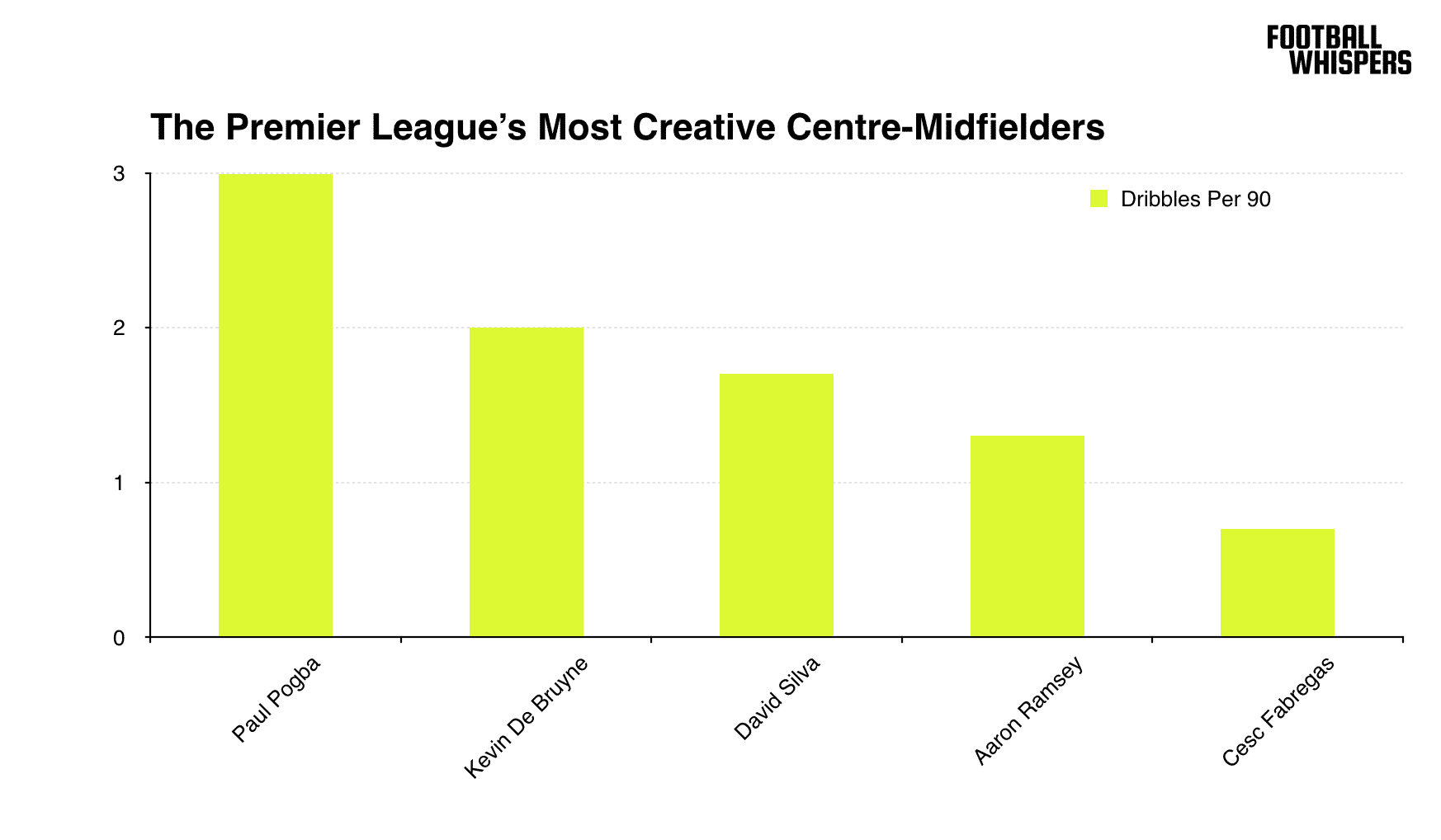 Of the five players on the list, nobody plays more forward passes per 90 minutes than Fabregas but he's second to Pogba when it comes to the percentage of his overall passes played forward.

Like Man United, Chelsea look to get the ball into the final third at great speed. Antonio Conte's men play to the strengths of Eden Hazard and Àlvaro Morata – getting the ball into the pair quickly and playing off of them is how the Blues build their attacks. It explains why 65 per cent of Fabregas' passes go forward.

He lets the ball do the talking and, as you can see when looking at the graph, isn't a player who beats the opposition with a shake of the hips and a dribble.

The 32-year-old playmaker is supposed to be entering the twilight of his career but there's an argument to be made that he's actually playing his best football and looks rejuvenated under Guardiola this season.

Silva is thriving in a more box-to-box role and is enjoying the freedom that goes with it. He's pulling the strings along with de Bruyne and it's no wonder Bernardo Silva has only had a bit-part role since his move to the Etihad in the summer.

The City system relies on the team keeping the ball and forward passes aren't always a necessity. The fact 52 per cent of his passes are played forward shouldn't be a concern in a Guardiola set-up. It's sometimes all about patience and Silva has just that.

He also completes 1.7 dribbles per 90 minutes and that no doubt helps his side unlock teams who look to sit deep and sacrifice possession.

His xA90 for the season is 0.34, he keeps possession, beats the opposition and he creates high quality chances on a frequent basis. What more could Guardiola want from a midfielder? 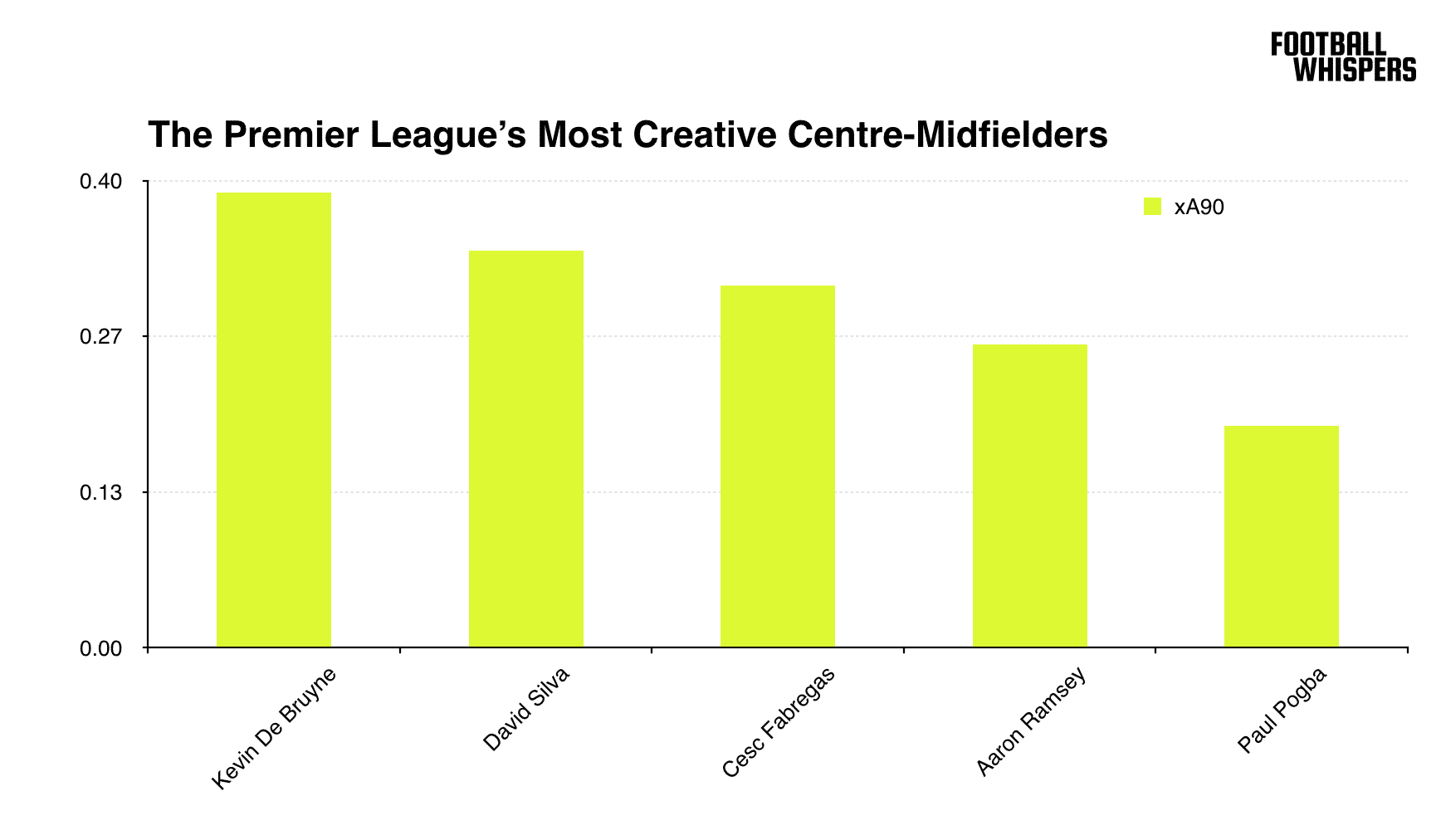 The Belgian midfielder is one of the best players in the world right now and, depending on his World Cup performance, might push Cristiano Ronaldo and Lionel Messi for the 2018 Ballon d'Or.

De Bruyne has kicked on under Guardiola and has become a creative force. He's benefitting from playing in an environment suited to his strengths, thriving in the freedom afforded in midfield and has become the main man in a side which dominants possession – City have 66 per cent of the ball on average in the Premier League.

However, as the likes of Tottenham Hotspur and Liverpool have found out, dominating the ball doesn't always result in creating high quality chances. For that you need players with creativity in the middle third. That's the real difference between City and the chasing pack.

Guardiola has genuine game changing talent in the midfield – De Bruyne's xA90 is 0.39 this season. City are averaging 2.9 goals per game in the league this season and the 26-year-old's ability on the ball is certainly playing a part in this.

You can't help but feel as though Pogba would be pushing de Bruyne for the crown if the Red Devils weren't managed by Mourinho. But for now there's a clear winner.

The Belgian is the most creative centre-midfielder in the Premier League.