Slick passing moves and mazy dribbles are all well and good, but there's nothing quite like a good, old-fashioned wallop into the top corner from distance.

While European leagues prize the beauty of collective, cohesive interplay, and South America stars light up the game with their individual flair, there's no more sure-fire way to get English football fans out of their seats than to unleash a 30-yard rocket beyond the futile grasp of a well-beaten goalkeeper.

Some may contest that reserving the highest praise for such strikes is reductive, and that the ability to string together 40 passes before walking the ball into the net is a greater indicator of mastery of the game, and they may not be wrong.

But the beauty of a long-range goal should not be downplayed. Sure, it's often the low-percentage option when attacking the opposition's goal, but when it works, when flawless technique marries power and precision, there are few more breathtaking sights in football.

And, at present, the Premier League is home to some of the world's foremost long-shot exponents, with Goal of the Month contests regularly featuring a handful of masterfully blasted strikes from outside the penalty area.

We've taken a look at the statistics to identify the Premier League's most clinical marksmen from outside the 18-yard box.

Manchester City, under the tutelage of Pep Guardiola, have introduced a new level of possession football and positional play to the English top flight this season, cruising to a commanding lead in the title race largely though dominance and astute manoeuvring of the ball.

But City also boast some of the division's best distance-shooters. Star striker Sergio Agüero, who is more one for a considered curler into the corner than a fearsome power effort, is a threat from 20-plus yards, while no player in the league has more goals from outside the penalty area this season than Kevin De Bruyne, with four. So even the Premier League pass masters are not averse to trying their luck from range every now and then.

Stoke City's Xherdan Shaqiri has managed to match De Bruyne's long-range return, with his rocket of a left foot proving a key weapon for the Potters once against this term.

The only other player with four Premier League outside-the-box goals to his name this season no longer even plays in the English top flight.

During his five-year Liverpool career, Philippe Coutinho lit up Anfield with some wondrous long-range goals, regularly finding the top corner with his cultured right foot.

And despite having joined La Liga leaders Barcelona for £140million in January, and only featuring in seven of the first 14 league games this season, the Brazilian playmaker still sits joint-top of the scoring charts when it comes to efforts from more than 18 yards.

Although De Bruyne's return from distance so far this season cannot be beaten, the Manchester City star has also taken the most shots from outside the penalty area in the Premier League (59), meaning he takes more of a volume approach to scoring from range.

It's a similar story with the division's current top scorer, Harry Kane. The Tottenham Hotspur striker is second only to De Bruyne for attempts from more than 18 yards, and while he has scored three goals from outside the box this term, his conversion rate at this range is just 5.45 percent, meaning he requires 18.35 long-range shots for every one goal scored. 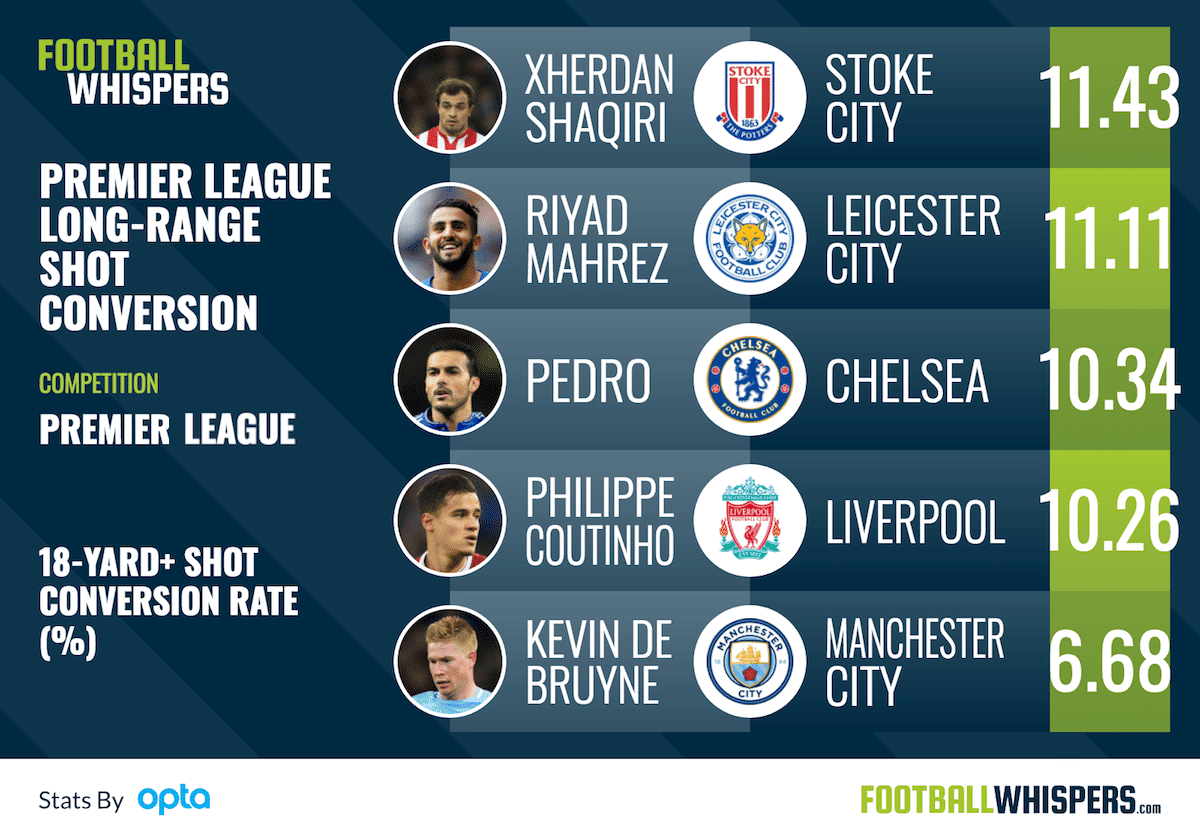 To judge who the most prolific distances-shooters are, we analysed the conversion rate of every Premier League player to have taken 25 or more shots from outside the penalty area this season.

When it comes to efficiency, Shaqiri is leading the way, with 11.43 per cent of his shots from outside the box finding the net – that's one goal for every 8.75 attempts.

Leicester City‘s Riyad Mahrez, the 2015/16 PFA Players' Player of the Year, has been demonstrating his class from distance this term as well. The Algerian winger, who also figured highly in our analysis of the Premier League's top finishers, has scored three goals from outside the box from just 27 shots, giving him an impressive conversion rate of 11.11 per cent.

The most wasteful long-distance shot-taker this season has been Newcastle United‘s Matt Ritchie, who has taken aim from outside the 18-yard box 34 times but scored none.

Team-mate Jonjo Shelvey is second on this inauspicious list, having taken 27 long-range shots without scoring. With the Magpies averaging less than goal a game this term, Rafa Benítez needs the pair to either find their shooting boots or seek alternative routes to goal.