Advancement in modern football tactics, combined with an ever-growing desire from fans and clubs' paymasters for the the game to be played the ‘right' way, has led to crossing becoming a tactic somewhat sneered at.

With Juego de Posición and gegenpressing the methods de rigueur, effective wing-play and consistent deliveries from wide as a primary method of attack is considered a lowest-common-denominator approach.

But fast wingers, crosses into the box and powerful centre-forwards have long been tenets closely associated with the English game. And, while the Premier League is unquestionably better for its oversees tactical influences, forcing a football culture once set in its ways to embrace progressiveness, the old-fashioned way can still get results.

Crossing doesn't have to be about aimlessly punting the ball into the box in the hope a 6ft-plus centre-forward will employ dubious elbow techniques to out-jump his marker and head powerfully for goal; it can, like any tactic or technique, be artful – think Kevin De Bruyne‘s masterful low, driven centres across the six-yard box, or César Azpilicueta's wonderful arched deliveries from deep, narrow positions.

Here we look to celebrate the finest purveyors of this art in danger of becoming lost by delving into the statistics to pick out the Premier League's best and most efficient crossers.

Analysing the statistics of each player to have made a minimum of 20 accurate crosses in the Premier League this season, we have taken into account accuracy, output and the quality of chances created in order to discern the English top flight's best crossers.

From the collection of 29 players who qualified, perhaps somewhat surprisingly given his central positioning, Manchester City's De Bruyne has attempted the second-most crosses (143), with only Leicester City‘s Marc Albrighton (152) swinging more balls in from wide.

De Bruyne also figures highly when it comes to total accurate crosses completed his term, with his return of 48 second only to Brighton & Hove Albion‘s Pascal Groß (56).

But while De Bruyne's 33.57 per cent cross accuracy is a strong average, meaning one in three of his centres picks out a City colleague, the Belgian's volume approach means he does not rank among the Premier League's most accurate crossers. 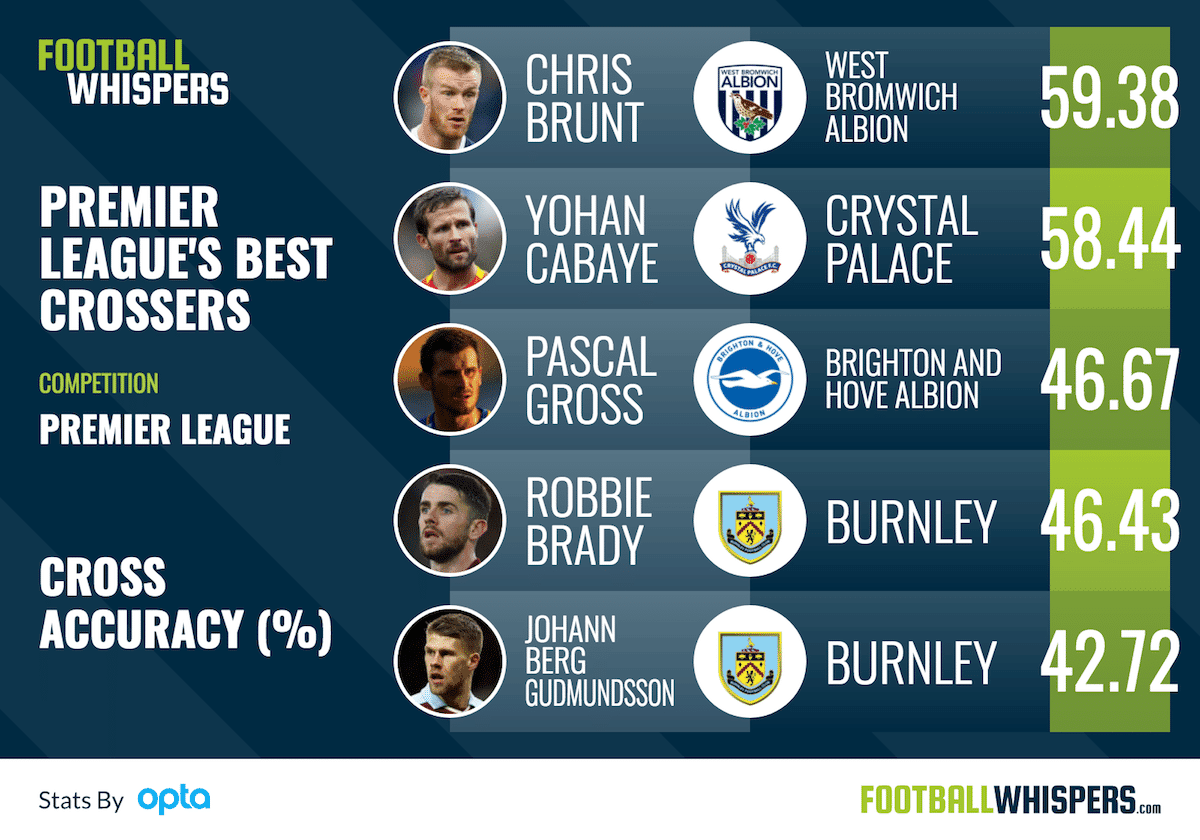 As the above graphic shows, West Bromwich Albion wide man Chris Brunt has been the most efficient crosser this term. Renowned for his powerful and accurate left foot, the Northern Ireland international, incredibly, picks out a team-mate with more than half of his attempted crosses (59.38 per cent).

Second, another surprising high-ranker given his central starting position, is Crystal Palace playmaker Yohan Cabaye, who is behind only Brunt in terms of accuracy, connecting with an Eagles colleague on 58.44 per cent of his attempted centres.

With powerful strikers Christian Benteke and Alexander Sørloth leading the line, getting crosses into the box is a big part of Palace's attacking philosophy.

As such, Andros Townsend is among the division's most regular crossers, attempting 103 in total. And although the Englishman is less accurate with his centres than Cabaye, the fact his expected assists per 90 (xA90) average is higher than that of the former Newcastle United midfielder (0.22 to 0.15) suggests he is creating a higher quality of chance with his deliveries. 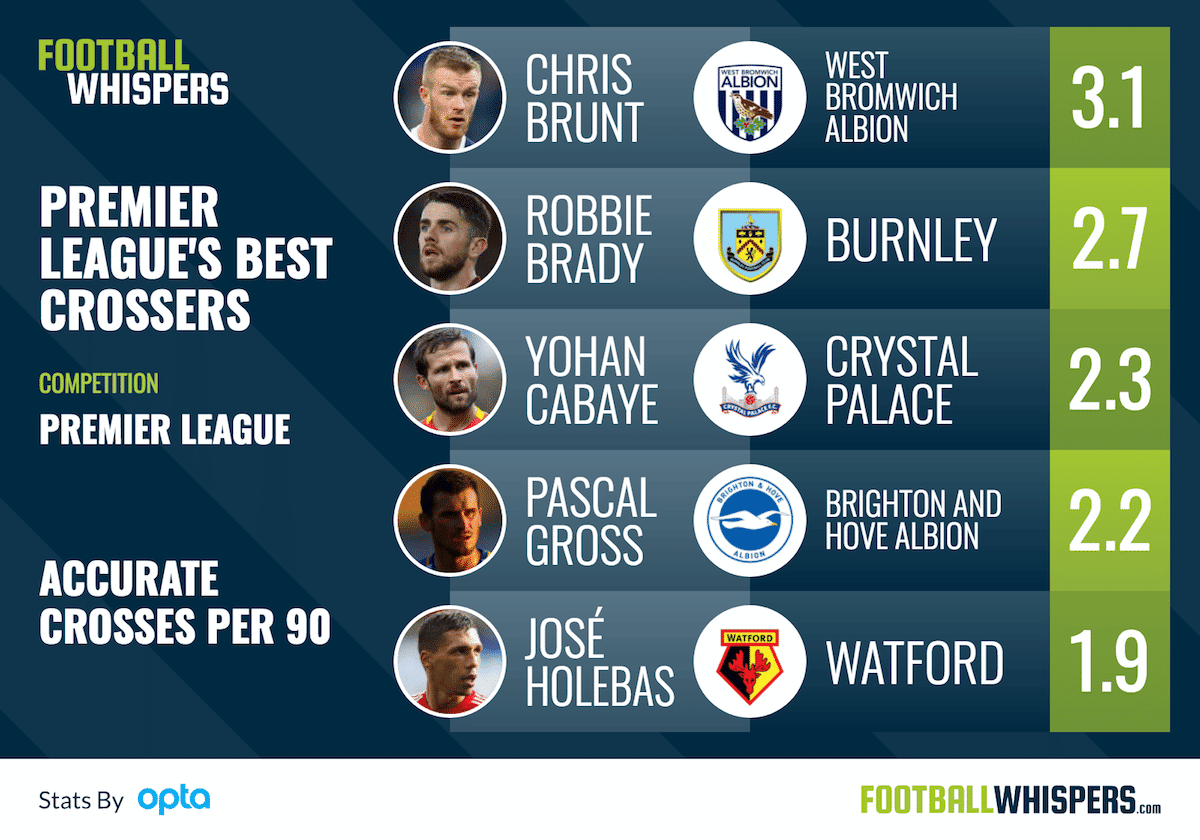 Not only is Brunt the Premier League's most accurate crosser at present, he is also its most prolific, producing a whopping 3.1 accurate crosses per 90 minutes this season.

Burnley's Robbie Brady, who also figured highly in terms of accuracy, is second with 2.7 accurate crosses per 90, while Cabaye crops up again in third.

Of course, it should be noted that crossing is often more about playing the ball into a particular area than specifically picking out a team-mate; an accurate cross is almost as dependent on a striker making the right run and attacking the ball appropriately as it is on the delivering player hitting the mark.

Therefore, wingers who play alongside aerially dominant strikers stand more of a chance of figuring highly here, so Brunt's performance is also, in some way, an endorsement of West Brom's forwards' ability to connect with his crosses.

There is no doubt, however, that Brunt and the other high-scoring crossers are producing consistently excellent deliveries.

One further feather in Brunt's cap, and perhaps the most instructive statistic of all quoted here, is that he has an xA90 of 0.36 this season. The expected assists metric applies a probability score to each chance-creating pass, using historical data to calculate how likely the subsequent shooting player is to score from the opportunity conjured.

Brunt's xA90 is second only to De Bruyne's (0.4) of the players assessed here.

Considering the Belgian playmaker is as much of a creative influence centrally, via through-balls and clever combination play, as he is out wide, while the Baggies man is a pure wide player, it suggests the Northern Irishman's crosses are not only frequent and accurate, but lead to high-quality chances, too.