The role of the centre-forward is changing. As the modern game evolves, so too do the requirements of each position, varying, of course, depending on system.

One trend common, irrespective of tactical set-up though, is that players who specialise in one specific aspect of the game are being phased out, and a more holistic approach demanded.

It is no longer enough for a centre-back to dominate aerially and physically, they must now also be able to initiate passing moves from the back; full-backs are as big a weapon in the attacking third as they are defensively; and strikers can't content themselves with simply scoring goals anymore – they are now the first line of defence, pressing high or dropping deep as necessary.

As such, it is now perfectly reasonable for forward players to figure highly when ranking performance statistics ordinarily associated with defenders.

As pressing and counter-pressing becomes more and more prevalent at the top end of the game, strikers are tasked with putting pressure on opposing defenders when they have the ball, seeking to recover possession as soon, and as high up the pitch, as possible.

If they are effective in doing so – tackling or intercepting – a defender's out-of-possession tasks centre more around sound positioning, maintaining shape and spacing, rather than getting their shorts dirty. 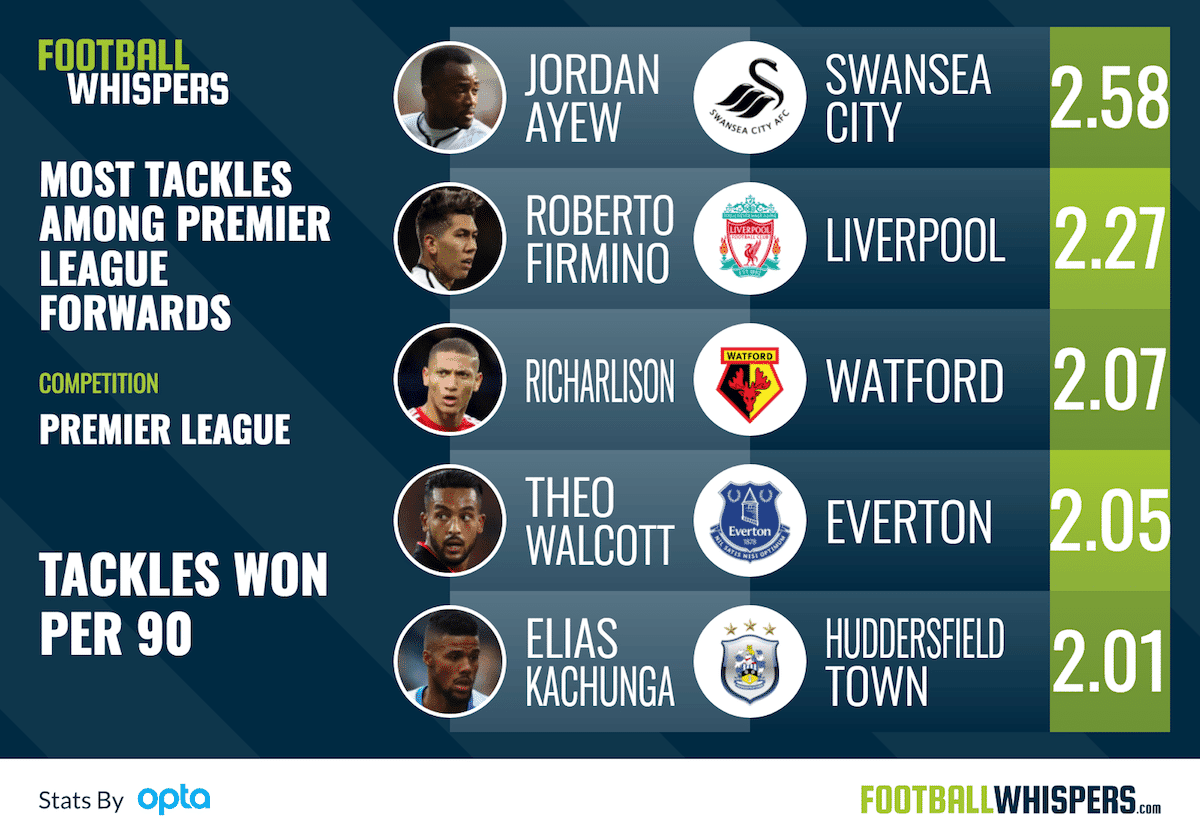 Liverpool‘s Roberto Firmino, only converted from an attacking midfielder into a striker in the last 18 months or so, is widely regarded as one of the very best out-of-possession forward players in Europe.

In Jürgen Klopp's pressing system, the Brazilian is usually the man to initiate his side's efforts to recover the ball, diligently closing down and harrying the opposition into making mistakes, or funnelling them into a corridor where the swarming Reds can overwhelm them and snatch back possession.

Unsurprisingly, then, Firmino figures highly when looking at Premier League forwards who make the most tackles per 90 minutes. He isn't top of the pile, though, as the above graphic shows.

That distinction goes to Swansea City‘s Jordan Ayew, who, in addition to being the struggling South Wales side's highest scorer with seven league goals, has an unquestionable workrate which sees him make 2.58 tackles per 90.

Watford's Richarlison, a rumoured Manchester United transfer target before a huge drop off in form, has earned plaudits for his commitment and discipline since his summer move from Fluminense, and he figures in the top five. And David Wagner's pressing style means Huddersfield Town striker Elias Kachunga is also in the reckoning.

Theo Walcott, now of Everton after a January switch from Arsenal, is a more surprising top-five entry, however. He may not be the most consistent scorer but the Englishman's work ethic cannot be questioned.