There is an old, fairly well-worn, cliche in football regarding goalscoring: it is, according to all those who have played the game, the hardest thing to do. And that's why those who have the knack of finding the net are the most revered players in world football.

Cristiano Ronaldo is arguably the best example of this. The Portuguese superstar is considered one of the game's greatest, his ruthless pursuit of goals a shining example for all young attackers.

Ronaldo has struck at least 40 times a season for over a decade and it's resulted in trophy after trophy, accolade after accolade. Yet is he, in pure raw talent terms, as good as his great rival, Lionel Messi? Probably not.

It's the goals – and results they bring – that has made Ronaldo a legend of the game. However, there is a compelling argument that he isn't an effective finisher.

Which brings us to expected goals (xG), a metric which measures the quality of a goalscoring chance based on the probability of the shot finding the back of the net.

It helps fans, pundits, players and coaches alike gain a better understanding of a player's finishing capability. If they constantly outperform their xG, it's fair to assume the player is a clinical finisher. Underperform and the opposite may be the case – although it could simply be a sign they've hit a rough patch of luck.

That leads us to this season, and a question. Who are the players in Europe who have been the most efficient in front of goal this season?

We'll we've tried to measure this as fairly as possible, which is why we're only focused on open-play goals and open-play xG rather than their total goals and total xG for their respective league seasons.

Why? Well, total xG includes penalties and one or two misses from the spot can great impact a player's expected output in front of goal. 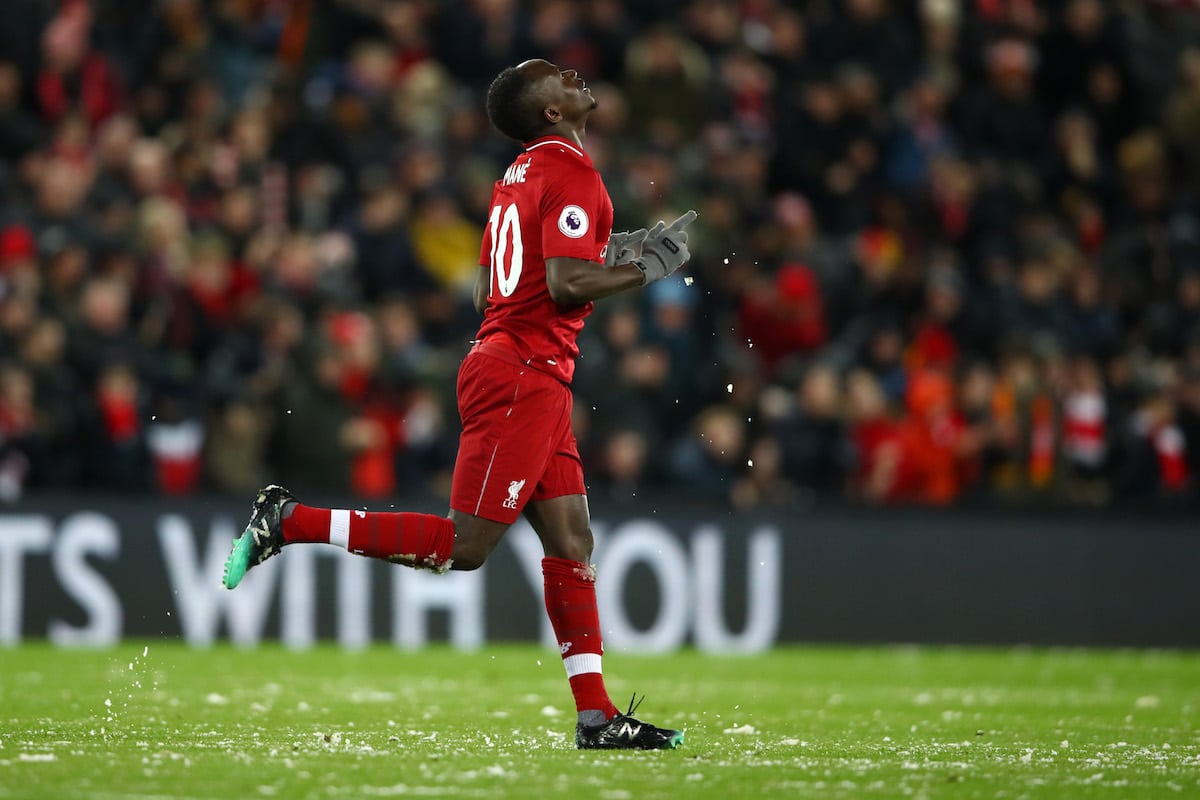 Much has been written about Liverpool's fabled front three of Roberto Firmino, Mo Salah and Mané in recent weeks.

The common theme is they are not as effective as last season, when they would blow teams away through a combination of quick counter attacks and ruthless finishing.

This term, Firmino and Salah have performed far more in line with their expected goals. Mané though, despite being viewed as the ‘weakest' of the trio, has managed to overperform significantly.

In the Premier League, he has an open play xG of 9.84, a respectable output. However, he has actually netted on 14 occasions, proof he has become a fine and effective finisher during his time at Anfield.

When it comes to the most entertaining side in Serie A this season, you'd be hard pressed to beat Atalanta. Gli Orobici press high up the pitch and attack via quick transitions.

If it clicks, goals are almost guaranteed. And it's perhaps why the club have two players in this list's top ten, the first of which is Iličić.

The 31-year-old has impressed once again this season and has netted eleven times from open play in the Italian top flight. His open play xG is, though, a more modest 6.71. It's a strong overperformance.

At 36 years old, Quagliarella is enjoying the best season of his career; as we have written in more detail about here.

The striker has shone for Sampdoria and has struck 19 goals to rival Ronaldo in the race to become Capocannoniere – the top scorer in Italy.

Of Quagliarella's 19 Serie A goals, 15 have come from open play. And that is a significant improvement on his open play xG of 10.67.

Those who have watched Quagliarella over the years won't be surprised, though. He has always been a player capable of scoring from the most unlikely of situations, as he proved against Napoli earlier this season.

From the start of December to the end of January, there was no striker across Europe in better form than the 27-year-old Sampdoria star – he struck 14 goals in just eight Serie A games.

While that hot streak has cooled somewhat in recent weeks, Zapata remains an effective finisher when presented with chances by his Atalanta teammates.

The Colombian has an open play xG for the season of 10.18 but has outperformed that to net 15 times in open play for his side, who are chasing the final Champions League spot in Italy's top flight.

Rewind to the summer of 2016 and the South Korean star was considering his future at Tottenham Hotspur after a tricky debut season in England.

“I went to the gaffer’s office and told him I didn’t feel comfortable and wanted to leave for Germany,” he told the Evening Standard earlier this month. “The gaffer trusted me, though, and I am so grateful.”

Things definitely worked out for Son at Tottenham, and this season he has become a vital component in Mauricio Pochettino's frontline. With Harry Kane ruled out, he stepped up to wins games. If he was given one chance, he'd take it.

That is reflected by the numbers. Son has netted eleven Premier League goals from open play this term, a significant improvement on his open play xG of 6.18.

There is a reason he has been nicknamed ‘Sonaldo‘ but some…

The French winger didn't enjoy a stellar first season with Barcelona. Injuries and a lack of form led to many questioning why the club agreed a deal worth £135.5million to sign him from Borussia Dortmund.

This term, though, Barça have started to see the real Dembélé – the Dembélé who skips past defenders with ease, opens up space for teammates, creates chances, and scores the odd sumptuous goal from distance.

And it's this penchant for the spectacular which has helped the 21-year-old strike eight times in open play this season despite having an open play xG of just 3.17.

The striker's loan move to Borussia Dortmund from Barcelona last summer didn't raise too many eyebrows. The Spaniard had struggled during his two seasons at the Camp Nou and needed to escape to kickstart his career.

He has done that in Germany, rather spectacularly. For much of the first half of the campaign, Alcácer was the hottest striker in Europe. He scored nine goals in his first eight appearances for BVB, many of which came as a second-half substitute. He was the ultimate super-sub.

His incredible form – he was averaging a goal every 29 minutes at one stage – was unsustainable but the 25-year-old continues to outperform his expected metrics.

In the Bundesliga, Alcácer has netted 12 times from open play, his open play xG is, though, just 7.11.

What is there left to say about the little Argentine genius? 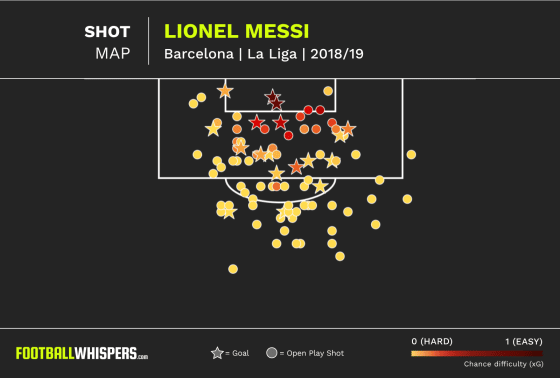 And that is evidenced by his form in La Liga this season. The Barcelona star is yet again the driving force behind their push for the title. He is the club's top scorer and the division's.

Messi has struck 19 goals from open play in La Liga this term, however, his open play xG for the campaign stands at 12.98. While other players' outperforming that figure to such an extent would be a surprise, it is par for the course for Barça's No.10.

When it comes to identifying talent, honing said talent's skill and then selling them on at a vast profit, few clubs do it as well as Benfica. However, Jović is a painful reminder they don't always get it right.

The striker spent just a sole season with the Portuguese club before they deemed his surplus to requirement. He joined Eintracht Frankfurt on a two-year loan deal and has since blossomed into one of the finest young strikers in Europe.

Eintracht have a €6million option to sign Jović permanently this summer. One they will take up. Then they're likely to move him on at a significant mark up; Real Madrid, Barcelona, Manchester City, Chelsea and more are interested in the 21-year-old.

Jović has proven himself an expert finisher, which is why he has netted 15 open play goals in the Bundesliga this season despite his open play chances having an xG of just 7.87.

For years arguments raged on as to who, when Messi and Cristiano Ronaldo retired, would pick up the mantle as the world's best player. Then a 17-year-old Mbappé emerged at Monaco and ended the debate.

His rise over the last three seasons has been extraordinary. He's won Ligue 1 twice, become the second most expensive footballer of all time, and lifted the World Cup with France.

He is a superstar and will in the coming years become a marketing juggernaut. But all that is underpinned by one thing: he is a supremely gifted player.

And that is evident in his goalscoring this season. Mbappé, who shares the limelight in Paris with Neymar and Edinson Cavani, has struck 23 times from open play in Ligue 1 this season.

It's an excellent return yet made more the more impressive given his open play xG for the campaign is only 14.91. That means Mabppé, who remember is still only 20 years old, has scored more than eight goals than expected given the quality of his chances.

He is, without doubt, a sensation.