Football is constantly evolving. Yet no matter the tactical trends, the formation fads that can alter leagues and seasons, one thing will never change: the importance of scoring goals.

It's why the most expensive players, and those who receive the biggest pay packets, are often the attackers who put the ball in the back of the net on a consistent basis.

Yet these players are not infallible. They have their hot streaks, spells of form when everything they hit flies in, and their cold streaks, periods when the ball doesn't drop to them in the right area or goalkeepers pull off the spectacular time and time again.

And that brings us to expected goals (xG), a metric which measures the quality of a goalscoring chance based on the probability of the shot finding the back of the net.

It helps fans, pundits, players and coaches alike gain a better understanding of a player's finishing capability. If they constantly outperform their xG, it's fair to assume the player is an effective finisher. Underperform and the opposite may be the case – although it could simply be a sign they've hit a rough patch of luck.

Which leads us to this season, and a question. Who are the players in Europe who have been the most clinical and the most wasteful in front of goal this season?

We'll we've tried to measure this as fairly as possible, which is why we're only focused on open-play goals and open-play xG rather than their total goals and total xG for their respective league seasons.

Why? Well, total xG includes penalties and one or two misses from the spot can great impact a player's expected output in front of goal.

It's also worth remembering that none of the attackers on this list are bad players, in fact, some are having fine seasons with their respective clubs. It's just that they have missed a significant amount of opportunities in front of goal.

Valencia have had something of a strange campaign in La Liga. Of their 26 games to date, Los Che have only been beaten on four occasions, have won just seven games and have drawn an incredible 15 matches.

This inability to eke out victories, to turn one point into three, has partly been down to the inconsistent form of Rodrigo. The 28-year-old enjoyed a stellar 2017/18 campaign in which he scored 19 goals for Valencia and was included in the Spain squad for the World Cup. He was also linked with Real Madrid last summer.

This term, however, he has been far less effective in front of goal. Rodrigo has struck five times in La Liga – three of which have come in his last six games – but has had open-play chances worth 8.71 xG.

Had he been more clinical, then perhaps Valencia would be leading the chase for the fourth Champions League spot in the Spanish top flight. Instead, they are six points behind surprise package Getafe, who sit fourth with 12 games to play. 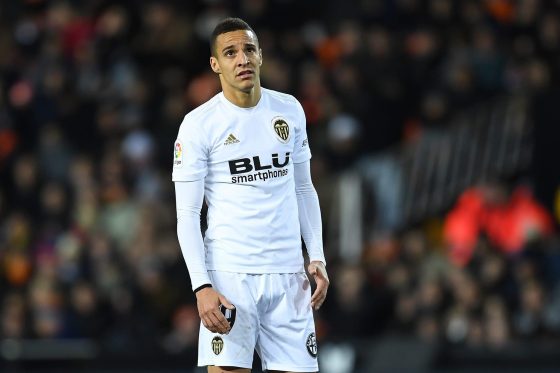 Fulham are, barring a miracle, going to be relegated from the Premier League this season. The west London side are 19th in the table and have conceded 65 goals in just 29 matches.

Clearly, that is the reason they're going down and, in truth, were it not for the goals of Mitrović, Fulham would likely be bottom of the table. Yet, as we mentioned above, goalscoring isn't necessarily a sign of a clinical attacker. And that is the case with the Serbian.

He has netted ten times in the league this term – half of all the goals Fulham have scored in the top flight – and yet, in open play, the 24-year-old has been presented with chances worth 13.82 xG.

Mitrović has left almost four goals on the shelf this season. But would scoring these opportunities have made much of a difference to Fulham's season? It's unlikely.

When Roma signed the forward from Sampdoria in the summer of 2017, it was viewed as another inspired piece of business by the club. The Czech striker had struck 11 goals in his debut Serie A campaign and had, by some, been likened to the great Dennis Bergkamp.

Unfortunately, for Schick, his move to Roma hasn't worked out. He scored just twice in the Italian top flight last season and has the same total to his name this term.

Yes, Roma haven't fashioned opportunity after opportunity for the 23-year-old, but he has had chances worth 5.85 xG in Serie A. He should be doing better.

However, as we'll touch upon shortly, Schick hasn't been the most wasteful player in the Roma attack this term.

Huddersfield Town have, since their promotion to the Premier League in 2017, struggled to score goals. Yet that doesn't mean they don't fashion chances.

Take Steve Mounié, for example. The striker's first game in English football couldn't have gone much better; he struck twice on debut to help the Terriers to a 3-0 win at Crystal Palace.

But then the goals started to dry up. He managed only five more in the league last season and this term, the Benin international has netted on only two occasions in despite having an open-play xG of 5.91.

So had Mounié been more clinical, would Huddersfield be keeping their head above water instead of being bottom of the table? Almost certainly not. But Huddersfield may have nudged themselves above Fulham.

The 30-year-old is one of European football's elite strikers. Lewandowski has scored goal after goal, season after season in the Bundesliga. However, that doesn't mean he is incapable of missing chances.

Regular watchers of the German top flight will have noticed that this term, the Bayern Munich star has been wasteful in front of goal in several games. And it's why he's only level with Luka Jović in the race to be crowned the Bundesliga's leading marksman.

In open play this season, Lewandowski has netted 12 times for Bayern. But he has had far more opportunities, fashioned by either himself or his talented team-mates.

The Pole's open-play xG for the campaign is 16.10, meaning he could have another four goals to his name. This shouldn't, though, be viewed as Lewandowski succumbing to the ravages of time, it may be pure bad luck which could change at any moment.

The future of Roma boss Eusebio Di Francesco has been subject to plenty of speculation this season. Perhaps a victim of his own success last term – he guided the club to the Champions League semi-finals – I Giallorossi's form in Serie A has been a consistent issue.

As things stand, the club sit fifth, only three points off Inter who occupy the final Champions League place. Doesn't sound too bad, does it? 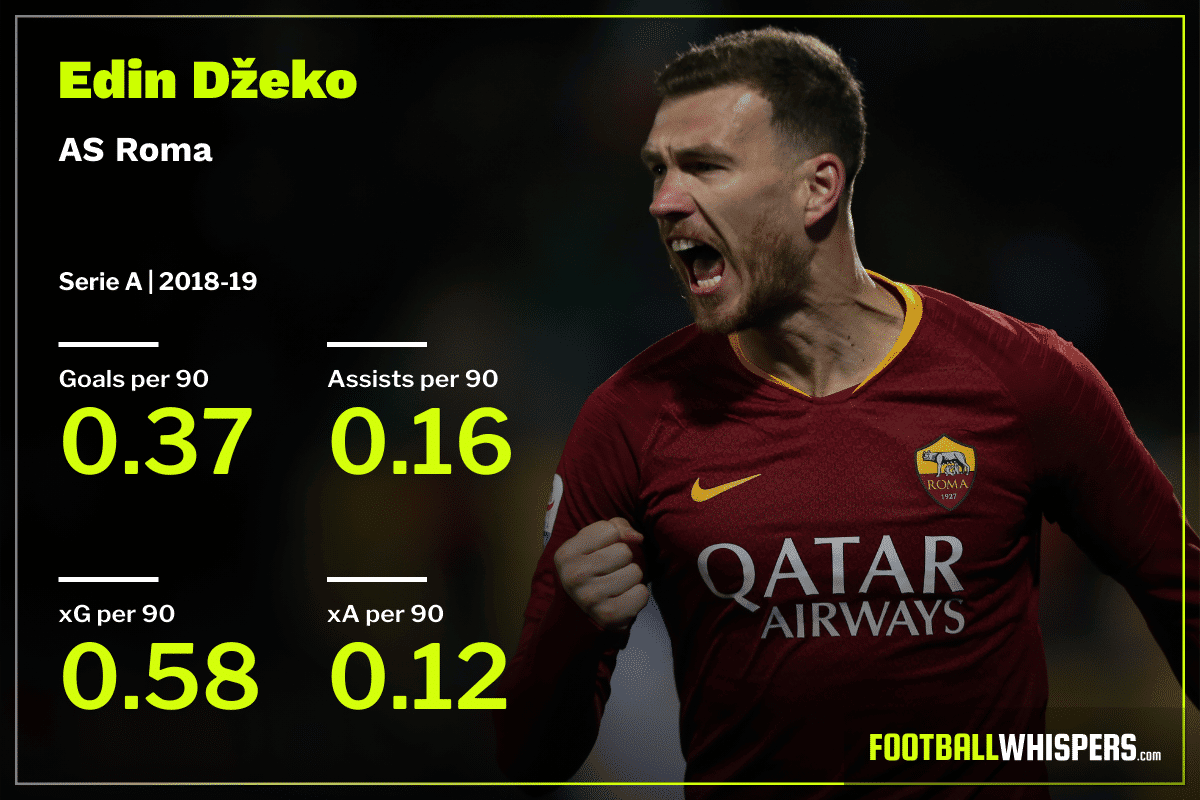 But Di Francesco must wonder what might have been had he possessed a striker who could take the opportunities that fall there way. We've already mentioned Schick but Roma's chief chance waster is Džeko.

In Serie A this season, the Bosnian, who is undoubtedly a confidence player, has struck seven open-play goals despite having an open-play xG of 11.18.

The Mexican has been an instant success in the Premier League with Wolverhampton Wanderers. He has struck nine goals in open play and has helped the newly promoted side to seventh in the table.

His impact on the team has been invaluable… but it could have been even better had Jiménez been more clinical with the chances that have fallen his way this term.

The 27-year-old has an open-play xG of 13.38 and why it would be churlish to criticise him, Wolves may have had a Europa League spot sewn up had Jiménez been a little more ruthless.

Rewind to the 2016/17 Serie A season. It was a campaign that belonged to Il Gallo (The Rooster).

Belotti, whose hand gesture when celebrating a goal mimics that of the bird, struck 26 goals in 35 league games for Torino and was expected to join a European powerhouse.

A big move never materialised, though, and season the Italy international, partly due to injury, struggled. And this term has again been, in pure goalscoring terms, disappointing.

The 25-year-old has netted four open-play goals in Serie A yet has an open-play xG of 8.74. That form, coupled with his output last season, suggests Belotti may have been a one season wonder. Time will tell.

Much was expected of the 26-year-old striker but the move hasn't worked out for either club or player. The Yellow Submarine have endured an awful season and after 26 games are in the relegation zone, just one point off the foot of the table.

Moreno's goalscoring touch, meanwhile, has deserted him. He has netted on only four occasions from open play – and hasn't scored at all in the league since December – but boasts open-play xG of 9.07.

Who knows how important those lost goals could be for Villarreal come May.

Let's get one thing clear, Chiesa is a very, very good young player. One who will undoubtedly play at one of Europe's top clubs in the near future. He combines pace with tricky and is an undoubted threat in the final third.

It's just this season, he hasn't been clinical with the chances that have come his way. The Italian international has five open-play goals to his name in Serie A this term, however, his open-play xG stands at 10.11.

It means Chiesa is five goals shy of the tally he is expected to have hit this term. It's an area of his game that will need to honed.