Lionel Messi, Luis Suárez, Cristiano Ronaldo and Robert Lewandowski all netted braces at the weekend while Harry Kane bagged his 11th goal in his last six starts. All are attackers playing in one of the top five leagues in Europe and considered by many to be clinical.

You often hear phrases such as “ruthless in front of goal” and “ice cold when in the penalty area” to describe forwards. But are they as clinical as people make out? The Google definition of clinical is ‘very efficient'.

Are they very efficient or are are they simply efficient?

That's not to suggest the latter is a bad thing, but it appears as though many confuse clinical with reliable. The top attackers in world football are reliable; they often find themselves in the right places to get high quality chances meaning you can count on them to put the ball in the back of the net with regularity.

With this in mind we've decided to take an in-depth look at which forwards are making the most of their chances. To do so we've looked at players across the top five leagues with 11 goals or more this season, 22 players in total, and divided that total with their expected goals (xG) tally on understat.com.

It gave us a score to show how many goals these attackers had scored for every one xG. The bigger the score the more clinical these players were, scoring a high percentage of low quality chances.

The results are surprising with only one Premier League player making the top 10. 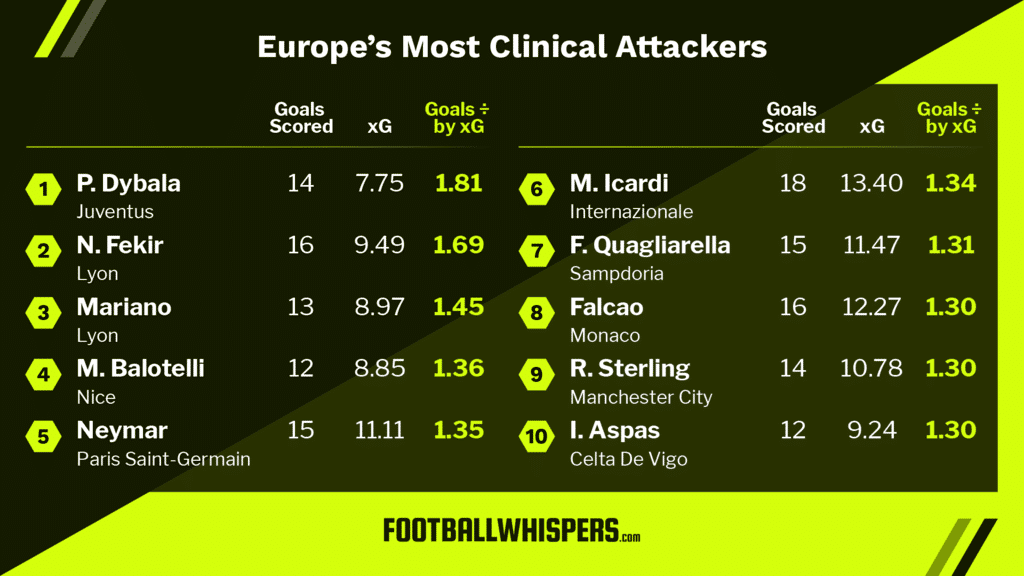 The graph above shows the top 10 in Europe. Manchester United transfer target Paulo Dybala tops the list having scored 14 goals in Serie A this term for Juventus despite having an xG of just 7.75. He's effectively scored twice as many goals for the high quality chances he's found himself in.

Nabil Fekir comes in second after scoring 16 goals for Lyon with an xG of 9.49. This won't come as a surprise to those who witnessed the goal he scored against Ligue 1 leaders Paris Saint-Germain during the 2-1 win for Bruno Génésio's men at the weekend.

It's worth noting that four of the top five on this list are plying their trade in France.

Mauro Icardi, rumoured to be a Real Madrid transfer target, comes in at sixth on the list proving he's as clinical as he is reliable. His xG for the season is 13.4 but he's netted an impressive 18 for the season for Inter Milan.

The surprise on the list is perhaps Raheem Sterling. The Manchester City wide forward has 14 Premier League goals to his name but an xG total of just 10.78. For a player often criticised and labelled as a poor finisher he's making the most of the chances presented to him this season.

When looking for Premier League players it's Mohamed Salah who is next up on the list, coming in at 13th. Liverpool‘s £39million summer signing has outperformed his xG this season even though many believe he's an erratic and wasteful finisher. The Liverpool No.11 has 18 league strikes with an xG total of 15.67.

Kane comes in at 14th. He's the top scorer on the list with 21 but his xG of 18.25 means he's overperforming but the difference isn't as great as others because he's getting high quality chances. For example Ciro Immobile and Edinson Cavani both have 20 for the season but their xGs are 15.47 and 16.4 respectively. 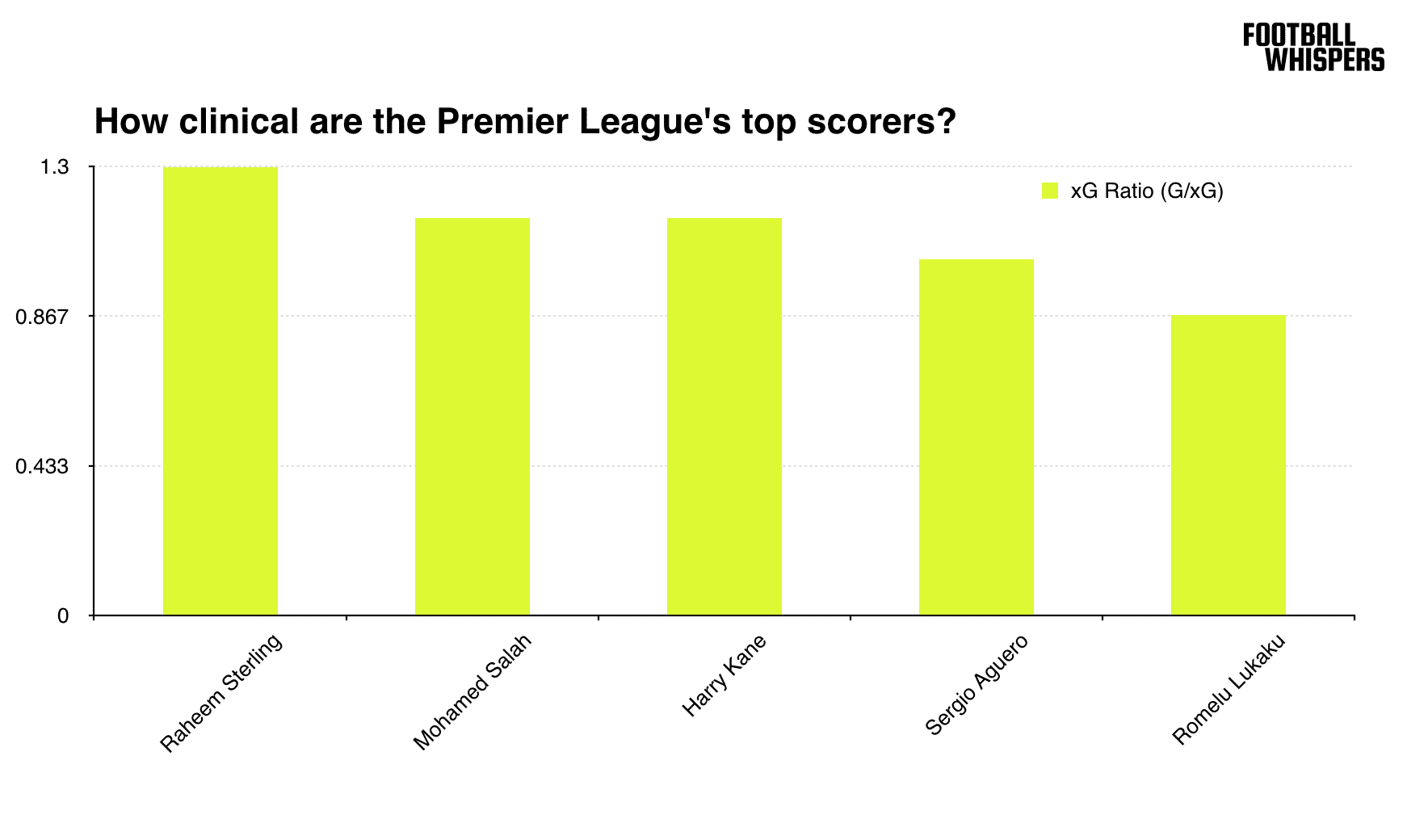 Sergio Agüero comes in at 17th after doing precisely what is expected of him. He's currently on 16 goals for the season and his xG is 15.54. He is the definition of reliable when given an opportunity in the penalty area.

The lowest ranking Premier League player on the list is Romelu Lukaku, who is 21st. Manchester United's £70million forward has 11 strikes to his name since his summer move to Old Trafford but the high quality chances he's had this season give him a xG tally of 12.58. The difference might not seem like a lot but the 1.58 could've turned two draws into two wins and reduced the gap at the top.

However, he isn't the only player underperforming this season. Messi and Suárez are both down on their xG scores with the Argentine 0.27 behind despite netting 19 this term while the Uruguayan's 15 La Liga strikes see him 1.04 down. Dries Mertens is 1.25 behind his xG tally of 12.25 in Serie A

The biggest under-performer is Arsenal transfer target Pierre-Ermerick Aubameyang. The Borussia Dortmund forward has 13 strikes in the Bundesliga but his xG total is 16.58. He's a player who is usually bang on when it comes to goals and xG. Such a discrepancy in January suggests links with a move away have had an impact on his form. Will he fail to take his chances at the Emirates?

In conclusion, we're not trying to claim Dybala is the best striker in Europe. After all, he's played close to 1,300 minutes this season yet his xG is just shy of eight. He's not getting into good positions on a regular bases meaning he's not the most reliable as a goal threat. But he scores chances he is not expected to and elite attackers do tend to over-achieve their chances.

Messi, for example, does so every season. However, conversion is fairly streaky, and it is hard to distinguish elite finishers from those unsustainably over-achieving over a sample size like half a season.