The deeper into the Champions League clubs go, the more reliable their players need to be. The opposition are better. Matches are tighter. And there are, usually, fewer high quality chances on a game-to-game basis.

Liverpool, Real Madrid, Juventus and Manchester City are already through to the quarter-finals, while Bayern Munich travel to Turkey with a 5-0 aggregate advantage. Barring a historical capitulation, the German's will be joining the quartet in the last eight.

Only three of Manchester United, Sevilla, Roma, Shakhtar Donetsk, Barcelona and Chelsea will progress, however, and it's at the quarter-final stage the competition really picks up.

With this in mind, we've taken a look at the most clinical players with five or more goals who are at clubs involved in the last-16 ties.

Chances are often scarce in these high-profile matches so sides need players who can put the ball into the back of the net without needing too many chances. Wasteful individuals can be the difference between progress and elimination.

And one of the best ways to do this is by looking at conversion rates.

The best conversion rates in the Champions League 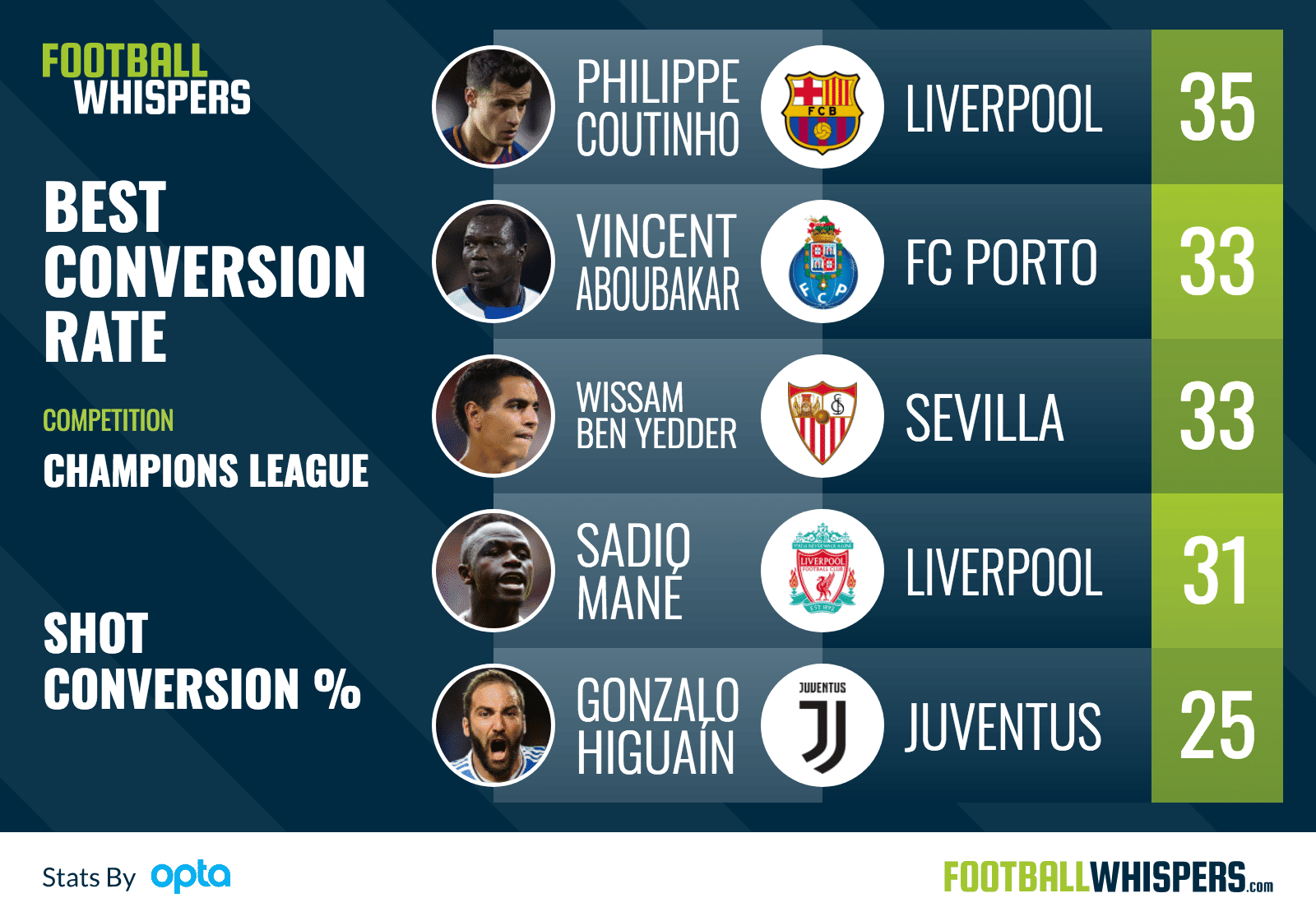 It will no doubt come as a surprise to many but Philippe Coutinho is the player with the best conversion rate in the Champions League. The former Liverpool No.10 found the back of the net on five occasions, an incredible 35 per cent of his 14 shots.

Unfortunately for Coutinho and Barcelona, who signed the Brazilian in January, he won't be able to add to his tally this term due to ineligibility, but he'll be one to watch during next season's campaign.

Next up is Porto's Vincent Aboubakar. The 26-year-old took 15 shots in his six matches and managed to find the back of the net on five occasions to – a 33 per cent shot to goal conversion rate.

Sevilla's Wissam Ben Yedder matches that rate having netted six of his 18 shots. Unlike the Porto forward, however, the 27-year-old has the chance to improve his tally during the return leg against Manchester United on Tuesday.

Sadio Mané has been excellent in Europe for Liverpool. The hat-trick he bagged against Porto in the last-16 helped, but take nothing away from the fact he's scored six goals from just 19 shots in total.

Gonzalo Higuain, the man who put Tottenham Hotspur to the sword, sneaks onto the list having converted 25 per cent of his shots into goals. Against Mauricio Pochettino's men the Argentine showed he class, netting three goals and setting up the eventual winner.

With the exception of the Juventus No.9, the list isn't made up of names you'd expect to see.

So how are the most prolific forwards across Europe getting on in the Champions League?

How Europe's elite attackers are faring 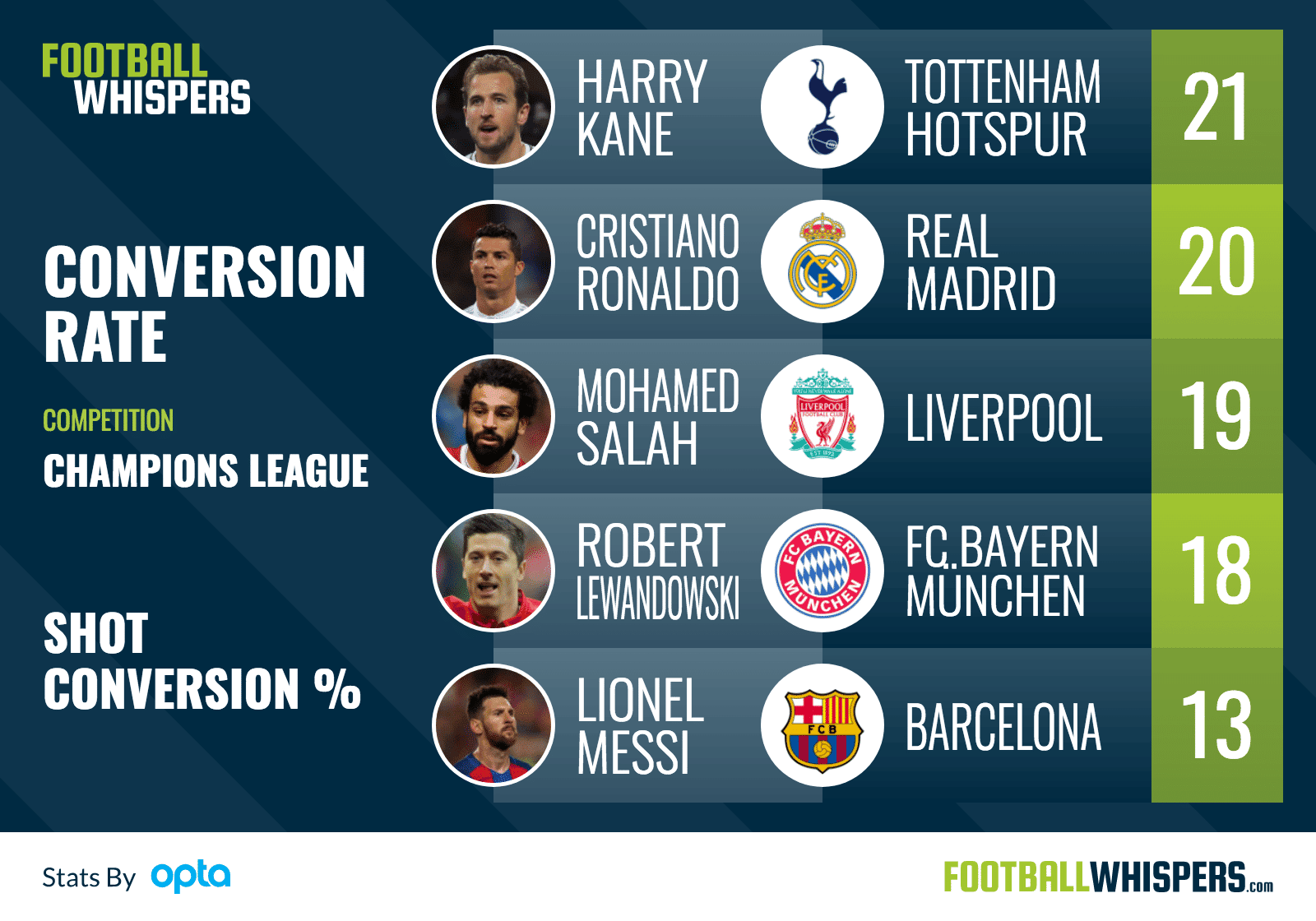 It'll come as no great surprise that no player has had as many shots in the Champions League this season as Cristiano Ronaldo. The Real Madrid attacker has taken aim at goal 59 times this season and found the net on 12 occasions. He's got a 20 per cent conversion rate but it goes to show he's reliant on volume as opposed to being clinical.

Next up in terms of shots this season is Robert Lewandowski. The Bayern Munich No.9 has rattled off 33 shots and found the net on six occasions to give himself an 18 per cent conversion rate, three per cent down on his Bundesliga record this season.

Kane ranks third for most shots (32) in the Champions League but is, on average, averaging 1.1 more shots in the Premier League than in Europe. Spurs fell out of the Champions League last week with their No.10 having notched seven goals, which gives him a 21 per cent conversion rate.

Just like in the race for the Golden Boot, Mohamed Salah isn't far behind Kane on this list. The Liverpool attacker has managed 31 shots and has six goals to his name as the Reds head into the quarter-finals. However, he's two per cent down on the Spurs man when it comes to converting shots into goals.

Surprisingly, Lionel Messi has just four goals in this season's competition despite having 29 shots. His conversion rate comes in at just 13 per cent, which may seem low but it's only two per cent fewer than his La Liga record this season.

Paulo Dybala, who was named as the most clinical attacker in Europe earlier on in the campaign, hasn't been able to replicate his Serie A form in the Champions League.

His goal against Spurs, which turned out to be the winner, was his first in Europe this season despite the fact he's had 29 shots. It gives him a meagre three per cent conversion rate, way below his 20 per cent in the Italian top flight.

Meanwhile, Neymar, the world's most expensive player, managed 28 shots in the Champions League for Paris Saint-Germain prior to their elimination. He converted 21 per cent of his shots – better than both Ronaldo or Messi. However, it won't be enough for him to win the Ballon d'Or given PSG's early exit.

Liverpool's Roberto Firmino, often criticised for not being clinical enough, has managed to convert seven of his 28 shots, while Edinson Cavani's conversion rate in the Champions League also comes in at 25 per cent.

Like Firmino, the Paris Saint-Germain No.9 isn't considered to be one of the most reliable in the box despite his goal record over the years. Yet he has a higher conversion rate than the likes of Ronaldo, Messi, Kane and Neymar.

The final player to have had 25 shots or more is Son Heung-Min. The versatile Spurs forward netted four goals in the Champions League but his conversion rate comes in at just 16 per cent.

However, his conversion rate in the Premier League isn't much better, coming in at just 18 per cent.