Football Manager isn’t just a game no matter how much we try to kid ourselves. It’s a blank canvas. A way for you to bring your ideas to life without actually spending thousands on coaching badges. Best of all, if it fails nobody has to know because you just restart the game. You're the architect and It’s your design to do with as you please.

Everybody has their own tactic and style. One they spend hours, days, weeks or even months carefully crafting. The end game for many is to be able to boast about their achievements using their very own unique system. Sometimes though it can get a little bit boring because when it clicks, and you piece together a team that’s just perfectly balanced, you’re practically unbeatable.

So, when Football Manager 2017 was released, it was around the time Liverpool were good. The release was sandwiched between Jurgen Klopp’s men beating Crystal Palace 4-2 and then dismantling Watford 6-1. They really were the best football team in the land and I wanted my virtual team to be playing exactly like that.

To fully understand and appreciate his methods I had to get into the mindset of the man I was trying to impersonate.

I already had the unkempt facial hair and glasses. I found an old baseball cap and, to the annoyance of many, I replaced the word ‘football' with ‘fussball‘.

I was naive enough to believe such a project would be fairly straightforward. My better half was even kind enough to buy me a tactics whiteboard to aid me throughout this journey.

*side note* I’m going to be honest with you all now. The whiteboard arrived with 13 red magnets, 13 blue ones, two yellow ones and a black one. The red, yellow and black ones are all safe and sound but the blue ones, well, they are down to nine. A pre-season 5-5 draw is to blame for the lost souls.

A few ground rules. I'm not trying to replicate the pedestrian passing, can't score a goal incarnation of Klopp's Liverpool side.

I'm looking to be the free-flowing red arrows who tormented opposition both home and away. On paper they would line up in a 4-3-3 formation but when the match kicked off it was just a blur of red with players popping up everywhere.

When Liverpool were attacking Sadio Mané would tuck in from the right flank and Philippe Coutinho would do the same on the left hand side. The pair would get close to Roberto Firmino in central areas and the trio would then have support from one of the midfielders, usually Adam Lallana. The width would then be provided by the full-backs in the form of James Milner and Nathaniel Clyne.

Jordan Henderson would drop between the centre-backs and the remaining midfielder would act as a link man or as cover. A lot of thought and time went into this and, like Victor Frankenstein, I am proud of my creation. 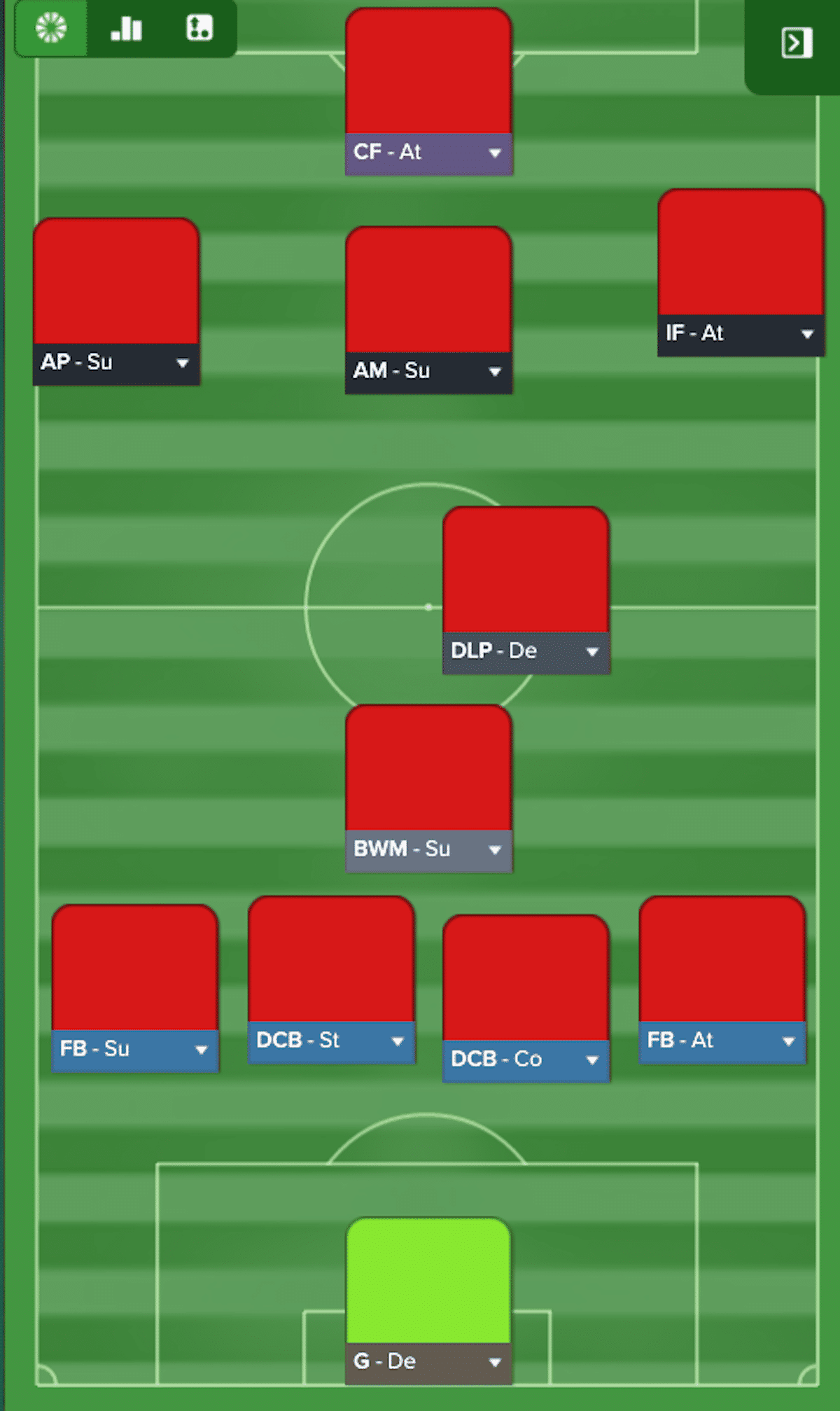 I'll start off by explaining the thought process behind the attack.

I want as many attacking players centrally as possible.

The complete forward leads the line because I didn't want a specialist, I wanted an all-rounder. Some might say a more clinical Roberto Firmino and they'd be on the money.

On the left I went with an advanced playmaker. Coutinho often filled that role for me and I wanted him to be the purifier in the final third. Everything goes through him and he leaves the garbage behind.

To accommodate him I had the player behind the striker as an attacking midfielder. He, usually Firmino, push on to support the striker an vacate that area of the pitch ensuring his compatriot had more space to work his magic.

The right hand side of the attack saw me deploy an inside forward. Mane would look to drift into central areas whenever the attack was progressing so to free up the right for my full-back. At least that's how it would work in theory.

The midfield took some time to settle on. The deep lying playmaker is used as a replacement for the real life link player. I wanted a player there who could not just keep play moving but who could also play incisive passes forward. He would line up ahead of the ball winning midfielder, a role Henderson plays for Liverpool now. He's there to basically protect the centre-backs and cover for the full-backs when they are supporting the attack.

I'd love to be able to give a detailed explanation with regards to the specifics for the defence but it was very much a ‘throw enough mud at the wall and eventually something will stick' process. Oddly enough, wing-backs just didn't work as well as full-backs. I tried many variations but the one listed was the most resilient. It will, of course, depend on the players you're using.

I tested out using a sweeper ‘keeper and he got lobbed in successive matches so that was swiftly binned. 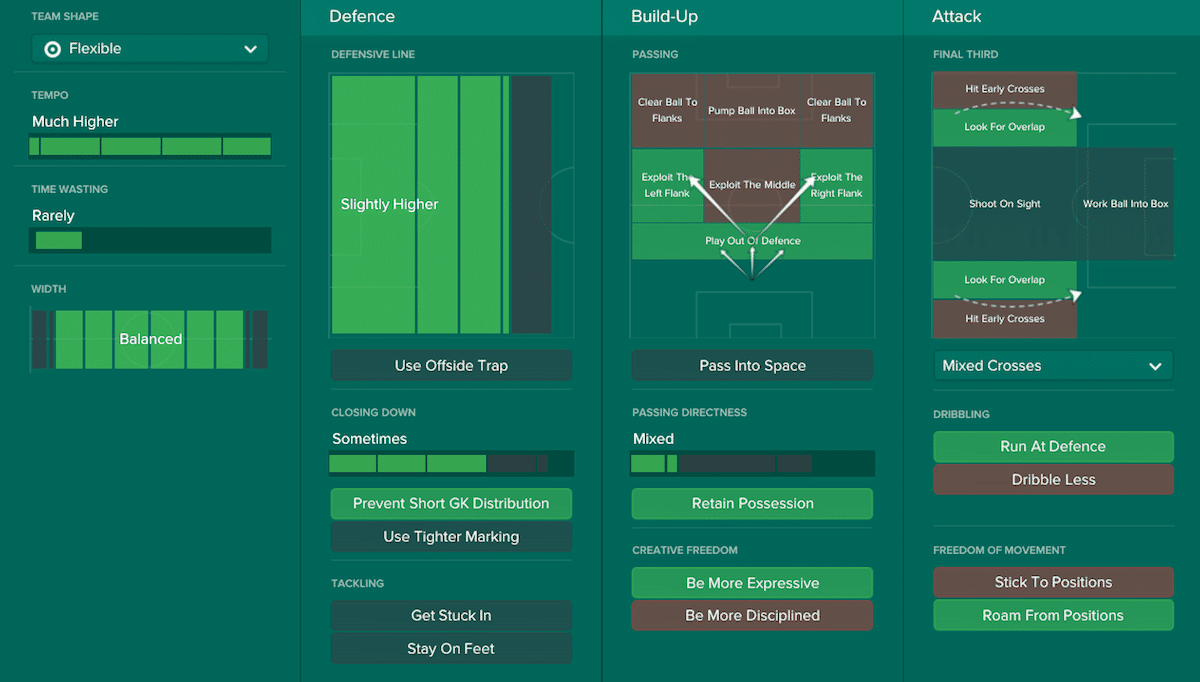 As you can see with the instructions I tried to replicate a pressing game of sorts. The slightly higher line meant my players were in advanced positions and preventing the short goalkeeper distribution meant I had players in attacking areas of the pitch for when the ball was turned over. I didn't want to waste possession but I didn't want to be too regimented so I allowed them to be more expressive and roam from positions.

It was about trying to get the right balance of organised chaos.

The Liverpool attack in action 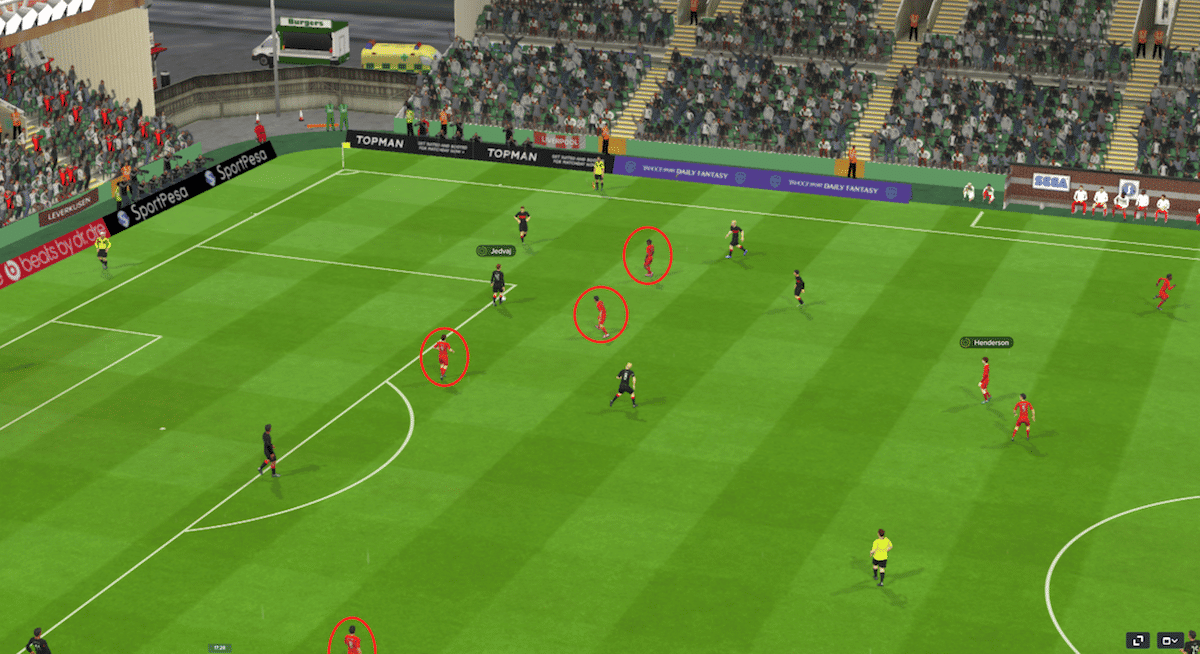 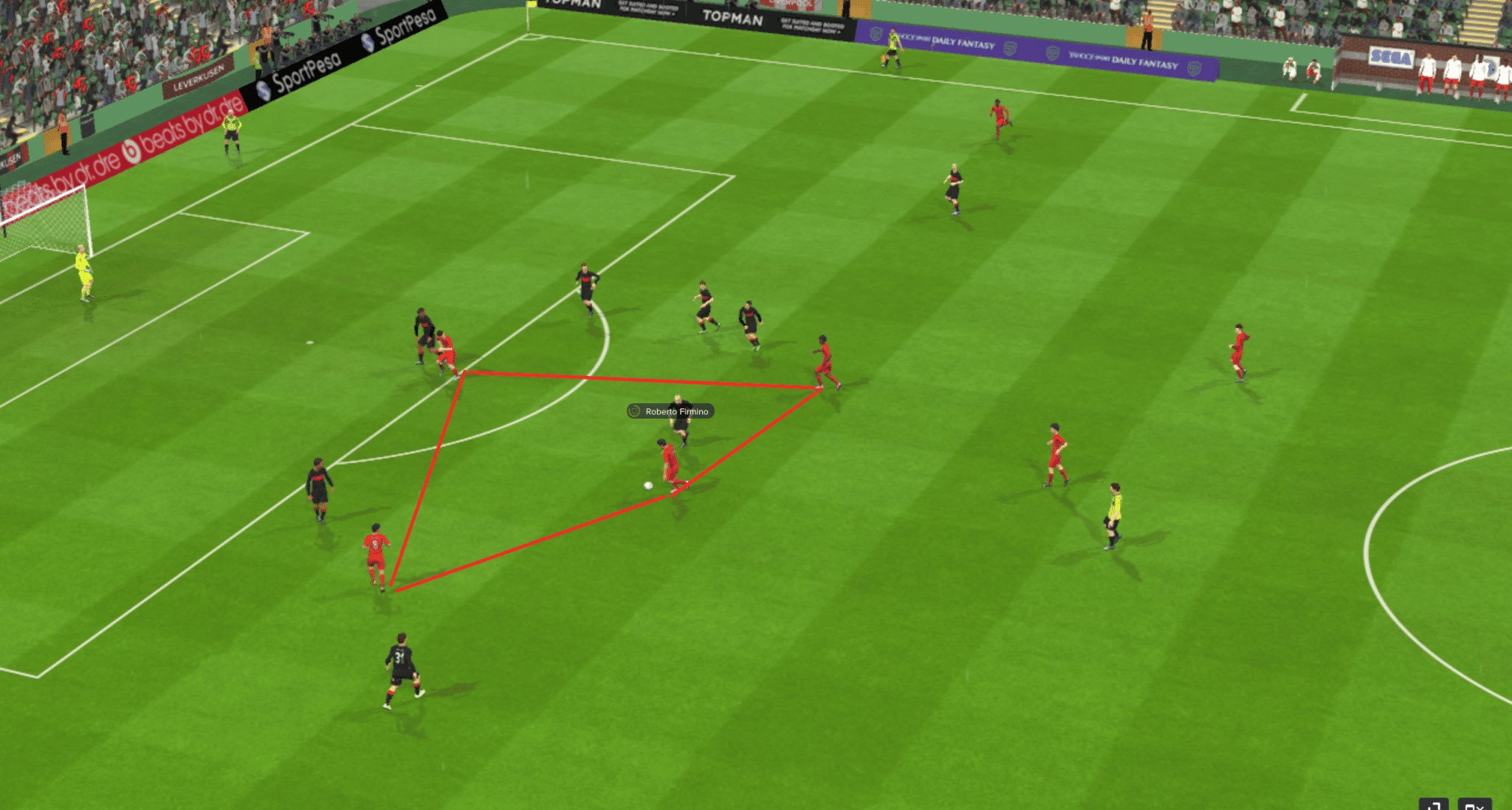 In the first picture the attack, circled in red, are looking to stop the opposition from playing out from the back. The midfield are well in the opposition's half looking to engage as the second phase of the press if they are able to play the ball past the attack. It's not flawless but Klopp's isn't either and as you can see I've got them hunting in a pack and making it really difficult to start their attacks from deep areas.

The next picture shows the Liverpool attack after regaining possession. The wide players have quickly drifted centrally and It's almost like a narrow diamond. The purpose of this is to make passing triangles in an attempt to play it around the now narrow backline. It creates a lot of space in the wide areas for the full-backs to attack. 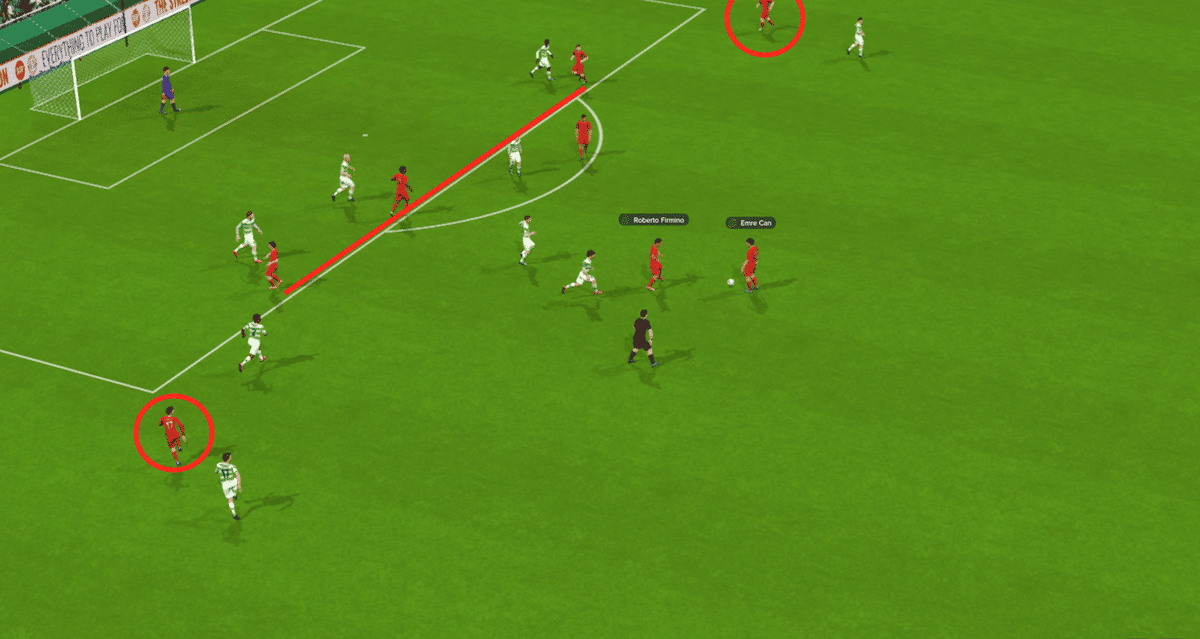 It often resulted in the above scenario. I'd have possession in central areas, the attack would be narrow (the front three are joined by the red line) and there would be plenty of space to attack for the advanced full-backs (circled in red).

The ball would worked into the channels behind the opposition's full-backs and one of the four players arriving into the penalty area would be able to finish off a well worked team move after the ball is cut back.

It's simple yet effective. 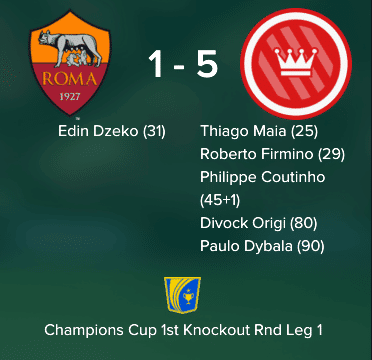 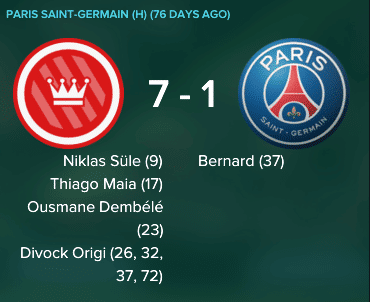 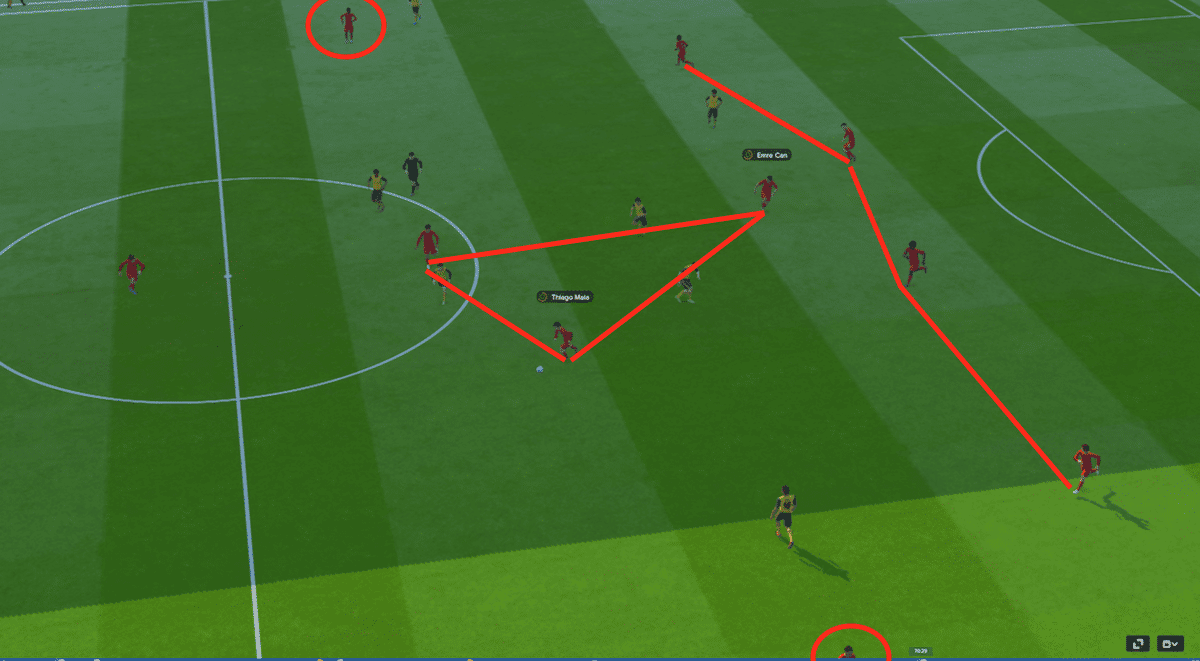 The shape of the team is clear in the picture above. The attacking players drop back but stay wide so to stretch the opposition when the ball is back in our possession. The ball winning midfielder is sitting in front of the defence with the attacking midfielder in a withdrawn role to make it look almost like a 1-2 midfield, exactly how the Reds play now.

The positions the player's took up meant they had passing triangles throughout and were often able to play their way out of trouble and quickly turn defence into attack. Sounds familiar doesn't it?

Squint at the pictures and you could easily mistake them for actual game footage from a Liverpool match. That's how eerily similar the tactic is to Jurgen Klopp's in real life. Give it a go and if you have any questions then feel free to ask.