Part of my role at Football Whispers is to write about all of the goings on at Arsenal. With Arsene Wenger, Thierry Henry, the French connection and my love of all things Ligue 1, I’ll confess, I’ve always had a bit of a soft spot for the Gunners.

There has always been a will for them to do well. It’s fizzled out a bit over the years thanks to the way that Le Professor has stagnated at the club with respect for the legendary boss dwindling as his time in north London continues.

Now, in my mid-30s, my time to play Football Manager has disappeared as quickly as Arsenal’s title challenges. Back in the glory days I took a bankrupt Partick Thistle from the First Division in Scotland to the UEFA Cup – that’s how long ago it was.

Splashing out on the mobile version of Football Manager 2017, I think I can find the time to finally embark on another mission. 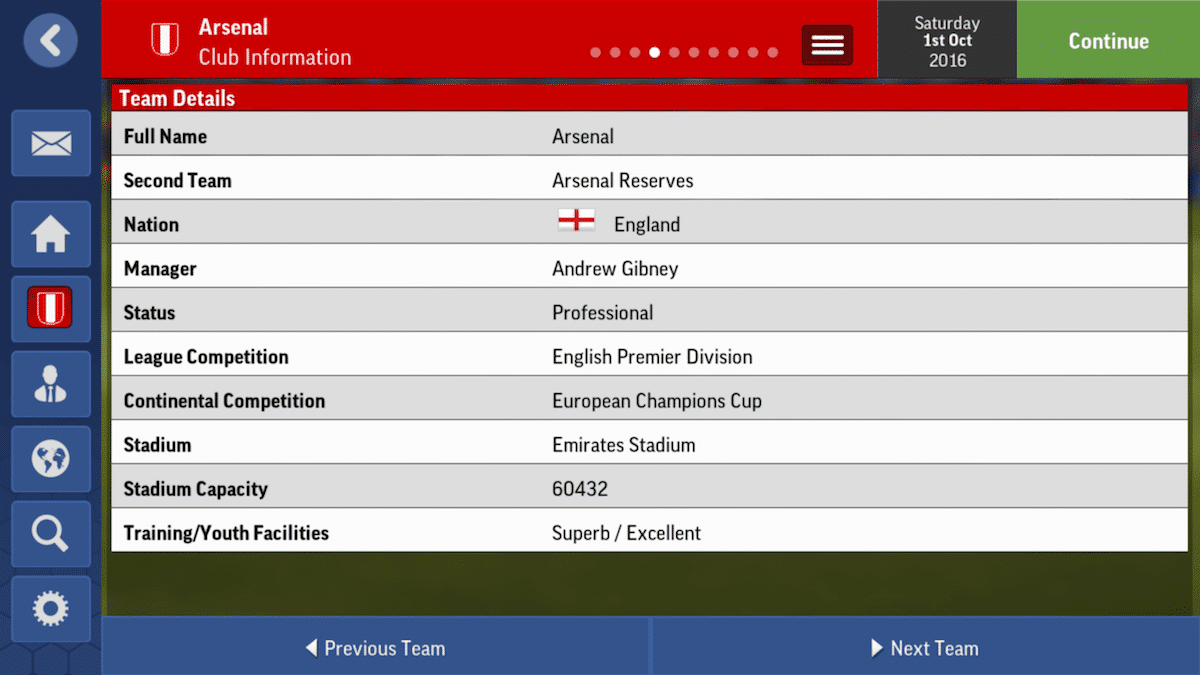 How hard can it be to turn the north London club into title contenders and get past the last 16 of the Champions League? That’s my first goal, something that I’d hope would have Gunners fans dancing in the streets.

Handed a transfer budget of £65million budget I rake over up my knowledge of the team and their failings from the past few seasons and prioritise my needs: a centre-forward, left-back and defensive midfielder.

There’s only one name in my head when it comes to the attack: Alexandre Lacazette. However, if Jean-Michel Aulas has his way, it’ll take up the majority of my funds.

A cheeky £30million bid is rejected. OL want £48million, which I’m willing to pay. But I can’t tell the French that. My bid is increased gradually to £42million and I have my man. I’m already a hero in Holloway and a million clickbait websites are devastated they can no longer link the 25-year-old to a different club each day.

Before the ink is dry, my left-back search looks scuppered. I’ve only £23million to spend and Valencia’s £38million asking price for Gaya has me muttering broken Spanish for ‘Please, I need him.’ 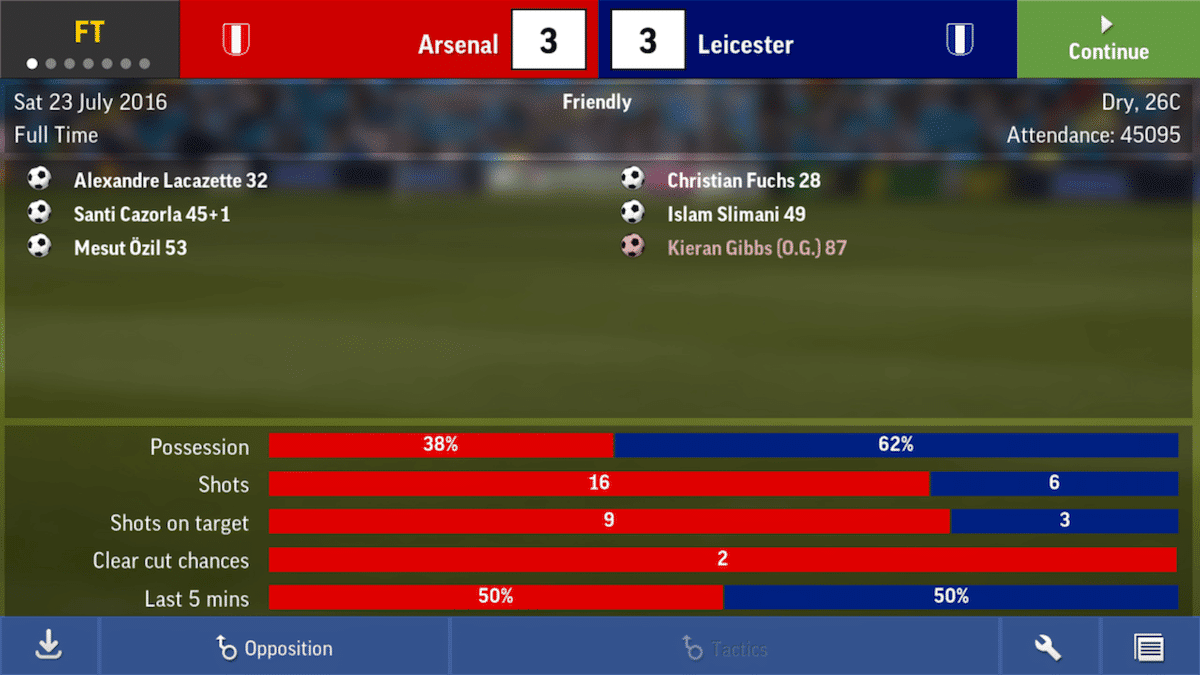 We start pre-season with a 3-3 draw against Premier League champions Leicester City. That proves my 4-2-3-1 system needs work defensively so we change to 4-1-2-1-2 against Barcelona. Although we find ourselves 3-0 up in the first half, I’m pegged back to 3-2 and it’s back to the drawing board.

Then, lightning strikes, if defensive midfield is a problem position why not play three of them? Safety in numbers.

I change to 4-3-3 with three deep-lying midfielders and Alexis Sanchez to the left of Lacazette. But because this is not real-life and Mesut Ozil is not a sulking mess, the shape adapts to a 4-3-1-2, pairing the Frenchman and the Chilean in a dream partnership, the German just behind them. 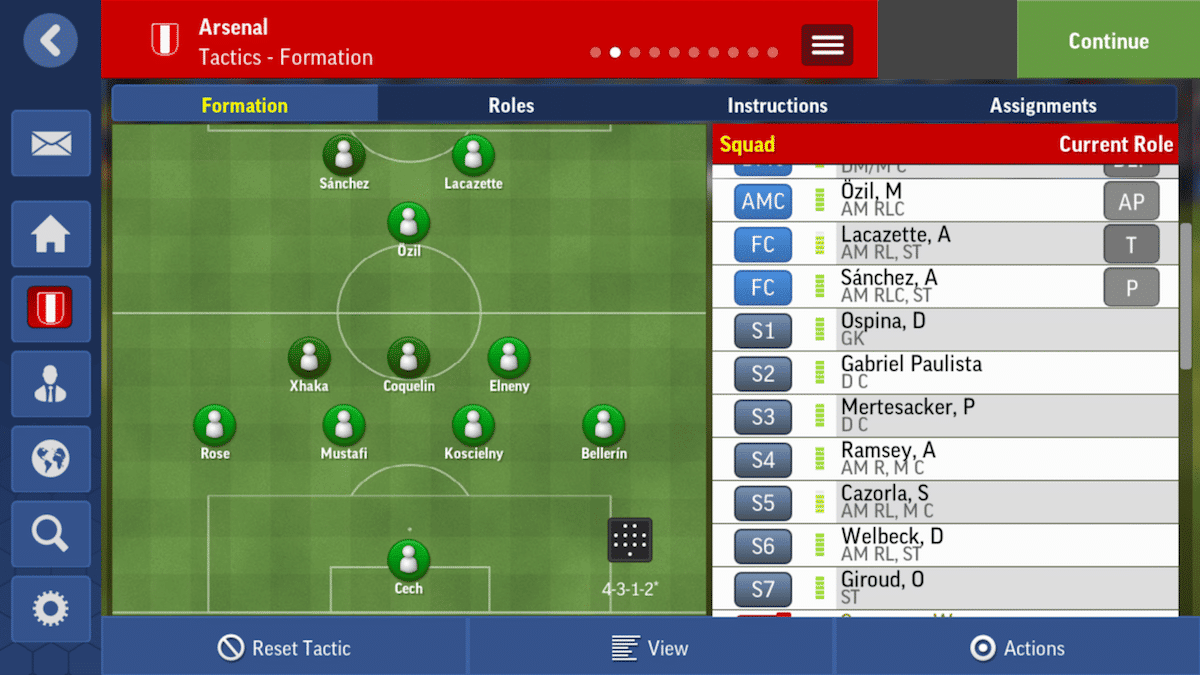 A goalless draw at home to Real Sociedad, where the Spanish side fail to have a shot on goal, proves things are going in the right direction.

Off to Switzerland we go for the Champions League draw and out of the hat come Rosenborg, Lyon – obviously – and Real Madrid. Not great, but it could be much worse. Reinforcements are needed. 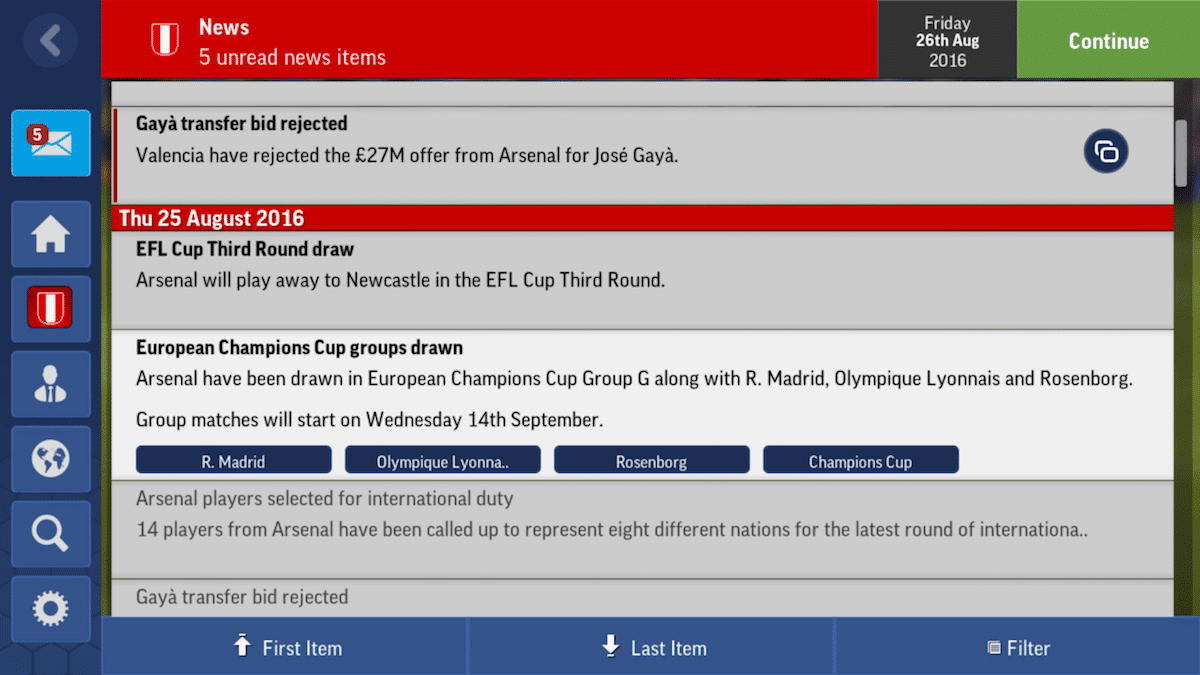 In order to raise funds for a left-back, Mathieu Debuchy is shipped off to Bournemouth, Yaya Sanogo is bundled into a van and left in the car park of the Stade Louis II in Monaco with a note and my PayPal address. I receive a payment for £1.8million from a Russian account and nothing more is said.

My new formation doesn’t allow me to have so many wide players. So an £18.75million bid from Middlesbrough for Alex Oxlade-Chamberlain is accepted and my war-chest is replenished.

Then we get an email, which is unexpected. Danny Rose has spoken to the press. He’s unhappy and wants to join a team with ambition so Spurs put him on the transfer list.

My secretary – or fiancee – has never seen me move so quick. I enquire and, to my surprise, they don’t laugh down the phone. We have another Sol Campbell on our hands. We strike a deal at £13million and it's just as well I had my striped jumper and mask on that day. 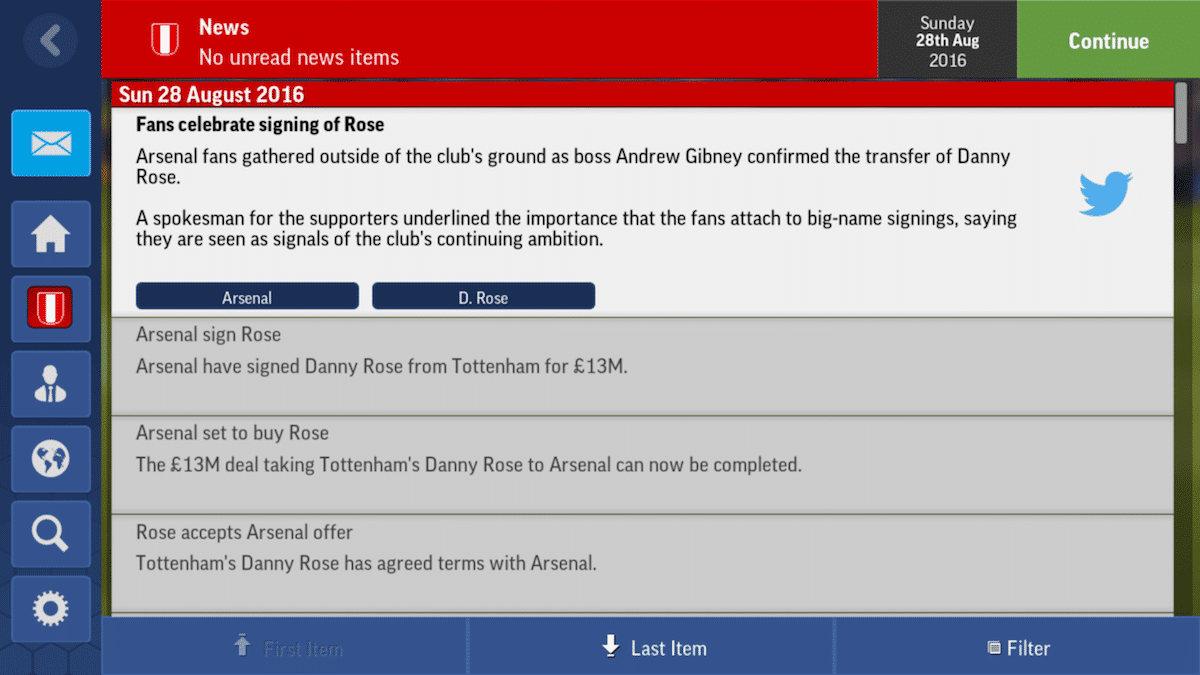 READ MORE: HOW GIROUD AND SANCHEZ COULD BE A BEAUTIFUL DUO

I try to hide my snigger as I hand a swag bag of cash to Daniel Levy. The King of the Transfer Window? I think not. He's mine.

Arsene who? New hero at Arsenal

We open the season against Manchester United at Old Trafford. This is far from ideal considering Arsenal’s great record against top clubs. I test my risky three-man attack and we take the lead when Lacazette stuns the home crowd after 22 minutes.

The irony is not lost when United’s summer signing, Salomon Kalou, equalises before half-time. But Jose Mourinho's men can’t handle the Alex-ette partnership and Sanchez silences the home crowd with the second half winner.

Bournemouth are next and Eddie Howe’s side refuse to bow down to my power at the Emirates. The Cherries dominate possession but a 14th-minute solo effort from Sanchez is enough to keep the three points are in north London.

A tough trip to Middlesbrough will finish off my first month in charge. The 4-3-1-2 works perfectly. Setting up to hit on the press, Aitor Karanka’s men can’t handle us. Lacazette after five and Sanchez on 26 minutes put the game beyond the Teesside club before Theo Walcott comes off the bench to make it three.

The only black mark is an injury to Rose. Luckily he’ll only miss 10 days with an ankle knock. 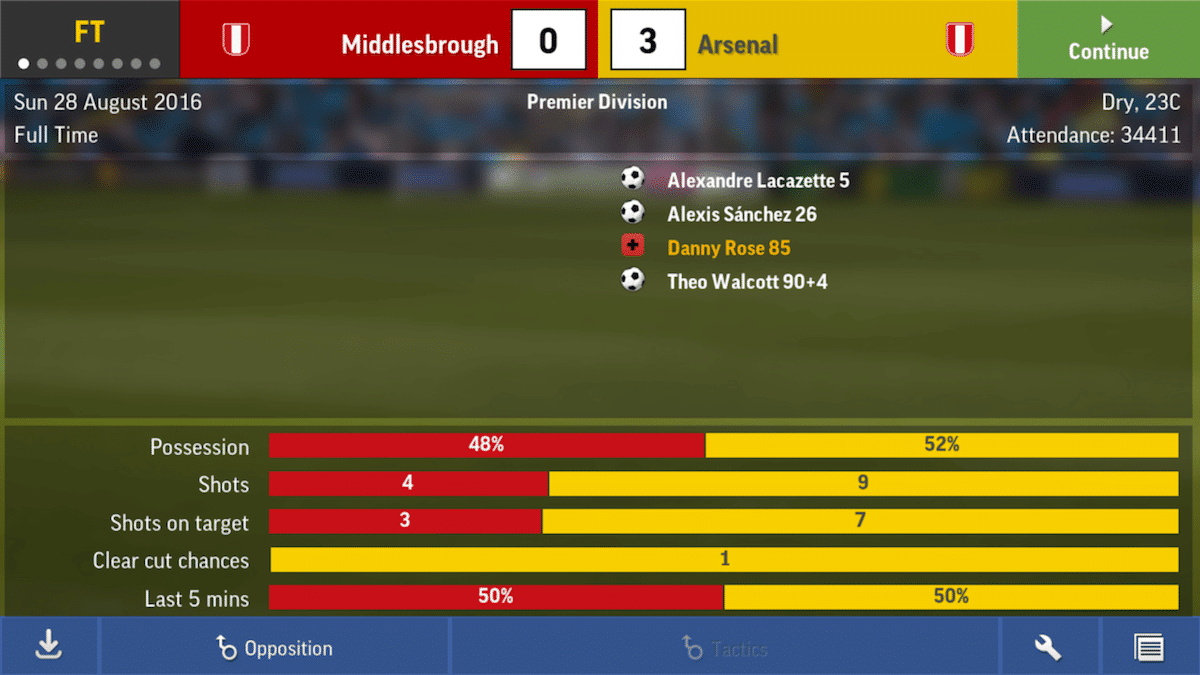 Manchester United blindside me with a £57million offer for Alexis Sanchez. The little forward has three goals in three games; Jose Mourinho must think I’m mad. In one swift move his offer is set on fire and we convince the 27-year-old to sign a new five-year-deal, keeping him a Gooner until 2021. Genius.

Deadline Day is upon us, and with the cut-price deal for Rose, I still have £25million to spend. Forget net spend, I’m going all in for a central midfielder.

Bids are all made for Sporting’s William Carvalho and Lyon duo Maxime Gonalons and Corentin Tolisso. But it’s a firm no from OL for the former.

Atletico Madrid scupper my plans by offering £26million for the Portuguese midfielder and I can’t go above £25.1m. Tolisso is my only hope. He may not hugely improve what I have but my plans are foiled if any one of Granit Xhaka, Francis Coquelin or Mohamed Elneny pick up suspensions or injuries. 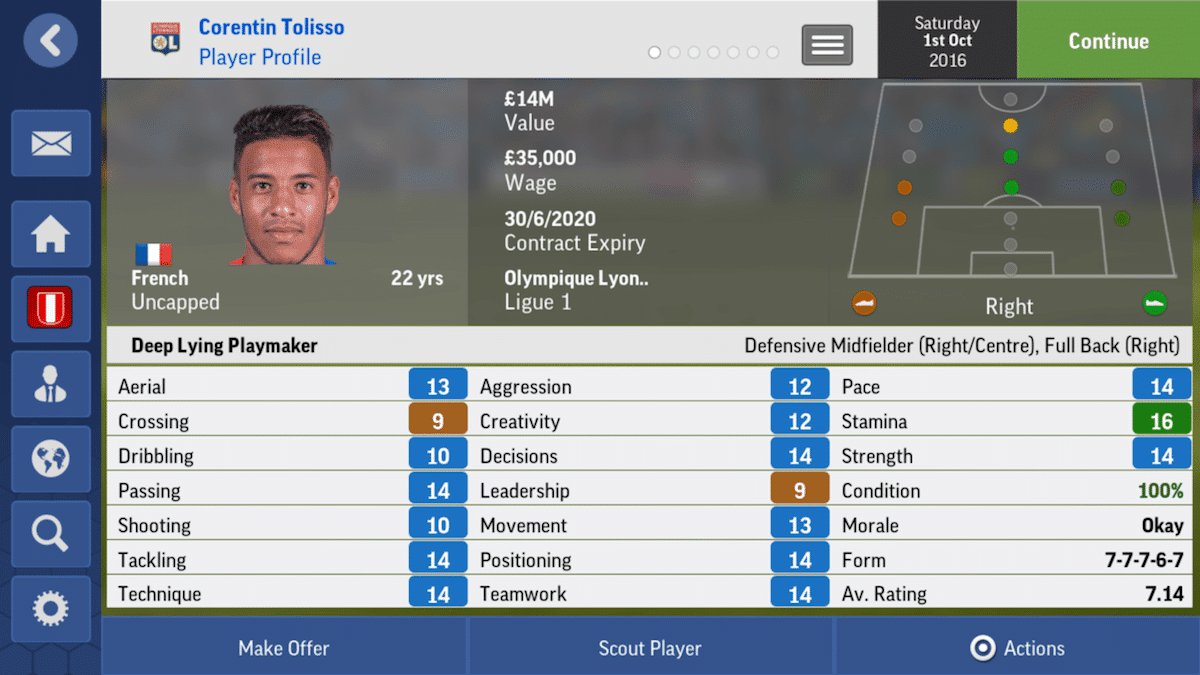 To my surprise, our bid is accepted. We offer the Lyon youngster a decent wage packet and I'm confident he will cross the Channel.

That is until the clock strikes midnight and the transfer window closes.

ARRRRRGGGHHH! Why did we buy that fax machine from Manchester United?Damn you, Wenger! Aulas says he ran out of ink – of course he did.

This could be a turning point. I’ll be back Lyon, wait for me Corentin.