Tottenham Hotspur might have to start planning for life after Christian Eriksen. According to reports in Spain, the midfielder has already agreed terms with Real Madrid and the La Liga side are prepared to wait until the summer of 2020 to sign him on a free.

The report goes on to claim the 27-year-old could even leave this summer if Los Blancos can strike a deal below the €150million Spurs chairman Daniel Levy wants for his Danish maestro.

As things stand, it feels more of a when and not if Eriksen leaves the Premier League. And Spurs will no doubt be planning for that eventuality and have a shortlist already drawn up.

Here, we have put together our own list of players who could replace the Spurs No.23 at the Tottenham Hotspur stadium.

The Belgian midfield has been a revelation since joining Leicester City on loan during the January transfer window.

His performances will no doubt have caught the eye of many of Europe's elite and with the Foxes not having an option to buy in their deal it seems unlikely they'll be fronting up that queue this summer. 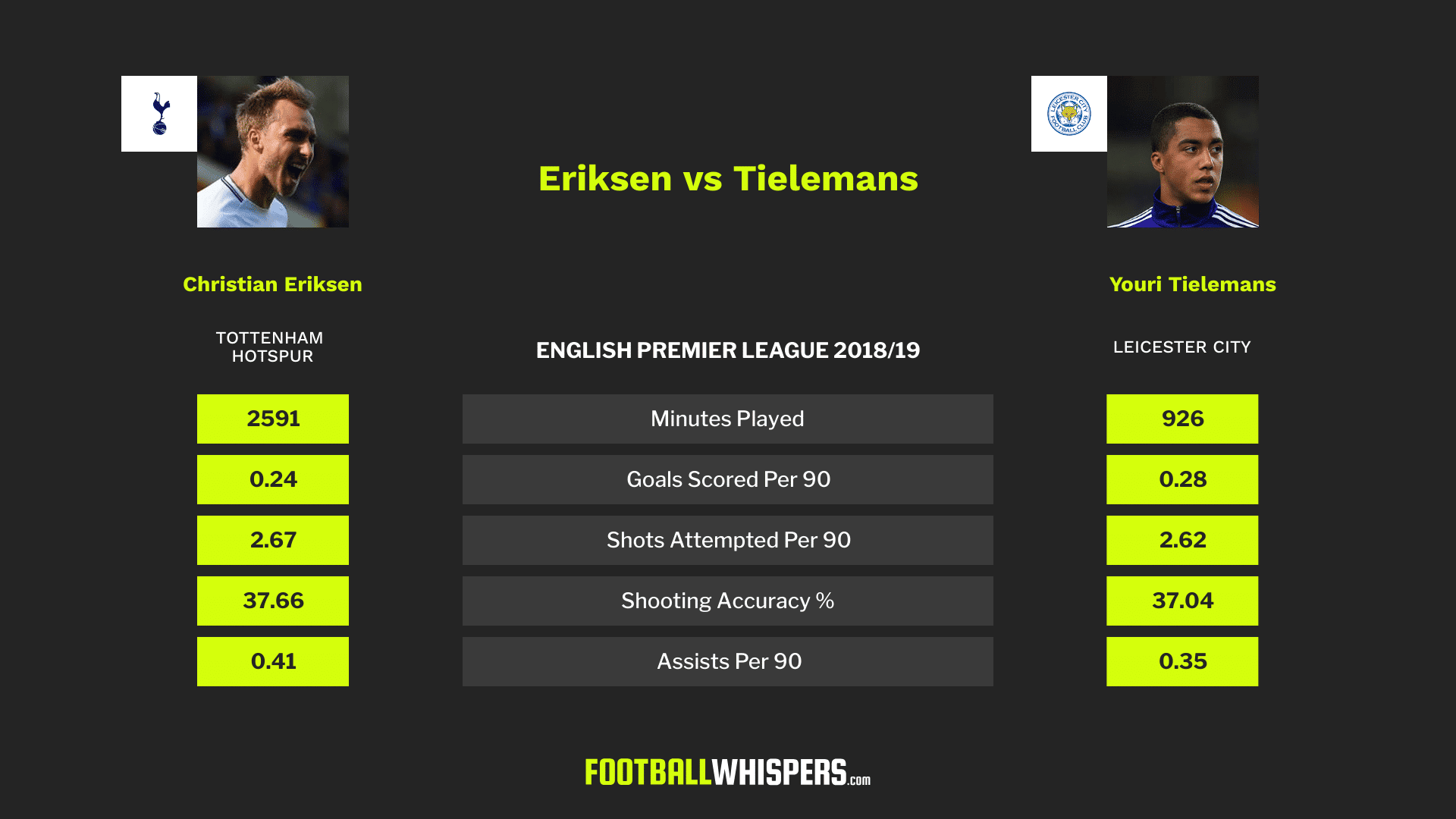 The 21-year-old struggled to impose himself during his first season with Monaco but his second campaign improved. He'd found the back of the net five times in 20 Ligue 1 matches before the French side opted to trade him for Adrien Silva.

Many wondered whether Tielemans would adapt to the rigours of the Premier League in such a short space of time, but it's almost as though he was made for England. He's scoring and creating goals with regularity and he's already struck up an understanding with James Maddison and Jamie Vardy.

His goals per 90 ratio is better than Eriksen's despite him playing in more of a withdrawn role and his assists per 90 stat is just shy of the Dane's which is nothing to be ashamed of. Only two players, Eden Hazard and Ryan Fraser, can better Eriksen's return of 12 this season.

Tieleman's versatility could see him play Eriksen's role, as well as Dele Alli's, as a free No.8 in the middle third. Spurs would have to shatter their transfer record to sign him but he's worth it.

Perhaps not a like-for-like replacement, Fernandes brings goals from midfield and has the potential to win matches single-handedly.

He's more of a goalscorer than a creator, perhaps similar to Alli during his first season in the Premier League, but that isn't to say Pochettino shouldn't look at him as a possible replacement for Eriksen.

But with Alli showing he can do a job in a deeper role this term, perhaps he's the man to replace Eriksen with Fernandes the man taking over from the England international in a more advanced position.

Fernandes' greatest value to any potential buyer is just how many goals he scores from inside the penalty area. Last season he averaged 0.19 per 90, this term that has jumped to 0.42.

Of course, he is on penalty duty, and he clinical from 12-yards, so that will help that particular stat, but anyone who has watched the Portuguese star will know he’s regularly finding himself in high-quality areas inside the area. And he can finish with both feet, making him even more dangerous than most.

If Spurs want to shake things up, he could be the ideal man to do it.

Spurs fans will know all about van de Beek after the Ajax man scored what turned out to be the winner in the first leg of the Champions League semi-final between the two sides.

The 22-year-old doesn't get as much attention as team-mate Frenkie De Jong but while the Barcelona-bound maestro is more aesthetically pleasing, the Ajax No.6 is more reliable in terms of output.

In the Eredivisie this term he's averaged 0.35 assists and 0.31 goals on a per 90 minute basis. He's in the top ten for both metrics when looking at midfielders in the Dutch top flight. He's also averaging 0.20 assists in the Champions League as well as 0.30 goals.

Van de Beek is delivering in the very best club competition while playing for a team many people believed to be underdogs.

On first appearances, he may not seem as creative as Eriksen but the Ajax man averages 0.35 open play assists per 90 to the Dane's 0.20.

Different leagues and different systems but there's evidence there to suggest the former Chelsea transfer target could be the man to replace the Spurs No.23. 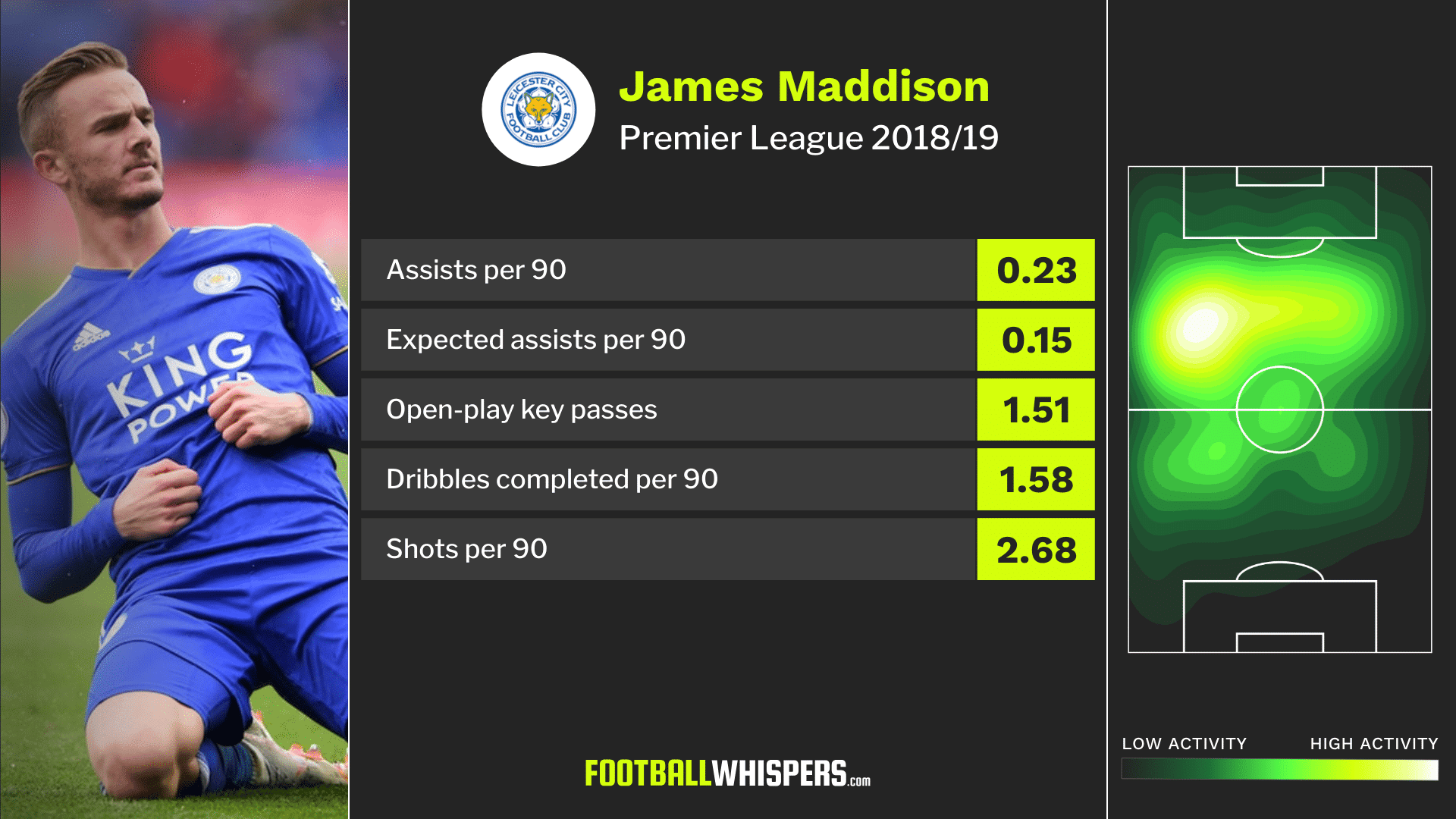 A player many top clubs probably wish they'd signed last summer when he moved from Norwich City for £20million. The 22-year-old has been one of the bright sparks for Leicester City in what has been an inconsistent season for the club on the pitch.

There's an Eriksen vibe about the way he plays and the positions he picks up. He's managed 14 goals involvements in his debut season in the Premier League and he's only going to improve under Brendan Rodgers.

If Pochettino gets a hold of him, he could be a special talent and an attacking trio made up of Maddison, Alli and Harry Kane would be an exciting prospect for both club and country.