Manchester United were reportedly close to signing highly-rated Portuguese youngster Renato Sanches last summer, but their supposed hesitation allowed Bayern Munich to steal a march and seal a €35million deal for the teenager.

Now, almost exactly 12 months on, it looks as though the Red Devils might be about to get a second bite at the cherry. The German champions are thought to be close to agreeing a deal to sign 22-year-old German international midfielder Leon Goretzka from Schalke, meaning Sanches, who has struggled to make his presence felt at the Allianz Arena to date, could be surplus to requirements.

German football magazine Kicker reported last week that, once Goretzka's capture is rubber-stamped, Bayern will listen to offers for Sanches, and will consider allowing him to leave if they can recoup the €35million they forked out to sign him from Benfica.

United are believed to be readying a bid for the 19-year-old, as José Mourinho continues to seek top-class additions for his squad.

Things may not have gone to plan for Sanches in Munich, but he remains a young player of immense promise, and he could be the perfect man to take United's midfield to the next level.

A Tough Year But Renato Sanches Still Has Huge Potential 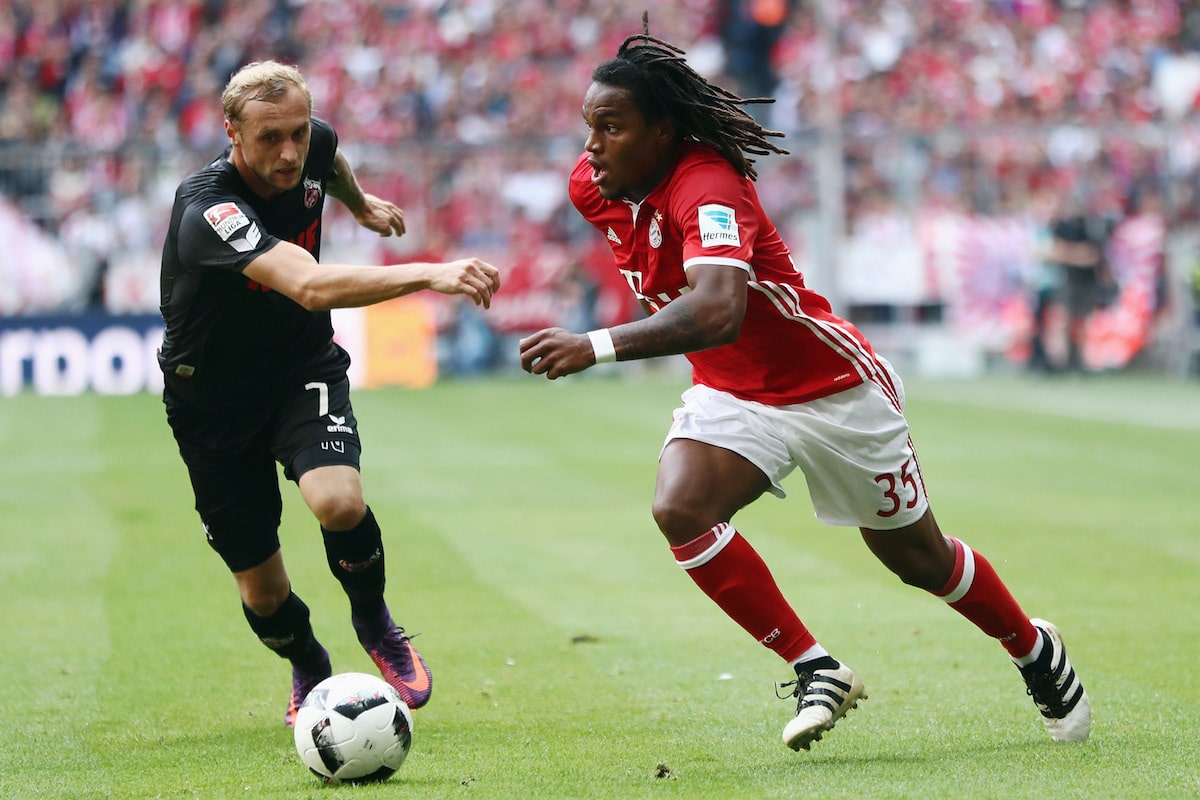 read more: should bale still be a Man Utd target?

Eyebrows were raised when Bayern swiftly wrapped up a deal to sign Sanches from Benfica on May 10, 2016. Not least because widespread reports had suggested that Old Trafford was his most likely destination, but also for that fact that, with a fee of €35million potentially raising to €60million with conditional add-ons, the Bavarians had stumped up an enormous sum for an inexperienced 18-year-old.

At the time, Sanches had less than one full season of professional football under his belt, having only made his Benfica debut in November 2015. But if there were any doubts over whether Bayern had made the right move, they were soon eradicated by the youngsters stunning performances for Portugal at Euro 2016.

As the youngest member of Fernando Santos' squad, Sanches found himself utilised as a substitute initially. But his dynamic displays soon made him a fixture of the starting XI. His goal and man of the match performance in the extra-time victory over Poland in the quarter-finals ensured his nation's progression, and his versatility, energy and quality with and without the ball helped Portugal claim their first ever major international trophy.

Voted Young Player of the Tournament, Sanches appeared to have the world at his feet ahead of moving to Munich for the 2016/17 season.

However, with just six starts in the Bundesliga, the youngster has failed to nail down a regular place in Carlo Ancelotti's line-up. With the likes of Thiago Alcântara, Arturo Vidal and Xabi Alonso for competition, the former Benfica man was always going to find it hard to get on the pitch at the Allianz Arena, but few would have expected him to have featured as little as he has.

With a paltry total of just 819 minutes under his belt in combined Bundesliga and Champions League appearances, Sanches is yet to find the net or register an assist for his new club.

It would be easy to suggest that perhaps Sanches is not cut out for life at the elite end of the game, and that the move to Bayern was too much to soon. And there might be a degree of truth in the latter, but the 19-year-old's displays with Benfica and Portugal should not be forgotten.

This season may have been a set-back for the young star, but there should be no doubt about his potential to become one of Europe's best box-to-box midfielders given the right time and coaching.

After all, there is no greater stage for a player to be tested on than a major international tournament such as the European Championships. At last summer's marquee event in France, Sanches was superlative, averaging 2.2 key passes and 2.6 dribbles per 90 minutes as his dynamism and energy caught the eye.

He may not have made as many key passes per 90 minutes for Bayern (0.6), hinting at perhaps a reluctance to take risks in his new surroundings, but his defensive numbers have improved in the Bundesliga compared to with Portugal last summer.

In addition to a growth in defensive acumen, the gifted midfielder has also shown more of a willingness to get on the ball, making 69 passes per 90 minutes to 52.1, and completing 88 per cent of them to 85.6.

Why Sanches Is The Man To Help United's Midfield Evolve 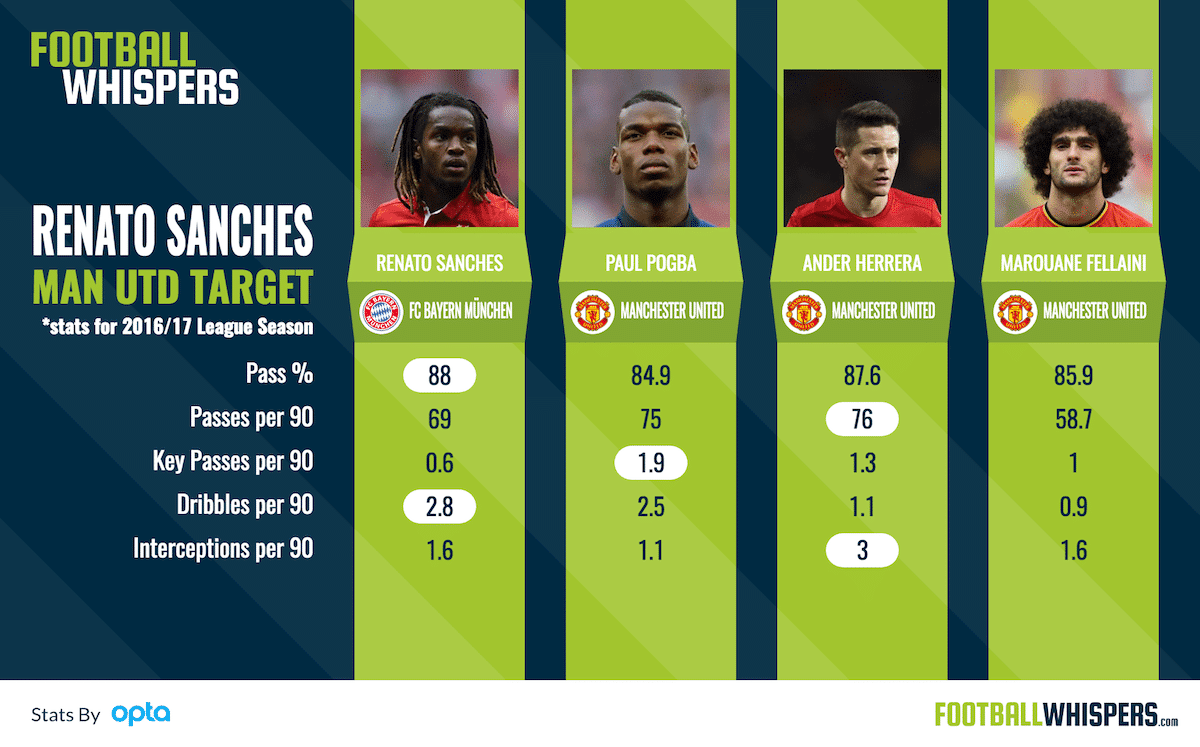 read more: pogba – finally getting the credit he deserves

During his short time in the Benfica first-team, Sanches played in a number of midfield roles, operating as a defensive midfielder or out wide as a winger, before seemingly finding a home in a box-to-box role.

At United, £89million superstar Paul Pogba has played his best football, as he did at Juventus, on the left of a midfield three, from where he can roam into attacking positions with the freedom of having a dedicated midfield anchor behind him.

This is perhaps also Sanches' optimum position given that he is left footed, but the Portuguese can also comfortably slot in on the other side of a midfield trio. Ordinarily, this would put him in direct competition for a starting berth with Ander Herrera, a player who has endeared himself to the Old Trafford faithful with his tenacity, work-rate and technical quality, and is viewed as a potential future United captain.

But, with the Red Devils reportedly on the lookout for a replacement for 35-year-old Michael Carrick at the base of their midfield, Sanches' arrival could kill two birds with one stone. Not only would the Bayern man, with his ability to cover ground, sensible use of possession and positional responsibility, be the perfect counterbalance to the roaming Pogba, he would also allow Herrera to shift into the deep-lying playmaker role in which he has perhaps performed best this season.

The Spaniard has the discipline, vision and technical quality to take over from Carrick, and with Sanches as a box-to-box shuttler on the right and Pogba as a roaming playmaker on the left, United's midfield would have perfect balance.

This would mean that Sanches would essentially assume the role that Marouane Fellaini has played in for much of the current campaign. The towering Belgian has his critics, but he has been effective at times thanks to his physical presence an aerial capability.

Though much smaller than Fellaini, Sanches can match the former Everton man's physicality – albeit in a more legal manner – thanks to his tremendous upper-body strength and remarkable knack for positioning his body perfectly in order to shield the ball.

What United would lose in aerial prowess by swiping the 6ft 4ins Belgian out for the 5ft 9ins Portuguese, they would more than make up for in technique, passing quality and athleticism.

Sanches is a much more capable passer of the ball than Fellaini, while also possessing the kind of low centre of gravity, strength, speed over short distances and dribbling that makes him incredibly useful when it comes to press evasion.

Mourinho's men have struggled against opposition who have pressed them this season – Fellaini's technical inadequacies and Carrick's diminishing powers have often led to possession being surrendered. However, a trio of Pogba, Herrera and Sanches – all technically gifted, athletic and able to quickly make sound decisions – would render the opposition's press not only redundant, but self-destructive due to the way they could play through the pressure and exploit the gaps in behind.

Despite the rumours of a move away from Munich for Sanches, Bayern boss Ancelotti recently insisted that the midfielder is going nowhere any time soon.

“Renato will still be at Bayern next season, that is 100 per cent certain,” the Italian tactician told Sportbild earlier this month.

“We will not sell him and neither will we allow him to leave on loan.”

The former Chelsea manager was emphatic in his insistence that Sanches is to remain a Bayern player. But the arrival or Goretzka could change those plans, as the Bundesliga champions already have young midfielder Joshua Kimmich in their ranks, so, even with Alonso retiring, there may not be room for the Portuguese prodigy.

If United have a chance of landing Sanches, although it might be a year later than they had initially hoped, they should do all in their power to bring him to Old Trafford.