So far this summer Chelsea have bossed the transfer window, adding value to their squad in the form of three high-quality signings. Antonio Rüdiger brings pace and flexibility to the back line, Tiemoué Bakayoko adds press resistance to midfield, and Álvaro Morata ensures Antonio Conte has a sound successor to Diego Costa.

But the reigning Premier League champions may not be done just yet.

Recently, it has emerged that they are among the list of potential suitors for Bayern Munich’s Renato Sanches. The 19-year-old, who is still viewed as one of the most exciting young players in Europe despite a difficult debut campaign in Germany, is said to have piqued Conte’s interest.

“There are at least 10 teams after Sanches. Conte asked for some information about him after Tuesday’s match because he knows he can make the difference on the pitch.

“[Carlo] Ancelotti was pleased with his performance against Chelsea so we can make some reasoning on him later. Almost certainly we'll let him leave just on loan, we still count on him.”

Conte has remained coy in spite of the growing rumours of a move for the Portuguese, however, stating: “About the transfer window, my club knows very well my idea, which positions we need to strengthen and if this is possible it is okay, if not we continue this way.”

Last summer, Sanches broke out on the international footballing scene courtesy of his performances for Portugal at Euro 2016. He appeared in all bar one of his country’s seven games on their way to winning the tournament, starting three times including in the final against France, the host nation.

By that point in time, however, he was already a Bayern Munich player. The German giants agreed a €35million deal with Benfica to secure the player’s signature, which was made official in May last year. But his first season of Bundesliga football didn’t quite go to plan.

Many expected his combination of immense physical strength and technical ability to enable Sanches to shine in Germany, but he failed to cement a regular starting berth in Ancelotti’s side. In the end he made a mere six league starts and 11 substitute outings. He also appeared six times on Champions League duty, but on just two of those occasions was he present in the starting line-up.

He was not the first star-in-waiting to struggle at Bayern. Others, including Mario Götze, have found it difficult to realise their potential in such a high-pressure, success-oriented environment. But it was inevitable that rumours would appear linking him with a move in a bid to reaffirm his talent this summer. 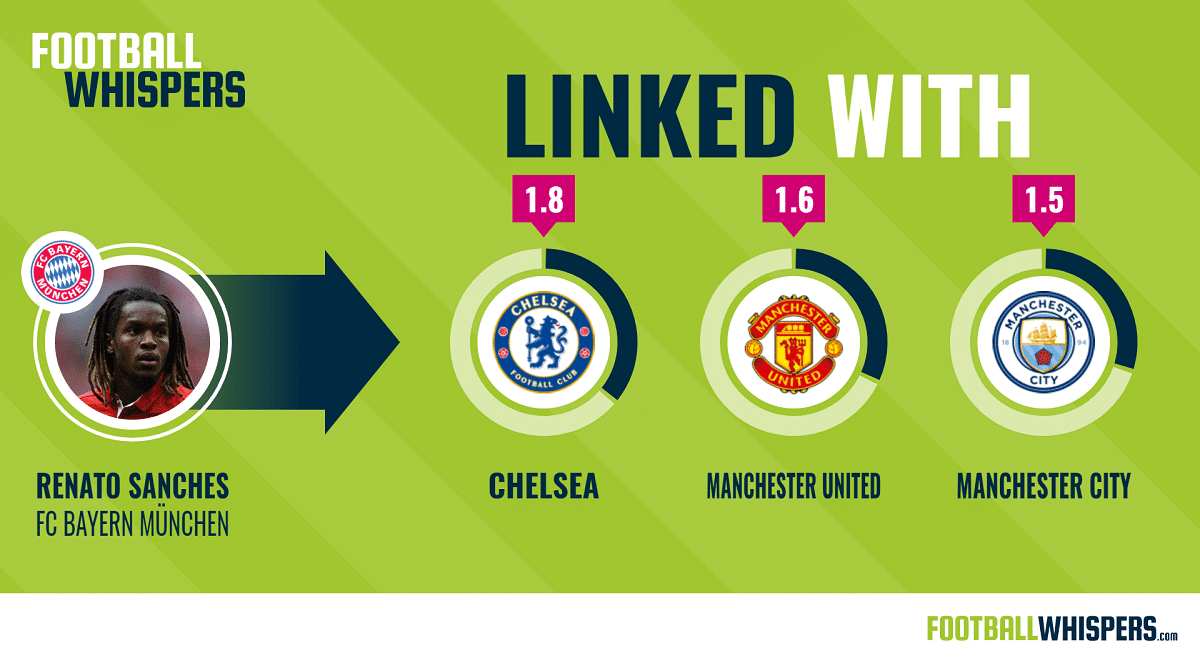 Sanches was reported as a Manchester United transfer target. His name also appeared high on the long and exciting list of AC Milan transfer rumours. But as yet a move to either, temporary or permanent, has failed to transpire. And Chelsea could take the opportunity to swoop in.

As it stands Chelsea are well-stocked for midfielders, especially considering Conte’s preference for a 3-4-2-1 system – a system which has, thus far, been the set shape for the team’s pre-season matches – which only requires two central midfield players.

N’Golo Kanté, last term’s Premier League Player of the Season, will now be joined by Bakayoko. And, as back-ups go, Nemanja Matić and Cesc Fàbregas are as good as they come. However, recently there has been speculation linking Matić to Manchester United.

If that move were to go through in the coming weeks, Conte would be left with three central midfield options. Alarmingly quickly, he would go from having the luxury of comfortable rotation within the 3-4-2-1 to being welded to the system for lack of viable alternatives – if , for instance, he were ever to experiment with the 3-5-2 that worked for him at Juventus, all three of his central midfielders would have to start.

WHAT SANCHES WOULD BRING TO STAMFORD BRIDGE

Sanches is surprisingly powerful for his height and age, and he can hold off the most attentive of markers with his upper-body strength. He also possesses sound technique and control under pressure. In recent friendlies for Bayern he has operated at the base of midfield, though with Corentin Tolisso having joined there is little room for him there.

His qualities would suit Conte’s central midfield two, not least because of the sheer lack of numbers in this area of the team. Most opponents pack their midfield with three, sometimes four players, meaning that numerical overloads in the centre are of real concern to Chelsea.

Sanches, both stylistically and positionally, is an ideal fit for the system, even if statistically he doesn’t quite measure up.

Sanches would perhaps be the most forward-thinking of the three were he to join. And, considering his proven ability and undoubted potential, a loan deal would present Chelsea with almost no risk. If the signing is truly possible, they should be determined to make it happen.