Renato Sanches’ move to Bayern Munich has not worked out. That much is obvious.

There was hope, when the 21-year-old returned to the club after a disappointing loan spell at Swansea City last season, that he might be reinvigorated, ready to step into the first team and live up to the undoubted potential he had shown at Benfica.

That, unfortunately, has not happened. Instead, Sanches now appears determined to leave the club, to ensure that a career of such promise does not go to waste.

“I think so,” Sanches, who has started just four Bundesliga games this season, told Bild when asked if he will seek an exit in the summer. “Whether a loan or a sale is better, we will see.

“Everyone knows I want to play more. Five minutes is not enough. To play is what I love. I do my best in every training session. The coach knows that. My team-mates, too. I always have to be ready and I'll do my best for those five minutes. I have self-confidence and I'm playing well if I get the chance.”

As he alluded to, chances have been rare for Sanches this season. His last start came in November, a 3-3 draw against Fortuna Düsseldorf, and his most notable contribution since is a red card against RB Leipzig in December having been introduced as a second-half substitute.

Sanches, as he has ever since his arrival in Munich, looks unsettled and out of place. Perhaps the move from Benfica – which cost £35 million plus add-ons – came too soon for the then 18-year-old.

He had excelled in Portugal and starred in the 2016 European Championships, too. But the expectation, when he made the switch to the Bundesliga champions, proved too much.

There have been occasional glimpses of his quality, brief cameos that have hinted at a possible future with Bayern. Early this season, in a home game against Augsburg, Sanches was his side’s standout performer, controlling things from midfield with a pass completion rate of 97.3 per cent. His strengths were on full show. 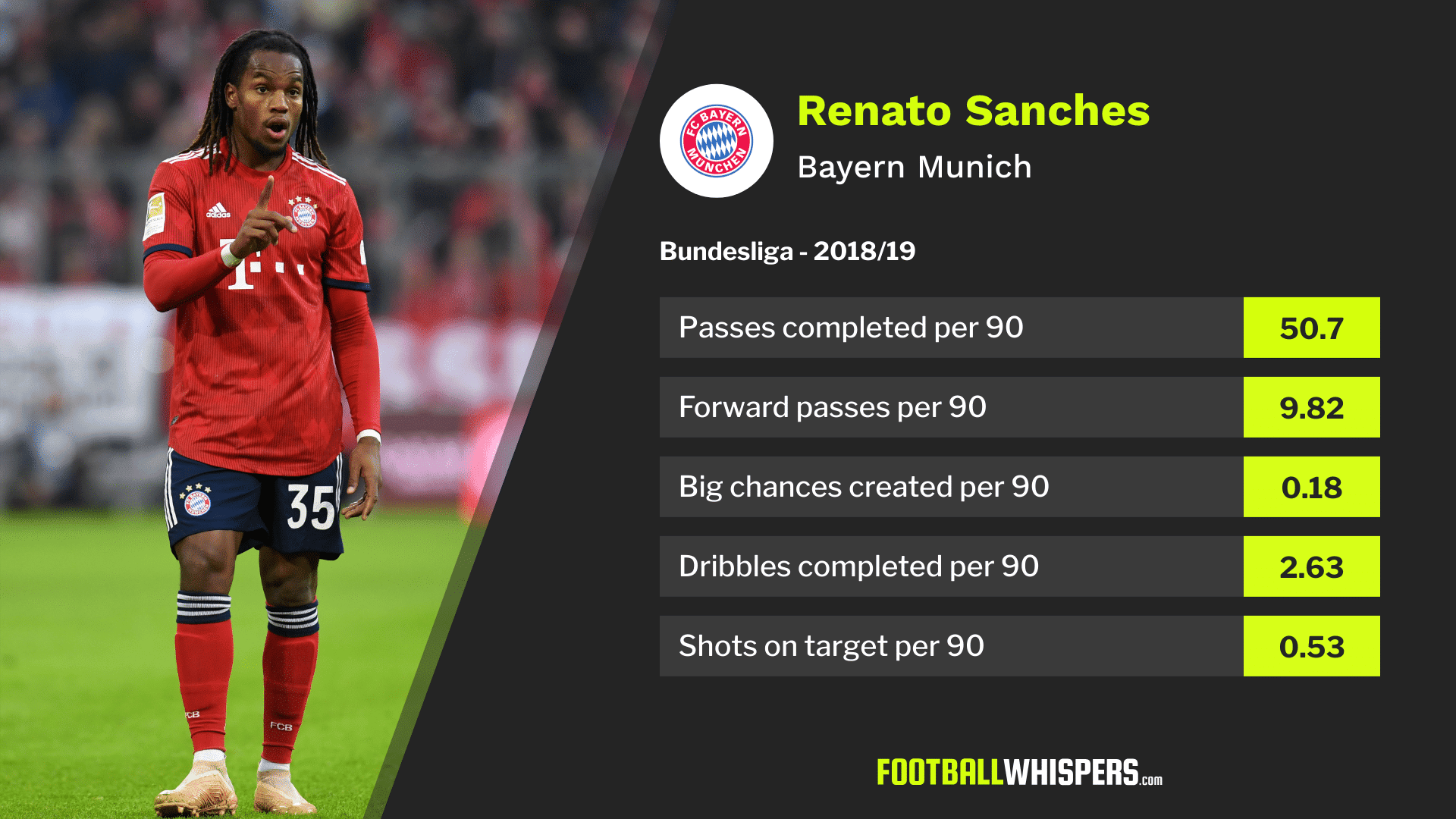 Mats Hummels described it as “an irresistible display”. “He’s all about power,” the Bayern centre-back added. “He’s someone in midfield who can give opponents the slip and run at pace with the ball. When he can do that then he’s incredibly valuable to us.”

There was still some hope for Sanches at that point. He had put in an even more impressive performance away at Benfica in the Champions League, scoring a superb solo goal in a 2-0 victory. It seemed all he needed was confidence.

That promising start to the campaign now seems a distant memory. Sanches has been frozen out; he is surplus to requirements and will almost certainly have to look elsewhere to avoid further derailment of his career.

“To be blunt, it’s not simple,” Bayern manager Niko Kovač said of Sanches after the youngster was given just three minutes as a substitute in last weekend’s 1-0 win over Werder Bremen. “He’s training diligently like all the others. We all have the responsibility — including him — to give our all. He has to wait for the situation in which I can play him. The team is set.”

As Sanches has pointed out, he is still young, still a player with plenty of time to develop and mature. The last few years have been a struggle, a test of his mental strength, but they will make him more determined to succeed if and when he is given another opportunity.

Where that will be remains to be seen. Liverpool, Atlético Madrid and Milan have all been linked with a move for Sanches, although any transfer is likely to be dependant on price. Clubs may be deterred, too, by Sanches’ poor form both at Swansea and Bayern over the last couple of seasons.

What is clear is that the Portuguese international is unlikely to have a future at Bayern. His recent comments, though understandable, will not have endeared him to Kovač.

The key for Sanches, then, is to find a club where he can feel settled, where he can progress as a player. Liverpool may be searching for a creative midfielder and might look to the Bayern man as a potential option. Or perhaps a move to Serie A will prove the best option.

“It's tough right now. But I still have 15 years left of my career. The future can be good,” Sanches said. “I do not know yet. We will see what is best for me. I just want to play.”

Sanches has not become a bad player overnight. If he gets his next move right, he could again be considered one of the brightest young midfielders in Europe. If he does not, he may spend the rest of his career wondering what might have been.