If a Hollywood studio were to adapt the story of Santos' remarkable 2002 season for the silver screen, here's how it would begin: open on the wild celebrations inside São Paulo's Morumbi stadium, the men in white jerseys unsure quite what to do with themselves, lost in jubilant celebration.

Focus would then train on the team's two teenage stars, 17-year-old Diego and 18-year-old Robinho. The pair are arm-in-arm, beads of sweat mixing with tears of joy.

At this point, the narrator would explain what had occurred minutes earlier, as Santos, led by a generation of gifted youngsters known as the ‘Meninos da Vila' – the children from Vila Belmiro, the club's stadium – had just been crowned champions of Brazil.

Rewind to the start of the season and we learn just how unlikely this triumph was.

Santos hadn't won the Campeonato Brasileiro since the great Pelé fired them to victory in 1968. And, forced now to rely on a cobbled-together group of academy graduates and also-rans, that drought looked certain to continue.

With prodigious striker Robinho the attacking focal point, Diego as the scheming No.10 and support coming from gifted midfielder Elano, enforcer Renato and flying full-back Léo, Santos were a thrill to behold during the 2002 season, if inconsistent.

They fared much better than many had anticipated, with their surprising form enough to earn them an eighth-place finish, thus qualifying for the championship play-offs. And then the magic began in earnest. 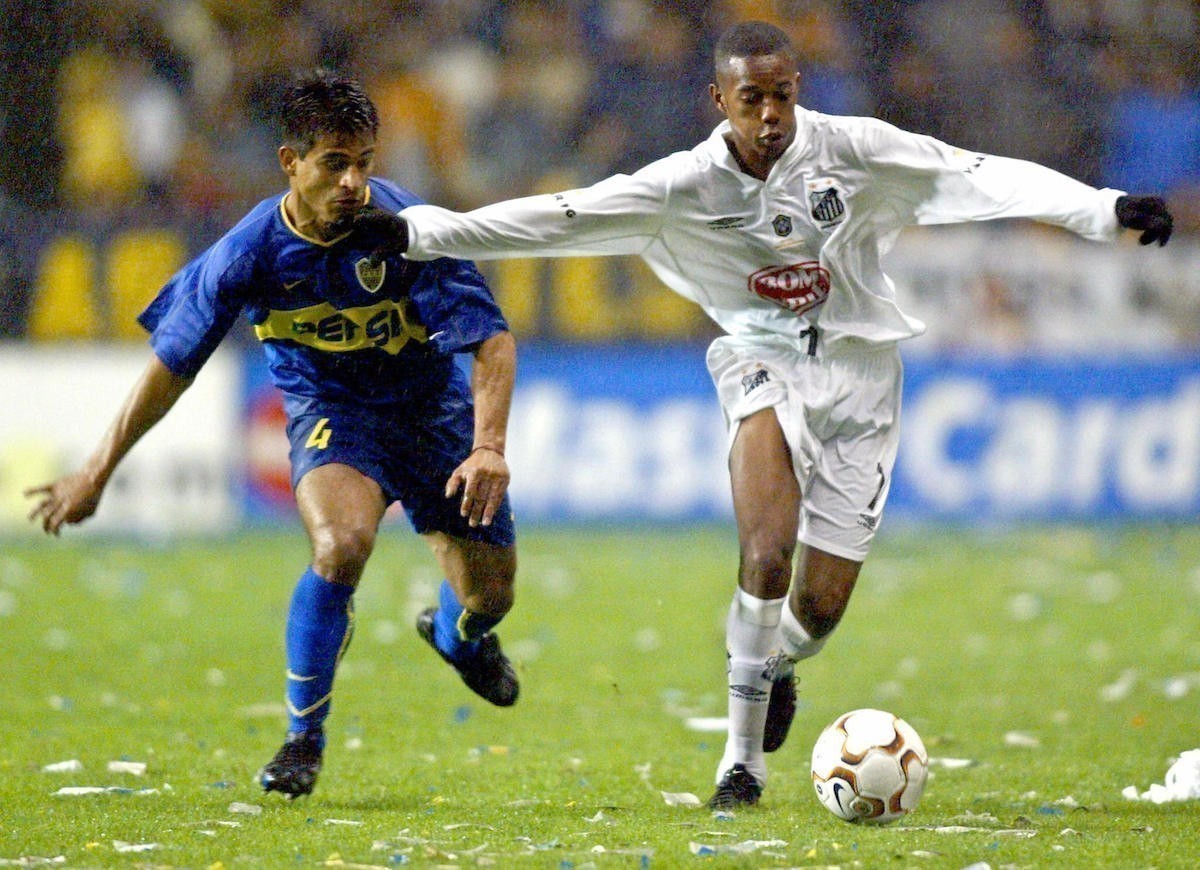 In the quarter-final, this merry band of upstarts, led by former national team coach Émerson Leão, saw off a supremely gifted São Paulo side which contained a 20-year-old Kaká, silver-haired playmaker Ricardinho and prolific striker Luis Fabiano. Grêmio were swatted aside in the semis, setting up a showdown with rivals Corinthians in the final.

Santos began the two-legged final with a 2-0 home win, with Robinho the star of the show yet again. And the return leg saw the youngster, by now hailed ‘the next Pelé', light up proceedings once more, memorably converting a penalty which he'd won by virtue of bamboozling his marker with seven pedaladas (step-overs), recalling images of that year's World Cup hero Ronaldo.

A 3-2 win at the Morumbi meant a 5-2 aggregate victory and secured Santos' unexpected, long-awaited title triumph.

The Campeonato's play-off format was abandoned for the first time the following year and Santos finished second in the more-straightforward league campaign. They were champions again the year after, though, with Robinho netting a career-high return of 32 goals.

In addition to finishing runners-up in the league in 2003, Santos also came agonisingly close to claiming a first Copa Libertadores crown since Pelé's side earned back-to-back continental championships in 1962 and '63.

Powered by the creativity of Diego and Robinho, and with future Valencia and AC Milan striker Ricardo Oliveira in particularly hot form in front of goal, Santos reached the final, only to be defeated 5-1 by Carlos Tevez's Boca Juniors over two legs.

Santos held on to Robinho as long as they could, rejecting European overtures until Real Madrid paid €24million for the attacker in 2005. After three seasons at the Bernabéu, he became the first marquee signing of Manchester City's Abu Dhabi ownership, moving to the Etihad in £32.5million deal.

Robinho twice returned to Santos on loan, either side of four seasons with AC Milan, and now plies his trade with Sivasspor in the Turkish Süper Lig.

But Robinho wasn't the only star of this Santos team. Indeed, many discerning observers rated the intelligent control and superlative technique of Diego even higher. The playmaker, now 33 and playing for Flamengo, went on to represent such European giants at Porto, Juventus and Atlético Madrid.

Right-sided midfielder Elano also left in 2005, treading a common path for Brazilians by signing for Shakhtar Donetsk, before moving to Manchester City in 2007, reuniting with Robinho a year later.

Combative midfielder Renato was a key figure in Santos's success during his first spell with the club between 2000 and 2004. His discipline and organisation in the middle of the park laid a foundation upon which the more creative stars could flourish. He enjoyed seven successful seasons with Sevilla in La Liga, finishing his career back with Santos via a stint with Botafogo.

Although remembered as a swashbuckling attacking outfit, this Santos side was not without defensive standouts. Léo was very much in the Brazilian mould as a forward-thinking full-back, but André Luis and Alex – later of Chelsea, AC Milan and Paris Saint-Germain – provided defensive steel.

As is often the case when a gifted crop of players emerges at a club residing outside of the mega-riches of Europe's major leagues, the best and brightest of Santos' 2002 and '04 title winners were picked off.

As such, there was never any hope of a dynasty being established, and it wasn't until Neymar broke through years later than the Peixe were able to repeat their early millennium success, with the flamboyant superstar helping finally end the club's wait for a Copa Libertadores title in 2011.

But memories of the 2002–04 Santos side endure for those who followed their rapid – and ultimately short-lived – ascent to the top of the South American game. They burnt brightly and never failed to entertain.

Freeze again on that image of Diego and Robinho embracing. Fade to black.