With Neil Lennon’s appointment as manager on a permanent basis made official, Celtic are now ready to do business in the summer transfer window.

Rekeem Harper’s name is one of a few that keeps on appearing in the gossip columns, with the West Bromwich Albion midfielder considered a potential long-term option in midfield.

The reigning Scottish champions have had their transfer policy questioned in recent years. During the Brendan Rodgers era there was more of an effort to sign players with experience at the highest level of European football, established domestic stars, and loan additions from top clubs.

Some of these additions, such as Scott Sinclair, worked out. Others, such as Marvin Compper and Youssouf Mulumbu, didn’t.

Before then, however, Celtic had a reputation for finding and nurturing young talent. And Harper, who has less than one full season’s experience of competitive football under his belt, certainly fits into this category.

Capped by England at both under-17 and under-19 level, the 19-year-old broke out at West Bromwich Albion in the second half of the 2018/19 season, asserting himself in midfield initially under the auspices of Darren Moore. Then, when Moore was replaced by James Shan, the youngster was rotated in and out depending on the opponent and the situation.

Generally, Harper played as a central midfielder in a two- or three-man midfield. However, he started his career as a striker and was only recently introduced to this role.

“I was scoring goals when I was younger but I just wanted to be on the ball a lot more,” he said in January. “Then (academy manager) Mark Harrison said to me ‘we see you as a midfielder.’”

Looking at Harper’s numbers, his more attacking background shone through in the fact he averaged 1.6 dribbles per game during his debut term in the Championship. This was more than all bar two of his teammates – Scotland international forward Matt Phillips and attacking midfielder Harvey Barnes, who was recalled by Leicester City midway through the season.

Not only did the 19-year-old get beyond his opposite man on a regular basis, but he scored his first goal for West Brom in the penultimate league game of the campaign. Drawing at home to Rotherham United, a loose ball broke to Harper on the edge of the penalty box and he duly fired home the winner with his weaker left foot. 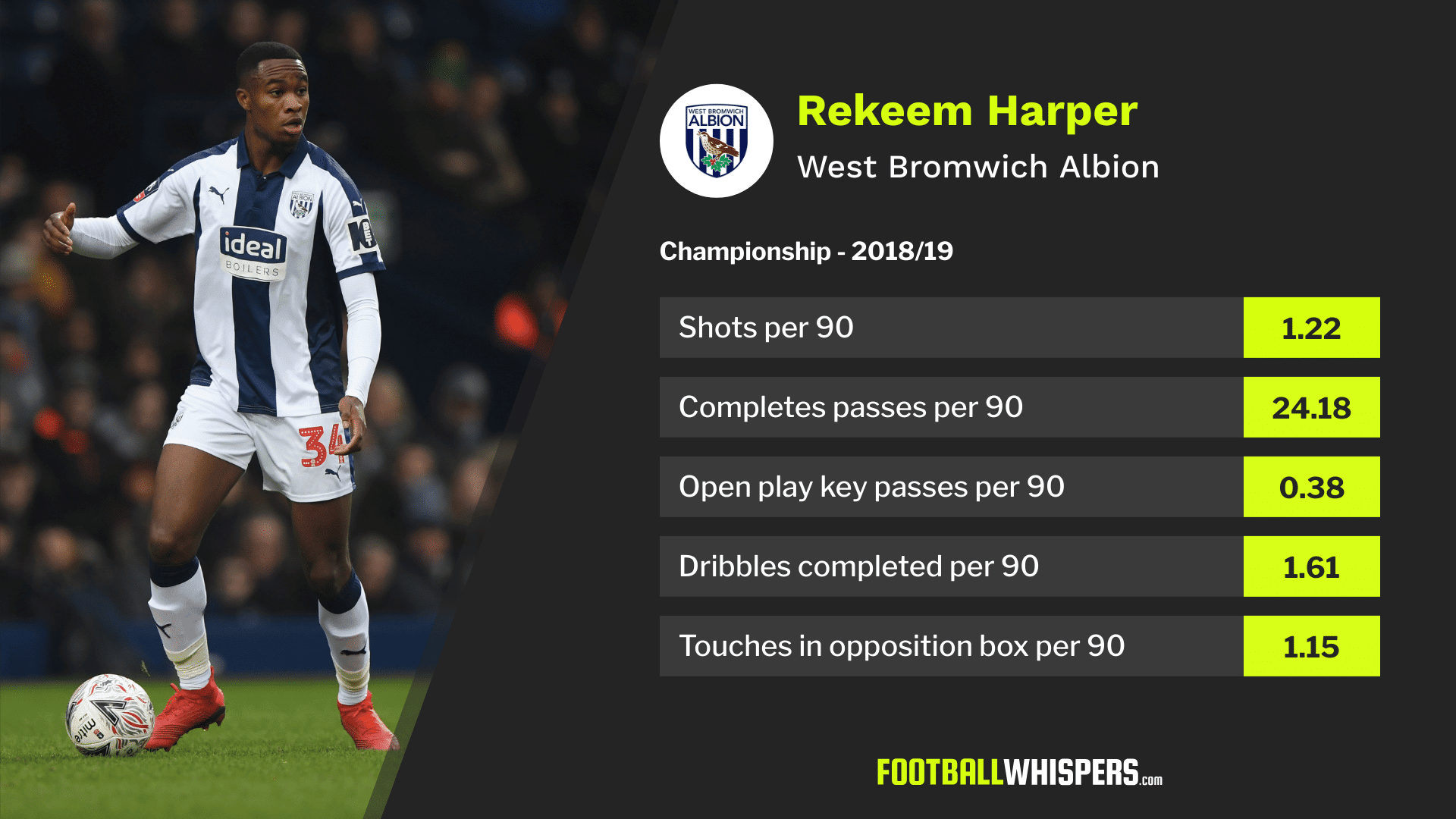 While a decent dribbler, there are other qualities that may have attracted Celtic to Harper. One of these is his good physical and aerial presence. Standing at 6ft, he is tough to knock off the ball, uses his body well to retain possession and is capable of winning headers and 50-50 challenges. These attributes may not be particularly exciting, though they are vital for midfielders operating in the Scottish top flight, where long balls and aggression are incorporated consistently by most teams.

Harper also has a good work ethic without the ball. When defending, he gets back into position quickly to ensure a compact team shape, and he is also keen when pressing the ball. This has always been something Lennon has looked for in his midfield. For every Ki Sung-yueng or Beram Kayal there has been a Scott Brown or a Joe Ledley, someone who would provide dynamism, energy and a combative spirit. Even as manager of Hibernian, he paired playmaker Scott Allan with the more forceful John McGinn.

Ultimately, though, Harper is a player that wants to get hold of the ball and make things happen for his team. This was underlined when Shan dropped him for tactical reasons, stating: “Rak is a powerful young boy, very good in the half-turn and he can play forward. He is probably more of an offensive midfield player than one that will sit in and screen and deny.”

Although not an ambitious passer, Harper constantly shows for the ball and aims to create connections between himself and his teammates.

He doesn’t look to penetrate defensive lines often – hence his rather low 0.38 open-play key passes average last term – but he doesn’t linger in possession, keeps the attack ticking and always finds a colleague, which explains why he had the (85.4 per cent) of any West Brom regular.

Competition for places in Celtic’s midfield is intense right now. Along with Brown, Nir Bitton and Eboue Kouassi should be fully fit next season. They will join the more creative Callum McGregor, Ryan Christie, Tom Rogic and Olivier Ntcham in vying for a starting berth.

Harper would have to fight for game time but he would offer an alternative to most of the existing options. Unlike Christie, Rogic and McGregor, who thrive between the lines in more advanced areas of the pitch, he is a natural box-to-box player who keeps things simple. He also offers more cut and thrust than Brown, Bitton or Kouassi.

Lennon has moved away from Rodgers’ 4-3-3 towards a 4-2-3-1 system with two players sitting at the base of midfield. This shape was on show as recently as the Scottish Cup final victory over Heart of Midlothian. Yet, with Brown ageing and other deep-lying midfielders suffering from recent injury issues or a desire to play further forward, there is a need for another more conservative option at Parkhead.

He still has a lot of development left in him but Harper would bring a good work rate, physicality, dribbling ability and efficient passing to Celtic. Not only would his addition improve the team’s midfield options, but it would be a sign of a more long-term-oriented transfer policy.