The Santiago Bernabéu has a capacity of over 80,000 but it can still feel like the loneliest place in the world sometimes.

Real Madrid fans demand only the best from their players. When their expectations aren't met, they have no trouble in voicing their discontent.

Gareth Bale has experienced this as much as anyone. There is little arguing with what the Welshman has achieved in the Spanish capital since moving from Tottenham Hotspur for a then world-record £85million in 2013.

On Saturday, when Madrid meet Liverpool in Kiev, Bale will be hoping to pick up his fourth Champions League winners' medal. Yet, for all the trophies he has won, Bale's time in Spain has not been without its snags.

Bale's five years in Madrid have been plagued by injury. He has also, at times, suffered dips in form. Whereas the deified Cristiano Ronaldo has earned the right to have the odd off game, there is nowhere for Bale to hide when things go awry.

That much was clear during the Champions League quarter-final second leg against Juventus. Leading 3-0 from the first leg, Madrid were in a seemingly unassailable position.

Bale, an unused substitute during that win in Turin, was handed a start by Zinedine Zidane in the return leg.

It ended badly. With Juventus threatening to pull off one of the great European comebacks, Zidane hooked Bale at half-time for Marco Asensio after the Bianconeri surged into a 2-0 lead.

Madrid survived the scare. Post-match, Zidane explained that he introduced Asensio because he felt the side needed “more energy”. It was not the most flattering reflection of Bale's contributions, given that he is a player renowned for his speed and direct running.

At that point, you would have been excused for believing Bale's time at the Bernabeu was coming to an end. Clearly out of favour under Zidane, the 28-year-old would perhaps return to the Premier League, with Manchester United and Tottenham as possible destinations.

However, it is to Bale's credit that he has rediscovered some of his most devastating form after that tortured 45-minute run-about against Juve.

Since then, Bale has scored five goals in four starts, offering exciting flashes of the electricfying winger we're accustomed to watching. As illustrated by the player persona below, Bale has been especially clinical in the past month, while he has averaged more on-target shots and has been creating more chances for his team-mates. 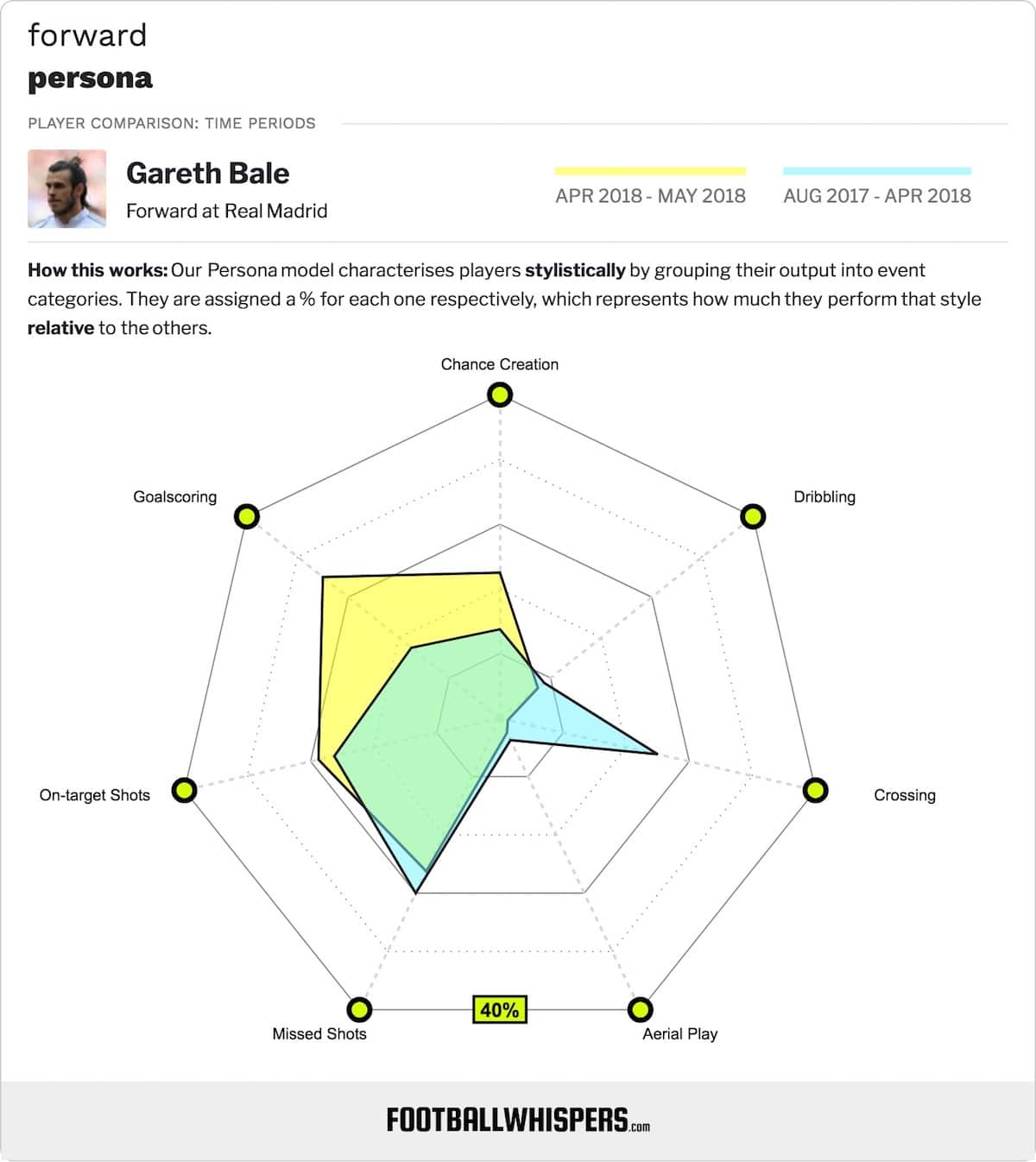 When Bale has started recently, it's been out wide, yet he has evidently been focusing less on crossing and dribbling and more on creating and finishing goal-scoring opportunities.

His finishing has been razor-sharp, too, like curling an unstoppable effort around Marc-André ter Stegen in the recent 2-2 draw with Barcelona.

Isco's excellent form coupled with the emergence of Asensio and Lucas Vázquez has combined to jeopardise Bale's place in the Madrid line-up but there are a number of factors that suggest he should start in the final.

Firstly, Bale's game is built on speed. There are few players as quick as the Welshman, either on the ball or off it, and that particular attribute would benefit Madrid on the counter-attack. It sounds like an obvious thing to say but, with Liverpool's natural inclination to pour forward in numbers, having Bale's pace on the break could be a decisive asset for the holders.

While still in remarkable shape for 33, Ronaldo is not as fast as he was in his youth and Karim Benzema is not the quickest. Isco, Toni Kroos and Luka Modrić – all of whom are expected to start – are wonderful creative players but are not blessed with blistering pace either.

Going up against a side who have conceded 13 goals in Europe this season, including four in the most recent outing against Roma, it seems obvious that a player of Bale's pace, technique and experience in tearing through defences should start.

Bale would fancy his chances against either Liverpool full-back. Trent Alexander-Arnold is quick but his defensive frailties were exposed against Roma while James Milner, although experienced and dependable, is only ever going to finish second in a foot race with Bale.

Bale may be suited to what is expected to be a quick, attacking game, but does he deserve to start ahead of the likes of Asensio and Vázquez?

Simply put, neither of them possess Bale's goal threat. The Wales international has made the most of another injury-hit campaign with 19 goals in 38 appearances. Bale's goals per game ratio in La Liga is 0.79 while Asensio and Vázquez have 0.29 and 0.21 respectively.

Strikingly, though, Bale towers above both players in the xG (expected goals) categories. Bale's xG is 9.27 and he boasts a hugely impressive post-shot xG of 11.63. Bale is comfortably outperforming his xG of 9.27 and xG per 90 of 0.46. 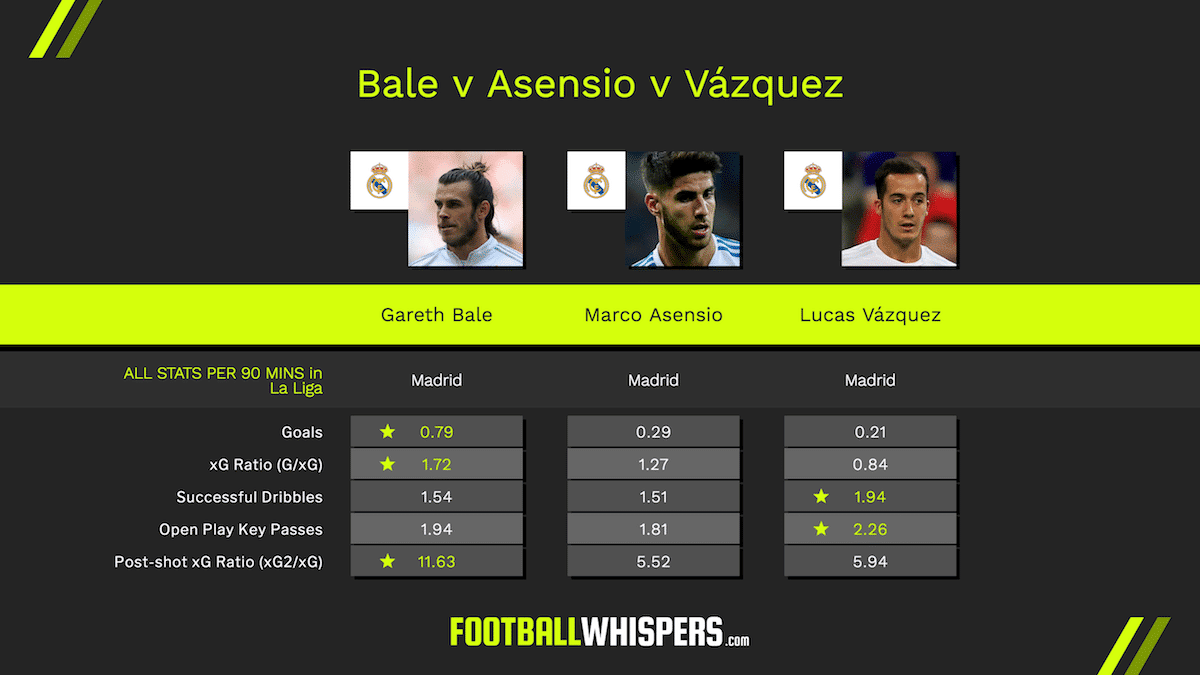 The former Spurs favourite spent 77 minutes of last year's Champions League final against Juventus on the bench. It would seem like a huge waste of Bale's current confidence and form for Zidane to do the same this time around.

Of course, there is a case against starting Bale. Benzema seems to partner Ronaldo more effectively, while Zidane could be tempted into viewing Bale as the perfect impact sub, a man whose searing pace could make a difference if the game becomes stretched in the later stages.

That would certainly raise a few eyebrows, though, especially if Madrid lose. It seems as though Bale has exploded into form just at the right time for Zidane and, while it's not beyond the Frenchman, it's going to take a bold move to keep the Welshman out of the starting line-up.