When it comes to producing and nurturing world-class talents, Brazilian club Flamengo have a serious claim to being one of the best around right now.

It was at the Estádio da Gávea that Vinícius Júnior rose to prominence and took his first steps in the senior game before he departed for Real Madrid in a move worth around £45million.

And a Madrid-based club could be set to raid Flamengo once again with neighbours Atlético interested in 17-year-old Reinier.

Reports in Spain claim it may take a bid north of £50million to convince the Brazilian side to part ways with the attacking midfielder. The table-toppers rejected a £35million offer from Everton in the summer and the belief around the club is the has more potential than Vinícius and former Fla star Lucas Paquetá.

Reinier, who only made his senior debut for the club in July, has he’s appeared eight times for the Flamengo first team yet has five goal involvements to his name, two of which are assists. His three goals showcase just how flexible he is as a player.

His first was a half-volley after an intelligent run from deep into the box. His second was a poacher's effort from close range. And his third was a header from close to the penalty spot.

None of these goals would usually be associated with an attacking midfielder. But the 17-year-old isn’t your stereotypical No.10.

He started life as a defensive midfielder, just as Roberto Firmino did, before coaches realised he could impact the game in the final third. However, because of his coaching at a younger age, he has defensive traits and is very effective for a high-energy, well-drilled team.

Standing at 6ft 3ins, Reinier has a physical presence which also aids his ability to drop into the middle third of the pitch. Often No.10s are too lightweight for central midfield battles but the Flamengo No.19 has no such problems.

The Brasilia-born youngster has a different dribbling style, too, which just so happens to be similar to that of Kaka’s. He doesn’t slalom past opponents but instead powers past them and into space. Yet despite this efficiency when it comes to ball use, he’s still got plenty of Samba flair.

You can tell exactly why Diego Simeone might be interested in adding him to his squad. Effective in one-on-one situations and tactically switched on enough to carry out team instructions.

He’s got that blend that all Atléti players seem to have. But it’s interesting to hear Reinier cite Zinedine Zidane as his footballing idol: “I’m heavily inspired by [Zinedine] Zidane. I’ve watched a lot of videos on the internet of him playing. I’m always trying to execute plays like he did.” 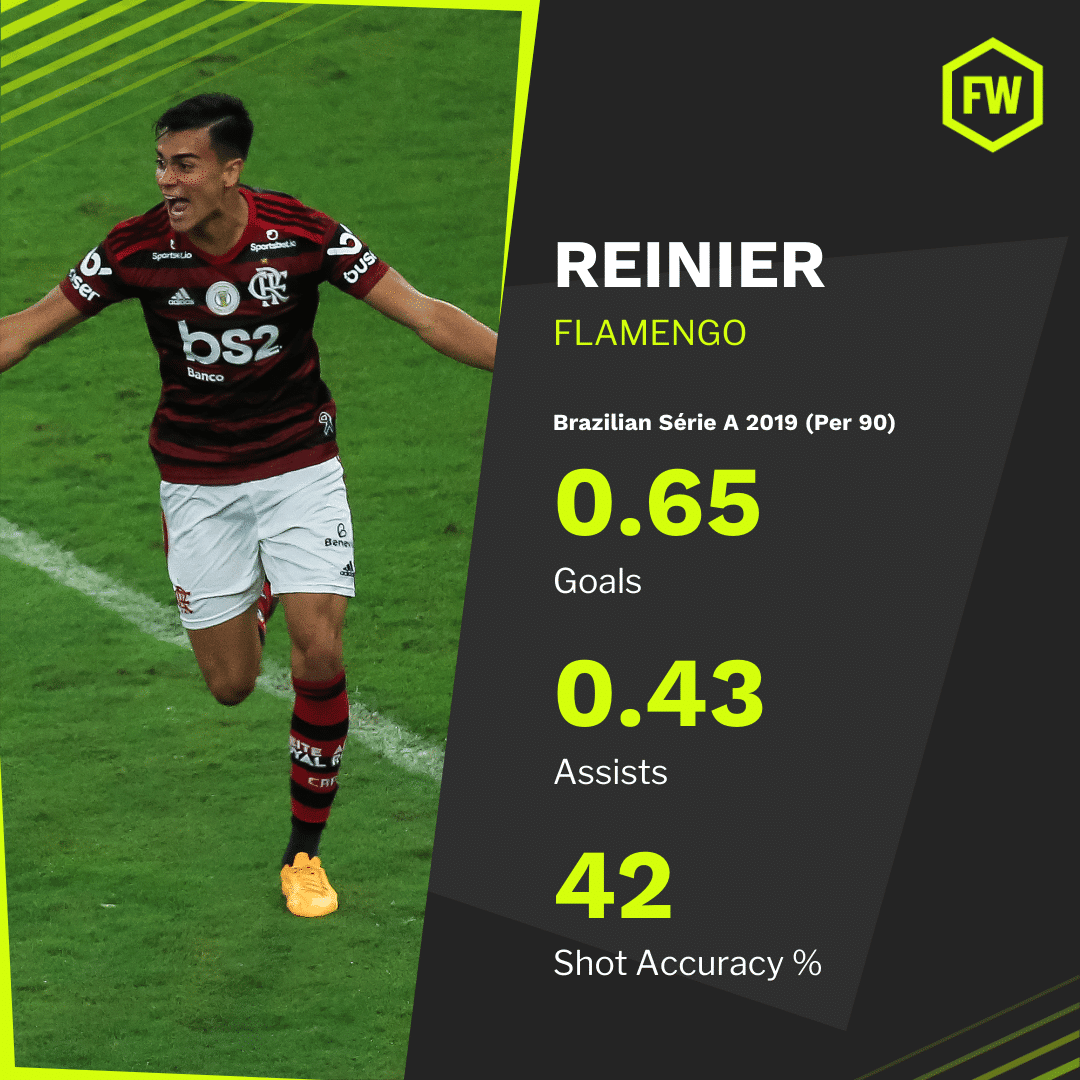 Stylistically, he couldn’t be further removed from the World Cup winner. Yes, both can manipulate the ball in ways you wouldn’t really believe but Reinier is by no means as flamboyant as the Frenchman was on a football pitch, at least not yet.

If he continues to catch the eye for Flamengo, Real Madrid and Barcelona may enter the race to bring him to Europe. However, he should still opt for a move to the Wanda Metropolitano. It’s the ideal environment for a player who is still developing.

Over the years, Atléti have helped nurture Fernando Torres, Sergio Agüero, Rodri and Antoine Griezmann to name but a few. João Félix made the move to the Spanish capital in the summer, entrusting Simeone with his development knowing full well he’ll get a tactical education under the passionate Argentine.

Far from the finished product right now, the thought of Reinier andFélix spearheading the Atletico attack in a few years is one that will excite those at the club, especially when you consider both Real Madrid and Barcelona have ageing attacks.