Manchester City romped to a 5-0 victory over Liverpool at the Etihad on Saturday, however the aftermath of the result has been dominated by the sending off.

The decision to show Sadio Mané a straight red card turned the game on it's head. City were 1-0 up at the time after Sergio Agüero took full advantage of poor defensive positioning to race through, round the on-rushing Simon Mignolet and pass the ball into an empty net.

The away side had been in control and were creating chances with relative ease. Jürgen Klopp had targeted Nicolas Otamendi at left centre-back and the Argentine picked up an early caution. Mohamed Salah spurned a gilt-edged chance when clean through but even then there was a feeling of inevitability that the Reds would grab an equaliser.

It looked as though the moment had arrived when Joel Matip clipped a long ball over the top and Mané took full advantage of a staggered City defensive backline to race through. City goalkeeper Ederson rushed off his line and it's 50/50 on who is going to get there first.

If Mané manages to knick it ahead of the City shot stopper then there's an open goal to fire into or, if he's caught by the former Benfica man, the home side are down to 10-men with Ederson being last man.

It's a risk for Mané but the reward makes it worth it. 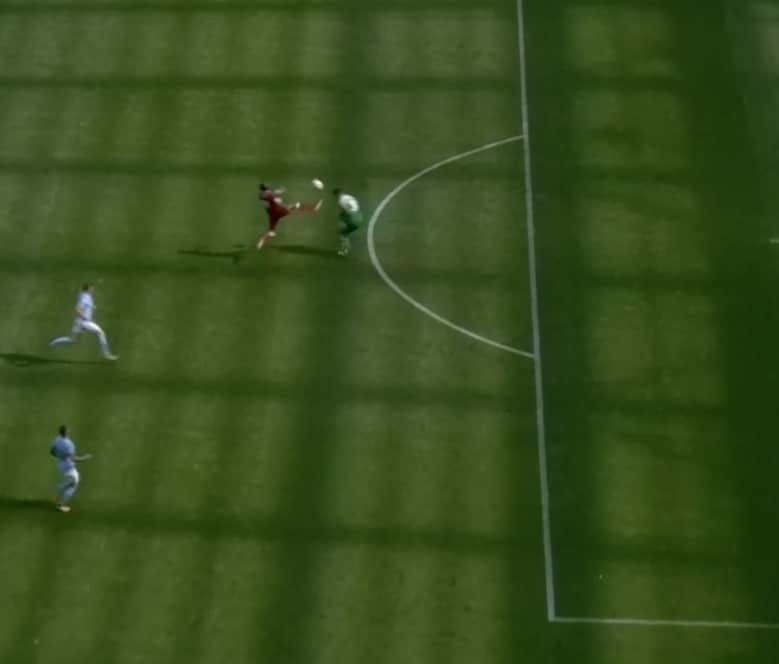 Unfortunately, however, Ederson stooped to head the ball and got there before the ex-Southampton flyer. For his troubles he took a boot to the face. It's an ugly collision and completely accidental.

Referee Jon Moss initially looked set to show a yellow card to Mané but upon seeing Ederson's face reached for a red and ordered the Liverpool player off for an early bath.

Moss seemingly punished Mané for the outcome as opposed to the actual event, something he's not supposed to do.

Former Premier League referee Mark Clattenburg, speaking on Norwegian television, thought Moss got the decision wrong: “No, his foot is raised to play the ball. His eyes are totally focused on the ball. A free-kick and a yellow card for dangerous play would've been the right call.”

Sky Sports pundit Gary Neville's claimed Mane's controversial sending off had opened a can of worms for referee. The former Manchester United right-back tweeted after the match that “the red card will have lasting implications. Mane's was a yellow and the injury was irrelevant”.

He then went on to add: “The red yesterday irrespective of which view you have will result in total confusion in the coming weeks and months on high boot challenges“.

Which is exactly what happened during Newcastle United's win over Swansea City on Sunday afternoon. Matt Ritchie picked up a caution after going in with a high foot on Swansea's Alfie Mawson. Thankfully, however, he didn't connect.

The Magpies went on to win 1-0 with Ritchie getting the assist. Had Moss been officiating the game he wouldn't have been on the pitch to create the goal. 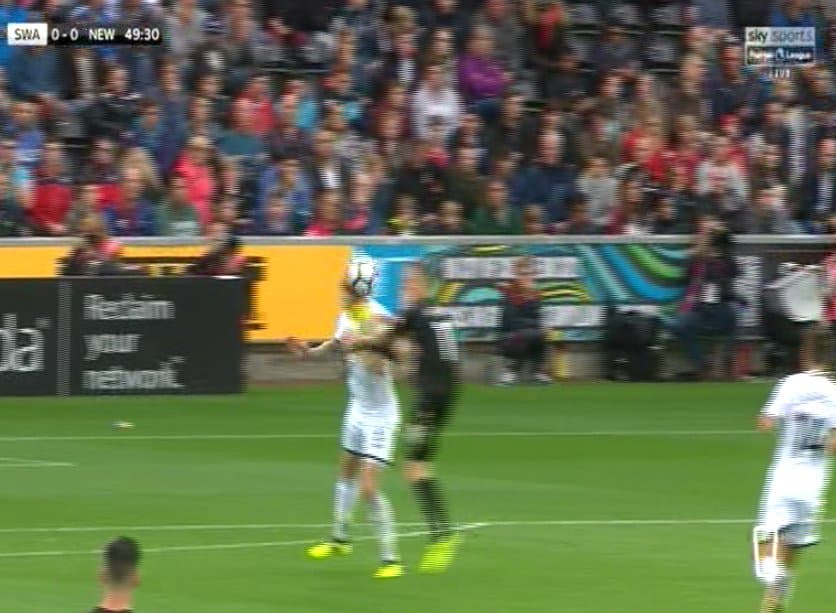 Afterwards Ritchie spoke to the press about the incident: “It was similar to last night but he [Alfie Mawson] came in a bit lower than the one last night, so I was lucky.”

Was Ritchie's foot really lower than Mané's? Furthermore, should it even matter?

According to the rules Moss was right to send the Liverpool player off. There's no mention in there of intent which was the argument many used to defend Mané on Saturday. Interestingly, though, there is no mention of needing to connect with the player for this to be serious foul play.

Yet referees only seem to act accordingly when there's a coming together. This leads to inconsistencies which in turn leads to the confusion you saw when Mané received his marching orders and Ritchie didn't.

The Newcastle United midfielder was lucky that Mawson was able to avoid his boot. However, Ritchie's actions still endangered the player and players will continue to make similar challenges knowing as long as they don't connect they're unlikely to be punished.

Referees are taking the easy way out by not making these tougher calls. In the City match on Saturday, Moss awarded Liverpool a free-kick for a high foot catching Mané. Yet no card followed.

Similiarly in the match between Liverpool and Arsenal prior to the international break, Hector Bellerin, as shown in the image below, leads with his studs as he tries to beat Salah to the ball. He misses the ball, and fortunately the man, and Liverpool go on to score.

The referee could go back and book Bellerin for this having played an advantage but doesn't. It's recklessly high given both men are off the ground as they challenge for the ball and the Arsenal full-back has very little control of his actions.

He's endangering Salah and, by the letter of the law, should be shown a red card for serious foul play. 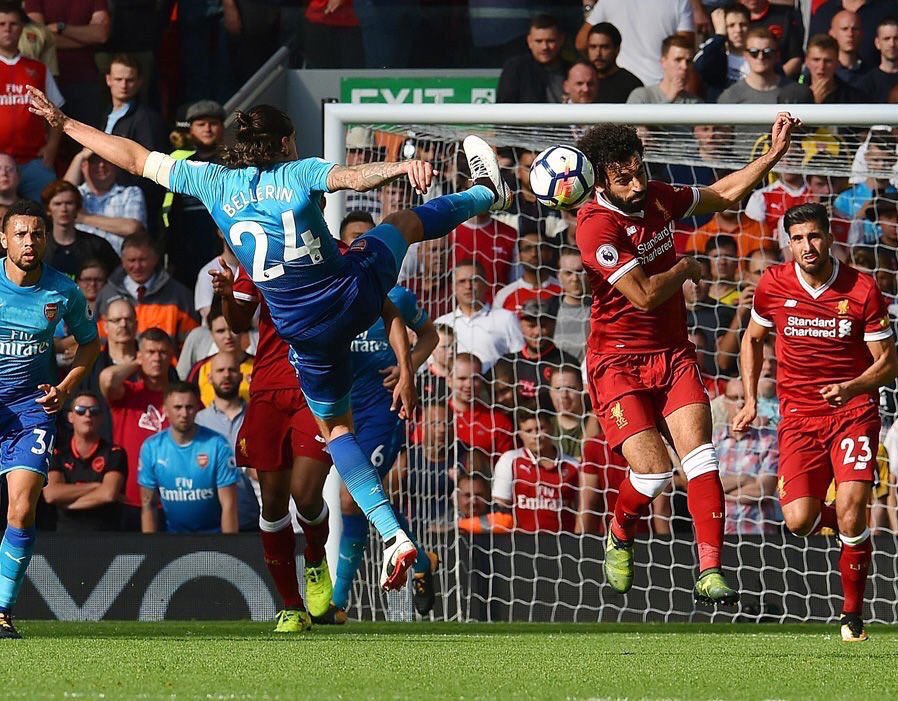 However, even when a player's foot connects with an opponents head there's no consistency from referees. Elias Kachunga escaped punishment for the foul on Chancel Mbemba which can be seen below. The Congolese international required treatment for the head injury sustained but Newcastle weren't even awarded a free-kick. 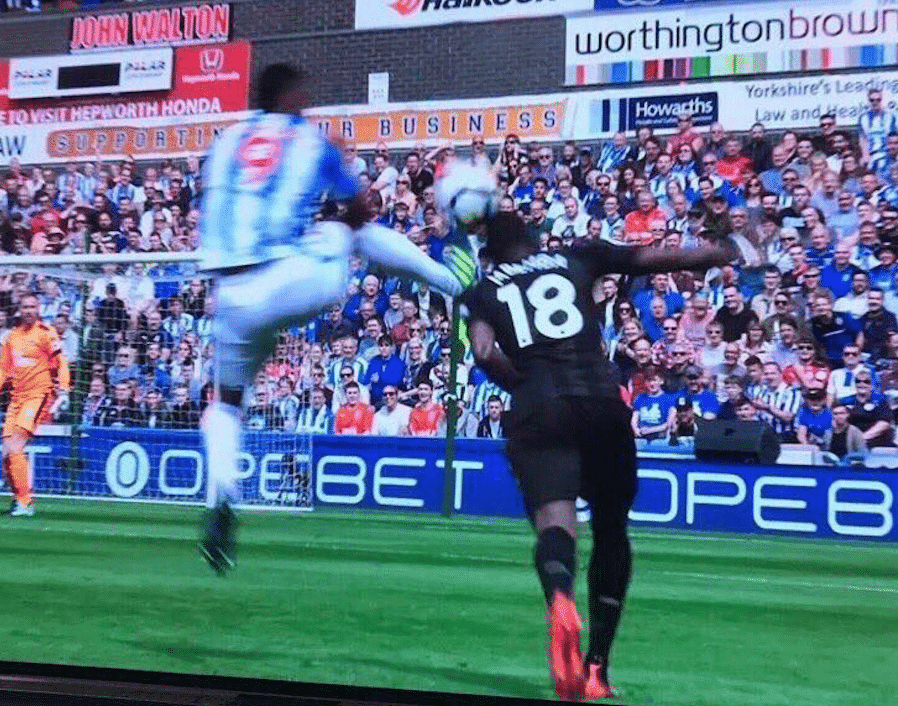 So how are players supposed to know what's legal and what's not if referees and paid pundits don't know themselves? Clattenburg disagreed with Moss. Jamie Carragher held a different view to that of his colleague Neville.

As Neville rightly points out, the injuries sustained are irrelevant following on from these high foots. Decisions are supposed to be made on the tackle alone. Whether a high foot connects or doesn't isn't important, the action alone is what's being judged.

Players can be sent off for sliding in with their studs on show even if they don't get near the player. There may not be intent but the reckless nature means it's serious foul play with the opponent at risk of a severe injury. Why isn't that rule enforced with high foots?

Is it not referees who are endangering the careers of players by allowing these incidents to go unpunished unless there's an obvious reason for them to intervene? FIFA need to ensure clubs, players and referees know the laws when it comes to these situations. There can't and shouldn't be any ambiguity.

Until there's an understanding of whether a high foot is a yellow card offence or a red one, players will continue to be in danger.