There is very little left to be said when it comes to Chelsea's development of young players.

Yes, the Blues have a quite brilliant academy, one that produces a host of talent every year. Yes, they subsequently loan a lot of this talent out. And yes, few are ever given the chance to prove themselves capable of playing for the first team.

“Realistically, to break into the Chelsea first team you need to have played 150 to 200 games at senior level,” the Blues' head of youth development Neil Bath explained in 2017.

“Someone like Eden Hazard had done that in France before coming to Chelsea so the reality is our young players will need to experience the same, which is almost three full seasons out on loan.”

There are, and should always be, exceptions to this rule. Callum Hudson-Odoi, for example, has been integrated into the first-team squad this season without having ever become a signed up member of the club's loan army.

Yet Chelsea's overarching policy is clear. For better or worse, they will push their players out on loan to see if they can thrive against seasoned, battle-scarred veterans.

Of course, the club has a duty of care. The Blues school their youth products expertly. Every drill carefully thought out. Every off-field need taken care of. By the time these players reach 18 years old, there are few more accomplished young footballers in Europe.

Yet no matter their technique, no matter their game intelligence, all it takes is one loan move to halt a youngster's development. There is no point, for instance, in a cultured midfielder signing for a club with a manager who wants to play ‘route one, win the second balls' football. Their progression will be stunted, their confidence dented.

Which brings us to Reece James, Chelsea's 2018 Academy Player of the Year. The then 18-year-old embarked on his first loan spell last summer when he agreed to join Wigan Athletic, who had been promoted to the Championship.

It was a switch that took the teenager out of his comfort zone. “I'm so used to London that moving away and living by myself was a bit of a change,” he admitted. “But after I settled I became more comfortable and started enjoying it a bit more.”

What will have helped is James went straight into Paul Cook's side. Nathan Byrne, the Latics' right-back throughout their 2017/18 promotion campaign, was shifted forward to accommodate the Blues youngster, who can also be used in central midfield or as a winger.

“He’s an 18-year-old boy but everything about the kid suggests he’s going to have a very strong career,” Cook told the Wigan Post in November. “His ability is only matched by his temperament and his attitude. If every 18-year-old conducted themselves the way Reece does, football would be in a good place.”

So what makes James special? Defensively he is sound – it should be noted he kept a certain Jadon Sancho quiet in Chelsea's FA Youth Cup triumph over Manchester City 2016 – and that is because of his composure.

The teenager doesn't dive into challenges, doesn't step out of position to try to intercept passes he shouldn't. He is disciplined and aware of threats around him.

Like many modern-day full-backs, it's the attacking third where James comes into his own. He is an excellent crosser of the ball – arguably the best in the Chelsea ranks – which is why his 0.22 big chances created per 90 is only bettered by three other Championship defenders. 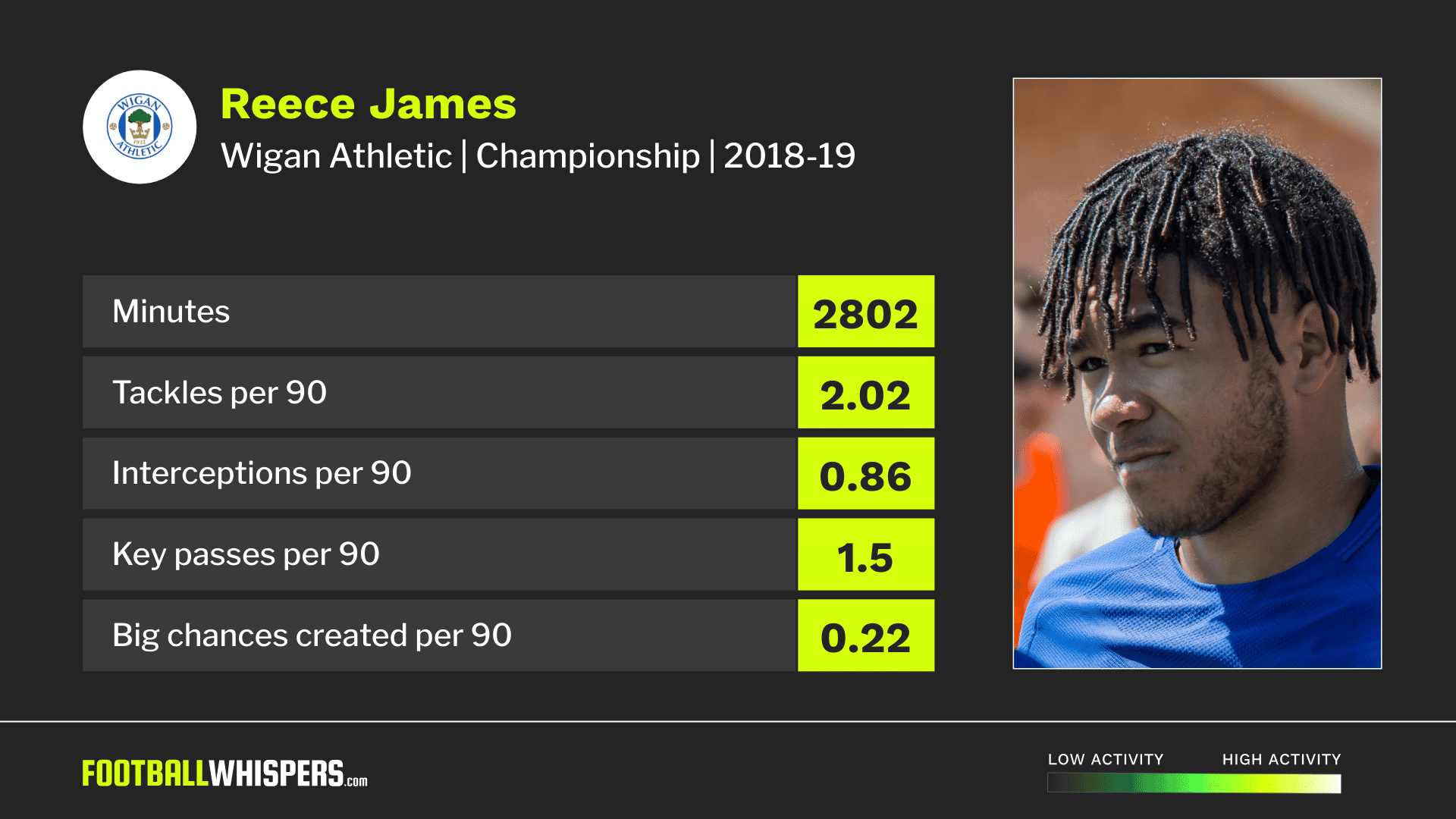 How he manoeuvres himself into the final third is different to most, though. James, when in possession, often underlaps his winger and breaks between the line of defence and attack, which in turn opens up passing avenues many full-backs are not presented with.

He can go down the flank if needed, however. And he does this via skill and nous rather than blistering pace.

Such has been James' impact at Wigan that he was named the club's Player of the Month for September. And October. And November.

“He's Player of the Month every month… and he's the man of the match almost every week,” Cook said. “There's nothing else I can say about him. He's as good a lad as he is a player.”

In January there was interest from several Premier League clubs in James, many of the Championship promotion chasers also attempted to lure him away from the DW Stadium.

Chelsea allowed the teenager to choose his destiny, and he opted to remain with Wigan until the end of the campaign.

“It was a big decision for him to stay with us,” Latics skipper and former Manchester United midfielder Nick Powell said. “Especially given he had opportunities to go to the Premier League and the top end of the Championship.

“He’s taken everything in his stride and there’s very little I can say to him, he’s talented beyond his years and if he doesn’t play for Chelsea it’d be a huge upset because he can play in the Premier League and at international level.”

James has been moved into midfield this month, and while not as accomplished in the role it's telling Wigan haven't lost either of the games in which he has protected the side's back four.

He will return to Chelsea in the summer having proven he can handle the rigours of senior football. Is he ready for the Premier League? Most definitely. Is he ready for Chelsea? Perhaps. Will he be given an opportunity? History suggests no.

And that would be folly from the Blues. Current right-back César Azpilicueta is far from the force of old. Now 29 and having racked up almost 150 games since the summer of 2016, he can no longer, effectively at least, play three games a week.

James would be the ideal deputy. An effective alternative. All he needs is the chance to prove it.