During the course of this season, almost every Chelsea youngster has had a coming-of-age performance in a Blues shirt.

Mason Mount‘s was against Leicester City. Tammy Abraham‘s came at Wolverhampton Wanderers. Fikayo Tomori starred up against Mo Salah when Liverpool visited Stamford Bridge. And Christian Pulisic – although not an academy graduate – shone at Burnley.

At the weekend it was the turn of Reece James. The 19-year-old full-back was handed his first Premier League start against Crystal Palace just days after he came on and scored in the dramatic 4-4 draw against Ajax.

Up against Wilfried Zaha, one of the top-flight's trickiest wingers, James, who has been nicknamed The Beast by team-mate Mount, wasn't handed an easy first assignment by Frank Lampard. Yet he passed it with flying colours.

The Ivorian's threat wasn't entirely nullified – he completed the most dribbles of any player (6) – but what James did was manage these dribbles and ensure they didn't hurt Chelsea.

The Chelsea defender confined Zaha to the left flank; he was unable to break into the Blues' penalty area with the ball. The Palace star has averaged 6.47 touches in the opposition box per 90 this term but at Stamford Bridge that was reduced to just three.

Zaha also didn't register a single shot, didn't create a chance for a team-mate, completed just six passes in the final third, and saw his touches per 90 drop from his season average of 57.64 to 43.

Of course, not all that is down to James.  Chelsea dominated much of the contest and Zaha was starved of service. But when he did receive the ball, the Blues No.24 was always in close proximity ready to make a challenge or halt a run forward. 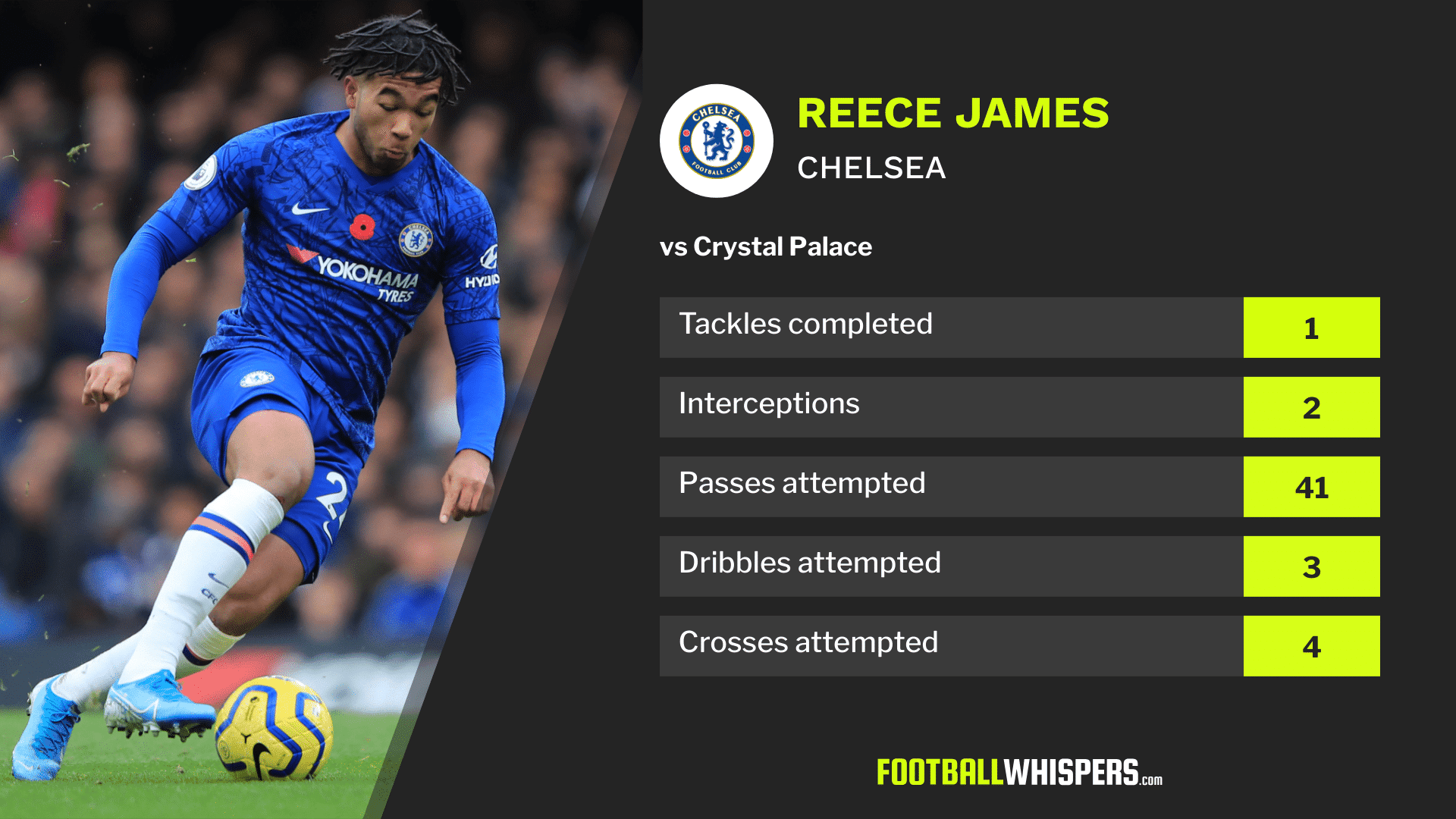 Yet it wasn't only defensively that James stood out, he also made an impact in the final third. And it's this aspect of his game which is why many Chelsea fans feel he may soon oust club captain César Azpilicueta from the starting XI.

The defender is a Blues icon. He has won Premier League titles, an FA Cup, and the Europa League. He is also one of the most durable players to have ever played for the club. Week in, week out, Azpilicueta is fit, available and reliable.

Yet it's always been the case that the now 30-year-old is more comfortable in his own half than in the opposition's. In the modern game that can be a problem, especially against opponents who sit deep, soak up pressure, and play on the counter.

Full-backs have become a vital component in breaking these sides down – think Liverpool's Trent Alexander-Arnold or Andrew Robertson – and Azpilicueta can cross a ball well from deep areas of the pitch. But he doesn't have the dynamism to break into the final third and impact the game on a consistent basis.

James has that ability and he will only refine it the more game time he is given. Against Palace, he completed all three dribbles he attempted, his strength on the ball enabling him to brush off opponents with ease. He also completed eight final third passes from twelve attempted and it was his cross that led to Chelsea's best chance of the first half.

It's a testament to James' character, mentality, and self-belief that he was able to slot into the Chelsea side so seamlessly against Palace. Yet those who know the full-back, and those who worked with him at Wigan Athletic last season, would not have been surprised.

“You see a lot of young kids going on loan now and sometimes, it’s a shock to them what men’s football is really like,” Wigan's Nathan Byrne told The Athletic in September.

“They have a struggle adapting but Reece just stepped in and started doing his thing. He didn’t take any time to settle. He just got on with his work and was impressive all season.”

No time needed to settle. Straight into the team and impressive. It all sounds familiar, doesn't it? And if James continues in the same vein, it won't be long until he becomes a regular fixture in the Blues team alongside Tomori, Mount, Callum Hudson-Odoi and Abraham.