It would be safe to say that Southampton have enjoyed a mixed start to the new Premier League campaign.

A goalless draw with Swansea on the opening day was far from ideal, but with a whopping 26 shots on goal, there were reasons to be optimistic.

Mauricio Pellegrino’s men followed that up with a 3-2 win at St. Mary’s and everything looked brighter on the south coast.

Yet, another 0-0, this time against Huddersfield, although a good point against a team who has started well, would have been worrying due to the fact the Saints only managed six shots throughout the whole game.

More worrying was the fact that Manolo Gabbiadini – their star striker – only managed to fire off a single shot.

When you look at how the Italian scores his goals, he thrives on service. His best work comes off the ball. You could see that from his strike against West Ham. The 25-year-old started the move and made a great run before being slipped in by Nathan Redmond to fire home the low finish.

However, that is a feature of the Saints play we’ve not seen enough of this season.

Redmond is a great threat out wide, but the 23-year-old has shown a tendancy to be a little greedy this term, or just make the wrong decision when in the final third.

During the Huddersfield match, it was the former Norwich winger who took 50 per cent of the team’s shots. Gabbiadini had just one.

With 27 minutes left on the clock and the game tied, Redmond had the ball 25 yards from goal and you can see from the graphic below, that although he isn’t being closed down, the Italian striker is praying the pass is slipped outside the defender. 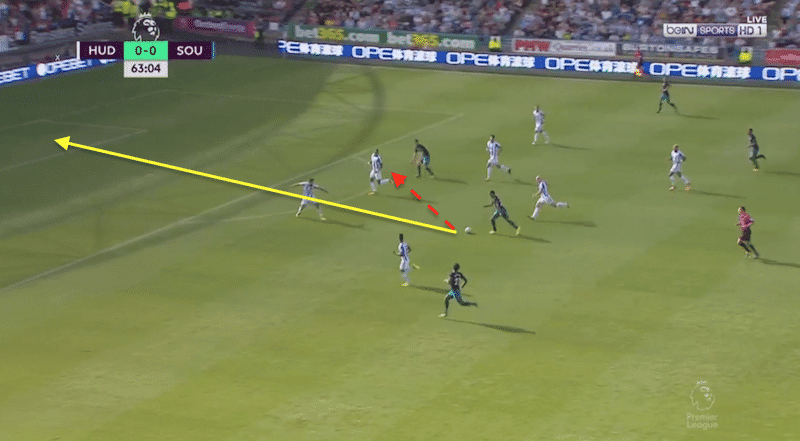 The shot is weak and doesn’t threaten the goal, and Gabbiadini makes it known he’s not impressed.

If it was a one off occurrence, no issue, but it happens quite often when the winger gets into a good position outside the box.

Into the last few minutes of the win over West Ham, with the game tied, Redmond tries to work space, but with pressure coming and going backwards, he still fires off a shot.

It hits the bar, but the ball was on the way down, rather than coming off the underside. Saints had players in the box, options for him to hit. 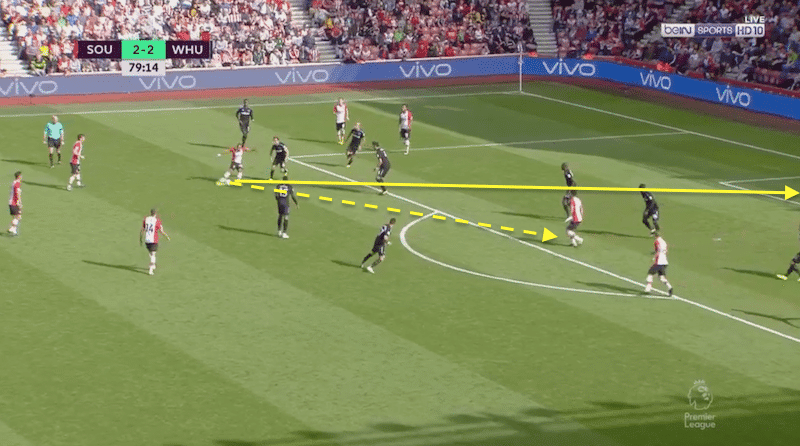 No surprise that Redmond leads the Saints starters in shots per 90 minutes with 3.7 – 2.3 of them are from outside the box and just 0.7 of those are on target.

Gabbiadini is next with 3.3, but with just one against Huddersfield, Pellegrino needs to emphasise the need for Redmond and the other midfielders to get the ball to the Italian in order to make a difference.

Only James Ward-Prowse makes more key passes per 90 minutes, with 3.8 compared to 3 – and he sees more of the ball than Redmond. The 22-year-old completes 47.7 passes compared to the winger's 35.

However, it's the what he does with the ball that you would like to see Redmond adjust. Rather than shoot – although he still attempts 3.1 shots per 90 – Ward-Prowse looks to cross first and he leads the team with 10.9 attempts.

On the flip side, Redmond only attempts 1.4 crosses per 90, hitting the target with 0.7. It's the older wide man who gets the ball in the most dangerous positions and to progress into a player who can make the difference on a consistent basis, he needs to improve his decision making.

Playing against Watford on Saturday, they will have a chance to pick up another three points at home. However, if they can’t create more opportunities for the former Napoli forward, it could be a long day at St. Marys.