Red Star Belgrade take on Pyunik in the Champions League qualifiers on Wednesday, August 3rd. Can Red Star live up to their favourites tags against Pyunik this week? Read our free predictions and find the latest odds for the fixture below in our detailed match preview.

Red Star Belgrade will fancy their chances of building a strong first-leg advantage when they take on Pyunik in Serbia on Wednesday. Read our top predictions for this week’s fixture below.

Dejan Stanković’s formidable Red Star Belgrade have started the new Serbian domestic campaign in typically devastating fashion, claiming a maximum 12 points from four assignments so far. Red Star conceded just a single goal in that quartet of contests and their ability to keep the door firmly shut at the back could allow them to secure another shutout against an inexperienced Pyunik outfit this week. As a consequence, backing the hosts to win Wednesday’s first leg appeals at the prices on offer.

Milan Pavkov has long been a reliable source of goals for Red Star Belgrade and the attacker has already notched an impressive five times in just four appearances this term. The prolific 28-year-old is on a four-match scoring streak and the expert finisher has the confidence to do some more damage against Pyunik on Wednesday. With that in mind, Pavkov is an outstanding candidate in the anytime scorer stakes in Belgrade.

View our list the top stats for Wednesday’s match below alongside a tool to help you choose the best odds.

Read all of the latest injury updates and team news for Wednesday’s fixture between Red Star Belgrade and Pyunik in the Champions League qualifiers below.

Red Star Belgrade have close to a full squad to choose from this week, with defender Radovan Pankov their only reported fitness concern. Red Star warmed up for Wednesday's game in style by thumping Radnik Surdulica 6-0 on Friday and they sit top of the Super Liga table in Serbia with a perfect record after four fixtures.

Pyunik did well to eliminate Luxembourg's F91 Dudelange in the previous round of the qualifiers, though they were turned over in their first domestic match of the new campaign shortly after by Ararat. A more familiar XI should take the field on Wednesday however, and Head Coach Eghishe Melikyan has few injuries to worry about. 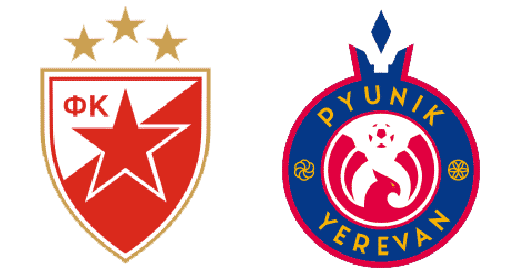 This will be the first-ever competitive clash between Red Star Belgrade and Pyunik.

Red Star Belgrade vs Pyunik is not being screened live on TV.